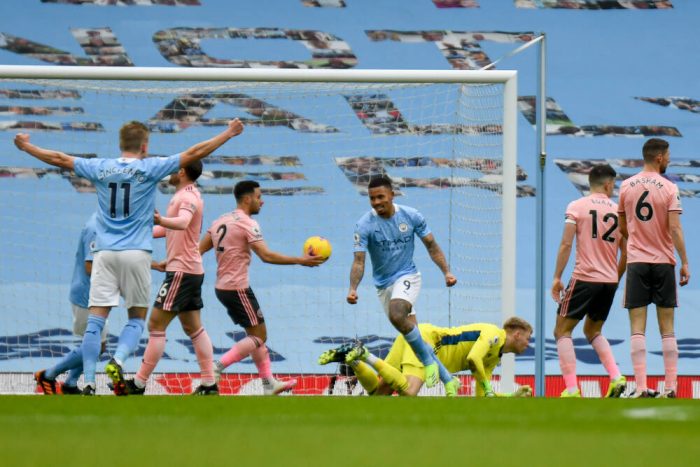 Manchester City made history this week by becoming the first side in the English Premier League to win nine games in a row in January, beating West Brom on Tuesday night and Sheffield United on Saturday. As a result of their formidable form, they moved top of the Premier League for the first time this season. The two very different victories were demonstrative of the title credentials that City currently boast: thumping West Brom 5-0 away from home before grinding out a hard-fought 1-0 win against United. Central to their form has been the renaissance of İlkay Gündoğan who has scored four goals in his last four appearances, playing in place of the injured Kevin De Bruyne for the final two. City, now with a game in hand, hold a three-point advantage over Manchester United in second place. West Brom and Sheffield United, however, remain rooted to the bottom of the table, nine and thirteen points away from safety respectively.

City were given a helping hand to the top of the table thanks to the downturn in form of cross-city rivals, Manchester United. For most of January, United were riding high at the top of the table, but a shock home loss to Sheffield United and a drab 0-0 draw away to Arsenal means they lose ground in their hunt for a first Premier League title in eight years. And it won’t get any easier for United in the coming weeks, with difficult tests against Southampton and Everton in the next six days alone.

Liverpool looked to be back to their best this week, claiming two landmark victories against Spurs and West Ham. Winning both away games with convincing 3-1 margins, Liverpool have seemingly cast off the shackles of their recent poor form, scoring more goals in the last two games than in the whole of January. Spurs’ form, on the other hand, has fallen off a cliff in recent weeks. Just two wins from their last eight Premier League games has seen them slip from top of the table in mid-December to sixth just seven weeks later. This dismal run was capped off by Sunday’s 1-0 loss away to relegation-threatened Brighton. A heroic defensive display from the Seagulls made the difference in the end as they rounded off a January that Spurs fans will surely want to forget.

There were also victories for Leeds United and Chelsea. Leeds travelled to the East Midlands on Sunday afternoon to face a Leicester side full of confidence. But despite taking the lead on the 13th minute, the Foxes were cut apart by Leeds from start to finish, eventually losing 3-1 and slipping down to fourth in the process.

Chelsea registered their first victory under Thomas Tuchel, who took over at Stamford Bridge following the departure of Frank Lampart last week. Stylish goals from Ceasar Azpilicueta and Marcos Alonso, making just their eleventh and fifth league starts respectively, sealed the win for Chelsea, taking them up to seventh in the table.

Brighton have finally got a win at home this season ✅

Atletico Madrid moved ten points clear at the top of La Liga after they beat Cadiz 4-2 away from home. It took just under half an hour for the visitors to take the lead, with the indomitable Luis Suarez firing Atletico ahead with a wonderful free-kick. Just seven minutes later, however, and Cadiz were back on level terms via a fine left-footed finish from Alvaro Negredo. Saúl was able to put the Atletico back in front just before half-time, but not without a bit of luck. Thomas Lemar’s right-sided free-kick cannoned off the Spanish midfielder and looped into the net, leaving the sprawling Jeremias Ledesma in goal with no chance.

Suarez looked to have the game wrapped up just minutes after the restart, scoring from the penalty spot following a late challenge on Thomas Lemar. But Negredo once again rolled back the years, somehow managing to slice a shot past the helpless Jan Oblak to bring Cadiz within touching distance of the league leaders. As a testament to their title credentials, however, Atletico killed off any chance of a dramatic comeback when Koke slotted home Angel Correra’s slide-rule pass. The win now means that Atletico have won eight in a row, a feat they haven’t achieved for seven years.

Barcelona are Atletico’s nearest title challengers and are on a run of nine games unbeaten in the league, with their latest victims Athletic Bilbao falling to a 2-1 defeat. But despite Messi scoring his 650th goal for the club, the Blaugranes look miles away from reclaiming the top spot. And when you take into account Atleti’s game in hand, the 10 point gap between the two sides becomes a yawning chasm. And with just 10 goals conceded all season, it looks unlikelier by the day that anyone will surpass Diego Simeone’s men.

8 – @atletienglish have won their last eight league games, their best streak since March-April 2014 (nine victories in a row), the season when they claimed #LaLiga Champions for the last time. Accelerate#CadizAtleti #CadizAtletico pic.twitter.com/EFv7MurJJM

Real Madrid seemingly surrendered any hope of retaining the title when they were beaten 2-1 by Levante on Saturday. Madrid were at a disadvantage almost immediately following the dismissal of Eder Militão on the ninth minute. Just four minutes later, however, Marco Asensio had given Madrid the lead, charging down the length of the Levante half before cooly slotting past the keeper. But Levante were back on level terms by the half-hour mark as Jose Luis Morales’ smart half-volley nestled in the top corner of Thibaut Courtois’ net.

Come the second half, it seemed for all the world that Levante had thrown away their chance of a famous victor when Roger Marti’s penalty was saved by Courtois. But in the 78th minute, he made amends with a stylish turn and finish that would give Levante both the lead and the victory.

Elsewhere, Real Sociedad drew 1-1 with Villarreal, a result that leaves the Basque club in sixth place, seven points away from Champions League qualification. Imanol Alguacil’s men started the season well, comfortably holding a top-four spot for over eleven weeks. But just one win in their last eight league games has seen them slide down the table and further away from their dream of Champions League qualification with every passing week.

1 – @LevanteUDen's Paco López is one of the three managers to win twice against Real Madrid under Zinedine Zidane in LaLiga (Pablo Machín & Quique Setién) and the the first manager to record an away league win at Santiago Bernábeu and el Alfredo Di Stéfano. Master. pic.twitter.com/S1GpBMB6sj

Dortmund returned to winning ways this week, beating Augsburg 3-1 at the Signal Iduna Park. The win follows a run of three league games without a win, a run that has also seen them give up any reasonable chance of claiming the Bundesliga title. But with Champions League qualification still an achievable target, Edin Terzić’s men are approaching the remainder of the season with renewed vigour. Augsburg took the lead early on through Andre Hahn, but it wasn’t long before Dortmund were back level courtesy of Thomas Delaney. Jadon Sancho gave the hosts the lead in the 63rd minute before an own goal from Felix Uduokhai rounded off proceedings. The win now leaves Dortmund in 6th, just a point outside the Champions League qualification places with half a season still to play.

RB Leipzig were able to avoid being leapfrogged by Bayer Leverkusen when they beat Peter Bosz’s side 1-0 at the Red Bull Arena on Saturday. In a tight game between two title challengers, just a single Christopher Nkuku goal could separate them. The young French forward took advantage of some schoolboy Leverkusen defending to fire home just his third Bundesliga goal this season, putting Leipzig six points clear of the Europa League spaces.

Reigning champions Bayern Munich are still riding high at the top of the table, however, with a substantial seven-point buffer between them and Leipzig. They were able to add weight to their claim for a ninth consecutive title when they trounced Hoffenheim 4-1. Goals from Jerome Boateng, Thomas Müller, Robert Lewandowski and Serge Gnabry won the game for the Bavarians against midtable-opposition. Despite their humiliating loss to Holstein Kiel in the DFB Pokal in January, Bayern have now won four on the bounce, scoring eleven goals and conceding just two in the process. With the second half of the season now upon us, it would take a monumental drop off in form for Hansi Flick’s men to concede the title from here.