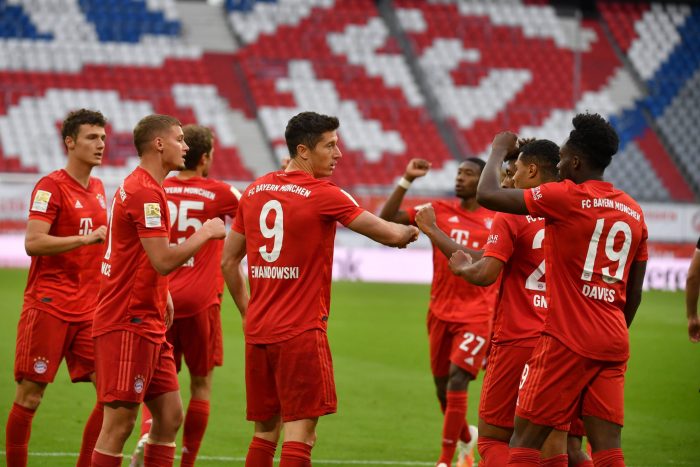 This week saw the return of midweek football as Bundesliga games were played on Tuesday and Wednesday as well over the weekend. The two game weeks were full of drama and intrigue as the final stretch of the season honed into view.

Borussia Dortmund v Bayern Munich, one of the most consequential Der Klassikers in recent memory, was the highlight of the midweek clashes. Billed as a potential title decider, this was the game where Dortmund could have closed the gap with Bayern to just one point, but that wasn’t to be. A clinical Bayern performance saw them subject Dortmund to their first home league defeat of the season as the Bavarian side won 1-0 thanks to a deft 20-yard chip from Joshua Kimmich. With the gap between the two great rivals now 7 points, Bayern continued their march to a likely eighth consecutive Bundesliga title with a 5-0 drubbing of relegation-threatened Fortuna Dusseldorf. Robert Lewandowksi’s brace, which took his total for the season up to 29, also meant he has now scored against every current Bundesliga team. Their star striker’s incredible form has been central to Bayern turning their season around. A shaky start under former coach Niko Kovac had many people thinking their crown was finally slipping, but Lewandowski’s goals and Hansi Flick’s assured leadership has allowed Bayern to rediscover their ruthlessness just when it mattered.

Dortmund’s loss to Bayern saw them cede more than just the title as their teenage sensation, Erling Haaland, was forced off injured halfway through the second half. With little else to play for this season other than retaining their Champions League qualification, Dortmund travelled to bottom side Paderborn on Sunday aiming to put to bed the ghosts of Tuesday night. The teams went into the break at 0-0 with Dortmund inexplicably unable to find the breakthrough after a series of gilt-edged chances went begging. The floodgates were opened in the second half, however, as the two teams scored a combined seven goals in the final 40 minutes. Thorgan Hazard opened the scoring with an easy tap in on the 54-minute mark, but it was Jadon Sancho who stole the show, scoring his first career hat-trick. Returning to the starting line up for the first time since picking up a calf injury, the England international made up for lost time with 3 stylish goals. Paderborn were able to give themselves a glimmer of hope when Hünemeier’s penalty halved the deficit to 2-1, but goals from Hakimi and Schmelzer, as well as Sancho, put the game beyond their reach.

Elsewhere in the Bundesliga, Schalke’s poor start since the season resumed continued as they lost to both Fortuna Dusseldorf and Werder Bremen. This week’s results mean it’s four losses from four for David Wagner’s side as their slide down the table continues. What will worry them more than anything else, however, is that both of this week’s defeats came at the hands of teams in the bottom three. With those below them picking up points and a difficult final run-in of games that sees them play Bayer Leverkusen, Frankfurt and Wolfsburg, their 10 point cushion above the relegation play-offs could be under threat.

Bayer Leverkusen and Borussia Mönchengladbach both returned to winning ways to reaffirm their European credentials after difficult midweek fixtures. Kai Havertz’s 11th Bundesliga goal this season was the difference as Leverkusen edged out Freiburg; meanwhile, goals from Florian Neuhaus, Marcus Thuram and Alassane Plea earned Mönchengladbach a stylish 4-1 win over Union Berlin. Their wins saw both Leverkusen and Mönchengladbach leapfrog RB Leipzig, but Die Roten Bullen are with a game in hand playing FC Köln on Monday night.

Another Thomas Muller assist.
Another Robert Lewandowski goal.
3-0 up before half-time.

Bayern are a winning machine ? pic.twitter.com/4r5YVtK8yZ

Following the approval of contact training by the government last week, Project Restart – the name given to the efforts to resume the Premier League – took a huge step forward as the Premier League’s return was set for the 17th June. Beginning with Manchester City v Arsenal and Aston Villa v Sheffield United, we can now expect to watch Premier League games for the first time since 13th March.

One of the caveats with the restart, however, is that the most high profile of the remaining fixtures are set to be played at neutral venues, including any games in which Liverpool could secure the title. For the purposes of public safety, the games set to be moved to neutral venues are:

The restart has run into criticism from parts of the media, however, as well as from some in the game, including as Aston Villa’s Tyrone Mings. Speaking to the Daily Mail, the former-Bournemouth defender claimed that the players were the “last to be consulted” over the league’s return, and that Project Restart was “possibly 100% financially driven”. Mings is the latest in a string of players to have expressed concerns over the timing of the Premier League’s return, including Newcastle’s on-loan full-back Danny Rose and Manchester City striker Sergio Aguero.

Following on from the Premier League’s announcement, The EFL also announced their plans for the Championship to return to action, with the first round of games set to be played on 20th June. The return date is “provisional” and “subject to the strict proviso that all safety requirements and government guidance is met,” however, an EFL statement outlined on Sunday. Nonetheless, it is the first solid promise of Championship action since the league was suspended on 8th March and potentially means that the standard relegation/promotion format can be honoured.

The EFL’s announcement was not without criticism as the Chief Executive of QPR, Lee Hoos, expressed anger at hearing nothing of the plans until just before they were released on Sunday. There was “absolutely no consultation,” Hoos claimed, stating that “having spoken with our director of football Les Ferdinand and our manager Mark Warburton, they share my views. We are vehemently opposed to this schedule.” The EFL reaffirmed, however, the provisional nature of the proposed date by stating that it could yet still change.

The Premier League has welcomed the announcement today by the Government permitting the return of competitive sport in England under strict conditions from 1 June#PL statement ? https://t.co/RYEsxGyHjh pic.twitter.com/fYUFPiFwsz

La Liga and Serie A Set to Return

This week saw La Liga and Serie A announce their returns. Spain’s Prime Minister, Pedro Sanchez, announced this week that football in Spain is safe to return with La Liga announcing that 11th June will see the season resume. The first fixture will be the Seville derby as Real Betis host Sevilla while Barcelona will continue their title defence by travelling to Real Mallorca on the 13th June. La Liga’s aim to finish the season by 19th July has meant a packed TV schedule is expected, with games being played behind closed doors every day of the week until the season is complete. Should the spread of Coronavirus continue to reduce, La Liga boss Javier Tebas hopes to begin the following season on 12th September.

In Italy, the country’s sports minister Vincenzo Spadafora confirmed that Serie A will return on 20th June. Setting a season conclusion date of 20th August, the Italian Football Federation also announced that the top three divisions would be played out as long as national conditions allowed. Should the virus return causing another stop in play, however, then a shorter alternative to a play-off will have to be devised. Some have welcomed the decision, excited to see if Lazio can finish above Juventus to claim their first Scudetto in 20 years. Others, however, are less thrilled with the decision. The owner of bottom side Brescia, Massimo Cellino, has labelled the league’s return a “crazy decision,” citing the dangers of playing competitive football after a two month break in “hot weather that is going to be terrible in Italy more than Germany.”