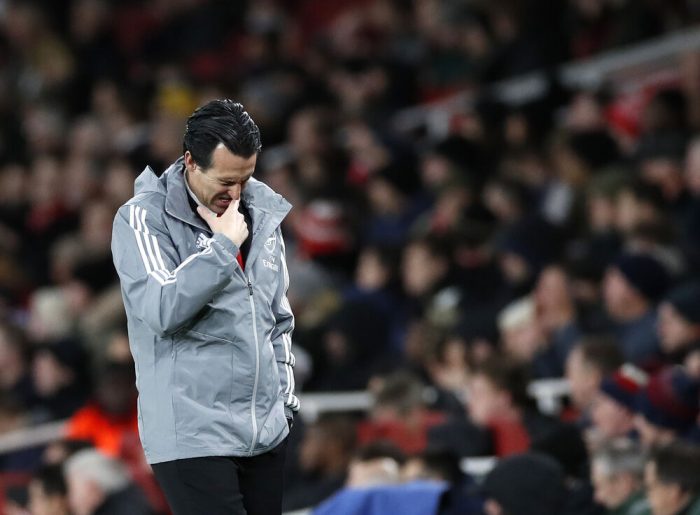 Just a week after Tottenham sacked Mauricio Pochettino, Spurs’ North London rivals Arsenal followed suit by handing Spanish manager Unai Emery his P45. However, while Pochettino’s sacking was met with a mixture of shock and sadness by Spurs fans, the feeling among Arsenal supports following Emery’s sacking was one of relief.

Since taking over, the Spaniard simply hasn’t been good enough. His first campaign wasn’t awful, and there were signs for encouragement, but things have taken a steep downturn this season. At the time of his sacking, Arsenal sat eighth in the Premier League with just four wins from 13 games. The Gunners were without a league win in five games and sat behind Wolves, Sheffield United and Burnley in the pecking order. The club had failed to win any of their last seven matches in all competitions, its worst winless run since 1992.

Arsenal’s season under Emery has been characterised by confused tactics and strange team selections The manager was also accused of a lack of leadership following his handling of the Granit Xhaka situation, and he reportedly lost the confidence of his players towards the end of his reign. Emery’s signings have also been underwhelming; hopes were high for this season following the record signing of Nicolas Pepe but the winger has struggled to make an impact, while the acquisition of David Luiz has done little to shore up the Gunners’ weak backline.

They never went on as poor a run across 1,235 games under Wenger ?

Attention now turns to finding Emery’s successor. The likes of Max Allegri, Nuno Espirito Santo, Mikel Arteta and even Mauricio Pochettino have all been linked with the job. The question is whether a coach of Allegri’s pedigree would be interested in the role at this time, or whether the likes Santo or Arteta would want to leave their respective clubs to take over an ailing Arsenal side at such a difficult point in the season.

While Emery wasn’t good enough, the squad he had at his disposal isn’t up to scratch either. The signing of Pepe papered over years of poor investment, but the issue is now clear to see. The team is completely unbalanced with a serious lack of options in the wide areas, there’s a lack of quality in midfield and the defence is made up of calamity-prone players in Luiz, Mustafi and Sokratis. They should still be ahead of some of the teams above them in the league table, but whoever takes the Arsenal job still has a very difficult challenge on their hands to turn things around and secure Champions League football.

There were a number of surprising results in the Premier League this weekend, none more so than Manchester City’s 2-2 draw away to Newcastle. The manner of the draw will particularly frustrate Guardiola; Raheem Sterling first gave his side the lead in the 22nd minute, only for them to concede three minutes later. Kevin De Bruyne’s stunning half volley eight minutes from time look to have won the game for City, but the lead was once again cancelled out, this time by a brilliant strike by Jonjo Shelvey just six minutes later.

The result means City slip down to third, three points behind Leicester and 11 behind league leaders Liverpool, who won again courtesy of a 2-1 scoreline at home to Brighton. We may only be in November, but it’s already very difficult to see the title ending up anywhere apart from Anfield. City just don’t look the same team as last season and are suffering from the long-term injuries to Aymeric Laporte and Leroy Sane. Liverpool keep grinding out results despite not blowing away times like they did last campaign and are already looking like champions.

Tottenham’s resurgence since the appointment of Jose Mourinho continued with a 3-2 victory over Bournemouth on Saturday. The game followed the pattern of Mourinho’s first match in charge against West Ham, with Spurs going 3-0 up before conceding two goals towards the end of the game. Those goals will frustrate Mourinho, but at this point getting the three points is all that matters for the manager and his side. Dele Alli already looks a different player having scored two goals against Bournemouth, and Spurs now sit in fifth place, just six points off fourth.

Mourinho’s weekend was made better by the fact that a number of Spurs’ top-four rivals dropped points. Chelsea fell to a shock 1-0 home defeat to West Ham, their second loss in a row, leaving them in fourth. Interim Arsenal boss Freddie Ljungberg failed to stop the rot as the Gunners were held 2-2 at home by relegation-threatened Norwich, while Manchester United’s 2-2 home draw against Aston Villa meant it was another difficult weekend for Ole Gunnar Solskjaer. United’s next match sees Mourinho return to Old Trafford on Wednesday, and a win for Spurs would pile the pressure on Solskjaer despite his claims that United’s league position is not currently a big concern.

The showpiece event of this weekend’s European action was Barcelona’s visit to the Wanda Metropolitano on Sunday, and it was Ernesto Valverde’s side who came out on top. It was a typical game between the two in many ways, with Barca dominating but Atletico proving resilience until Lionel Messi’s brilliant goal in the 86th minute. The result means Barca stay top of the table above Real Madrid on goal difference, Zinedine Zidane’s side beating Alaves 2-1 on Saturday.

Atletico now slip down to sixth in what has been a difficult season so far for Diego Simeone’s side, having picked up just one win in the last five league games. The team is struggling for cohesion following a summer of squad upheaval, while €126m signing Joao Felix has just two goals in 11 La Liga games. With the likes of Sevilla, Real Sociedad and Athletic Bilbao impressing this campaign, Atletico will need to find some form or face a fight to keep their Champions League place.

Elsewhere in Europe, Juventus dropped points by drawing 2-2 at home to Sassuolo. That gave an opportunity to Inter Milan, who duly took it by defeating SPAL 2-1 to overtake the Old Lady at the top of Serie A. Antonio Conte has transformed fallen giants Inter since taking over in the summer while Juventus have so far failed to convince under new manager Maurizio Sarri, and it looks like a title race that could potentially go down to the wire.

There was also an unexpected result in the Bundesliga, as Bayern’s resurgence under Hansi Flick came to an abrupt end with a 2-1 home defeat to Bayern Leverkusen. Surprise leaders Borussia Monchengladbach continued their unlikely title charge with a 4-2 win over Freiburg, while RB Leipzig are a point behind in second courtesy of their 3-2 defeat off Paderborn. Bayern are still only four points off first, but their struggles this season mean this is certainly the most interesting Bundesliga title race for a number of years.

It wasn’t the best of weeks for English clubs in Europe. Spurs were the only side to win, but even they weren’t exactly convincing. Jose Mourinho’s return to the competition got off to a bad start as his side went 2-0 down at home to Olympiacos within twenty minutes, highlighting the defensive issues the manager has on his hands. They did eventually run out 4-2 winners, though, meaning they join group winners Bayern in the last 16.

The Premier League’s other Champions League participants all drew in midweek. City could only manage a 1-1 draw at home to Shakhtar Donetsk, while Liverpool were held 1-1 at home by Napoli. Chelsea came from behind to lead 2-1 away to Valencia before conceding an equaliser in the 82nd minute. While City are already through, Liverpool and Chelsea’s fates go down to the last group game. Jurgen Klopp’s will need a result in a potentially tricky away match at Red Bull Salzburg, while Chelsea may need to win at home to Lille, depending on other results. Both should make it through, but nothing is guaranteed as of yet.

If the Premier League clubs failed to impress in the Champions League, the Europa League showing was simply embarrassing. Manchester United set the tone by losing 2-1 away to Kazakhstan side Astana. Ole Gunnar Solskjaer picked a team of kids, but it was still a humiliating result. Arsenal then lost 2-1 at home to Eintracht Frankfurt, a defeat that cost Unai Emery his job, while Wolves drew 3-3 away to Braga. United and Wolves are already through, and Arsenal will be as long as they avoid a heavy defeat at Standard Liege in the final game.

There was another managerial casualty in the Premier League this weekend, with Watford sacking Quique Sanchez Flores after the club’s 2-1 defeat to Southampton. It was already a baffling decision to replace Javi Gracia with Flores considering he only lasted a single campaign in his previous spell at the club, and the Spaniard won just one of his ten league games in charge.

Few would have had Watford down as relegation candidates at the start of the season, but the club are rooted to the bottom and are already six points from safety. There’s still a long way to go, but it’s a large gap to bridge for a team in such shocking form. It’s vital that the Pozzo family learn from their mistake and make the right managerial appointment this time around, with Chris Hughton currently odds on favourite to get the job.