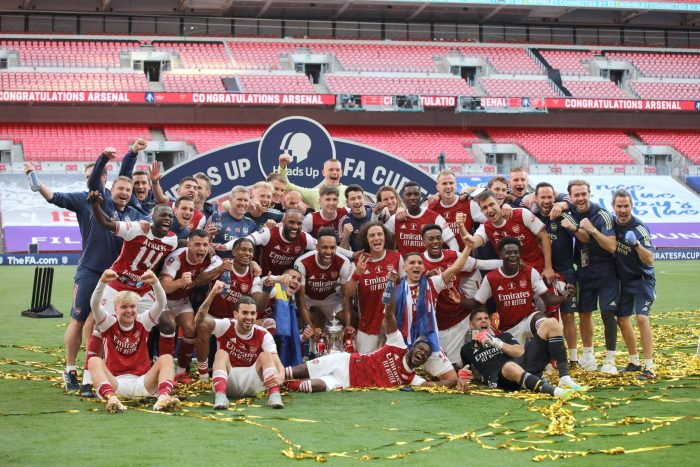 Arsenal proved their credentials as the most successful club in the FA Cup after they won their 14th title on Saturday. Coming from a goal behind, Pierre-Emerick Aubameyang led from the front as his brace proved to be enough to seal the win against Chelsea.

Chelsea started the game as the better side, with Christian Pulisic opening the scoring after five minutes. A dangerous ball played in from Mason Mount was not cleared properly by the Arsenal defence and the American was able to skip past a series of challenges before dinking the ball over a sprawling Emi Martinez. Arsenal dominated the left hand side of the pitch throughout the game, however, so it wasn’t long before they were able hit back. Aubameyang pounced on a long ball played over the top from Kieran Tierney, but was bundled over in the box by the Chelsea captain, César Azpilacueta. A penalty was duly awarded which Aubameyang slotted away, giving Willy Caballero no chance in goal.

The second half was a considerably more tense affair, with both sides trying not to make a mistake. Christian Pulisic looked to be the most dangerous player in Chelsea blue, until he was forced off through injury having pulled a hamstring. Arsenal took advantage of Chelsea’s misfortune by scoring from the only shot on target in the entire second half. A driving run from Héctor Bellerín saw him charge down the centre of the pitch, laying the ball off Nicolas Pepé before he was brought down by Azpilacueta. Pépé cut inside to give the ball to Aubameyang who’s finish was nothing short of world class. His beautifully executed shoulder drop took him past Kurt Zouma with ease, while the composure in his chipped finish over Caballero proved why he should be considered amongst the best strikers in world football.

A second yellow card offence for Mateo Kovačić six minutes later reduced Chelsea to ten men and extinguished any hopes of a potential comeback. The Blues will still feel hard done by, however, after Martinez received no punishment for handling the ball well outside his penalty area.

Nonetheless, it was Arsenal who came out victorious on what was a record breaking evening for the Gunners. Mikel Arteta became the first person to both captain and manage Arsenal to victory in an FA Cup final, while Arsenal’s victory itself means they have won all seven FA Cup finals they’ve been in since 2002 – no team has had a longer run of successive final triumphs in the competition.

While Arsenal will rightly celebrate, however, they know that their work is still far from done. Aubameyang is still yet to sign a contract extension with the Gunners and securing his future is vital for what Arteta is trying to achieve in North London. With their place in the Europa League secured for next season though, Arsenal can rest easier knowing that a tumultuous season is finally behind them.

Our boss. Our trophy.

The two teams to contest the Championship playoff final were finally revealed this week as Brentford came from behind to beat Swansea and Fulham held off against a spirited Cardiff side. It means that the final will be the third instalment of this West London derby of the season and, ultimately, the most consequential for decades.

Brentford have been in sparkling form this season, with their talismanic front three of Ollie Watkins, Saïd Benrahma and Bryan Mbuemo scoring 59 goals between them this season so far. They went into their semi-final second leg against Swansea a goal behind on aggregate, but were soon 2-1 up after 15 minutes following goals from Watkins and Emiliano Marcondes. A third goal from Mbuemo just after halftime put the game beyond Swansea’s reach, despite Rhian Brewster’s 78th minute strike giving the South Wales side a faint glimmer of hope. It was a fitting way to say goodbye to Griffin Park, their home ground since 1904. The Bees will now be hoping they can mark their debut season at the new Brentford Community Stadium with their first appearance in the English top flight since 1947.

Fulham may have lost to Cardiff on the night, but their comfortable 2-0 win in the first leg earlier in the week meant that the challenge was too great for the Bluebirds. The Cottagers were in trouble early on, however, as Curtis Nelson scored after five minutes. But sixty seconds later, Neeskens Kebano scored to restore parity on the night. Lee Tomlin gave Cardiff a real chance just after half time making the score 3-2 on aggregate, but his injury five minutes before time put to bed any hope the South Wales side might have had of achieving what would have been a truly memorable comeback.

Tuesday’s final at Wembley has enormous consequences for both Brentford and Fulham. Brentford have been on a meteoric rise in recent seasons, having only won promotion to the Championship six years ago. The last time they played in the top flight, Britain was still living under rationing so a victory over Fulham would be truly historic. Should they lose, however, you can expect to see the side pulled apart as their most promising players get snapped up by a number of interested parties in the Premier League.

Fulham’s appearance in the final means it’s their second time in three seasons, having beaten Aston Villa in 2018. Tom Cairney led them to victory then and will be hoping to do the same again on Tuesday. A loss will inevitably mean a similar fate for much of Fulham’s exciting young side as well as questions about manager Scott Parker’s future. With a year still left on their own stadium redevelopment, Fulham will be hoping the added cash flow of Premier League football will make up for the reduction in revenue the lack of the Riverside Stand has incurred this season. A second consecutive season in the Championship will do little to fill that hole.

A west London derby with a spot in the Premier League on the line ???? pic.twitter.com/Qrg2NIRr2O

The Scottish Premiership made it’s return this week after the 2019/20 season was cancelled as a result of the COVID-19 pandemic. It was business as usual for Celtic as they began their pursuit of a tenth consecutive league title against Hamilton Academical. The Bhoys walked out as 5-1 winners in the end, with star striker Odsonne Edouard picking up a hat-trick. His prolific start to the season hasn’t gone unnoticed, with Leicester City apparently watching his progress with great interest. It would be a huge loss for the club should they have to sell him before the transfer window shuts, especially considering the progress Rangers have made under Steven Gerrard in recent seasons.

Their cross town rivals at Ibrox had an altogether more difficult game against an Aberdeen side determined to upset the state of play in Scotland. Nonetheless, the game ended at Pittodrie with Rangers as 1-0 winners, but Gerard’s men will have to improve a lot should they want to stand a chance of overturning their 3-1 deficit against Bayer Leverkusen when the Europa League gets back underway this week.

The real question of this year’s Scottish Premiership is who will finish as the best of the rest behind the inevitable first and second placings of either Celtic or Rangers. Motherwell finished third in last season’s considerably shorter campaign, earning themselves qualification to the Europa League for the first time since 2014. But Aberdeen’s improvement in recent seasons means they will be hot on the heels of Steelmen, especially considering they only finished one point behind them before the previous season was abruptly ended. Hibernian are also in with a good shout of finishing the season strongly. Last season’s top scorers outside the Old Firm sides will be looking forward to a first full campaign under experienced manager Jack Ross, but they will face stiff competition from other resurgent teams like Livingstone and Kilmarnock.