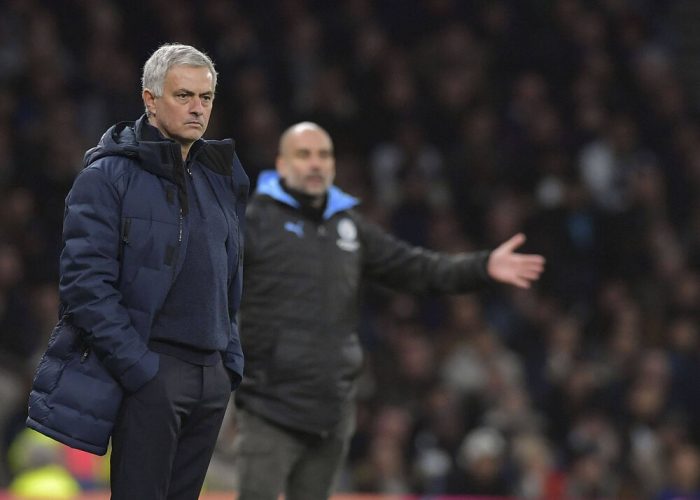 Mourinho gets the better of Guardiola

Manchester City were strong favourites for the win prior to Sunday’s game against Spurs, with Jose Mourinho’s side struggling for form recently. The first hour played out much as expected, with City dominating the home team. Spurs captain Hugo Lloris kept his side in the game with a penalty save in the first half, while Sergio Aguero came close when he struck against the post. However, the game took a completely different direction when Oleksandr Zinchenko was sent off in the 61st minute for a second bookable offence.

That moment swung the pendulum in Spurs’ favour, and it took them just two minutes to make the breakthrough, with new signing Steven Bergwijn scoring an excellent debut volley. Son Heung-min then doubled his sides lead in the 71st, securing Spurs an unlikely win and their league victory against City since October 2016.

It was a vital three points for Spurs and Mourinho, as it meant they took advantage over Chelsea and Manchester United both drawing earlier in the weekend, Chelsea 2-2 away to Leicester and United 0-0 at home to Wolves. Those results meant Spurs’ win sent them above United into fifth, now just four points behind Chelsea prior to the two sides’ match later this month.

It was a particularly poor weekend for United, with new signing Bruno Fernandes unable to inspire them to victory over Wolves. They now sit 7th, above Wolves on goal difference and behind Sheffield United following the Blades’ 1-0 win at Crystal Palace.

Bournemouth had been the Premier League’s most out of form team prior to last weekend, but two consecutive victories have eased the pressure on Eddie Howe. The Cherries faced fellow strugglers Aston Villa on Saturday, securing a 2-1 win despite playing most of the second half with 10 men following Jefferson Lerma’s sending off. That result moved Bournemouth ahead of Villa into 16th, with Villa now a single point outside the relegation zone.

Elsewhere at the bottom, West Ham could only draw 3-3 at home to Brighton, leaving the Hammers 18th and now five league games without a win. David Moyes managed to save the club from relegation in 2017/18, but his second stint at West Ham is yet to have the same effect. With the club owners recently warning of the financial need to secure Premier League survival, these are worrying times for Hammers fans.

The big game in Spain saw Real Madrid host city-rivals Atletico, with Zinedine Zidane’s side looking to keep their spot at the top of the table. It was a predictably tight and tense affair, with Real having most of the ball. Atletico produced a solid enough first-half but began to struggle when Alvaro Morata was forced off by injury in the 50th minute. The breakthrough came just six minutes later, Karim Benzema scoring the goal which gave Real their first domestic derby win at the Bernabeu since 2012.

? This is the best defensive record we've ever had at this stage of LaLiga!
? We've only conceded 13 goals in 22 league matches!#RMLiga | #HalaMadrid pic.twitter.com/cgpq9WUJO6

While Real are on course to secure their first league title since 2017, it’s been a poor season for Atletico. The loss means Diego Simeone’s side slip to 6th, behind Getafe, Sevilla and Valencia. The side have struggled for goals all season, having scored just 22 in the league so far, in comparison to Real’s 40 and Barca’s 52. They also no longer look like the impenetrable force they once were following the summer departures of Diego Godin, Juanfran and Filipe Luis, and they will have to improve if they are to secure Champions League football for next season.

Following Real’s win, it was then over to Barcelona to keep pace at the top. The Catalans did that courtesy of a 2-1 home win over Levante, exciting youngster Ansu Fati scoring twice in quick succession in the first half to keep Barca three points behind their arch-rivals.

Bayern Munich have spent much of this season playing catchup following a poor start, but the Bundesliga champions retook their familiar place at the top of the table this weekend. The Bavarians played Mainz on Saturday, goals from Robert Lewandowski, Thomas Muller and Thiago securing a 3-1 win.

That result put pressure on league leaders RB Leipzig, who hosted fellow title hopefuls Borussia Monchengladbach. Leipzig dominated much of the game but surprisingly trailed 2-0 by the 35th minute, before Patrik Schick pulled one back shortly after half-time. Leipzig then gained an advantage when Gladbach striker Alassane Plea was sent off on the hour mark, though Gladbach came close to holding onto the win until midfielder Christopher Nkunku struck in the 89th minute to salvage a point for the home side.

Bayern now sit atop of the table on 42, with Leipzig a single point behind. Borussia Dortmund’s 5-0 win over Union Berlin moved them up to third, above Gladbach on goal difference the two both three points off the top. While it remains the most enthralling Bundesliga title race of recent years, it’s beginning to look like it may have a more familiar result with Bayern leading the way once again.

It’s been a strange past few weeks at the top of the Championship, with former runaway leaders West Brom and Leeds both seriously struggling for form. Top-of-the-table West Brom hadn’t won in seven league games before the weekend, but a 2-0 home win bottom club Luton gave Slaven Bilic’s side a much needed win.

Leeds won for the first time in three league games last weekend, but fell to another defeat this weekend, suffering a disappointing 1-0 home loss to relegation-threatened Wigan. That result gave the chasing pack the opportunity to put the pressure on, and Fulham just that courtesy of a 3-2 win over Huddersfield.

That win puts Fulham just three points behind Leeds, with Nottingham Forest, Brentford and Bristol City also not too far behind. It looked like West Brom and Leeds were both shoo-ins for the automatic promotion spots before the Christmas period, but recent results have blown the league wide open. Marcelo Bielsa will need to rectify his side’s form quickly if they are to avoid risking missing out on promotion in the same manner as last season.

With the January transfer window slamming shut last Friday, this past week saw some significant incomings and outgoings in the Premier League. That included Christian Eriksen moving from Spurs to Inter Milan for £17m, six months before his contract was due to expire. The Dane was one of the Premier League’s best midfielders over the last few years, but his form dipped over the last 12 months and in the end it looks like a good deal for each party considering the circumstances.

Spurs wasted no time in securing Eriksen’s heir, announcing on the same day that Geovanni lo Celo’s loan move had been made permanent for £37m, the Argentine having impressed in recent games. Jose Mourinho’s side also completed the signing of 22-year-old Dutch forward Steven Bergwijn from PSV, the Dutchman having an immediate impact with his goal against City on Sunday.

Mikel Arteta also made his first signing as Arsenal manager, bringing in centre-back Pablo Mari on loan with a view to a permanent deal. Arteta worked with Mari, signed from Brazilian side Flamengo, whilst the two were at Manchester City and will hope the 26-year-old will be able to shore up his side’s leaky defence.

The biggest signing of the window was Manchester United’s capture of Portuguese attacking midfielder Bruno Fernandes from Sporting Lisbon. United were strongly linked with Fernandes last summer and again this window, though a deal looked to have died following some drawn-out haggling between the two clubs. If he can replicate the form that saw him score 47 goals and provide 32 assists from midfield over the last season and a half, then United will have a serious player on their hands.

A somewhat less exciting transfer for United fans was the deadline singing for ex-Watford striker Odion Ighalo, brought in on-loan from Chinese side Shanghai Greenland Shenhua. Brought in in an attempt to fill the void created by Marcus Rashford’s injury, it looks a desperate move on United’s part who are now feeling the strain of not adequately replacing Romelu Lukaku last summer.