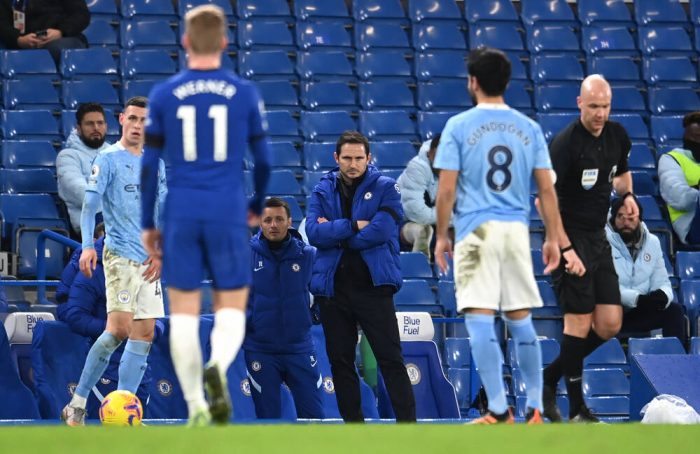 On Sunday night, Chelsea put in a performance against Manchester City that typified the club’s recent downturn in form. Within 34 minutes the hosts were 3-0 down thanks to goals from Ilkay Gundogan, Phil Foden and Kevin de Bruyne, and Chelsea never once looked like threatening that lead. Despite a late consolation goal from Callum Hudson-Odoi and boasting 55% of the ball come the final whistle, Chelsea were second best in every area of the park and the stats showed. They only created 9 shots from open play with just 2 of those hitting the target, which serves as pretty bleak reading for Chelsea fans when compared to City’s dominant 6 on target from 18 attempts.

But Chelsea’s dismal performance on the night was just the latest in a string of poor results for the club, with Frank Lampard’s men winning just 2 in 8 in all competitions in the last month. This has meant that the West London legend is under renewed pressure from the famously formidable Chelsea hierarchy, who are not known to let sentimentality get in the way of their high aspirations. In order to arrest this decline, Lampard must find a way to get the best out of his raft of new signings, with Kai Havertz and Timo Werner the prime culprits when it comes to underperforming. What the result also signals, however, is the reignition of City’s season as the 3 points from the evening took them up to 5th in the table, level on points with Tottenham in 4th.

Earlier on Sunday, Leicester continued their impressive run of form as they landed a 2nd win in 4, this time against Steve Bruce’s Newcastle United. Sensational goals from James Maddison and Youri Tielemans were the difference between the two sides on what was another miserable day for the Magpies who have lost 4 of their last 6 games, with their last win coming on 12th December against relegation-threatened West Brom. Leicester, however, will be content with their afternoon’s work. A fine late consolation goal from Andy Carrol in the 82nd minute gave the scoreline a more respectable look, but a cursory glance at the table will show the gap between these two sides as Newcastle drop down to 15th while Leicester maintain their lofty 3rd spot.

Arsenal have seemingly turned their fortunes around in recent weeks following the club’s worst start to a season since 1975. In the aftermath of their 2-1 away loss to Everton on 19th December, there were fears for their safety in the top flight, with the likes of Alan Shearer stating, “I would not be so sure. Not with that starting team and the attitude of some of those players,” when asked whether he thought the Gunners had a chance of staying up. But since then, Arteta has transformed Arsenal’s form in the league. A landmark 3-1 win against Chelsea, followed up by a 1-0 away win at Brighton and Saturday’s 4-0 drubbing of West Brom at The Hawthorns now moves Arsenal up to 11th in the table. There is still a long way to go for Arteta’s men to hit the heights he wants them to — with the likes of West Ham, Southampton, Chelsea, Aston Villa and Everton all standing between them and a European spot — but on current form, something certainly looks to have changed at Arsenal. Their January fixtures against Southampton and Manchester United, however, will be stern tests of exactly how much has changed.

Elsewhere in the Premier League, Manchester United continued their recent hot run of form by beating Aston Villa 2-1 at Old Trafford to move them up to joint first in the table alongside rivals Liverpool. The win was United’s 5th in 6 games, a run that follows on directly from their drab 0-0 draw with Manchester City on the 12th December. As part of their impressive Christmas run, there were signpost wins against Leeds, who they thumped 6-2 at Old Trafford, and Everton, against whom they recorded a respectable 2-0 away win.

There was also an assertive draw for Brighton who came from behind at home to draw 3-3 with Wolves in a dramatic game at The Amex. Goals from Aaron Conolly, Neal Maupay and Lewis Dunk rescued the point for the Seagulls against a Wolves side who have stuttered in recent weeks in the absence of talismanic striker Raul Jiminez. Earlier on Saturday afternoon, Sheffield United made unwanted history by breaking the record for the longest winless streak from the start of a Premier League campaign, recording their 17th game without a win in their 2-0 away loss to Crystal Palace. It’s now looking bleak for the Blades who are bottom of the table with just 2 points as the halfway point of the season edges ever closer.

Third man run. If you know, you know.

In La Liga, Atletico Madrid reclaimed top spot with a last gasp victory away at Alaves. Marcos Llorente had initially given Atleti the lead in the 41st minute, but an own goal from Felipe put 10-man Alaves level with just 6 minutes of normal time remaining. But in the 90th minute, Luis Suarez got on the end of Joao Felix’s cross in the 90th minute to poke home a dramatic winner. The win sees Atletico move back to the top of the La Liga table, while cross-city rivals Real Madrid closed the gap between them to just 2 points as their victory over Celta Vigo cemented their place in 2nd. But despite the narrow gap, Atleti have the opportunity to extend it even further with the two games in hand they have over Zinedine Zidane’s Real.

In Germany, it was business as usual in 2021 for the German and European champions Bayern Munich as they romped to a 5-2 victory at home to Mainz. But the side from Rhineland-Palatinate were the ones on top after the first 45 minutes as they went into the break with a 2-0 lead thanks to goals from Jonathan Burkardt and Alexander Hack. But as a display of dominance more than anything else, Bayern claimed all 3 points for themselves with 5 second-half goals of their own. Strikes from Joshua Kimmich, Niklas Sule, Leroy Sane and a brace from the indefatigable Robert Lewandowski earned Bayern a resounding victory that takes them top of the Bundesliga.

There was a meeting of old friends in Italy on Sunday as Filippo Inzhagi’s Benevento welcomed Stefan Pioli’s AC Milan to Campania. The two managers enjoyed great success as players with Milan, winning 2 Serie A and 2 Champions League titles with the club, but it was Pioli who came out on top in this one. Despite losing Sandro Tonali to a red card in the 33rd minute for a dangerous challenge on Artur Ionita, Milan were able to take home all 3 points with a composed 2-0 win to take them back to the top of the table. There was also a convincing win for Inter who beat Crotone 6-2 courtesy of a hat-trick from Lautaro Martinez, as well as strikes from Romelu Lukaku, Achraf Hakimi and an own goal from Luca Marrone.