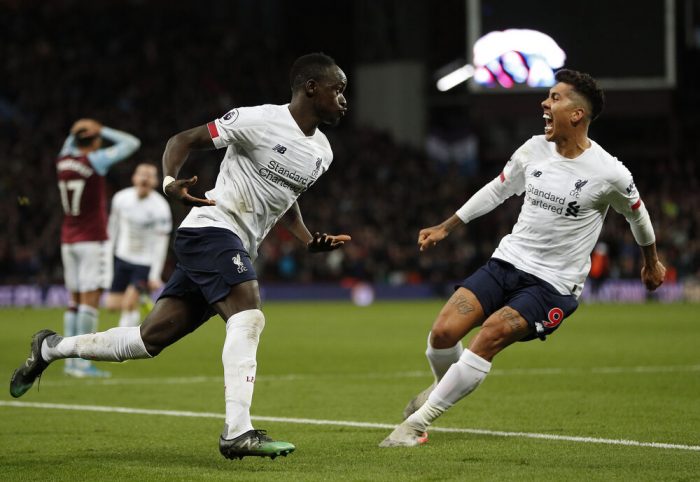 Liverpool came within minutes of dropping points for just the second time in the league this season, but they ended up with all courtesy of two late goals. Jurgen Klopp’s side trailed Aston Villa since Trezeguet’s goal in the 21st minute, and despite dominating, struggled to find a way through a resolute Villa defence. That was until Andrew Robertson headed in the equaliser in the 87nd minute, before Mane flicked on Alexander-Arnold’s corner into the back of the net in the fourth minute of injury time.

Manchester City also left it late against Southampton. Trailing 1-0 since the first half, it took an 86th minute goal from Kyle Walker to earn Pep Guardiola’s side the three points. City dominated the game in terms of possession, but they registered just four shots on target and found it difficult to break down Southampton’s impressive defensive display.

The results mean the two sides go into next weekend’s top of the table clash with six points between them. Neither side have been at their scintillating best in recent weeks, but Liverpool are grinding out results in the way you’d expect of potential champions while City are just about keeping up. If Liverpool win then it’s hard seeing them lose a nine point lead. If City win and reduce the gap to three points, then it’s very much game on.

It was another shocking weekend for United, who limped to a 1-0 away defeat to Bournemouth in a game in which they offered little throughout. The mood around Old Trafford had lifted slightly following back to back wins over Norwich and Chelsea, but this weekend’s loss very much brought Ole Gunnar Solskjaer’s side crashing back down to earth, with United now sitting in tenth.

Arsenal also slipped up, though they did at least manage a point at home to Wolves, who are now looking more like the impressive side of last season after a difficult start. Under pressure boss Unai Emery once again made some odd substitutions, replacing defensive midfielder Lucas Torreira with young winger Bukayo Saka despite hanging on to the lead with just 17 minutes to go.

Those results mean United and Arsenal have fallen further adrift in the race for the top four. Chelsea and Leicester continued their impressive form, both picking up three points, meaning the gap to fifth-placed Arsenal is now six points. Spurs, who drew 1-1 away to Everton, sit ten points off in 11th.

12 – This was Leicester’s 12th Premier League win under Brendan Rodgers – since his first game in charge, only Liverpool (19) and Man City (17) have won more than the Foxes. Surge. pic.twitter.com/TUpHirQGPD

It was another odd weekend in La Liga. Barcelona travelled to Levante and went 1-0 up courtesy of a Lionel Messi penalty. However, three goals in the space of seven second half minutes gave Levante a shock 3-1 win.

Atletico Madrid had the opportunity to capitalise on Barca’s defeat away to Sevilla, but could only manage a 1-1 draw in what was an admittedly difficult fixture. Real Madrid played Real Betis at home, but Zinedine Zidane’s side couldn’t find a way through and the match finished 0-0.

The big three’s results meant newly promoted Granada, the story of the season so far, had the chance to go top. However, despite taking the lead, they fell to a 2-1 home defeat to Real Sociedad. That result brings Sociedad level on points at the top with Barca and Madrid, with Atletico and Sevilla just a point behind.

One of the headline results from around Europe this weekend was Bayern Munich’s 5-1 thrashing at the hands of Eintracht Frankfurt. Bayern never recovered from Jerome Boateng’s sending off in the ninth minute and it was embarrassing capitulation for the Bundesliga champions, leaving them sitting in fourth place.

The loss to Niko Kovac’s former side was enough for the manager to lose his job. Kovac was sacked on Sunday after an underwhelming sixteen months in charge, with Jose Mourinho, Massimiliano Allegri and Erik ten Hag among the favourites for the job.

Bayern’s closest rivals made sure to capitalise on the Champions’ slip up. Dortmund beat Wolfsburg 3-0, RB Leipzig demolished Mainz 8-0, and Borussia Monchengladbach secured a hard fought 2-1 away win against Bayer Leverkusen. Gladbach remain top with a three point gap over second placed Dortmund.

This weekend ended with a name sitting at the top of the Championship that not many fancied at the start of the season. Preston North End took to the summit thanks to a 1-0 away victory over Charlton. Alex Neil, who previously won promotion with Norwich, has worked wonders at Deepdale and his side’s good form has seen him linked with the vacant Stoke job following Nathan Jones’ sacking. However, Preston fans will be glad to know that Niel has reaffirmed his commitment to the club and looks set to stay at Preston.

Leeds and Swansea are both only behind Preston on goal difference, with Marcelo Bielsa’s side defeating QPR 2-0 and the Swans coming out on top against Wigan courtesy of a 92nd-minute winner. West Brom have the chance to reclaim top spot when they take on managerless Stoke tonight.

At the other end of the table, Danny Cowley’s Huddersfield got another win to continue their rise up the table. Luton lost their third game on the bounce to slip down to 21st place, while Middlesbrough endured another torrid afternoon, losing 2-0 at Derby and having Geroge Saville sent off.