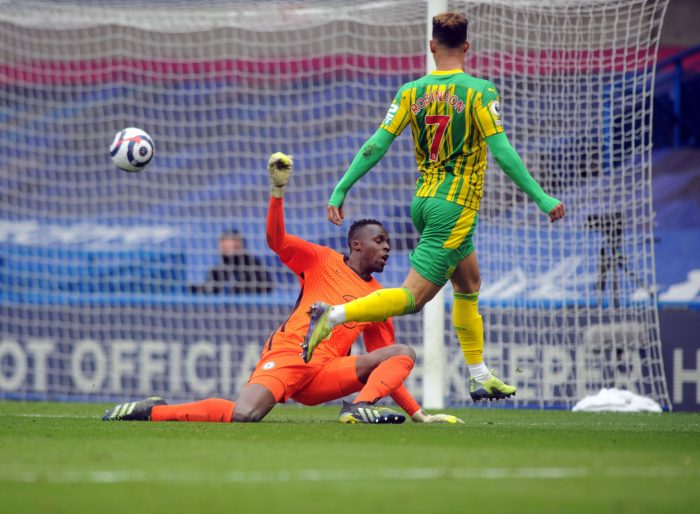 West Brom brought Thomas Tuchel’s unbeaten start as Chelsea boss to an abrupt halt when they kicked off the weekend’s Premier League action with a stunning 5-2 away win at Stamford Bridge. The Blues had only conceded twice in Tuchel’s first fourteen matches in charge so to say it was a shock to see Sam Allardyce’s struggling West Brom side match that tally in just over a single half of football is an understatement.

It looked to be business as usual for Chelsea when Marcos Alonso’s 27th minute free-kick cannoned back off the post and Christian Pulisic was on hand to turn in the rebound and score his first goal under new boss Tuchel. But just two minutes later Chelsea’s grip on the game was loosened when veteran defender, Thiago Silva, picked up his second yellow card for a late lunge on Baggies battler Okay Yokuslu.

Despite West Brom’s man advantage, Chelsea initially looked capable of handling the Baggies, who had only scored twice in their previous seven matches. But that all changed as the clock ticked past the 45th minute and into first-half stoppage time. A long clearance from Baggies stopper, Sam Johnstone, caught Chelsea centre-backs Andreas Christiansen and Kurt Zouma napping. Matheus Pereira took advantage of the wealth of space and ran onto the bouncing ball, looping it over Edouard Mendy with his first touch.

The game was then turned on its head mere minutes later when a wayward header from Jorginho found its way to Mbaye Diagne with his back to goal on the edge of the Chelsea box. The Senegalese international played in Pereira who turned before guiding a pinpoint finish between three Chelsea defenders and into Mendy’s net for his second in the space of two first-half minutes.

Thiago Silva is sent off in the 29th minute on his first game since February 4 😬 pic.twitter.com/RUWW2bDlK2

Callum Robinson extended the Baggies’ unlikely lead in the 63rd minute with a perfectly timed side-foot volley from the edge of the area. Diagne then got in on the act himself in the 68th minute with a first-time placed shot into the bottom left-hand corner. Mason Mount grabbed one back for the hosts in the 71st minute after good work from Timo Werner, but there was more to come for the away side as Robinson dinked in his second and West Brom’s fifth in the 91st minute.

The win was the Baggies’ first at Stamford Bridge in over forty years but Allardyce’s side are still eight points adrift of safety going into the season’s final straight. The game was also the first time Chelsea have conceded five goals in a home league game since a 5-3 defeat to Arsenal in 2011 and means the Blues drop out of the top four.

Later on Saturday, there were wins for Leeds, who edged out Sheffield United 2-1 at Elland Road, and Liverpool who triumphed 3-0 over Arsenal at the Emirates to keep their hopes of Champions League qualification alive.

Manchester City took another step towards regaining the Premier League title with a 2-0 win over Leicester at the King Power Stadium. Second-half goals from Bernard Mendy and Gabriel Jesus gave Pep Guardiola’s side an eighteenth Premier League win in nineteen games as they motor towards yet another title.

Kevin De Bruyne made 14 ball recoveries vs Leicester, no Man City player has made more in a single Premier League game this season.

He made 10 (!) more than Wilfred Ndidi. 😳 pic.twitter.com/5SePFdfrVF

West Ham moved back into the top four with a 3-2 win over Wolves at Molineux on Monday night and will have Hammers fans dreaming of a first ever Champions League campaign. The damage was done in thirty-two first-half minutes as Nuno Espirito Santo’s side struggled to deal with West Ham’s relentless attacks. Jesse Lingard got the game off to a flyer when on six minutes he picked the ball up in his own half and drove at the retreating Wolves backline. The recently-recalled England man left Leander Dendoncker and Romain Sass in his wake before slotting the ball past Rui Patricio with his left foot. It was a sensational solo run and finish and marked Lingard’s sixth goal in eight Premier League games for the Hammers.

Lingard was involved again as West Ham doubled their lead in the fourteenth minute. Arthur Masuaku ran onto his loose turn and squared the ball to the penalty spot where Pablo Fornals expertly turned the ball home. Wolves’ players struggled to get to grips with Lingard’s direct running and the on-loan United man was once again at the heart of the move that put his side three goals to the good in the 38th minute. He rode the challenges of no less than three Wolves players before playing in Jarred Bowen who rifled a near-post shot past Rui Patricio.

The game looked all but decided before Wolves’ own master of the dribble fancied a slice of the action for himself. Adama Traore turned on the afterburners with a signature burst that left both Vlad Coufal and Tomas Soucek in his wake before he delivered a pinpoint left-footed cross to the head of Dendoncker. The Belgian international obliged with an assured finish to make it 3-1 going into the half-time break.

Half-time substitute, Fabio Silva, got another goal back for Wolves in the 68th minute when he latched onto Pedro Neto’s lofted through ball and slid the ball past Lukasz Fabianski. The hosts pushed on for the equaliser as the game drew towards a close but David Moyes’ side were able to hold on and secure an invaluable three points that took them back up into the top four.

With the likes of Chelsea, Liverpool and Spurs all hot on their heels in the race for fourth place, the Hammers know they’ll need to have an almost perfect run in to secure qualification for what would be their first ever Champions League campaign.

On Sunday there were comeback wins for Southampton, Aston Villa and Manchester United who all came from behind to take three points against Burnley, Fulham and Brighton respectively. Whilst Jose Mourinho was once again left cursing his luck as his Spurs side were held to a 2-2 draw at St James’ Park by Newcastle thanks to an 85th-minute equaliser from Arsenal loanee, Joe Willock.

The Bundesliga title race looks to have been ended early as Bayern Munich recorded a 1-0 win over second-placed RB Leipzig, despite the absence of record-chasing hitman, Robert Lewandowski. The win puts FC Hollywood seven points clear of their closest rivals with seven games left to play and means Hansi Flick’s side are within touching distance of retaining the Meisterschale for a ninth consecutive year.

The game’s deciding moment came in the 38th minute when Thomas Muller ran onto Joshua Kimmich’s through ball before turning and laying the ball back to Leon Goretzka. Arriving late from midfield, the German midfielder whipped the ball past the Peter Gulacsi in the Leipzig goal for his third strike in four Bundesliga matches.

The second-half saw Leipzig endeavour to get back in the game but a dipping long-range effort from Marcel Sabitzer that was tipped over by Manuel Neuer was the closest the hosts came to levelling the scores. Goretzka’s goal proved to be enough to separate the sides and consolidated Bayern’s table-topping lead.

Bayern Munich are in a league of their own 🌏 pic.twitter.com/FIcrHIY00F

In Spain, league leaders Atletico Madrid lost just their third game of the season, going down 1-0 to Sevilla at the Ramon Sanchez-Pizjuan. Sevilla were awarded a penalty in the eighth minute when Saul was adjudged to have brought down Ivan Rakitic in the box, but Jan Oblak saved Lucas Ocampo’s spot-kick. Both Sevilla fullbacks combined to give the hosts the lead in the 70th minute when Jesus Navas’ cross was headed home by Marcos Acuna. Atleti squandered two golden chances to get back on level terms, first through Mario Hermoso and then Angel Correa, but they couldn’t find a way past Sevilla stopper, Yassine Bounou.

The loss opened the door for Real Madrid and Barcelona to close the gap on the league leaders and both duly obliged with wins over Eibar and Real Valladolid, respectively. La Liga’s top three are now separated by just three points going into the season’s final nine games.

In Serie A, Inter Milan recorded their ninth consecutive victory with a 1-0 win over Bologna courtesy of Romelu Lukaku’s twentieth league goal of the season. The win puts the Nerazzurri eight points clear of city rivals, AC Milan, who could only draw 1-1 at home to Sampdoria. Antonio Conte’s side are on course to win their first Scudetto since the 2009-10 season and end Juventus’ nine-year stranglehold on the Serie A title.