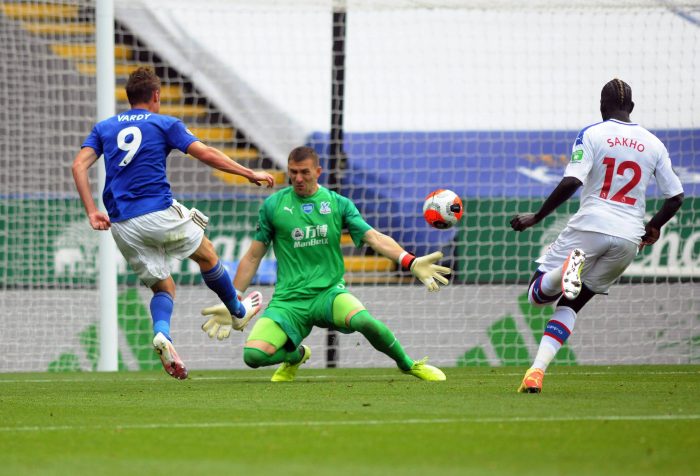 It’s been a busy week in the Premier League with two matchweeks crammed into the space of seven days. This week’s results have had a huge impact on the four teams chasing the final two Champions League spaces, with Manchester United the only European hopeful picking up the full six points from their two games.

A shaky restart to season meant third placed Leicester saw their 8 point gap over fifth placed cut down to just 3 and their 2-1 loss away to a resurgent Everton on Wednesday only compounded their misery. Their luck changed on Saturday, however, following a convincing 3-0 win against Crystal Palace. 2 goals for Jamie Vardy, his first since the return of football, will give the Foxes reason to believe that normality has been resumed and that their hopes for a second season in the Champions League in four years are still alive. Vardy’s 2 goals also keeps him in poll position for the Golden Boot taking his total up to 21 for the season.

After having helped Liverpool dethrone Manchester City two weeks ago, spirits were high in the Chelsea camp as they prepared for a London derby against relegation threatened West Ham on Wednesday. But a spirited Hammers side proved too much for Frank Lampard’s men in a game that was as thrilling as it was littered with questionable VAR decisions, with the match ending 3-2 to West Ham. Chelsea, therefore, needed a response on Saturday against Watford and that’s exactly what they gave, brushing aside the Hornets 3-0. Goals from Olivier Giroud, Willian and Ross Barkley helped claim the win, but the real difference was Christian Pulisic who has been hugely impressive for the West Londoners since the season restarted. Watford now sit just a point above the relegation zone with crucial games against West Ham and Norwich to navigate within the next two weeks.

Fifth and sixth placed Manchester United and Wolves had been locked on points since football returned with the pair enjoying great runs of form. But a first loss in 9 nine games for Wolves against Arsenal not only lost them ground on the Red Devils but put Arsenal back into European contention. The Gunners are now just 3 points behind Wolves and will be hoping to continue their recent hot run of form that saw them win an away game against a team above them in the table for the first time since 2015. Manchester United’s thumping 5-2 win against Bournemouth not only renewed their fans’ hopes of seeing their side reach the Champions League, but also showed glimpses of what to expect next season. United have been glorious since Bruno Fernandes was introduced to the side and the growth of his partnership with Paul Pogba is proving to be a truly mouth watering future prospect.

There were also some big shocks in the league this week. West Ham’s inspired performance against Chelsea not only dented the Blues’ European hopes, but helped drag the Hammers 3 points clear of the relegation zone, with their draw against Newcastle on Sunday extending that lead to 4.

This week also saw Manchester City welcome newly crowned champions Liverpool in what was their first game since clinching the title. When Liverpool named a full strength side many assumed that the Reds were going to prove their worth against City, but the result was anything but. Liverpool were trounced 4-0 by a rampant City side in a game that could have finished with an even greater margin were it nor for VAR bizarrely ruling out Riyad Mahrez’s last minute goal for handball. Liverpool were sluggish throughout with their defence regularly pulled out of position by City’s dominant possession game. They were able to make amends on Sunday, however, following a 2-0 win over Aston Villa. Goals from Sadio Mané and Curtis Jones will ease the pain of Thursday night, but their win also deepens Villa’s hole in the relegation zone. Villa have just 2 points from their last five games since the restart and time is running out for them to save themselves.

Further VAR controversy was had in Tottenham’s dismal showing away at Sheffield United. The Blades walked out as deserved 3-0 winners, but the game could have had a completely different feel had Harry Kane’s goal not been ruled out by VAR with the game at 1-0 to Sheffield United. It was an undoubtedly harsh decision as Loucas Moura appeared to have the ball kicked against his arm in the build up to Kane’s finish as he fell over under pressure from a number of United players. But a win for United was the right result as Spurs looked flat and devoid of any ideas.

Following their riotous 4-0 win over Liverpool, City went into Sunday’s game against Southampton with their confidence sky high. But the Sky Blues once again found themselves losing away for the third time in a row – a career first for Guardiola. Che Adams’ outstanding lob of Ederson was not only the match winning goal, but it was his first for the Saints and, for all of City’s excellent football, they could not find a way through an exceptional Southampton defence. Southampton’s performance saw them move up to 13th, showing just how far they’ve come in since their humiliating 9-0 defeat against Leicester back in October. The club’s decision to stick by Ralph Hasenhüttl has proved to be a masterstroke with the Austrian somehow managing to turn their season around from relegation prospects to mid-table finishers.

Brentford on the Charge

Brentford continued their excellent return to football this week with a resounding 3-0 win over Wigan Athletic. That now makes it five out five for the Bees sending them charging up the table to within 5 points of West Brom. The Baggies’ initially shaky results in recent weeks have been somewhat amended by consecutive victories against Sheffield Wednesday and Hull City, but with Brentford breathing down their necks the pressure is all on them.

Brentford’s most recent victims, Wigan, find themselves in an all too different position, however. The Latics had been enjoying a hugely positive run of form before Saturday, but the news that the club was going into administration and would face a 12 point deduction has sent morale plummeting. The points deduction would send the club straight back into the relegation rat-race and the suspicious circumstances surrounding the administration announcement has the potential to threaten the future of the club as a whole.

Leeds reaffirmed their position at the top of the table with a 3-1 win over Blackburn Rovers and extended their gap above the play-off places to 6 points. For those in the play-off places, results were a mixed bag. Fulham resurrected their dismal return to football with consecutive victories against QPR and Birmingham City sending them up to fourth, while a last minute Chris Martin equaliser held Nottingham Forest to a frustrating 1-1 draw against East Midlands rivals Derby County. Cardiff reaffirmed their position in the final play off place with a tight 1-0 victory in the Severnside derby against Bristol City, extending their lead over Derby in 7th place to 3 points.

At the bottom end of the table Middlesbrough’s dismal run of form continued. The appointment of Neil Warnock as manager had given fans hope that their season could be resurrected, but back to back defeats against Hull and QPR have plunged Boro right back into trouble. Hull themselves are threatened by the drop with only 1 point separating them from Boro in 22nd place. In fact, mixed results for all of the bottom seven mean that there are just 2 points separating Stoke City in 18th and Middlesbrough in 22nd. A sudden dip in form could plunge anyone of the sides into League One in what is proving to be one of the tightest relegation scraps in recent years.

In other news, Said Benrahma has bagged a hat-trick for Brentford!

Barcelona’s recent dip in form has allowed Real Madrid to leapfrog them in the table and extend their lead at the top to 4 points. Real’s tight 1-0 win at Athletic Club on Sunday, courtesy of a Sergio Ramos penalty, made it seven wins out of seven for Los Blancos. Whereas Barca’s win away at Valencia was their first win in four, following two frustrating draws against Atletico Madrid and Celta Vigo in recent weeks. Meanwhile, Sevilla’s 3-0 win away at Leganes solidified their position in fourth, opening up a gap of 3 points over Villareal in fifth place. Getafe once harboured hopes of Champions League football earlier in the season, but their recent form has seen them slip into the Europa League spots. Finishing the season in fifth or sixth would still be a huge achievement for the side and would mark back to back qualifications for the Europa League.

In Italy, it’s looking increasingly likely that Juventus will clinch their ninth consecutive Serie A title. The Turin side had been under threat all season from both Inter and Lazio, but Inter’s dip in form and Lazio’s shock 3-0 loss at home to AC Milan means that Juve have now opened up a 7 point gap at the top. There are still eight games remaining in the season, but with a side packed full of superstars like Juve, it is hard to see them ceding their position so late in the season. Atalanta, meanwhile, all but sealed their place in the Champions League next season with a 1-0 win over Cagliari, extending their lead over fifth placed Rome to 15 points. It was their 10th game without loss and moved their total goals tally for the season up to 83, twenty more than Juve and, with eight games still left to play, the league’s top scorers are well on track to break the 100 goal mark.

The Bundesliga may have officially ended last week, but there was still the small matter of German Cup final. The DFB Pokal, as it’s known in Germany, was this year contested between Peter Bosz’s exciting young Bayer Leverkusen side and the newly crowned Bundesliga champions, Bayern Munich. In what was their first DFB Pokal final for 11 years, Leverkusen were looking to make up for the disappointment of missing out on the final Champions League spot of the season to Borussia Mönchengladbach in the last game of the season. But it wasn’t to be, however, as Bayern walked out as convincing 4-2 winners, winning the domestic double for the second year running. It’s even more remarkable given that Bayern were almost out of the title race by December. But a run of 20 games unbeaten under new manager Hansi Flick resurrected their season as the Bavarians reinforced their superiority on German football for an eighth year running.

Bayern at their brilliant best once again ????#Berlin2020 #B04FCB pic.twitter.com/3NK8GQMWpd