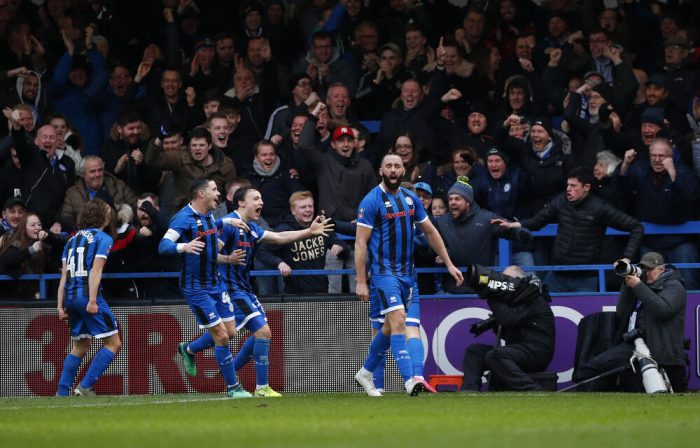 The FA Cup third round is always bound to produce some eye-catching results, and that was certainly the case this weekend, the highlight being the game between Watford and Tranmere. The Premier League side took a commanding lead, going into half-time 3-0 up. However, despite looking down and out, Tranmere—currently 21st in League One—produced a thrilling comeback to equalise 3-3, an 87th-minute penalty securing the underdogs a home replay.

Watford weren’t the only Premier League side to struggle, with Spurs also facing a replay after drawing 1-1 away to Championship side Middlesbrough. Newcastle could only manage the same scoreline against League One strugglers Rochdale, with 40-year-old Aaron Wilbraham bagging the underdogs’ equaliser, while Crystal Palace, Brighton and Aston Villa were all knocked out by lower league opposition.

Manchester United faced a tricky away trip to Wolves in a match that ended 0-0, meaning the two sides will play again at Old Trafford. The stand-out fixture of the weekend was the Merseyside derby, with Liverpool coming out on top 1-0. It will be a particularly bitter pill to swallow for new Everton boss Carlo Ancelotti, who put out a strong team only to see it fail to beat a Liverpool side made mostly up of youngsters and reserves, with 18-year-old midfielder Curtis Jones bagging the winner.

The big match from the midweek Premier League fixtures saw Arsenal welcome Manchester United to the Emirates, with new boss Mikel Arteta seeking his first win. He got just that, with Nicolas Pepe and Sokratis securing a 2-0 victory for the Gunners.

It was an impressive performance from Arsenal, particularly in the first-half, who produced in an energetic, high-intensity performance. Arteta fielded all four of Pierre-Emerick Aubameyang, Alexandre Lacazette, Mesut Ozil and Pepe, the first time the attacking quartet has played together. They displayed a good understanding and caused the United defence a number of problems in the opening 45 minutes, with a rejuvenated Ozil impressing once again.

Mesut Ozil covered the most distance of any Arsenal player against Man United.

✅ Ozil won possession back 10 times, more than any other Arsenal player.

Great display from him ? pic.twitter.com/hb0d9TuYqH

Arsenal dropped off a bit as United improved in the second half, but it was still a welcome change to the often passive displays seen under Unai Emery. It’s clear that Arteta is already making his mark on the team, the United victory ending a run of seven home games without a win and also securing the Gunners’ first victory over a team in the top half of the league table this season. Arsenal still sit in 10th, but they’re now just three points off sixth-placed Spurs.

While Arsenal gained ground in the race for a Champions League spot, two of their closest rivals struggled in the midweek fixtures. Chelsea’s recent inconsistent form continued, Frank Lampard’s side drawing 1-1 away to Brighton.

It’s another frustrating result for the Chelsea manager, who watched his side beat Spurs and Arsenal only to lose to Bournemouth and Southampton in the four games prior to this. Chelsea are still in a fairly healthy position considering the club’s circumstances at the start of the season, sitting fourth and five points clear of fifth-placed United, but Lampard will need to address his side’s recent struggles against the lower-placed teams if he is to secure Champions League football.

Spurs also played down on the South Coast on Wednesday, with Jose Mourinho’s following up last week’s 2-2 draw with Norwich with a 1-0 loss to relegation-threatened Southampton. In-form Danny Ings got the winner for the Saints, while Mourinho’s night was made worse by Harry Kane picking up a hamstring injury.

Mourinho also caused controversy by picking up a yellow card for a confrontation with Southampton’s goalkeeping coach, before calling him an “idiot” in a post-match interview. The new manager bounce now seems to have evaporated and Spurs fans will be hoping that Mourinho’s antics are not a sign of the manager returning to the behaviour he displayed while at Manchester United.

It was a somewhat odd round of fixtures regarding the Premier League relegation battle, as the majority of threatened teams picked up points. Watford’s resurgence under Nigel Pearson continued with a 2-1 win over Wolves, while Aston Villa beat Burnley away and Southampton defeated Spurs. Bottom club Norwich also picked up a point by drawing 1-1 at home to Crystal Palace.

One team that didn’t pick up any points is Bournemouth, who fell to a 4-0 defeat away to West Ham in David Moyes’ first game back as Hammers manager. It was a poor performance from the Cherries, who managed just two shots on target and now have just one win from their last ten Premier League games.

Bournemouth have often impressed since gaining promotion to the Premier League, which has led to Eddie Howe being linked with bigger jobs, but they’re now at risk of going backwards this season. They’ve been unfortunate with injuries, but they’re a team short of both confidence and ideas. The defence has never been the strongest, but the attacking verve that has been characteristic of the Cherries has abandoned them over the last few months, with star striker Callum Wilson now thirteen league games without a goal.

Bournemouth have the quality in their squad to stay up, but Howe needs to quickly fix their current form. A foray into the transfer market may be necessary, with the side looking particularly weak in the centre of midfield and at the back..

La Liga gets back underway

This weekend saw the La Liga action resume following the league’s Winter break, and there were some significant results. Barcelona took on city rivals and bottom-placed club Espanyol, but could only manage a 2-2 draw. Arturo Vidal put the Catalans 2-1 up on the hour mark, but were put under pressure when Frenkie de Jong was sent off fifteen minutes later. Wu Lei scored with two minutes from time to secure a point for unfancied Espanyol.

Barca’s title challengers Real Madrid played away to Getafe, running out comfortable 3-0 winners thanks to a Raphael Varane brace and a strike from Luka Modric. The two results mean Madrid go back level on points with Barca at the top of the table, separated by just goal difference. Atletico Madrid earned a 2-1 win over Levante to move third and keep within touching distance of the big two.

The midweek Championship fixtures saw West Brom and Leeds face off in a top-of-the-table clash at the Hawthorns, and it was honours even with the two settling for a 1-1 draw. Leeds controlled the majority of the possession but it was the Baggies who had the best of the chances, taking an early lead through Semi Ajayi. Ajayi was then involved in the equaliser, Patrick Bamford’s header deflecting off the defender and resulting in an unfortunate own goal. The result means the two sides remain neck-and-neck at the top of the table, separated only by goal difference.

Other results across the league saw Preston fall out of the playoff spots and down to 10th following their 2-0 loss to a rejuvenated Misslesbrough, who picked up their fourth win on the bounce. Swansea moved back into the playoff spots by defeating Charlton 1-0, while Brentford moved to third courtesy of a 4-0 demolition of Bristol City.

Millwall’s 3-1 defeat of Luton moved them seventh and just a point off the playoffs, having leapfrogged Sheffield Wednesday who fell to a third consecutive defeat at home at Hull. There was also movement at the bottom, with relegation candidates Stoke and Wigan both picking up vital wins, the Potters thrashing Huddersfield 5-2 and the Latics beating earning a 3-2 win over Birmingham.