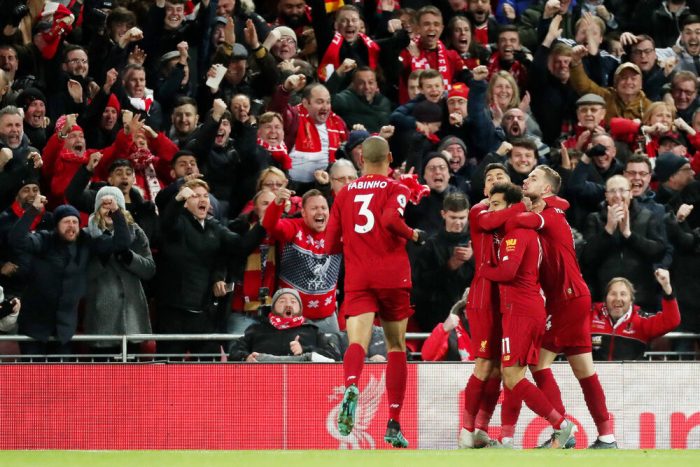 Sunday saw the biggest fixture of the season so far take place, as lead leaders Liverpool welcome champions Manchester City to Anfield. With Liverpool already holding a six-point lead over their closest rivals, it was billed as a potentially title-deciding match, and safe to say it was a fiery, controversial affair.

It took Liverpool just six minutes to take the lead, with Fabinho rocketing in a shot from outside the box. City were furious for being denied a penalty in the same passage of play after the ball hit Trent Alexander-Arnold’s hand in the Liverpool box. Jurgen Klopp’s side doubled their lead just seven minutes later, with Mo Salah heading in a brilliant deep cross from Andrew Robertson.

Sadio Mane made it three by heading in Jordan Henderson’s cross in the 51st minute, leaving City a mammoth task on their hands. They never really threatened to get anything out of the game from there, with Bernardo Silva scoring a consolation goal twelve minutes from time. Pep Guardiola and his side were left further incensed after being denied another penalty claim after the ball again hit Alexander-Arnold’s hand late in the game.

The result means Liverpool extend their lead at the top to eight points. Manchester City fall into fourth, nine points behind the league leaders. Even in November, Liverpool are odds on favourites and it already seems like a huge challenge for any team to catch up. It looks like this could finally be the season when the Reds end their 29-year wait for a league title.

For Manchester City, it’s another poor result in what has been a frustrating season so far. Pep Guardiola was furious with the refereeing decisions, but the VAR ruled that they were correct and as Jose Mourinho said on Sky Sports, City are too good to be complaining about these decisions. In truth, City’s makeshift defence of John Stones and Fernandinho just isn’t good enough for a side with title ambitions and the team currently looks far off their scintillating best.

Leicester and Chelsea move above City

Not many people thought Leicester and Chelsea would sit above City after 12 league games, that that’s exactly how the league table reads, with the Foxes and the Blues second and third respectively.

This weekend Leicester faced off against Arsenal in a clash of the top four chasers, and it was Brendan Rodgers’ side who ran out comfortable winners. Goals from Jamie Vardy and James Maddison secured the 2-0 victory, as this hugely impressive Leicester side continue their push for Champions League football. The Gunners managed just a single shot on target, with manager Unai Emery under increasing pressure as his side continue to fall further adrift.

Many thought Frank Lampard’s side would struggle this season after a difficult start, but he really has turned things around with aplomb. Much has been made of his use of the club’s young players, and it has been truly impressive. Abraham sits second in the goal-scoring charts with 10 goals, while Pulisic has been eased in expertly and is now in great form. Young right-back Reece James also had a strong game against Palace, with Cesar Azpilicueta now facing a struggle to get back in the team.

For Chelsea to be third and above City considering the circumstances really is a fantastic achievement. The transfer ban was a dark cloud hanging over the club all summer, but it’s proved to be a blessing in disguise. With reports claiming the club are confident of overturning the ban in time for the January window, some fans with surely be hoping for no such distractions or disruptions as Chelsea look to secure Champions League football.

It’s rare that a player getting subbed off makes headlines, but when it’s Cristiano Ronaldo being hauled off in the 55th minute, then make headlines it does. Ronaldo’s substitution in Juventus’ game against AC Milan was big news in Italy, as the Portuguese star was clearly unhappy and reportedly left the ground immediately to join up with his national team. However, the fact that his replacement, Paulo Dybala, scored the winning goal justified Sarri’s decision.

While on the surface this may seem simply like a display of petulance, it hints at a larger underlying issue, namely the fact that time finally seems to be catching up with Ronaldo. It was his second substitution in a week following his withdrawal in the Champions League game against Lokomotiv Moscow, and the forward has looked far from his best this season. For most 34-year-olds six goals in 14 games would be a decent return, but Ronaldo’s incredible numbers over the years mean that rate can’t help but seem underwhelming. It’s clear now that he’s no longer the undroppable phenomenon of years gone by.

Juve’s 1-0 win mean they stay top, with Inter just a point behind following their 2-1 win over Hellas Verona. Elsewhere, Napoli plunged further into crisis with a 0-0 result against Genoa, leaving them seventh. The club is in meltdown after players refused to attend a training camp organised by club president Aurelio De Laurentis, with the future of manager Carlo Ancelotti and several key players now in serious doubt.

Fellow crisis club Milan sit in 14th following their loss to Juventus, just four points off the relegation zone. The decision to replace Marco Giampaolo with Stefano Piolo has done little to stop the rot, with Milan now suffering their worst start for 78 years.

It was a slightly unusual Der Klassiker on Saturday, with Bayern sitting fourth having just sacked manager Niko Kovac and Dortmund in second behind league leaders Borussia Monchengladbach. It was a great chance for Dortmund to capitalise on Bayern’s mini-crisis, but Lucien Favre’s side collapsed as the current champions strolled to a 4-0 win.

Robert Lewandowski got two and Serge Gnabry also got on the scoresheet, with Mats Hummels suffering the ignominy of scoring an own goal against his former team. It was another humiliation at the hands of Dortmund’s old rivals, following the 5-0 demolition in April of last season that all but secured Bayern the title. Jadon Sancho endured a particularly frustrating evening, being hauled off after just 36 minutes.

The result puts a lot of pressure on Favre. His reign started impressively, but Dortmund have been worryingly porous at the back this term, and the big losses against Bayern leave a particularly bad taste in the mouth. The fact that this is the weakest Bayern team seen in years also places serious doubts on Favre’s ability to mount a genuine challenge.

Elsewhere in the Bundesliga, Gladbach retained top spot with a 3-1 home win over Werder Bremen. It’s been a hugely impressive season for Marco Rose’s side so far, with the team four points above second-placed RB Leipzig, who Leipzig got a 4-2 away win over Hertha Berlin. The current table sees Bayern in third, level on points with goal difference, while Dortmund sit all the way down in sixth behind Freiburg and Hoffenheim.

The highlight of the past week’s Champions League games was undoubtedly Chelsea’s stunning comeback against Ajax. 4-1 down after 55 minutes, second-half goals from Jorginho, Cesar Azpilicueta and Reece James secured a point in dramatic style.

The Blues were helped by a bizarre instance in which two Ajax players were sent off in a single passage of play. Daley Blind committed a foul, but the ref played advantage and Joel Veltman then conceded a penalty for handball. The referee went back and gave Blind a second yellow and then showed Veltman a straight red, leaving Ajax with nine men.

Elsewhere, Barcelona were once again unconvincing in their 0-0 home draw against Slavia Praha, a result that piles more pressure on Ernesto Valverde. In the same group, Inter Milan threw away a 2-0 lead away at Borussia Dortmund to lose 3-2. It was a crucial win for Dortmund, leaving them second with seven points and a three-point cushion above Inter, who now look unlikely to qualify for the last 16.

Real Madrid demolished Galatasay 6-0 at home, but rather than Eden Hazard, it was 18-year-old Rodrygo who lit up the Bernabeu with a perfect hat-trick. Meanwhile, Real’s city rivals Atletico suffered a disappointing 2-1 away loss to Bayern Leverkusen. Liverpool and Tottenham picked up relatively straight forward wins over Genk and Red Star Belgrade, while Man City could only manage a 1-1 draw away to Italian side Atalanta.

Celtic and Rangers produced two more excellent results in the mid-week Europa League games. Celtic arguably faced the trickier task, travelling to Rome to face Coppa Italia holders Lazio. The Italians have been in good form recently and sit fourth in Serie A, but Niel Lennon’s side managed to pull off a dramatic 2-1 win courtesy of a 95th-minute goal from midfielder Olivier Ntcham.

Rangers also had a big challenge on their hands, hosting Porto at Ibrox. The Portuguese side have also had a decent start to the season, sitting just two points off the top spot in the Primeira Liga, but goals from Alfredo Morelos and Steven Davis secured a commendable 2-0 win for the Gers.

Celtic’s result means they’ve booked their place in the knockout stage with two games to spare, a fantastic achievement considering the tough group they were drawn in. Rangers sit second on goal difference and have a three-point cushion over third-placed Feyenoord, so their fate is in their hands. Scottish clubs have had a pretty torrid time of it lately in Europe, but the Glasgow clubs are finally giving their fans something to get excited about once again.

Elsewhere in the Europa League, Manchester United and Wolves both won again to push them a step closer to the knockout round. Arsenal’s poor recent form continued with a draw away to Portuguese side Vitoria, but the Gunners should still qualify with relative ease.