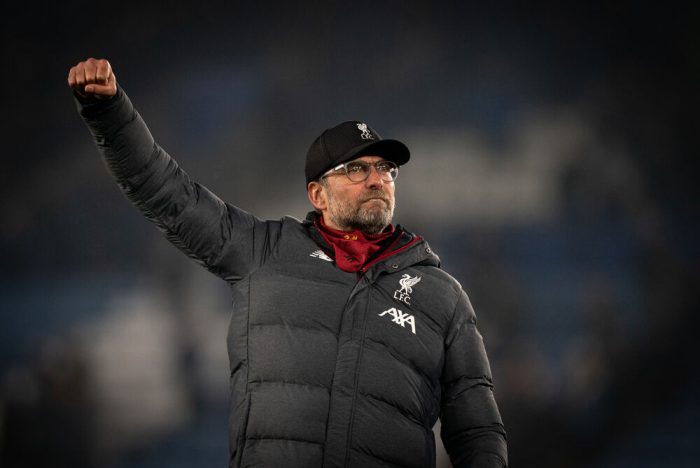 The fixture of the weekend in the Premier League saw Spurs host runaway leaders Liverpool, with Jose Mourinho hoping to turn around his side’s poor recent run. That wasn’t to be, as a Robert Firmino strike in the 37th minute was enough to give Liverpool the three points. The win means Jurgen Klopp’s side have now recorded the best ever start to a Premier League season as they continue their march towards a first league title in 30 years.

Elsewhere in the Premier League, Manchester City demolished Aston Villa 6-1 to leapfrog Leicester and move back into second, the Foxes having lost 2-1 to Southampton on Saturday. Manchester United and Chelsea returned to winning ways, United thrashing Norwich 4-0 and the Blues putting three past Burnley with no reply. Those results mean Chelsea stay fourth with United five points behind in the race for a Champions League spot.

Mikel Arteta was looking to build on his first win as Arsenal boss last week, but his side could only manage a 1-1 draw away to Crystal Palace, leaving the Gunners tenth. The manager was also dealt a huge blow by Pierre-Emerick Aubameyang receiving a straight red for a dangerous tackle, meaning the star striker will now miss league games against Sheffield United, Chelsea and an FA Cup match at Bournemouth.

Pressure grows on Howe after thrashing

The battle to avoid the drop has taken a turn over recent weeks, with former basement club Watford having transformed since the appointment of Nigel Pearson. While Watford are one of the league’s form teams, Eddie Howe’s Bournemouth have struggled in recent weeks, and the two sides met this weekend.

It was a terrible result for Bournemouth, being thrashed 3-0 at home and recording just a single shot on target. The result leaves the Cherries in 19th, having picked up just a single point from their last five games. It puts Eddie Howe, often regarded as one of the country’s best young managers, under serious pressure. It would still be a shock to see Bournemouth sack their long term boss at this point, but there’s only so long this kind of form can go on without some kind of change.

City get revenge in League Cup

The League Cup semi-final first leg fixtures took place last week, with Tuesday’s Manchester derby the pick of the ties. Hosts United would have been confident after overturning City in the league in December, but it turned out to be a very different game.

Pep Guardiola sprang a surprise with an unusual system, leaving both Sergio Aguero and Gabriel Jesus on the bench and employing a strikerless 4-4-2 formation. With Bernardo Silva and Kevin de Bruyne playing furthest forward, City overwhelmed their opponents, Silva giving them the lead with a stunning strike. Riyad Mahrez then doubled the advantage, benefitting for some poor defending from Victor Lindelof.

A swift counterattack shortly after ended with de Bruyne making a fool of Phil Jones then shooting, the ball bouncing in off Andreas Pereira to putt City 3-0 up before the break. Marcus Rashford pulled one back in the second half, but overall an injury-hit United were exposed by a far better City side. Ole Gunnar Solskjaer’s team are still in this tie, but only just.

The other semi-final first leg saw high-flying Leicester host struggling Aston Villa at the King Power. The away side took a surprising lead in the 28th minute, and Leicester had to wait until the 74th before substitute Kelechi Iheanacho struck the equaliser. Villa have home advantage in the deciding leg, but Brendan Rodgers will be confident of taking his side through to the final.

Juve move clear at top of Serie A

Current Serie A champions Juventus resumed their title defence by defeating Roma 2-1 away from home on Sunday. Young centre-back Merih Demiral put the Old Lady 1-0 up after just three minutes, with Cristiano Ronaldo adding another from the penalty spot seven minutes later. Diego Perotti pulled one back in the second half, but Maurizio Sarri’s side held out for the win.

That result moves Juve two points clear at the top of the table, as challengers Inter could only manage a 1-1 draw against Atlanta on Saturday. Meanwhile, surprise package Lazio continued their remarkable run by notching their tenth consecutive league win, defeating struggling Napoli 1-0, putting the capital club just four points behind Inter in third.

That result leaves sorry Napoli sitting in 11th place, the club now having won just a single match out of their last ten league games. It’s a sad state of affairs for a side that has gone from being one of the most exciting in Europe and challengers to Juventus to one that can’t get a win. Gennaro Gattuso’s appointment has done little to stop the rot, and with key players rumoured to be off in the summer, it could be a long way back to the top for this Napoli side.

This week saw the first Spanish Super Cup of its kind take place. Having traditionally been contested between the league and cup winners, the 2019/20 edition, played in Saudi Arabia, saw a new four-team format introduced for the first time.

These changes, as expected, had plenty of critics, with the clubs struggling to sell tickets to Spanish supporters. In addition to the location drawing ire, the new format has also been criticised, particularly as it resulted in neither league winners Barcelona or Copa del Rey holders Valencia even making the final.

Valencia were defeated 3-1 by Real Madrid in the first game, while Atletico Madrid edged Barcelona 3-2, goals from Alvaro Morata and Angel Correa in the last ten minutes securing victory and pushing Ernesto Valverde closer to the exit door. The two Madrid sides played out a 0-0 draw in the final, with Real eventually winning 4-1 on penalties.

Zinedine Zidane has won every final he has managed in for Real Madrid. pic.twitter.com/oocmo8xo07

Both Leeds and West Brom failed to address their recent poor form this weekend, Marcelo Bielsa’s side losing 2-0 at home to Sheffield Wednesday and the Baggies drawing 2-2 away to Charlton. It’s a strange turn of events for the Championship frontrunners, the Baggies without a win in their last five and Leeds with just one from six, though it’s Slaven Bilic’s side that now sit a point clear at the top.

Sheffield Wednesday’s much-needed win saw the club move back into the playoffs at the expense of Swansea, who drew 0-0 against arch-rivals Cardiff on Sunday. Brentford moved third courtesy of a 3-1 over QPR, while a win for Fulham and a draw for Nottingham Forest keeps the two sides fourth and fifth respectively.