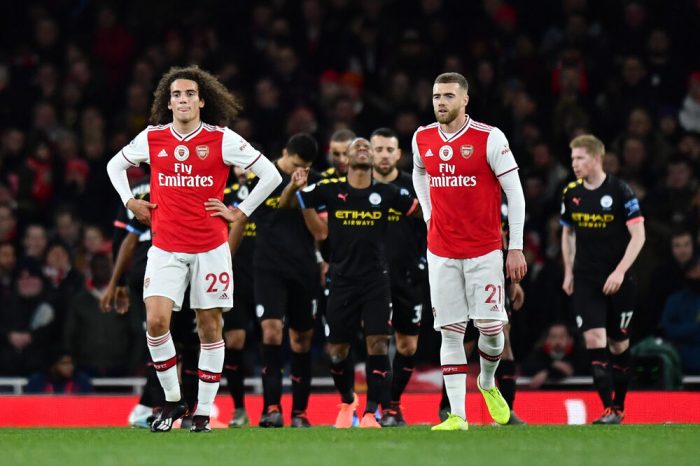 Things go from bad to worse for Arsenal

These really are dark days at the Emirates. With Freddie Ljungberg having won just one of four games in charge since taking on the role of interim boss, Arsenal welcomed Manchester City to North West London in this weekend’s showpiece fixture. Although Pep Guardiola’s side haven’t been at their best this season and lost to Manchester United last time out, they predictably swept Arsenal aside. City were 2-0 up within fifteen minutes and the game ended 3-0, with Kevin De Bruyne putting on a midfield masterclass.

Any calls for Arsenal legend Ljungberg to get the job full-time have now evaporated, with the Swede looking vastly out of his depth. Arsenal are a club in disarray, with Ljungberg himself complaining that academy coach Per Mertesacker is the only coach he has to work with following the departure of Unai Emery and his staff. Arsenal now sit ninth, 27 points off top spot. Close to the half-way point of the season, they’re behind Sheffield United and Wolves and level on points with Crystal Palace and Newcastle.

It’s crucial that the board get the next managerial appointment right after Emery’s failed spell. A range of names have been linked, including the likes of Max Allegri and Carlo Ancelotti. However, Guardiola’s assistant Mikel Arteta is the favourite and is now odds on to be named the next boss, with Arsenal chiefs pictured leaving the Spaniard’s mansion in the early hours of this morning. Despite being very highly rated and having learnt his trade under one of the world’s top coaches, it’s a huge task for anyone to take on as their first senior manager role, particularly with Arsenal being in the situation they are at this point in the season.

6 – Arsenal have gone six games without a win at the Emirates across all competitions (D3 L3), their longest run without a home win since between December 1994 and February 1995 under George Graham (eight games). Miserable. #ARSMCI pic.twitter.com/wMRqIMndSA

A major problem that the new Arsenal boss will have to deal with is the fact that the squad just isn’t good enough, due to years of poor investment. Aside from Pierre-Emerick Aubameyang and Alexandre Lacazette, there is simply a lack of quality throughout the team. The defence is a shambles, the midfield is sub-par and Mesut Ozil, who is supposed to be the side’s main creative outlet, put in another lacklustre display against City before reacting petulantly after being subbed off on the hour.

Arsenal have been mediocre for over a decade now, but for the most part were able to get away with it by finishing in the top four and securing Champions League football. But with the likes of Spurs having risen up over the years and Leicester now also looking to establish themselves among the country’s leading teams, Arsenal face the genuine threat of becoming yesterday’s club unless something changes at the top, and quickly.

It was another poor weekend for Chelsea, with Frank Lampard’s side losing 1-0 at home to Bournemouth after a late Dan Gosling goal. That was the Blues’ fourth defeat in five league games, with three losses coming against teams struggling for form in the Cherries, Everton and West Ham. Lampard will be keen to get to January and begin the hunt for reinforcements following the end of the club’s transfer ban.

Chelsea’s loss allowed their top-four rivals to make up more ground in the race for the Champions League places, with Jose Mourinho’s Spurs taking full advantage. They took three points from Wolves at Molineux, Jan Vertonghen scoring in the 91st minute to move Spurs three points off fourth, having been fourteenth when Mourinho took over. Tottenham could overtake Chelsea with a win when the two face off this Sunday in what promises to be a particularly fiery derby, with Mourinho’s move to rivals Spurs adding another dimension to what is already a fierce rivalry.

Manchester United are another side that made up some ground on Chelsea, though they could only manage a 1-1 home draw against Everton, with Marcus Greenwood getting the equaliser. It was another impressive result for interim Toffees boss Duncan Ferguson, who has put his name in the hat for getting the job until the end of the season. High-flying Leicester also dropped two points in a surprising 1-1 home draw against Norwich, meaning Liverpool’s 2-0 victory over Watford puts Jurgen Klopp’s side ten points clear in the race for the title.

The draw for the Champions League last-16 round has now been completed, and there are some mouthwatering ties to look forward to. The pick of the ties is undoubtedly Real Madrid vs. Manchester City, in a huge clash that neither side would have wanted. City have been some way off their best this season while Real have improved after a slow start, though both sides have quality in abundance and it promises to be a thrilling couple of matches.

Liverpool also got a tricky draw against Atletico Madrid, although the European champions will be full of confidence and expect to progress to the quarters, particularly with Atletico struggling this season. Chelsea have a tough tie against Bayern Munich, and the Germans will be favourites to progress over Frank Lampard’s young side even though they’ve been far from their best this term. Spurs got the best draw of the English clubs, though Bundesliga leaders RB Leipzig aren’t to be underestimated.

Borussia Dortmund vs PSG is a tie that promises plenty of attacking football, though PSG will be strong favourites. Barcelona will be relatively happy with the draw, having been matched with struggling Napoli, while Juventus have a favourable tie against Lyon. Atalanta and Valencia were drawn against each other, both being surprise names to make the last-16. The Italians extending their maiden Champions League excursion by beating Shakhtar 3-0 on Wednesday while Valencia topped their group courtesy of a 1-0 over Ajax, and both sides will fancy their chances of making the quarter-finals.

The British clubs participating in the Europa League have also learned their fate. The three Premier League sides will be relatively happy, with Man United up against Brugge, Arsenal facing Olympiacos and Wolves drawing Espanyol. Celtic and Rangers will also be confident of progressing to the next round having drawn Copenhagen and Braga respectively.

That result gave Real Madrid the chance to move three points clear at the top of the table, but Zinedine Zidane’s side could only manage a 1-1 draw away to Valencia. They were close to not coming away with anything, but a 95th minute equaliser from Karim Benzema ensured Madrid keep pace with Barca. The two draws mean Barca and Madrid stay level on 35 points, with the Catalans just ahead on goal difference.

Over to Germany and there is a new name at the lead of the league table, with RB Leipzig overtaking Borussia Monchengladbach. Leipzig moved top on Saturday courtesy of a 3-0 thrashing of Fortuna Dusseldorf, before surprise frontrunners Gladbach squandered the chance to retain their lead by losing 2-1 away to Wolfsburg, conceding agonisingly in the 91st minute. Borussia Dortmund beat Mainz 4-0 while Bayern demolished Werder Bremen 6-1, keeping the big two four and six points off the top respectively.

There were also significant results at the top of the table in Italy, with league leaders Inter drawing for the second game in a row, this time 1-1 away to Fiorentina. Juventus beat Udinese 3-1, with Cristiano Ronaldo getting two, to move level on points with Antonio Conte’s side, although they remain in second on goal difference. Elsewhere, Napoli’s torrid spell continued with a 2-1 loss away to Parma, laving the club sitting in eighth and 11 points off fourth place.