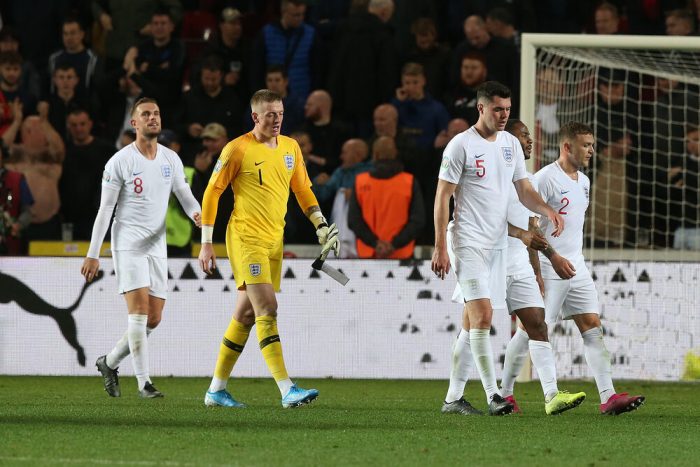 Bad week for the Brits

It was a pretty bad week all round for the British nations in the latest round of EURO 2020 qualifiers. England travelled to the Czech Republic on Friday to face their closest opponents in the group, but despite winning the reverse fixture 5-0, Southgate’s men could only limp to a 2-1 defeat.

While England remain top with a game in hand, the result means the Czechs are now level on points. More worryingly, however, was the passive nature of the performance. England offered little going forward, registering just seven shots to the Czechs’ 17, and the midfield pairing of Declan Rice and Jordan Henderson looked devoid of creativity. The defensive frailties were also on show once again, with Michael Keane tipped to lose his place to Tyrone Mings for the Bulgaria match which now takes on a heightened importance.

Elsewhere, Northern Ireland’s 3-1 defeat to the Netherlands means they now sit third, three points behind both the Dutch and Germany. It was always going to be difficult to qualify ahead of those two heavyweights, but Northern Ireland had given themselves a real chance having won every match prior to the Germany defeat in the last round of fixtures.

The manner of Thursday’s loss will particularly hurt, considering the team led 1-0 only to concede three goals in the last ten minutes. However, their generally impressive performances throughout this campaign will give them hope heading into the playoffs.

The Republic of Ireland could only muster a 0-0 draw away to Georgia in what felt like a missed opportunity for Mick McCarthy’s men. They will qualify with a win away to Switzerland on Tuesday, but that looks like a tough ask on paper. If they don’t get the win it could all come down to the last match against Denmark, who humiliated the Irish by beating them 5-1 in the sides’ 2018 World Cup playoff second leg.

Wales drew both their qualification matches last week, 1-1 away to Slovakia and the same scoreline at home to 2018 World Cup finalists Croatia. Both are credible results on their own, but they leave the Welsh now needING to win the next match away to Azerbaijan to keep their hopes alive.

It was dark week once again for Scotland, who endured yet another humiliating result, losing 4-0 away to Russia on Thursday. Scotland will have a chance in the playoffs, but judging on current form it would be a surprise to see them make the finals. The Scots did end the week with a 6-0 win over San Marino, though that result will do little to lighten the mood surrounding what has been a woeful campaign.

First teams qualify for next summer

The most recent round of qualifiers saw the first teams book their place in next summer’s EURO 2020 finals, with Belgium, Italy and Russia the first to make it. Belgium look particularly strong and will be serious contenders for the trophy, having gone close in the 2018 World Cup. Roberto Mancini’s new-look Italy also looks the best the country has produced for a long while, with a good mix of experienced quality and exciting youngsters. The Italians will certainly fancy their chances next summer.

This week’s games will also see more teams’ fate decided. England, Ukraine, Portugal, Netherlands, Germany, Ireland, Croatia, Spain, Croatia, Turkey and France could all book their spot depending on how the results play out.

It was a relatively quiet week in club football due to the international break, but one big story was AC Milan’s sacking of Marco Giampaolo. The Italian was given the boot with Milan sitting 13th in Serie A, having lost four of their opening seven matches and generally offering very little in most games. His dismissal after just seven fixtures means he holds the unwanted distinction of the shortest reign in the club’s history.

The man replacing Giampaolo is Stefano Pioli, who is unpopular to say the least with Milan fans due to the fact that he coached rivals Inter in 2016/17. The appointment also has a particularly underwhelming feel to it, with Pioli seen as little more than a safe pair of hands having thus far achieved little in his managerial career.

While Inter look to be returning to their former heights under the guidance of Antonio Conte, Milan continue to jump from one crisis to the next, with Pioli the club’s eight manager in just five years.