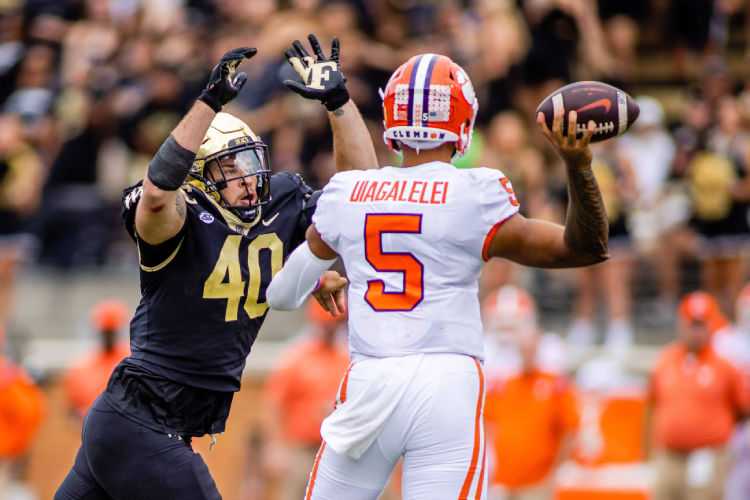 Our resident NCAAF experts Sam and Matt preview six of this weekend’s big matchups and give their betting tips, focusing on Michigan(4) at Iowa, Kentucky(7) at Ole Miss(14), Wake Forest(22) at Florida State(23), Alabama(2) at Arkansas(20), Oklahoma State(9) at Baylor(16) and NC State(10) at Clemson(5).

Whilst the Iowa offense has actually managed to score points the past 2 weeks, hosting a fourth-ranked Michigan is very different to beating Nevada and Rutgers. The points total seems low for a college football game as it seems Vegas is banking on the Iowa offense reverting to their Week one and two form – Michigan’s offense will move the ball down the field and rack up points in this one, despite a rowdy Kinnick at kick-off.

This Iowa team is completely insane. How is it even possible for a team to be 131st out of 131 FBS teams in Scoring Offense and the best in the nation in Scoring Defense?! This incredible defense will be put to the sword this weekend by the visiting Wolverines, who have been scoring points for fun so far this year. Everything suggests that this should be a cakewalk for Michigan, but of all people, Jim Harbaugh should know how hard it is to win in Kinnick Stadium. Michigan has lost its last four games in Iowa City, and Jim Harbaugh has never won at the Hawkeye’s home ground in either his coaching or playing career. While I’m not quite ready to take the Iowa Moneyline, I’m definitely happy to back them to cover.

The return of RB Chris Rodriguez for Kentucky is huge for an offense that has still been lacking explosiveness and will help lift the weight on QB Will Levis’ shoulders. Ole Miss’ defense has impressed so far, and carries a monster rushing attack to pair with it, ranking fourth in the nation with 280 yards a game on the ground – if the Wildcats can shut down Ole Miss’ vaunted rushing attack, they will feel pretty confident of grabbing the win. Rebels QB Jaxon Dart has been useful on the ground, but there is less confidence surrounding his passing game, and his opposite QB Levis has 10 passing touchdowns compared to Dart’s 5. However, I expect the Rebels to get good penetration against the Kentucky offensive line, leading to the Wildcats covering but Ole Miss holding on to the win.

I must admit my eyes lit up when I saw the spread for this game open up at +7. These two SEC teams are coming into this one 4-0, and have both looked impressive this season. Kentucky has struggled to run the ball effectively all season, but the returning Chris Rodriguez should make a huge difference for the Wildcats. Will Levis has played so well so far that there’s talk of him going in the first round of the NFL draft. I think this could be an absolute classic, and I have this one as a toss-up in my mind, so Kentucky to cover looks like a favorable bet to me.

Whilst FSU’s Week 1 win over LSU looks better and better as the season progresses, the next three weeks will define the Seminoles’ season and if they’ve truly turned a corner. They begin the gauntlet by hosting Wake Forest, who narrowly missed out in a thriller against Clemson who the Seminoles face in a couple of weeks time. In between that, FSU travel to NC State. I’m expecting points, and unfortunately for Wake, a repeat of their Clemson matchup as they go close in a shootout.

Had just a few plays gone differently for the Demon Deacons last week, we could be talking about them as a 4-0 top ten team. Their 51-45 loss to Clemson in overtime will have been hard to take for sure, but there were so many positives to take away, not least Sam Hartman’s 6 TDs and 337 passing yards. Florida State has gone from strength to strength this year, and was particularly impressive last week against Boston College. Like Sam, I can see a close points fest in which the Seminoles squeeze by, with Wake covering. I was inclined to go with the over, but history was against me there, as the under is 7-0 in the last seven meetings between these two teams, so I stuck with the points spread.

Arkansas lept out to a 14-point lead against A&M last week and seemed in total control until a fumble completely altered the course of the game. They disappointed me, themselves and pretty much everybody in the country outside of College Station in giving A&M a win they hardly deserve. Alabama crushed Vanderbilt last week, but it’s fair to say they struggled in their only real test this year at Texas. I expect another similar game, with Arkansas frustrating Alabama on offense in a gritty matchup, but the Crimson Tide ultimately sealing the win.

It was a tough loss to take for the Razorbacks last week against Texas A&M, given that they got out to an early 14-point lead. However, this is still a good football team, and they can cause anyone problems at home. The one time Bama has struggled this year was in a road game in a hostile atmosphere, and it’ll certainly be that in Arkansas this weekend. I’m surprised to see the points spread in the 60s, as I can see some good ol’ fashioned gritty SEC football in Fayetteville, with both defenses making plays.

A big rematch of last year’s Big XII Title Championship Game, which ended in heartbreak for the Cowboys after Baylor’s heroic goal-line stand in the last seconds. The Cowboys are rolling in 2022 with the number one points scoring offense in the country at 51.7 ppg. Baylor will be their first real offensive test. The Baylor defence under Dave Aranda lives in the backfield, and they’re one of the best in the nation against the run. The key for the Bears is how well QB Blake Shapen holds up against the Cowboys impressive pass rush and if he can get rid of the ball with speed and accuracy. Whilst it still may come down to defense at the end like last year, I do think we’ll see more this time from both sides on offense in a close one.

This one promises to be a fascinating matchup, as one of the best offenses in the entire country in Oklahoma State will go up against Baylor’s dominant defense. With Texas and Oklahoma both losing conference games last week, this game could have a big influence on who’s playing for the Big 12 title in December. Baylor has bounced back since their loss to BYU with a thrashing of Texas State and then an impressive win over Iowa State last week, but I’m taking the underdog Cowboys to lay down an early marker for the rest of the Big12.

QB DJ Uiagalelei silenced a lot of doubters in Clemson’s thrilling shoot-out win at Wake Forest (including a certain co-Author of this article…) as it seems he’s finally earning some of that sweet Dr Pepper NIL money. The Wolfpack defense is pretty mean and weather conditions are not looking great for Saturday, but despite last week, Clemson still has defensive playmakers too. With DJ starting to put it together, I’m backing the Tigers to cover in a soggy affair.

I’m not super happy about having shade thrown at me by my esteemed colleague in regard to DJ Uiagalelei’s performance last week. particularly when my record is so much better than his. Jokes aside, the Clemson signal-caller impressed last week, but this game against an NC State Wolfpack outfit that is coming into the game ranked in the top 10 for the first time since 2002 will be no easy game. Hurricane Ian is the thing to keep an eye out for in this game, as we aren’t completely sure how much it will affect proceedings in Memorial Stadium on Saturday evening, which is why Vegas has given us a low points spread. I do think Clemson will win here, but can see NC State covering. 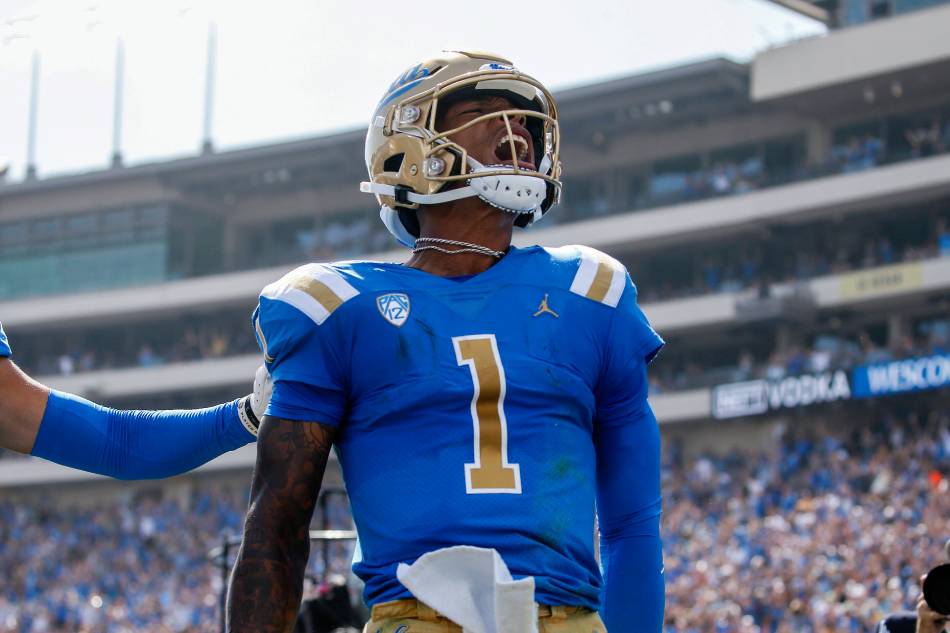 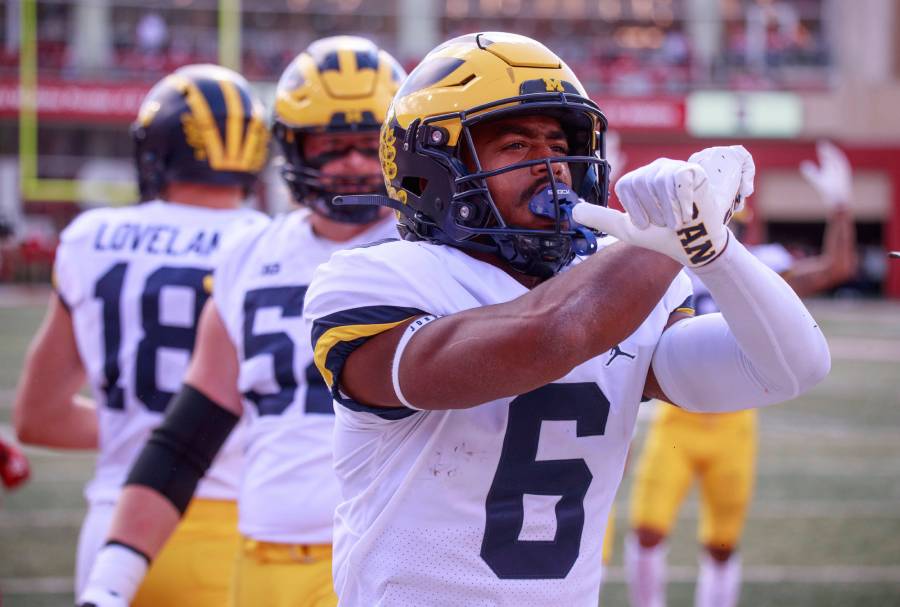