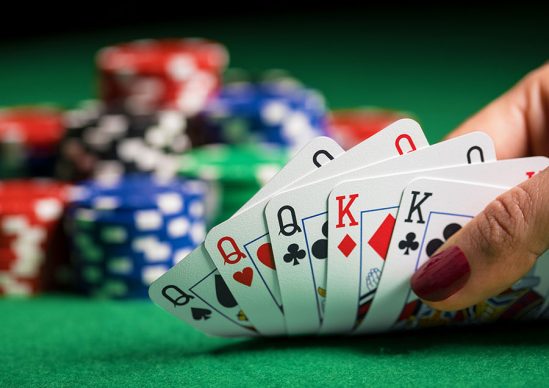 It’s easy to see why so many people love this poker variation. It’s filled with action and allows strategic players to show off their pre-planned move, but is also relatively simple for total poker newbies to get to grips with. Regardless of whether you’re a complete beginner or just want to give a new variation of poker a go, Compare.bet has picked out the best poker sites offering this exciting poker game. Let’s take a look at the key aspects of Omaha poker before you get started.

Just like other poker games, Omaha— also known as Omaha hold’em— uses a standard 52-card deck. As ‘hold’em’ style of poker, it uses community cards that can be used by all the players. In this variation, five community cards are drawn and each player receives four cards of their own. Players must make a full five hand choosing two of their own cards and three community cards.

How to play Omaha

Like all poker games, Omaha poker is played in rounds. Here’s a quick run through of how a game might unfold:

Wonder what makes your poker hand better than your opponent’s? Let’s take a look at Omaha hand rankings.

Cards from ten to an ace in the same suit. The specific suit doesn’t matter, as all card suits are deemed equal in poker.

Any straight with all five cards of the same suit.

Four of a Kind

Any four cards of the same rank.

Any five cards of the same suit, though these cards don’t need to be consecutive.

Any five consecutive cards, regardless of their suit. The ace can count as either a high or low card.

Three of a Kind

Any three cards of the same rank.

Any two cards of the same rank.

Any hand that doesn’t make up the above mentioned hands.

If two players are holding the same high hand, the player with the highest card value wins the pot.

Omaha Hi-Lo is another variation of this popular poker game, and is sometimes called Omaha/8 or Omaha eight-or-better. Unlike a standard Omaha game, where the pot is awarded to the player with the highest value hand, Omaha Hi-Lo sees the pot split between the best high value hand and the best low value hand. The low value hand must have five cards with a rank of eight or lower- the lower the highest card’s value, the better- and no pairs.

Now that we’ve covered the basics of Omaha poker, you’re probably ready to give it a go for yourself. Not sure where to start? Whether you’re in search of a poker site with plenty of poker variations, or an online casino that also offers roulette and blackjack, we’ve got the site for you. Check out our list of top UK poker sites to compare games and welcome bonuses, pick out your favourite and start playing!

What's the difference between Omaha and Texas hold'em?

Omaha and Texas Hold’em are fairly similar. The main difference is that, in Texas Hold’em players will receive two of their own cards, and can choose just one of them to make their hand. In Omaha, however, players are obliged to use two of their cards no matter what.

Can I play omaha for free?

Yes! Most poker sites offer free demo versions of games, which can be useful for beginners. However, taking advantage of no deposit welcome bonuses is another great way to play real money games without risking any of your own cash.

Should I employ an Omaha strategy to help me win?

As with any game of poker, you’ll need to employ a certain level of strategy to be successful. Poker is about making the right decisions at the right time, and knowing when to raise or fold. While a strategy can’t guarantee you a win— the hand you’re dealt is down to chance— it can help you make the best out of a bad hand. Try out some of your strategies on free poker games to see which work for you.

What is no limit Omaha poker?

Can I play Omaha poker on my mobile device?

Definitely. Virtually all online poker sites offer either a mobile-optimised web page or mobile app to players. This gives players access to all poker variations, welcome bonuses and payment methods on the go. You’ll even be able to use e-wallet options, including PayPal and Neteller, when playing on your mobile, so you needn’t miss out on a thing.

Danielle has six years of experience writing on a wide variety of topics, including online casino, sports betting and tourism. She has a BA in French with English from King’s College.