Our score: 67%
100% Welcome Bonus
In order to claim your 100% welcome bonus, simply make deposit into your account within 7 days of registering with Giant Lottos. Your bonus money will then be automatically loaded into your 'Gold Coin' account as soon as your deposit has been successfully made via credit card, Skrill, Neteller, token or other e-wallet. 18+. Full T&Cs apply. Please gamble responsibly. begambleaware.org
Claim Offer
Elegant designs and enormous jackpots are just some of the reasons why Giant Lottos is one of the most popular lottery sites out there
Mobile site
12 lotto games 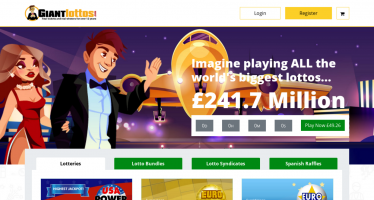 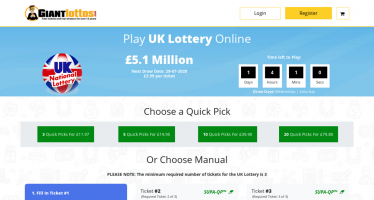 Giant Lottos is one of the most extensive lotteries focused betting sites in the UK right now. It has a selection of some of the most popular lotteries played in the nation, yet it also provides members with access to a series of international and smaller lotteries too. It has been doing this successfully for many years already, and it would appear that Giant Lottos is going from strength to strength in 2022.

Users of this site can now participate in individual lottery draws, syndicates, as well as bundle plays. There really is an amazing range of lottery options for those who choose to sign up with this site. If you feel like giving it a try yourself, simply open an account today to get things started.

Having been in the game for more than 12 years now, Giant Lottos has managed to prove itself as one of the premier lottery betting sites in the UK. Since the early days of only offering access to some of the more major lotteries, Giant Lottos now provides access to international draws, as well as the smaller and more unique lottery draws. This diversity is just one of the many reasons why Giant Lottos has a growing member base right now.

The site has more than 150,000 registered members, which is quite a large number by anyone’s standards. It’s great customer reviews also show that the site has a fantastic reputation which always bodes well for a site with more than a decade in the game.

Concerning the actual games and features of the site, Giant Lottos has clearly spent a great deal of time and effort in building its offerings. It now provides members with direct access to 8 of the largest lotteries held in the world, including the US Powerball, Euro Millions, Euro Jackpot and Mega Millions. The jackpots for some of these games are larger than 70 million-pound at the time of writing, which would be a life-changing amount of money should you get lucky. Of course, the likelihood of winning such lotteries are incredibly small, but it’s still well worth a shot.

As you are probably aware, there are many online lottery sites available in 2022, so what is it that makes Giant Lottos so unique? To answer that question, we will need to dive into some of the subcategories available with this site, including lottery bundles, syndicates and Spanish raffles.

First of all, the lottery bundles provide a way to participate in multiple lottery draws with the purchase of just one entry ticket into lotteries with some enormous jackpots. For example, the All Draw Bonanza Bundle has a payout of close to £220 million, and following that, the Giant 4 Favourites is close to £180 million at the time of writing.

Finally, you can always flick across and participate in some of the Spanish raffles. This one is known as the ‘Loteria Nacional’, and you can play it in both individual and syndicate forms.

Giant Lottos clearly has an amazing product offering for all those to take the initiative and sign up with the site. However, things get even better when you look into the welcome bonus that this site has available. All new customers who decide to sign up with Giant Lottos today can enjoy a 100% welcome boost on their first deposit. This gives new members a chance to double their money right off the bat, and there is up to £20 for grabs directly through this welcome offer.

This initial bonus does need to be made using a debit card, however, and you’ll need to deposit £10 to get it. In addition to this, the £10 deposit needs to be made within 7 days of actually opening your new Giant Lottos account. Failure to do so will mean that you do not actually get to participate in the welcome offer. This is why it is important to be relatively quick on the trigger to cash in on this bonus and use your free bets to participate in any of the lottery draws that take your fancy.

When you compare the available banking methods at Giant Lottos to other lottery sites in the UK, it has a fairly standard range of options. It’s not like there are tons of methods open for members to use for deposits and withdrawals, but at least Giant Lottos has the most popular and indeed the most trusted methods covered. See the available methods supported by Giant Lottos in the two categories below:

Clearly Giant Lottos has chosen not to implement some of the other popular payment methods you can find online today, but that shouldn’t reflect badly on the site. It is perfectly normal for online lottery sites to have a range of around 5 or even fewer payment methods, which is precisely what Giant Lottos has. Besides this, it is actually quite a friendly site with a standard minimum deposit of just £5 to get started on the site. This is also the minimum withdrawal amount when you want to get your hands on any winnings.

Thanks to the e-wallets listed as valid banking methods, including Skrill and Neteller, you can conduct extremely quick transactions. This is particularly effective when it comes to withdrawing your cash from the account, as withdrawing via e-wallets could mean that the money arrives to you within 24-hours.

You can pay by:

You can withdraw by:

If you ever experience problems with your account and you wish to contact customer support, you’ll be glad to know that Giant Lottos has two methods for you to do so. These available methods include an email support system as well as a telephone number, although there is no live chat at the time of writing.

Both the email and phone channels are monitored from Monday to Friday between the hours of 9AM and 5PM. .

If you are looking for a site that specialises in lottery betting, then Giant Lottos is definitely a strong candidate. We have yet to come across another site that offers such an extensive and interesting range of lottery options, especially when you look at sub-categories such as Spanish Raffles and syndicates. While this provides flexibility in terms of what lotteries everyone can play on this site, the most enticing features are the huge lotteries that Giant Lottos supports.

With jackpot prizes that far exceed £100 million, along with the opportunity to play these as part of a group and as an individual, Giant Lottos is a site that has raised the bar for all other lottery sites. Feel like trying your luck and entering some of the largest and most exciting lotteries available today? Just sign up to get the ball rolling.

Gavin Davison
Gavin Davison
Gavin is a writer for Compare.bet, contributing to our expert online reviews. Gavin has over two years of experience writing about topics including online casino and sports betting.
Privacy & cookie notice Just so you know, this site uses cookies to give you the best possible experience. Close