Our score: 68%
Deposit £25, Play with £45
The Deposit Deal Bonus is awarded to members upon making their first deposit in their Lottosend account (Initial Deposit, Cashback Bonus, First Cashback Bonus and First Time Bonus all refer to the same Deposit Bonus). • The Deposit Deal bonus is granted only one (1) time per player and members who benefit from this bonus will not be eligible for any other first deposit promotions. Similarly, members who have benefited from another first deposit offer shall not be eligible for this bonus, unless stated otherwise. 18+. Full T&Cs apply. Please gamble responsibly. begambleaware.org
Claim Offer
With one of the widest selection of games on the market and promotional offers hand picked by an expert team, what is not to love about Lottosend
Android, Mobile site
13 lotto games 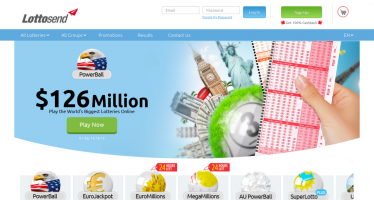 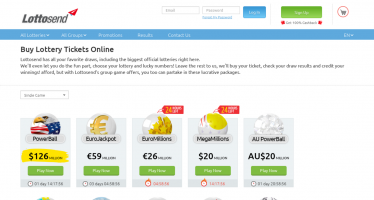 LottoSend may have only been in the game for a few years, but it has already established itself as one of the leading lottery sites in the UK. This is reflected in the number of lotteries offered through its services, as well as the large number of members that have already chosen LottoSend as their go-to online lottery site. With more than 15 different lotteries available, users of this site are never short on options and lotteries to participate in.

To name some of the larger lottery draws that are available, players are able to participate in draws such as PowerBall, Mega Millions and the EuroJackpot. At the time of writing, the PowerBall payout is more than £70 million while the EuroJackpot is approximately £30 million. You can buy one or more tickets into these draws, all of which can be done directly on the LottoSend site.

The only downfall with LottoSend is that you cannot participate as part of a syndicate. All of the lotteries are only open to take part in on an individual basis, which does somewhat limit the options open to you from a gaming perspective. This minor inconvenience, however, does not diminish the overall value of what LottoSend offers its growing number of members. This is still a diverse and highly secure online lottery site and, with potentially millions of pounds on the line, these factors are critical.

In addition to the larger lotteries that we have just mentioned, LottoSend also gives players access to many smaller lotteries. These include the likes of AU PowerBall, Lotto Ireland, Lotto 649 and UK Lotto. With ticket prices starting at just £1 for some of these lotteries, LottoSend is not a site where you need to invest a ton of money so get a share of the excitement.

If you are a new player who is looking to sign up with LottoSend, you’ll be pleased to know that there are a couple of welcome offers on the table. First of all, LottoSend is offering a deposit match on each player’s very first deposit and there are varying degrees of free cash available. If you choose to deposit £25 you will receive £20 in bonus cash, if you deposit £30 you’ll get £30 and if you deposit £50 you’ll get £30.

As you can see, tiers two and three offer the most rewards in terms of bonus cash. But aside from the deposit match offer, there is another promotion that you could claim instead. This is referred to as the cashback offer and this offer is given after you have purchased your first ticket on the site. Basically, you can purchase up to £30 worth of lottery tickets and receive 100% of the value back in bonus cash thanks to this promotion. This means that if you do make use of the full £30 allowance, you will receive the full £30 back into your account.

While you can see that there are two different welcome offers open to new players, it is important to stress that you must choose one or the other. Unfortunately, it is not possible to claim both of these welcome offers with LottoSend. With that being said, do take your time when choosing the welcome offer that you feel is right for you.

What’s particularly admirable about using LottoSend in terms of payments is that all of the deposit methods can be used to make withdrawals too. This isn’t always the case with online lottery sites, and it is a common complaint of users that the range of withdrawals is significantly fewer than for deposits. LottoSend has completely reversed this common complaint, however, as the entire range can be used to initiate both forms of transactions. Things get even better when you come to the actual logistics about how these methods work too.

To begin with, there is just a £10 minimum enforced for deposits and withdrawals. This is relatively low, and it allows you to deposit and withdraw funds without needing hundreds of pounds in your account to do so. On top of this, there are no fees charged to process transactions whatsoever. Finally, LottoSend will pay out on customer winnings very quickly, particularly through methods such as Neteller and Skrill, where you can receive your money in under 48 hours.

You can pay by:

You can withdraw by:

As great as the LottoSend site is, it goes without saying that sometimes things might not go to plan from a technical point of view. This is where it is important to have access to a solid customer support team, which is exactly what LottoSend has in place. It has a team that is constantly monitoring the email support system through the address you can see below, and they typically respond through email within a couple of business days.

Interestingly, LottoSend does not have a phone number that members can call and it does not have any live chat in place. While this may reflect in a negative light, members have started to raise concerns with LottoSend through social media channels such as Facebook. Of course, this is completely free for you to do, and support representatives are extremely on the ball with responding via social media.

If you’re searching for a trusted and exciting online lottery site, we have to say that  LottoSend definitely fits this description. We are pleased that it has a proven track record, having been in the industry now since 2013, and we are more than happy with the offerings that are available through this site. Being able to securely enter lotteries from all over the world is something that few other brands have been able to implement, and this is a credit to the professionalism of the LottoSend brand as a whole.

If you want to get right into the thick of things and try your luck with some of the world’s largest lotteries, why not register today?

Gavin Davison
Gavin Davison
Gavin is a writer for Compare.bet, contributing to our expert online reviews. Gavin has over two years of experience writing about topics including online casino and sports betting.
Privacy & cookie notice Just so you know, this site uses cookies to give you the best possible experience. Close