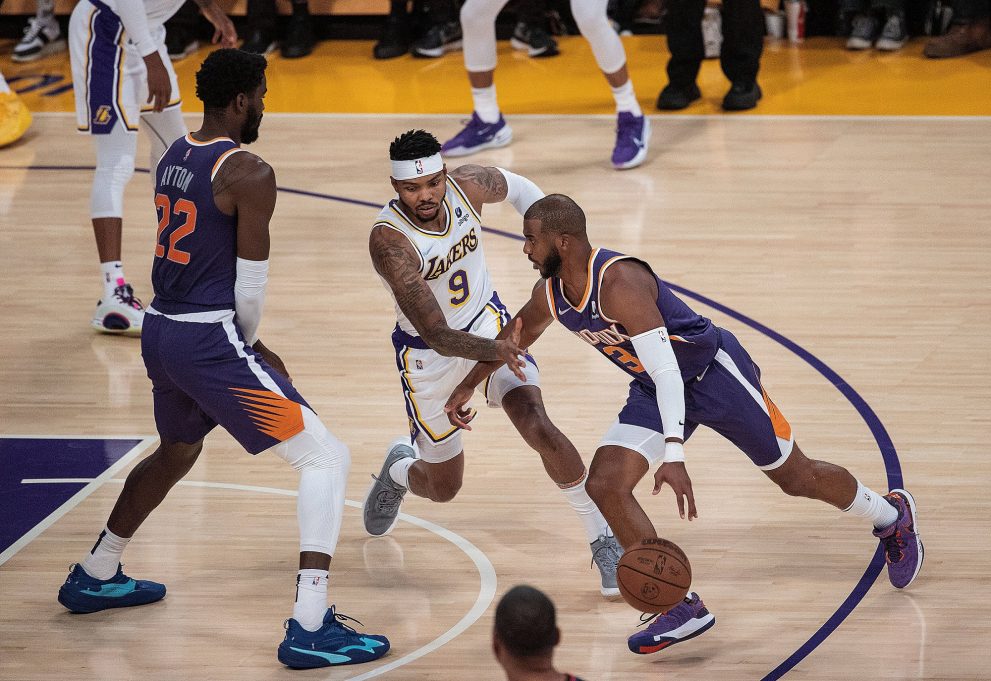 The NBA season is a month old so it’s not too soon to ask this question: Which team should be considered the favorite to win the 2021-2022 title?

The Golden State Warriors, you say?

Golden State was 12-2 as I was writing this, Steph Curry is still doing ridiculous things like making 3-pointers from the logo, Klay Thompson should be back in December and Draymond Green is playing as well as he has in years.

As long as James Harden and Kevin Durant stay healthy the Nets — even without guard Kyrie Irving — have to be considered title contenders.

The Los Angeles Lakers? Well, they’re old, their defense is suspect and who trusts Russell Westbrook in the playoffs, but LeBron James always seems to find a way.

We haven’t even mentioned the defending champs Milwaukee Bucks, the Utah Jazz or the Denver Nuggets, assuming point guard Jamal Murray returns from his ACL surgery late in the season.

But what if we were to tell you all of those answers are wrong, that the team to beat made the NBA Finals last season, returned its entire starting lineup and added two important pieces off the bench.

Yes, the Phoenix Suns should be the favorite to hold a hot-as-hell parade come late June.

Why the Suns, you ask?

I’ll tell you, in four parts:

Of all the contenders mentioned above, only the Suns return — for the most part — the same group that won the Western Conference last season. The one loss of any note was backup forward Torrey Craig, and Craig’s departure didn’t set off any alarms; he averaged just 12 minutes a game in the postseason.

As a result, the Suns aren’t trying to adjust to new personnel. They know how to play with one another, how to accentuate their teammates’ strengths and how to mitigate their weaknesses.

Phoenix not only is doubling down with its starting lineup — center Deandre Ayton, forwards Jae Crowder and Mikal Bridges, guards Chris Paul and Devin Booker — it filled its two biggest needs in the offseason by signing free agent center JaVale McGee and trading for sharp-shooting guard Landry Shamet.

The Suns didn’t have any size to speak of last season if Ayton got into foul trouble or was on the bench. Dario Saric and Frank Kaminsky got the big man reserve minutes and both are better suited to play power forward. McGee solves that problem. The 7-foot, 14-year veteran gives Phoenix a defensive presence at the rim and someone who can go get the ball after missed shots; he’s averaging 7.0 rebounds per game in just 17 minutes of playing time.

Shamet, meanwhile, gives Phoenix a much-needed backcourt scorer off the bench should Booker have an off night. He’s shooting 39.2 percent from 3-point range and that percentage should improve as he learns how to play off Paul and backup point guard Cam Payne.

But it’s the perfectly assembled starting lineup that could very well lead Phoenix to its first championship. If a GM was going to construct a basketball team, he could do far worse than copying the Suns.

A point guard — or Point God, in this instance — who can score and play defense, but his biggest strength is making everyone better around him. An NBA superstar at off guard. (Yes, Booker is a superstar. If you haven’t figured that out by now, you haven’t been paying attention.) An elite 3-and-D player in Bridges; Portland’s Damian Lillard recently told Yahoo Sports that Bridges is his “favorite small forward in the league.”

Then there’s Crowder — or Cam Johnson if you prefer — both of whom can space the floor with 3-point shooting and finally, Ayton, a center who can change games with his defense and doesn’t have to take 20 shots a game to be productive.

When ESPN’s blockbuster story about owner Robert Sarver was published — the story alleged Sarver created a toxic workplace and made racist and misogynistic remarks — some worried it would cast a pall over the season and be a huge distraction to what the Suns are trying to accomplish.

That hasn’t been the case — Phoenix had won nine straight games heading into Wednesday’s game against Dallas — and it won’t be the case because of the respect the players have for coach Monty Williams and general manager James Jones.

Will Chris Paul, Devin Booker and #2 in the West Phoenix make it 10 in a row?

Find out tonight as they take on Dallas at 10pm/et on ESPN pic.twitter.com/kxMgkVIqhX

Plus, they understand what’s at stake, that a championship is within their reach. They’ll let the Sarver accusations play out in stories and statements and focus on those 48 minutes on the floor.

That’s what leadership looks like, from the GM’s office, through the head coach, to Paul and Booker.

The Suns’ decision not to offer Ayton a max five-year, $173 million extension still doesn’t make sense. Ayton proved in the second half of the 2020-2021 season and again in the postseason that he had grown up, become a more consistent player and was one of the few big men who could stay on the floor when teams went small (see Utah and Rudy Gobert against the Los Angeles Clippers for why that’s so important).

Fortunately for the Suns, Ayton is not the kind of guy who’s going to pout over the slight. For one thing, Paul won’t let him. But Ayton now has an opportunity to prove to other teams what he’s worth. That often is a huge motivation for professional athletes in their contract years, and the guess here is that Ayton will have the best season of his young career.

That’s good for the Suns — until they will have to match the monstrous $207 million offer that will surely come Ayton’s way as a restricted free agent.

I was going to give Paul and Booker their own space, but then I had this thought: Together, are they the best backcourt in the NBA?

Irving and Harden might claim that distinction, but Irving is MIA. Curry and Thompson were the backcourt champs in the past, but Thompson hasn’t played in two seasons because of injuries, and no one can be quite sure how he’ll look when he returns.

Utah’s Mike Conley and Donovan Mitchell? Sorry, but I’ll take Paul — who’s leading the league in assists (10.2) and steals (2.6) heading into Wednesday’s games — over Conley, and Booker does not take a back seat to Mitchell.

The Phoenix Suns have won 9 in a row. #ValleyProud pic.twitter.com/tbr35E0FgK

The only other backcourt worth mentioning is Lillard and C.J. McCollum in Portland but they’re undersized and deficient defensively.

No, it’s Paul and Booker and in an NBA where size isn’t the all-encompassing advantage it once was – Milwaukee’s Giannis Antetokounmpo being a notable exception — having the best guard combo in the league is a significant head start on the way to a possible title.

(By the way, how in the world did the Oklahoma City Thunder not insist on acquiring Bridges in the Paul trade? Of the players the Thunder got back — Kelly Oubre, Ricky Rubio, Ty Jerome and Jalen Lecque — only Jerome remains on the roster, and he’s averaging 12 minutes a game.)

Now, I’m not saying the Suns will win the NBA title. It’s a long, long, long way until June. But if you’re making a list of championship contenders, Phoenix shouldn’t be somewhere in the top five.

It should be at the top.