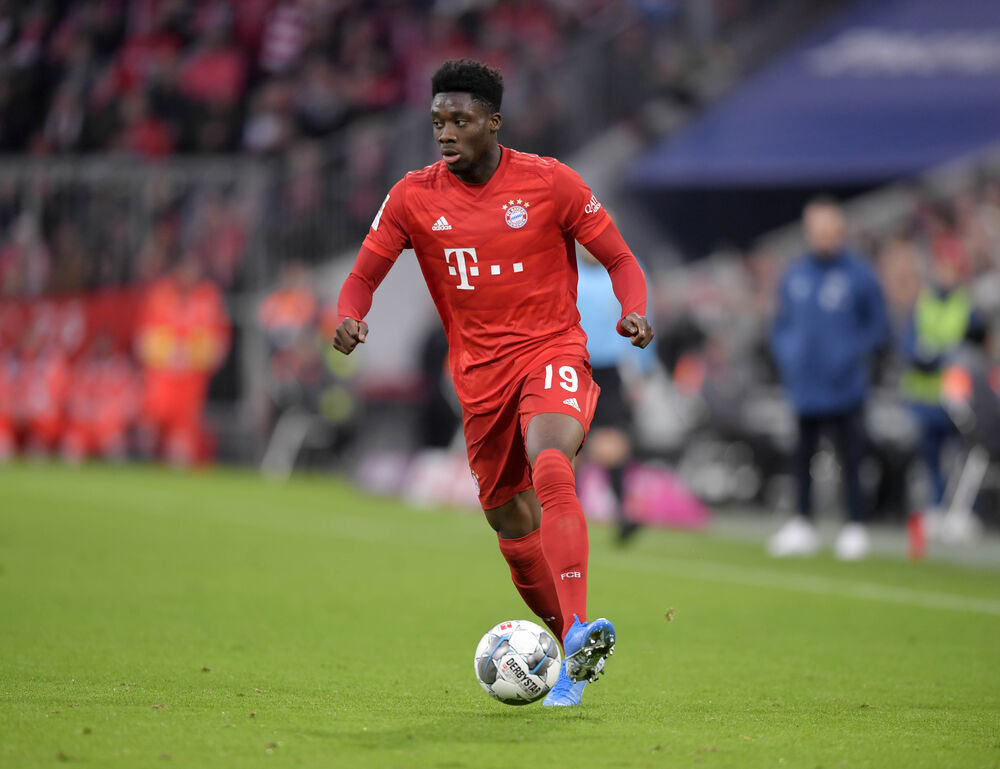 For Alphonso Davies, the last 12 months have been about adjusting to a new life. It started at the turn of the year,  when he joined Bayern Munich for an MLS-record transfer fee, after signing a contract with the Bavarian club in July 2018. As he landed in Munich the teenager’s name was echoing around the globe.

🗣️ @AlphonsoDavies: "I'm very happy about my transfer to #FCBayern. As a kid, you dream about this moment and I'm happy it came through. Now it's time to continue working, I have to give everything to make the most of this opportunity." #MiaSanMia pic.twitter.com/JTZ51T0ZEr

He got the first glimpse at his new life when he received an Instagram message from Bayern defender Mats Hummels. The World Cup winner was welcoming the teenager to the club, the biggest in Germany.  While such a situation might overwhelm the average person, it has been clear for many years that Davies is anything but middle of the road.

His early life was defined by struggle. Despite being seen as the future of Canadian soccer his story starts some 10,000 kilometres away in a refugee camp in Ghana.

“You’re going somewhere and you have to cross over bodies to go and find food,” said Davies’ mother, Victoria, in 2017. “So the best thing to do was to just get out.”

“It was hard. It was dangerous. It was hard to live there,” Davies’ father, Debeah, said in that same year. “Because the only way you survive sometimes is you have to carry guns too. We didn’t have any interest in shooting guns.”

The family had moved to Buduburam, a refugee camp just west of Ghana’s capital city, Accra, where Alphonso was born in 2000. His parents were fleeing the civil war in Liberia. They eventually moved to Canada when their son was five-years-old.

Once there, they settled in Windsor, Ontario, and Davies was exposed to snow for the first time. “I ran outside in just shorts and a t-shirt,” Davies later recalled. “The snow was coming down, and I was like, ‘Wow, this is nice.’ But it was too cold, so I ran back in the house.”

“As soon as I saw him play, I knew that he had exceptional athleticism and talent,” Bossio said.

It took teammate Giles Barnes only one session to see that same precocious talent in Davies.

“He was messing around with the ball in a warm-up, and I thought, ‘Yeah this kid is going to be decent,’” Barnes told iNews when recalling his first impressions of Davies. “Then you look at him as a specimen – his frame, his size, his pace, his athleticism – it’s up there with the best I’ve ever seen. You should have seen some of the stuff he was doing to guys in training. Honestly, I think he could have made his debut a little bit earlier.”

Barnes joined the Whitecaps in late July, 2016, and a few weeks later Davies was preparing for his MLS debut at the tender age of 15. The two bonded quickly, and Barnes saw someone he could mentor. The former Derby County youngster had wrestled with a similar weight of expectation when emerging into senior football.

“It was honestly like being his big brother,” Barnes said. “I was his driver, his chef, everything you can think of. I used to take him to get his haircut. I literally had this kid with me every day and it was a pleasure.”

The notion of a teenage phenom is nothing new in MLS. Freddy Adu is viewed as a cautionary tale about what pressure and expectation can do to a promising youngster. That is where Barnes credits Whitecaps manager Carl Robinson.

“I think Robbo did a great job of managing him,” Barnes said. “His MLS debut was completely earned. He made Alphonso come to me, and I roomed with him — he didn’t even know how to iron his own shirt.

“Before games, I’d go and pick him up, bring him to my house and make sure he looked good. One time he came over and I asked him if he had anything to eat. I started to make him something and as he’s getting ready he pulls out this dress shirt and it’s all crumpled. He starts getting ready, and I’m like ‘What are you doing?’ And he’s like ‘What?’ I said to him, ‘Bro, you can’t go into a stadium like that.”

That support structure, both with the Whitecaps and at home, was vital during his early development as a professional. In terms of qualities that make Davies stand out, Barnes pointed not only to Davies’ voracious desire to learn about the game but also his humility, which was instilled in him by his parents.

As one story goes, his mother refused to take a bag of Whitecaps gear offered to her by academy director Craig Dalrymple during one of his visits — a small incentive for him to sign a letter of commitment with the club.

“He’ll take that when he deserves it,” Dalrymple remembers her saying. “Right now, he’s still in Edmonton.”

By the time Davies joined Bayern, Barnes was already predicting big things for his former roommate. He felt Premier League clubs had missed a trick in not securing ‘Phonzie’ and if 2019 has been any indication of the future, it would seem he was right.

“He loves his family, and he loves to dance, but he’s also hungry,” Barnes says. “He won’t let anything stop him. Young kids, when they come in to train, they don’t try to win the beep test. They don’t try to embarrass the older pros, but he’s someone who wants to be the best.”

Such a mentality has served Davies well with Bayern. The club were understandably keen to ease him in slowly and during his first six months at the club, he accrued just 74 Bundesliga minutes, notching one goal. This season saw things start at a similar pace before he broke into the starting line-up in October.

12 starts in a row for @AlphonsoDavies.

Operating in an unfamiliar left-back role has been a challenge that Davies has relished. The trademark speed and dribbling from his days in Vancouver are still there, (he lead MLS in dribbles in 2018, averaging 4.2 per game) but he is slowly adding consistency and end product to his repertoire, as evidenced by his recent assist against SC Freiburg; Davies carried the ball some 60-yards, flying past three Freiburg players before putting the ball on a plate for Robert Lewandowski to finish.

This season, he is second only to Kingsley Coman in dribbles and recording more than one key pass per game. The defensive aspects of his game, such as positioning, remain a weakness, but patience will likely prevail as he continues to learn the nuances of playing at full-back.

“Being able to transition from a winger to a left-back was pretty easy for me because during my time at Vancouver I used to play there as well. So me playing left-back is just about learning the position more and more. I have a guy like David Alaba beside me who is one of the best left-backs in the world and he’s helping me out.”

October was also an important month for Davies at an international level. The teenager was the standout performer during a 2-0 Concacaf Nations League victory against the United States. It was the first time Canada’s men had beaten their American counterparts since 1985, and appeared to be a landmark moment for Davies.

“When you see the kid that comes in after being at Bayern Munich,” coach Jon Heardman told the Athletic, “he’s not the same kid. Trust us.”

Granted, the year has not been perfect. Davies scored an embarrassing own goal against Bochum in the German Cup. Away from the pitch, he was late for a training session after a security issue at Munich Airport delayed his return from Paris where he had been to see his girlfriend, PSG striker, Jordyn Huitema. He was subsequently fined €20,000 by then-coach Niko Kovac.

In the wider context, these are small issues that shrink further when placed next to his accomplishments. Davies is the face of Canadian football and an emerging star in the Bundesliga. 2020 will bring with it more change and challenges as he looks to make the left-back role his own at Bayern, but he, more than anyone, seems primed to handle it with ease and emerge as one of Europe’s best full-backs in the long-term.