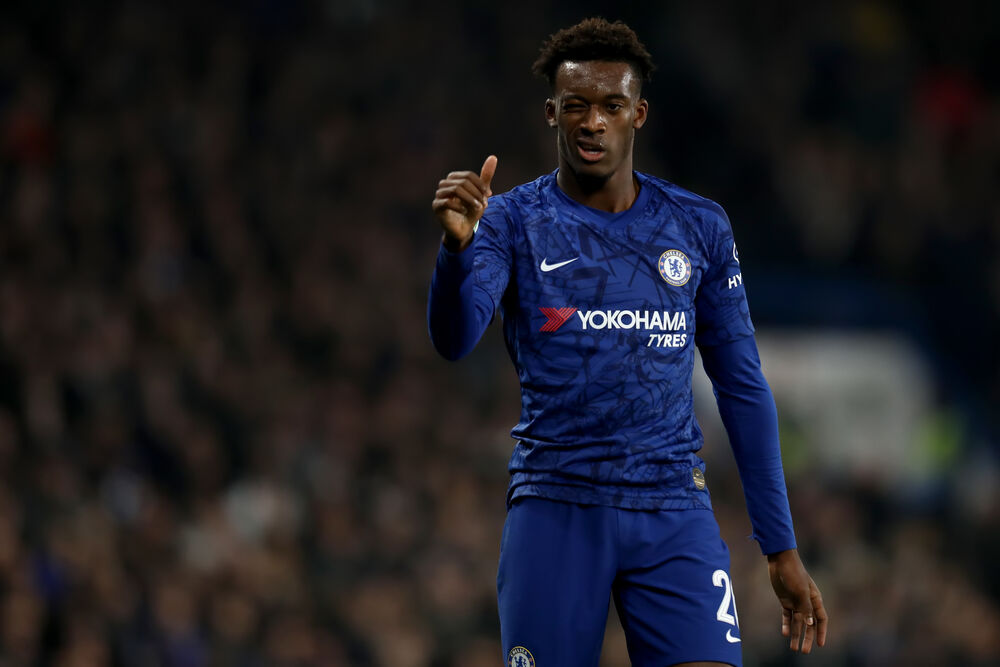 Despite not actually playing a great deal of football, Callum Hudson-Odoi has been one of the most talked about young footballers of 2019. In 24 appearances and just 12 starts under Maurizio Sarri, the 19-year-old winger impressed enough to warrant a £35 million bid from Bayern Munich in January. After recovering from a ruptured Achilles tendon suffered last April, Hudson-Odoi will hope 2020 is the year he cements his place in the Chelsea team.

Callum Hudson-Odoi is a name that has long been on the lips of Chelsea fans. With the Blues since the age of 7, he saw plenty of success in the club’s youth teams, playing a key role in the under-18’s FA Youth Cup triumph and earning promotion to the under-23 team at the age of just 16. He made his first-team debut at 17, coming off the bench in an FA Cup tie against Newcastle. Antonio Conte handed Hudson-Odoi his Premier League bow just days later in January 2018, coming on as a substitute in a home loss to Bournemouth.

The winger would make just one further league appearance that season, but he made a big impression during the following preseason, under newly appointed Maurizio Sarri. Starting all three games and providing a threat with his dribbling, pace and crossing ability, Hudson-Odoi’s performances over the summer were good enough to earn a start in the 2018/19 Community Shield defeat to Manchester City.

Maurizio Sarri on Callum Hudson-Odoi: "In the future he will be a very strong player. Will he be in the first-team squad? I think so. He will be staying with us for all the season." pic.twitter.com/LoSyu42xf4

That may have seemed like a sign of things to come, but the teenager found playing time hard to come by under Sarri. With the likes of Eden Hazard, Willian and Pedro ahead of him, Hudson-Odoi failed to make a Premier League matchday squad in the first half of the season. Mainly restricted to cup action, he scored his first senior goal for the club against PAOK in the Europa League on November 11. Chelsea fans had little to complain about at the time, with early results positive under Sarri. However, calls for Hudson-Odoi to see more game time increased as the club began to struggle following the turn of the year.

With Alvaro Morata and January signing Gonzalo Higuain failing to impress in the number 9 role, Sarri often opted to play Eden Hazard as a false 9, making Hudson-Odoi’s route to the teamsheet—-or at least the squad—-somewhat easier. With his directness and ability to deliver dangerous balls from the wing contrasting with the often frustrating Willian and Pedro, Hudson-Odoi made an increasing impact, though mostly still from the bench.

The winger was finally handed his full Premier League debut against Brighton, in which he registered an assist, beating his man and putting in a dangerous low cross to Olivier Giroud for the opening goal of a 3-0 victory. That made him the youngest player to assist a goal in the Premier League that season, aged just 18 years and 146 days. He started the next three league games before an injury against Burnley cut his season short just as it was gaining momentum.

The youngest player to provide a Premier League assist this season. 🔥 pic.twitter.com/nr1QG76xtS

Despite being ruled out for the rest of the season, Hudson-Odoi’s performances had attracted attention from some of the continent’s leading clubs. A natural dribbler comfortable on either foot and blessed with pace, unpredictability and the ability to play decisive balls, Bayern Munich saw him as the perfect successor to departing legends Arjen Robben and Franck Ribery. The Germans went in with another bid that Chelsea rejected, the club hoping to convince the winger to extend his deal which had just a year left to run.

Their aim to tie Hudson-Odoi down was greatly helped by the appointment of club legend Frank Lampard this summer, who had carved out a reputation for improving young players during his spell at Derby. After being appointed Chelsea boss in July, Lampard said that the winger “can be central to this team, he can be central to England. He can show, right here at Chelsea, the team he came through the academy at, that he is going to be a world-class player – because I truly believe that.”

That faith played a key role in Hudson-Odoi singing a new five-year contract at Chelsea in September, despite having handed in a transfer request the previous January. The 19-year-old said in November that it took just one chat with the new Chelsea boss to convince him to stay, adding: “He wants me to play for him. They were encouraging signs that you want to hear from a manager […] he just said he believes in me, he wants to work hard and if I believe in myself then he believes in me and things will go well for me at this club.”

"He's worked hard to get one foot into the first team and the contract felt like it was what everyone wanted. I believe in his talent."

Hudson-Odoi hasn’t had it all his own way since his return to fitness at the end of September. With Willian’s improved form under Lampard and new £58m singing Christian Pulisic also in contention for minutes, Hudson-Odoi has been restricted to just three league starts, along with ten substitute appearances. However, he’s still managed to rack up three league assists, averaging 0.67 assists per 90 minutes. That’s a superior rate to the likes of teammate Willian and James Maddison, who have respectively averaged 0.25 and 0.16 assists per 90 minutes so far this season.

The game against Newcastle on October 19 showed just what Hudson-Odoi can do. Given a starting role, the 19-year-old delivered a man of the match performance, proving a constant threat down the left side of the Chelsea attack and assisting Marcos Alonso’s winner – his fourth game in a row with an assist. His his best attributes were on display – dribbling, passing, two footedness, and the willingness to have a shot at goal. He’s a player that gets fans off their seats – something Chelsea fans have been lacking since Eden Hazard’s summer departure.

Since then, however, the winger has largely started games on the bench and found consistency hard to come by. There have been some frustrating performances, notably a disappointing display when starting for England against Kosovo on November 17. Hudson-Odoi has also struggled after being brought on in recent games against Lille and Bournemouth, with the Chelsea team as whole going through a patch of bad form, but a recent man-of-the-match performance against Nottingham Forest in the FA Cup should restore some confidence.

Lampard has recently touched on his reasoning behind using Hudson-Odoi sparely and also reiterated his faith in the winger: “I think his best is to come because he’s just turned 19 so he’s in the real early stages of his development and coming back from a very serious injury. We’ve got competition in wide areas and he’s going to get better and better. He has to apply himself in training every day, he has to show when he comes on for periods of games what he can do.”

11 – Callum Hudson-Odoi has been directly involved in 11 goals in his 13 starts at Stamford Bridge for Chelsea in all competitions, scoring five and assisting six. Alternative. pic.twitter.com/eDH7g1lbg1

There’s no doubt Hudson-Odoi is still raw and a long way from being the finished article, and in some ways he still remains somewhat of an enigma. He’s clearly a very talented player, although a lack of starts makes it difficult to judge just how good he is at this point. His route to the first team could also be about to become more difficult – with Chelsea being linked with a big-money January move for the likes of Jadon Sancho and Wilfried Zaha now that the club’s transfer ban has been lifted. If either of those moves come off, Hudson-Odoi could once again find himself as Chelsea’s fourth choice winger.

2020 could prove to be a make or break for Hudson-Odoi. There’s no doubting Hudson-Odoi has the potential to be a star, but clubs like Chelsea rarely have too much patience when it comes to waiting for players to realise that potential. On an international front, his inclusion in recent squads is an encouraging sign, however, he’ll need to play more and put in better performances if he’s to make the plane for EURO 2020. If he can rediscover his form from the second half of last season, Hudson-Odoi will be a dangerous weapon for both club and country, and could very well begin to realise his enormous potential in 2020.