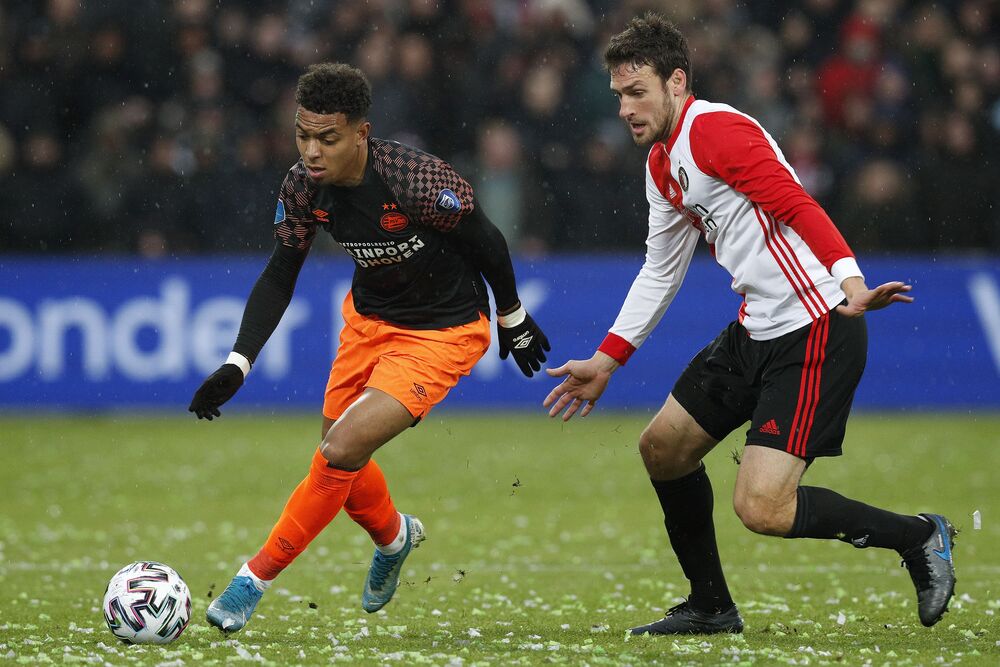 “At Ajax, we trained four times a week and played a game at the weekend,” Malen told Arsenal’s website. “I lived quite a distance away from where we trained, and so my mum used to drive the three-hour round trip five times a week, and I’m very grateful to her. She knew that I was focused on becoming a professional footballer and supported my dream as much as she could by making sure I got to training and matches.”

Thanks in part to his mother’s dedication, Donyell featured on the Dutch TV programme ‘Latjetrap’. The show included a challenge involving young footballers who were asked to hit the crossbar from different distances. Viewers at the time may not have realised, but they were staring at the future of the national team. Each Eredivisie club provided players, and Ajax’s just happened to hold three future stars in Matthijs De Ligt, Justin Kluivert, and Donyell Malen.

Although De Ligt and Kluivert made their name for Ajax’s senior side before moving on to Serie A, Malen took a different route to senior football. He first joined the Ajax academy in 2007 at the age of eight, but by sixteen he had agreed to a deal to join Arsenal — inspired by his idols Dennis Bergkamp and Thierry Henry.

“Dennis was my coach with Ajax when I was in the under-10s,” Malen told Arsenal’s website. “His time with Arsenal was before I was born and when I was very, very young, but I’ve taken time to watch a lot of his games with Arsenal. He’s a very quiet guy, but I learnt a lot from him, he taught me a lot about awareness, reading of the game and beating defenders.”

In doing so, he turned down approaches from both Chelsea and Manchester United, who admired his speed, direct running, and eye for goal. He was quick to show those exact traits for the Gunners’ academy, notching 27 goals in 67 appearances.

In Southampton, Donyell Malen's just done this for our under-18s 👏 pic.twitter.com/U05kVG1nCu

The summer of 2017 proved to be a pivotal moment for the striker. In July, Malen was called up to Arsenal’s pre-season tour. He made his senior debut for the Gunners in a 2–0 win over Sydney FC, and played again during a 3-0 loss to Chelsea in Shanghai. There was even a namecheck from Arsene Wenger.

Yet, surprisingly, on the last day of August, the striker completed a cut-price transfer to PSV Eindhoven. Like so many Dutch youngsters Malen began his time in the Eerste Divisie with Jong PSV and recorded 13 goals and 3 assists in 22 games. He also showed versatility by splitting his time between right-wing, left-wing, and centre forward.

“I started playing football when I was four years old for a small amateur club called Succes,” Malen said in 2015. “I played on the left-wing for three or four years, and when I joined Ajax as a nine-year-old, they moved me into the central striker role. I enjoyed the position a lot more but can still play wide or even as a number 10 if I am asked to.”

During his first year at PSV, he accrued just over 100 minutes in the Eredivisie, as the club sought to transition him into the first team slowly. By the end of his second year, however, he had racked up almost 1000 minutes in the top flight across 31 games and returned a respectable ten goals and five assists.

By now, Malen was beginning to deliver on the promise that first took him to North London, and it cast a light on just why he departed so quickly. Malen’s compatriot Andries Jonker, Louis Van Gaal’s former assistant, was in charge of the academy at the time and while speculation was rife it would appear their awkward relationship was at the heart of the matter.

“I heard him say that I came in too fat,” Malen recalled. “They had been working at Arsenal for two months when I came. Then, of course, you are not immediately at the same level. I was not fit yet, but too fat? No.”

During this period, Malen continued to represent his country at pretty much every level – from the Under-15s to the Under-19s – before deciding to leave the Emirates after just two years.

Donyell Malen is returning to the Netherlandshttps://t.co/j6bJTTtH8D

“That I was sent away from Arsenal is certainly not true,” he said in an interview with De Telegraaf. “I still had a contract for a year, and Arsenal even wanted to extend that. I don’t play football for the money. I never did that. Otherwise, I would not have left England.”

If Malen felt at all like he had a point to prove he took that energy into the current campaign. The 20-year-old had spent the previous season playing predominantly on the left-wing. At the start of the 2019-2020 season, he was moved into a forward role, which paid almost instant dividends when he notched a goal and an assist during his second start of the season against Ado Den Haag.

That would prove to be his warm-up act, however, with the main show coming in mid-September when he scored five against Vitesse Arnhem. The haul, which included two penalties, two headers, and a right-footed shot, gave a glimpse into not only his finishing but also his positioning and ability to sniff out an opportunity.

Donyell Malen is the first PSV player to score 5+ goals in a single Eredivisie game since Lambertus Theunissen in 1964.

“He possesses a lot of attributes that suit him well in both positions [winger and forward],” Michiel Jongsma, Dutch football expert, told Compare.bet news. “He is explosive and tremendously agile, far from small (179 cm) and a good, slick dribbler with a good eye for a pass. What stands out for me is his awareness: He reads situations tremendously well and his movement and anticipation are absolute standouts. Malen is very composed in the way he plays the game; he hardly ever looks panicked and has a very ‘designed’ way of going about things. His quickness of thought and overall reading of the game is what makes you think he can compete at any level.”

The fact he also has notorious power-broker Mino Raiola representing him should indicate the potential nestling inside of Malen.

“Gianluigi Donnarumma is in the national team at 17, so he will continue to get better with Italy and AC Milan, Moise Kean is doing well at Juventus, but the one who I am excited about is already with a Premier League club, and that is Donyell Malen at Arsenal.”

While his pace, dribbling, and finishing remain significant advantages, the youngster is not yet the finished article.

“There are things that he needs to improve on,” Jongsma added. “While his reading of the game is good, he is far from a focal point for his teammates yet, and when things don’t go his team or his way, Malen tends to get a bit lost. Also, while a composed finisher, Malen tends to lack a bit of power in his boots when it comes to shooting. Furthermore, the 21-year-old is quite one-footed and could do with learning how to use his body a bit better in duels.”

That said, the most pressing concern for Malen will be a return to fitness. The striker had notched 11 goals in 14 league games this season before being cruelly struck down with an injury against Feyenoord. The exact timetable for his return is unclear, but it looks like being months rather than weeks. It will place Holland in a conundrum of sorts this summer with Memphis Depay (a player Malen has been compared to) on a similar road to recovery ahead of the Euros.

Donyell Malen for PSV in 2019/20 for all competitions:

He refuses to stop scoring. 🔥 pic.twitter.com/2nAQLJ8d7q

What will no doubt aid the forward in his rehabilitation is his drive and determination, as well as the fact that at 21 years of age, the majority of his career lies ahead of him.

Barcelona, Arsenal, Liverpool are just some of Europe’s top clubs have already been credited with an interest in the player, but for now, like Malen, they must be patient. His return to senior football may be some time away, but when it does come, it would be nice to see him reunited on the biggest stage with his childhood friends, from boys to men, shining for both club and country.