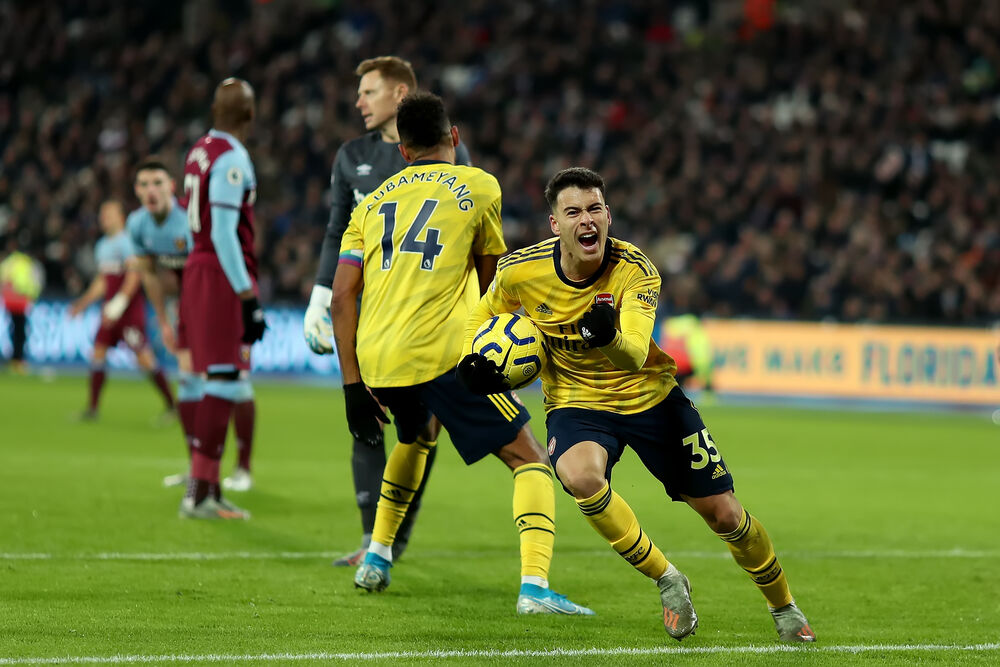 In life, there are few certainties, but for Gabriel Martinelli, there was one he trusted.

“I guess the most important thing is that I’ve always known I would be a footballer,” he told Arsenal’s official website.

Martinelli’s determination and perseverance are admirable, but it wasn’t just that which helped propel to senior football. His first goals for Arsenal, in the League Cup against Nottingham Forest, might have felt like the emergence of an overnight success, but it was the by-product of several years work in his native Brazil.

What a moment for Gabriel Martinelli! 🤩

“When he arrived here, we were told that he was ‘the boy with the project,’” Luiz Antonio, Martinelli’s coach with Ituano at under-15, under-17 and under-20 level, told the Athletic.

By 14, Martinelli already had an entourage consisting of his father João and two agents. Like many Brazilian youngsters, his first exposure to the game came via futsal. His ability there caught the eye of Corinthians, at which point he switched to traditional football aged 10.

The lure of a big club like Corinthians is obvious. They often boast better coaching, better infrastructure, and in time, a bigger platform for those with talent. Yet, when his father João moved to the quiet town of Itu —north-west of Sao Paulo— he made the rather bold decision that Gabriel would play for the local team, Ituano FC, rather than make the over 250-kilometre round-trip to play for Corinthians.

After a short trial, he joined Ituano’s academy in 2015, and the next step of the process could begin in earnest. It was around that same time that Martinelli first considered football as a potential career.

“Back then, I was just enjoying myself, and people would invite me to play,” he told Arsenal’s website. I would go and play football with them but only for fun. I think I was 12 or 13 years old when I saw that football could give me a better future and I could make a career.”

For a time it seemed like Martinelli’s spell with Ituano would be brief. He received an invitation to train with Manchester United on four separate occasions between 2015 and 2017, with a photo of him in United training gear before a youth team game recently resurfacing on Twitter.

“There was a project between Ituano and Manchester United, and they always took a player. And I always came for these trips,” he told DAZN.

A concrete offer from Old Trafford never arrived, but Martinelli was undeterred. It is that attitude, matched by a soaring ambition, that has won Martinelli so many admirers.

“Professionalism and maturity are clearly great assets for any young player, but it’s the context that is unique in Martinelli’s case,” The Athletic’s Jack Lang told Compare.bet news. “This wasn’t a kid at a top Brazilian club; Ituano play in the fourth division. It’s a well-run club, but there are no bells and whistles. For Martinelli to take his own development so seriously in those surroundings, and at such a tender age, speaks volumes about his ambition.”

He signed his first professional contract in November 2017 and less than six months later he was making his first-team debut for Ituano in March 2018. He drifted between the first team and the youth team, and after some stellar showings for the club’s U20 side had managed to establish himself in the first time by the start of 2019.

“I remember his first start in the Sao Paulo state championship, against Sao Bento,” Vinicius Bergantin, Martinelli’s coach at Ituano, told the Athletic. “Before the game, he told one of the coaches that he would score with his very first touch. That didn’t happen, but he was decisive. He got a Sao Bento player sent off with his dribbling ability, then set up a goal, and then scored with the last kick of the match. It showed me that he wasn’t just talk. It was his very first start, and he didn’t feel the pressure at all.”

It wasn’t just with the ball that Martinelli proved dangerous. His dedication off the pitch —he goes to bed early, doesn’t go out, doesn’t drink, and considers ice cream his weakness— was matched with selfless running to pressure defenders and create passing options for teammates. While at Ituano, Martinelli also worked under one of the Premier League’s most memorable Brazilian’s – Juninho.

💬 "He turns up early every day. He does all the stuff and everything anyone asks him to do. He is the first player to press and the last player to leave everything on the pitch."

When it comes to adapting to the English culture, few are better placed than the man that pitched up in Middlesbrough in 1995.

“It doesn’t take long to notice a player of his calibre,” Juninho told Bleacher Report. “He has a big character, always tries to play the same way, whether it’s against great teams or smaller ones. I’ve told him to carry on and maintain his playing style—driving the ball forward quickly and skillfully and finishing his plays accurately.”

Stylistic comparisons between the pair would be naive, however, with Martinelli closer to Roberto Firmino in terms of his versatility and Richarlison for his direct, aggressive running. Interest in Martinelli ramped up after his performances helped Ituano to the quarter-finals of the Sao Paulo State Championship, with an impressive record of six goals and three assists in 14 appearances.

That form earned him the best newcomer award and also a spot in the team of the tournament, as well as invite to a training camp with the senior Brazil squad.

There was talk of a deal with PSV Eindhoven being close, but in the end, amid interest from dozens of clubs, Arsenal won out when they agreed to sign the player in July last year.

“I remember we played against Guarani, we won 2-1, and my agent called me,” Martinelli told DAZN. “He said ‘you have to decide, so what?’. Then he said it was Arsenal. Then you think, one of the best clubs in Europe. I said yes, I couldn’t refuse. There were some approaches, but Arsenal came in strong, and I made the right choice to be here.”

He was quickly thrown into the first team during pre-season and notched a goal in his first game against the Colorado Rapids.

“Who needs Zaha and Malcom when they’ve got Saka and Martinelli?” One buoyant Arsenal fan tweeted.

His first competitive goal for the club came against Nottingham Forest in the EFL Cup. What stood out from Martinelli’s early matches was the teenager’s confidence. Blessed with pace and tricks, he showed little fear when attacking opposition defenders. As with many young players, his decision making will require refinement, but this will most likely arrive in time.

October would see Martinelli add further goals in the Europa League before another brace in the League Cup against Liverpool saw him equal Ian Wright’s record of scoring on each of his first four starts for Arsenal.

Gabriel Martinelli is the first teenager to score 10+ goals across all competitions for Arsenal in a single season since Nicolas Anelka in 1998/99.

As omens go, matching a scoring record held by Ian Wright is not a bad one, and Martinelli certainly has the same passion for goals. The 18-year-old grew up idolising Cristiano Ronaldo, and he shares that same level of ambition.

“He was very ambitious and showed that element of his personality in so many ways. He likes to push himself to the maximum, straining for excellence at all times. He would be annoyed to lose a training game, for example,” Luiz Antonio told the Athletic.

All in all, it means 2020 could be a big year for the teenager. Arsenal are a team in transition under Mikel Arteta, and that could place the Brazilian as a key component of that rebuild. The hope will be that not only can Martinelli deliver on his undoubted potential, but also that Arsenal can match his ambition.

The teenager felt sure of a career in football long before he received it and betting against him again is a bad idea if his current success is anything to go by.