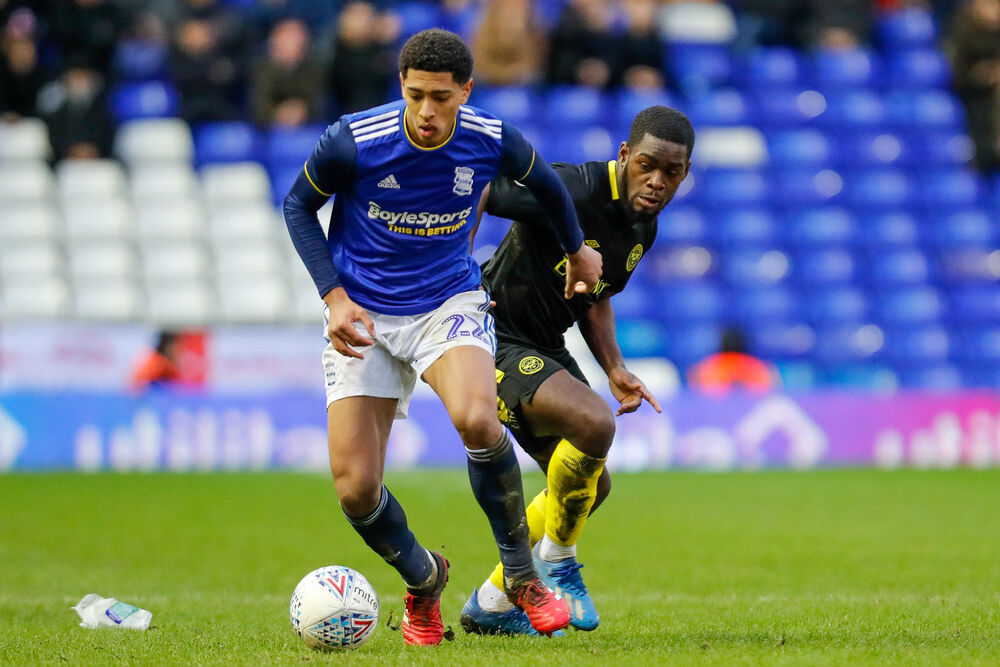 Jude Bellingham’s stomach was a washing machine full of emotions.

He was about to make his first-team debut for Birmingham City at 16-years and 38 days old, breaking a record held by European Cup winner Trevor Francis.

“To beat that record is a huge honour,” Bellingham told the club’s official YouTube channel. “We found out the team for the shape on the Monday, the starting XI, the roles at set-pieces. To be honest, I tried not to think about it, but I couldn’t help myself. Not being nervous, just excited, just making sure all the basics, the fundamentals were on point.

“Where I was for set pieces, my role when we get the ball, out of possession, just trying to nail that in my head so I could do it out on the pitch. When we got there on the day, my stomach was really full of butterflies.”

Bellingham saw his first test early in the game when a high, looping ball from goalkeeper David Stockdale made its way towards him. The teenager — who is younger than the first iPod and wasn’t even born when James Milner made his debut for Leeds United — met it with a composed first touch, and with that, any tension dissolved.

“You’ve dealt with these at many age groups try to treat it with any other game,” Bellingham said when asked how he felt when he saw the ball coming.

Such composure on the ball has defined the early throes of Bellingham’s professional career. The teenager already has a footballer in the family with his father, Mark, a once prolific striker in non-league, where it is claimed he netted over 700 goals in 850 games.

As Jude Bellingham’s all over @TheSunFootball pages today – looks like we’ve come full circle nearly 50 years on. This was The Sun spring ‘71 after #bcfc had another ground breaking 16 year old 💙 pic.twitter.com/exjy5cTPhf

“My mum, dad, brother, grandparents — they are the reason I’m here today, because of all the sacrifices they have made,” he said. “Things like providing transport for training, supporting me when school’s been hard. “It’s happened quickly, but I’ve felt I was ready, and I’m grateful to the manager who’s given me the opportunity. I’m eager to do more now.”

While school may have been hard, life on the pitch has come easy for Bellingham. In August last year, he became Birmingham City’s youngest ever first-team player when he started the EFL Cup game against Portsmouth. He made his first appearance in the Championship during a 3-0 defeat to Swansea later that month and built on that with a cameo at home to Stoke City.

The game against the Potters would serve as a launchpad for Bellingham. With his side drawing 1-1, the youngster drove forward before trying a pop-shot from distance. The ball took a deflection and found its way into the back of the net.

“It was a dream come true. It’s what I’ve dreamt of since I was seven years old, as soon as I joined the academy,” he said of his goal against Stoke. “A goal in front of the Tilton End, then into the crowd and that’s exactly what happened! As soon as that ball hit the net, I was off to celebrate with my people! Lukas [Jutkiewicz] had to save me from getting a booking, but I’m a fan as well, so me being in there felt like celebrating as a boy. Scoring here made it even more special.”

If Bellingham enjoyed his first senior goal for the club, he would not have to wait long for his second. The teenager had earned the trust of manager Pep Clotet and started the next game away to Charlton Athletic, where he scored the only goal of the game.

Clotet opted to utilise Bellingham on the left-wing at the Valley that day, and while he is a box-to-box midfielder by trade, he has played across midfield this season for the Blues with the Spaniard often preferring a traditional 4-4-2 formation.

'If I put Jude in a line-up, from the team sheet the opposition coach will not have an idea where he is going to play' #bcfc #KRO https://t.co/aa6vcwUJF1

Blessed with versatility, technical brilliance, driving runs, and defensive contribution, one of Bellingham’s less-heralded traits is his a maturity. The teenager captained the England under-17 side during the Syrenka Cup last year. England emerged victorious from the tournament, and he collected the Player of the Tournament award, with his leadership skills a less discussed facet of his well-rounded game.

Bellingham is one of only a handful 16-year-olds playing regularly in the Football League, and as such has drawn considerable interest already. Barcelona and Ajax have made enquiries, while Manchester United sent Mike Phelan to watch him and Chelsea have also been strongly linked recently.

“We are aware he is being watched,” Clotet told the Birmingham Mail. “From the beginning, he has been watched since he was 13 or 14. For the Middlesbrough game, half of Europe was here. He is used to it, and I am used to it. I have always said it is very good that clubs show interest in our players because this means that we have good players.”

A lifelong Birmingham City fan, Bellingham appears in no rush to decide his future. The midfielder has already enjoyed over 1600 minutes in the Championship this season, with Birmingham carefully managing his exposure to the first-team.

The club, including academy manager Kristjaan Speakman, have taken a thorough approach to his development. Alongside introducing him to the U23s at 15-years-old, they have managed his academic education. They have not sought to overwhelm him and gradually added the responsibilities that come with being in the first team, such as conducting interviews with the club’s media team. His connection to the area, through local charities, has helped keep him grounded, and in turn, strengthened his desire to stay.

“His team have handled his development well so far,” Connor Rowden, a youth football expert, told Compare.bet news. “They’ve put their trust in the plan Birmingham set out for them, and Birmingham have held up their side of the bargain. As for his next move, there’s no perfect formula, but I think he’s best staying off where he is or joining a top side, rather than considering a middle step.

“At just 16, time is on his side, and the only danger of staying put for now is the risk of being overplayed. Which is something that Birmingham should also be applauded for managing smartly. He’s played a lot of football, but has rarely played back to back games and has also been withdrawn from International commitments for his own good.”

Certainly, Clotet feels confident that he can convince Bellingham to commit his future to the club.“At the end of the day, I do have the feeling that Jude will stay,” he said. “He is very happy here he knows it’s one of the right steps for his progression. He has played more than 20 games for us, and that has a value.”

That said, the summer will be another test of both Birmingham and Bellingham’s resolve. Currently, he is still on a scholar’s wages of £145 per week, with his 17th birthday the earliest point at which he can turn professional.

Until then, he can keep enjoying the butterflies and playing for the club he loves. After all, this is a child living out his dream before he has even become an adult, and as football fans, that is something we can all appreciate.

“I think Jude is very happy with what he’s doing, we are very happy with him, he’s growing, and I see him very focused on us,” Clotet said. “It’s his club, his people he is living a dream that comes from the work that he and a lot of people in the academy put together to reach this level. He understands that.”