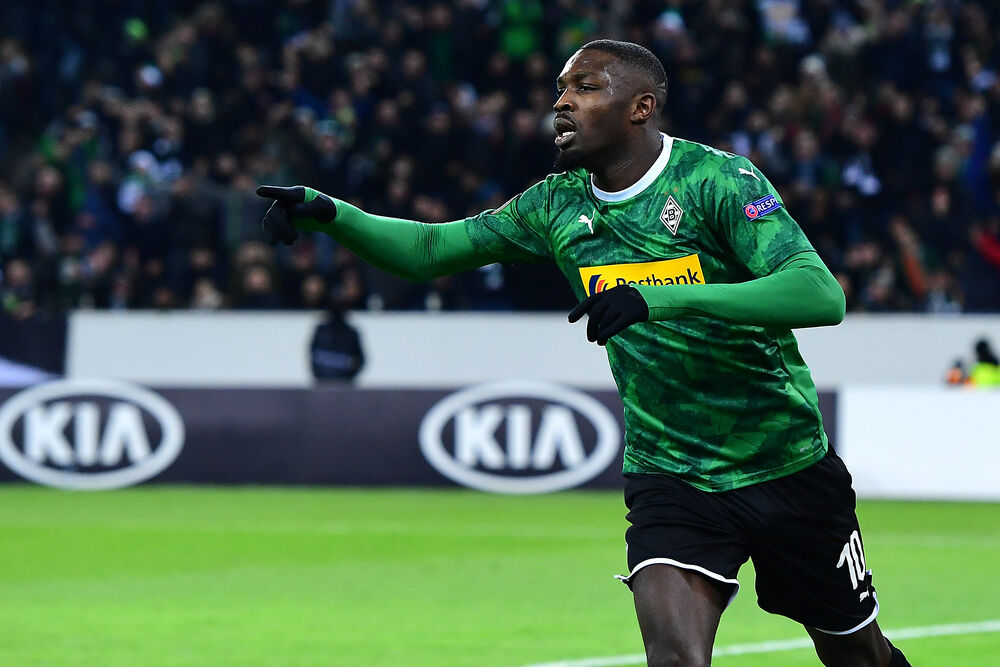 Marcus Thuram, son of legendary French defender Lilian, is an altogether different type of player to his father.

A powerful forward with en eye for goal, Thuram’s professional football career began in 2014, when he made his Ligue 2 debut with Sochaux at the tender age of 17. His first foray into first division football came when Ligue 1 side Guingamp purchased him in the summer of 2017 for an undisclosed fee. The youngster quickly established himself as an important member of the team, netting against Lyon on just his second league start. In total, Thuram made 32 appearances and scored three goals that season as Guingamp achieved a respectable 12th-placed finish.

The forward’s famous family name immediately put him under the spotlight, his father Lilian being France’s record appearance maker and a World Cup winner who played for the likes of Juventus and Barcelona. However, while his father was an uncompromising defender, Marcus Thuram is an explosive forward. Standing at 6 ft 4, he actually stands three inches taller than his father, but rather than using his height and athleticism to keep out goals, Marcus is all about scoring them.

This became apparent in Thuram’s second season in Ligue 1, as he impressed by netting nine league goals—the most at his club—despite Guingamp finishing bottom of the table. Far from being just a goalscorer, however, Thuram also established himself as an excellent dribble and all round creative outlet.

Marcus Thuram: Has completed more dribbles (84) than any other player aged 21 and under in Europe's top five leagues this season

Thuram proved a shining light in an otherwise miserable campaign for the French side, and he also came close to leading Guingamp to cup success, the team making the final of the Coupe de la Ligue only to lose on penalties to Strasbourg. The cup run produced one of the most memorable moments in Thuram’s young career as his side faced PSG in the quarter-finals.

Having missed a penalty shortly before PSG took a 1-0 lead, Thuram proved his mettle and once again stepped up to the spot when Guingamp were awarded another spot-kick in stoppage time. Unfazed by his earlier miss, Thuram confidently sent Alphonse Areola the wrong way and handed PSG their first defeat in the competition for more than six years.

93' Marcus Thuram converts from the spot to give Guingamp a 2-1 lead in injury time. #PSGEAG

However, while that penalty was the highpoint of Thuram’s young career, another spot-kick a few months later put him at his lowest. The pivotal moment came on 12 May when Guingamp visited Rennes, needing a win to stay up. Trailing 1-0 for most the match, Guingamp equalised in the 87th minute before winning a crucial penalty in stoppage time. Thuram stepped up, only to hit a weak penalty down the middle that was saved by the keeper, missing the chance to keep Guingamp in the top flight.

While he may not have been enough to keep his side up, his impressive form throughout the season was another to secure Thuram a move that summer. Bundesliga club Borussia Monchengladbach signed him for €12m from the relegated French side on 22 July 2019, the Frenchman agreeing a four-year deal.

Borussia Monchengladbach have announced the signing of Marcus Thuram, son of Lilian. 🤝

Here's what the striker can do! 🔥pic.twitter.com/dODjJPo1lj

Thuram had big boots to fill, signed as a replacement for Thorgan Hazard following his move to Borussia Dortmund and taking the number 10 shirt in the process. He immediately showed that he was ready to handle the responsibility, scoring the only goal in a 1-0 win over SV Sandhausen in the DFB-Pokal on his debut. Safe to say that was only a hint of what was to come for Thuram at Gladbach.

The forward has enjoyed a stunning first six months in Germany, playing a major part in his side’s unlikely push for the Bundesliga title. Playing either as a second striker in a 4-3-1-2 formation or as a wide forward in a 4-2-3-1 or 4-3-3, Thuram has proved himself to be a positionally and tactically flexible forward and has formed a good understanding with compatriot Alassane Plea and fellow young forward Breel Embolo.

Playing under Marco Rose, also in his first season with the Foals, Thuram has flourished in the attacking, high-intensity system employed by his manager. His excellent movement has helped him excel as part of a fluid forward line, drifting between central and wide positions, while he’s also proved himself adept at pressuring and regaining position high up the field, a crucial aspect of Rose’s high-pressure counter-press strategy.

With six goals and five assists in 18 appearances, Thuram is Gladbach’s joint top scorer alongside Embolo and has quickly established himself as one of the Bundesliga’s most exciting young talents, picking up the Rookie of the Month award for September and October. In total, he has an impressive ten goals from 25 appearances this season.

Will he get back on the scoresheet tonight? #S04BMG pic.twitter.com/ctWT5tH5Mq

Despite standing at 6 ft 4, Thuram has plenty of pace and is a surprisingly strong dribbler, excelling at carrying the ball forward and averaging 2.5 successful dribbles per 90 minutes. A natural goal scorer who is also good in the air, this combination of power, pace, skill and clinical finishing has caused plenty of trouble for Bundesliga defenders.

Thuram has also proved his creative instincts. In fact, when asked to sum up his own main strengths, Thuram emphasised his creative qualities rather than his goalscoring: “having the ball at my feet, trying to go past defenders dribbling, creating chances for myself or teammates. I have a lot to offer the team in attack.”

As well as drawing plaudits for his goal scoring ability, Thuram has also gained plenty of fans thanks to his unique celebration. The forward’s signature move is running to the corner flag, placing his shirt—or a teammate’s—over it, and proceeding to remove it and carry it around the pitch. It’s predictably put him in the bad books of referees, but it’s certainly helped make him a favourite of the Gladbach faithful.

According to those who work with Thuram, that exuberant side of his personality has been just as important as his on-pitch ability to his brilliant start to life in Germany. Take the words of Max Eberl, Gladbach sporting director: “With him, we have really improved in terms of physicality, speed, dribbling and scoring goals. Right from the beginning he has been an incredibly funny and open kind of guy who spreads a lot of fun and joy in the dressing room, but who is also very professional. This combination is what makes him special.”

Those sentiments have been echoed by Thuram’s teammate Breel Embolo, who said: “Marcus is a great guy […] He’s a very grounded person and a little crazy, too. He always has a smile on his face, even when he didn’t have the easiest of starts because he had such a short pre-season.”

“It speaks for him that he’s been able to make such a big impact. He always has crazy ideas on the pitch, and I think this is one of his biggest strengths. He’s unpredictable and I’m happy to be able to play on the same side as him. Everyone only has positive things to say about him and I’m happy that we have a player like him in our ranks.”

On an international level, Thuram has enjoyed success at youth level winning the 2016 Under-19 European Championship and playing for at the Under-21 Euros. While he is yet to make his senior debut for France, it seems to be only a matter of time if he can keep up his current form.

Thuram’s start at Gladbach has certainly attracted the attention of France manager Didier Deschamps, himself a former teammate of Thuram’s father Lilian. “He is developing well, his club is at the top in Germany,” Deschamps said in a press conference. “He plays in various positions, often as the second centre forward. He’s definitely one of the players we’re following.”

The France team is packed with talented forwards, but Thuram’s combination of height, power, pace and skill means he offers something different to the other options available to Deschamps. This summer’s European Championships may come too soon, but there’s no doubt he has the ability to be a major player for France going forward.

Borussia Monchengladbach currently sit fourth in the Bundesliga, just a point behind RB Leipzig in third and two above Bayer Leverkusen in fifth. Whether the club can keep up its unlikely Champions League charge for the duration of the season remains to be seen, but in Thuram they have a player capable of hurting any team.

Thuram has already been linked with a move to Borussia Dortmund, although he has reaffirmed his commitment to Gladbach. However, if he keeps up his current upward trajectory, the big clubs will come knocking. For now, though, it will be fascinating to see whether Thuram can continue to lead Gladbach’s charge towards Champions League football and break into the France team in 2020.