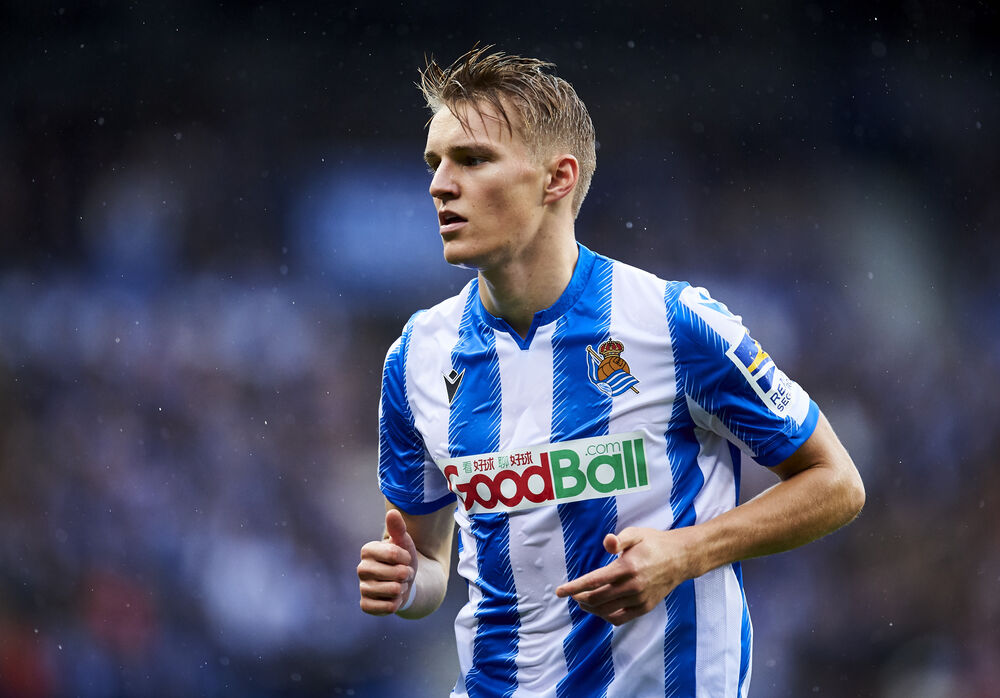 Twitter was buzzing. The focus of attention was on Barcelona’s trip to San Sebastian to face Real Sociedad. You can often predict who will steal the show when Barcelona take to the pitch but this was different. Those watching weren’t discussing the visitors, but rather the hosts, and in particular Martin Ødegaard.

This was certainly not the first time the internet had focused its gaze on Ødegaard. He entered football’s consciousness at fifteen when, in 2014, he made his professional debut for Norwegian side Stromsgodset.

Ødegaard almost marked his first foray into professional football with a goal, beating a handful of defenders before passing to team-mate Thomas Sorum to score. Sorum joked afterwards: “He loses three or four guys and I get to score. That’s a good deal!”

Some of Europe’s elite were already familiar with Ødegaard. He had taken in training spells at Bayern Munich and Manchester United. While many close to Ødegaard were submerged in the hysteria surrounding him, the teenager remained calm.

“If you get carried away now, you won’t get far in 10 years,” Ødegaard told reporters after being called up to the Norwegian senior national team in 2014, aged 15. “I’m supposed to be my best then, not now. That I know.”

It was a surprising admission, and while it may have felt like lip-service at the time, it has proven an astute observation.

“His maturity off the field showed he wasn’t the average 15 or 16-year-old,” Jeb Brovsky, a teammate at Stromsgodset, said. “It was the essence he brought onto the field. He is a very quiet kid, but his soccer brain is far beyond his years. The calmness he has in his game, the vision, it is something you rarely see in someone that young.”

The decision process Ødegaard and his family (including his father, a former professional, Hans-Erik Ødegaard) undertook was played out in public. There was talk of Ajax, Liverpool, Man United, and Bayern Munich among others. Think of an elite European club and chances are they were credited with an interest in Ødegaard.

Eventually, after much speculation, the teenager opted to join Real Madrid in January 2015.

Odegaard: “It's a dream come true to be at the biggest club in the world" http://t.co/GNjJDiEz3C #HalaMadrid pic.twitter.com/cgYN6ewG33

“I was a bit surprised that he went to Real Madrid, but you never know what the whole plan is for him,” Klaus Pettersen, a mental coach who worked with Ødegaard at Strømsgodset told Goal. “I believe they have good control over the situation. In my opinion, I think Ajax would have been a very good club for him.”

Initially sent to play with Real Madrid Castilla, the club’s second team then coached by Zinedine Zidane, he split his time between the club’s first and second team. Ødegaard remained eager to learn from the likes of Cristiano Ronaldo, Gareth Bale and James Rodriguez, but it was his time with Castilla that left a greater, more polarising, legacy.

Ødegaard produced a respectable seven assists in 34 games, but press reports painted him as a complicated character that struggled to bond with his teammates and showed indifference towards training with the reserves.

“Fifty-eight per cent of the available points taken before the 16-year-old arrived and thirty-seven per cent after,” wrote AS. With Castilla ultimately missing out on a play-off position, critics cited Ødegaard as part of the problem with reports claiming he did not see eye to eye with his team-mates.

The situation was compounded by the fact that Carlo Ancelotti, speaking in his 2016 book, Quiet Leadership: Winning Hearts, Minds, and Matches, said the transfer was a ‘public relations exercise’ by Perez.

“He could be the best player in the world, but I don’t care because he was not a player who I asked for,” Ancelotti wrote.

During Ødegaard’s first two and a half seasons at the club, he played just once in La Liga. Even if untrue, the narrative forming around him was one of a failed wonderkid, a player that made a mistake in joining Real Madrid. For those that knew the teenager, these setbacks were not a major concern.

“He has a mindset of development, but he also has a passion for the results that he produces and the team,” Pettersen said. “His ability to handle setbacks is great. Where other players need a whole week or a new match to improve their self-esteem, he has an ability to recover mentally very quickly. The defeats are out of his head after a couple of hours because he knows that a low mindset will hinder his development. He is not easily distracted by fame and other outside forces. He is simply driven by the game itself.”

In January 2017, a little under two years after he joined the club, Ødegaard moved to Heerenveen on an 18-month loan. There would be flashes of quality from the Norwegian, a reminder of why Real Madrid had fought so hard to sign him, but his progress was ultimately derailed by two separate foot injuries. Despite this, De Superfriezen were keen to extend his stay but the teenager opted to join Vitesse instead.

Martin Ødegaard for Vitesse in the 2018-19 Eredivisie:

It was there that things kicked into high gear. Operating primarily on the right as a wide playmaker that cut in on his left, Ødegaard recorded 11 goals and 12 assists in 39 games. Watching the 20-year-old last season, his quality was clear to see. Ødegaard is comfortable in tight spaces and has an eye for a pass, working well as an outlet for Vitesse when in transition from defence to attack.

It is no surprise that only Hakim Ziyech averaged more key passes per game in the league last season, as per whoscored.com. To his credit, Ødegaard did enjoy a better pass completion than Ziyech. By the end of the campaign, Leonid Slutsky’s side finished fifth in the Eredivisie, and no Vitesse player had provided more assists, completed more take-ons, or created more chances than Ødegaard. He also posted some of the best defensive pressure numbers in the Eredivisie.

Slutsky told DAZN: “I don’t know exactly what kind of club would be good for Martin, but he’s 100% ready for another level.”

Ødegaard’s ‘level’ this season is Real Sociedad. The 21-year-old has four goals and five assists in 16 games, but he has largely caught the eye with his passing and creativity. Ødegaard currently leads La Liga in key passes per game, and is fourth in terms of dribbles. His speed of thought and ability in tight spaces is often what sets him apart, as well as vision and spatial awareness.

Since the start of the 2016/17 season, no player has created more chances in a single LaLiga game than Martin Ødegaard’s 10 vs. Alavés.

The player is not the finished article, of course, and when playing out wide he has been known to struggle with tracking runners. It may sound harsh to evaluate an attacking midfielder on his defensive qualities, but if Ødegaard is to persist out wide he will need to improve these elements of his game.

Matt Wiltse of Managing Madrid delved further into the flaws in Ødegaard’s game: “It’s hard to criticize such an aesthetically pleasing player who does little wrong over a 90-minute match, but one area of improvement from the Norwegian would be his patience. When Ødegaard picks up the ball between the lines, has the space to turn, and can drive at a retreating backline — he is so, so dangerous. That‘s when he’s at his best. Though at certain moments in a match, he can be overeager to get on the ball and make an impact. If his teammates are not finding him, he will drop deeper and deeper to pick up the ball from his centre backs. In those situations, he is better off being tactically disciplined and patient, lurking between the lines and waiting for his teammates to find him in more goal-threatening advanced positions.”

That said, it seems inevitable that Ødegaard will return to Real Madrid. To his critics, this seemed an impossible outcome as recently as 2017, but as the player himself has been keen to stress, patience is key. While the excitement surrounding Ødegaard has peaked and dipped, he has remained focused and hard-working. Now he is reaping the benefits of that consistency, and in turn, giving Real Madrid the great attacking talent they thought they had purchased in 2015.