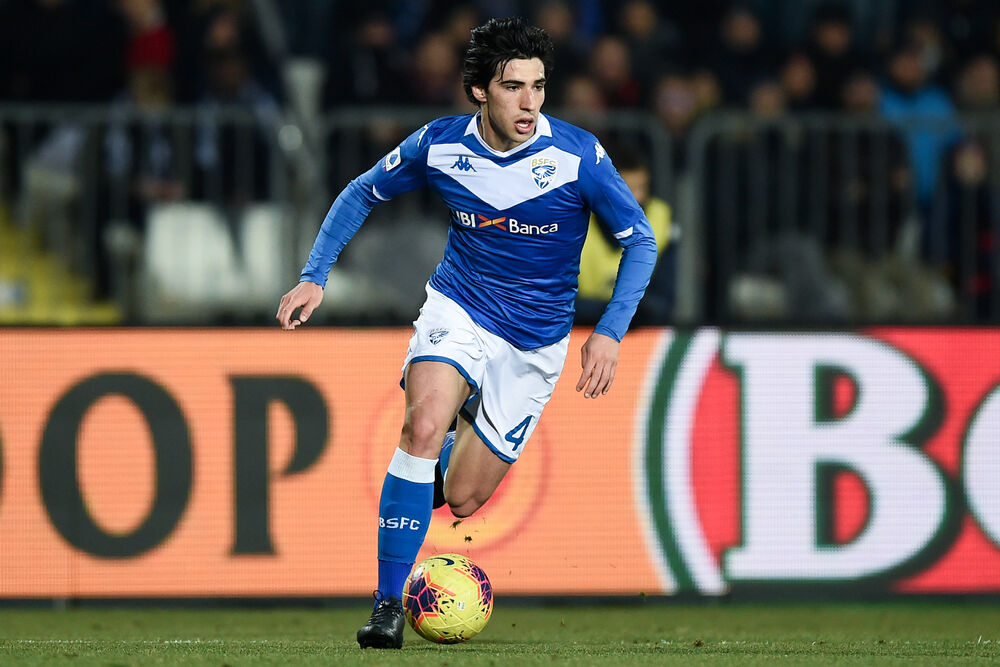 As a long-haired midfielder playing for Brescia Sandro Tonali could not escape the comparisons to Andrea Pirlo.

“There are similarities with Pirlo in a way, but I also add a lot of grit in there, so maybe more Gattuso,” the Italian said after his debut for the national team.

If it is true that Tonali is the heir to Pirlo’s throne, then someone should perhaps have informed Milan.

“AC Milan rejected me after a trial,” Tonali said in an interview with Corriere dello Sport. “I was eight, and I was playing in attack. Disappointment? No, because then I went to Piacenza.”

Tonali is right to reject the notion of it being a disappointment. A closed door in Milan opened up an opportunity 90 minutes south in Piacenza. Tonali spent three years with the club before they filed for bankruptcy.

The Biancorossi’s financial situation allowed Brescia to recruit Tonali in 2012, and it was there that the teenager’s future in central midfield began to take shape. Before that, he had been playing as a second striker, but coaches moved him to play as a deep-lying playmaker, commonly referred to as a ‘regista’, which translates as ‘movie director’.

Pirlo had undergone a similar transition during his second spell with the Rondinelle. The player widely regarded as one of the greatest deep-lying playmakers of all time had first shone further up the field for Brescia before securing a move to Internazionale in 1998. He was sent back on loan to Brescia during the second half of the 2000/2001 season, where Carlo Mazzone moved him into a deeper midfield role to allow both him and Roberto Baggio to play alongside one another.

Is Sandro Tonali the heir apparent of Andrea Pirlo?

Much like Pirlo, Tonali thrived in his new role, netting 11 in 24 outings at under-17 level in 2016/17. That form earned him an opportunity with the first team and he was called to make his senior debut as a 17-year-old on the opening day of the 2017/18 Serie B season, stepping off the bench for the final 20 minutes against Avellino.

He would have to wait just shy of five months for his next outing —a 2-0 defeat to Palermo— but by the end of the season, he had made 19 appearances, notching two goals and two assists.

The 2018/2019 season was undoubtedly Tonali’s breakout year. It began in the summer when he helped lead his country to the final of the European Under-19 Championship in Finland alongside Moise Kean and Nicola Zaniolo. Despite being named in the team of the tournament, there was heartbreak in the final for Tonali as Portugal ran out winners. At club level, there was no such disappointment. Tonali accrued just under 3,000 minutes in Serie B as Brescia pipped Lecce to the top spot by a single point. He registered three goals and seven assists during his 34 appearances, operating primarily as a defensive midfielder.

His career was further boosted in November 2018 when Roberto Mancini sought to call Tonali up to the Italy squad for their friendly against the USA.

Sandro Tonali is the first player from a Serie B club to be included in a senior Italy squad since Angelo Ogbonna in 2011.

“I want to stress again that he’s incredibly gifted and has clear margins for growth,” Mancini said at the time. “I’ll get to know him better over the next few days.”

Tonali was to replace the injured Marco Verratti. Like Tonali, Verratti made a name for himself in Serie B, with Pescara, winning promotion in his final season at the club. Verratti left the Delfino for Paris before he could sample Serie A, which is where Tonali now finds himself.

Mancini has given Italy a very solid midfield with Verratti, Jorginho and Barella but feels like a given Tonali will be the leader of that unit by next World Cup

Understandably, as a newly promoted club, Brescia have found life in the top flight difficult. There was, however, a sense of optimism heading into the season after they signed free agent Mario Balotelli. The former Liverpool and Manchester City forward has managed five goals in 15 league games, while wrestling with racist abuse from the stands.

Underpinning the team’s struggle on the field has been inconsistency from the top. Former Leeds United owner Massimo Cellino decided to replace manager Eugenio Corini with former World Cup winner Fabio Grosso in November. The oft eccentric Cellino then reversed his decision under a month later when he reappointed Corini in early December.

Paddy Kenny ditched by Leeds because owner Massimo Cellino does not like his May 17th birthday http://t.co/K3fl8A2pDM

“I love president Cellino very much, and he rates me highly. He’s a great person, and I hope to travel down a good road with him,” Tonali said. “After the match against Fiorentina, he said he wouldn’t even sell me for €300 million, but that doesn’t scare me, even if it really is a lot of money.

Tonali has impressed in his debut Serie A season. So far, he’s produced one goal and four assists during his first 20 games in Serie A. He completes 2.2 key passes per game, ranking 9th among all midfielders in Serie A, per WhoScored.com.  As expected, his performances have attracted the interest of Europe’s elite, all of who are ready to pounce.

“Sandro has extraordinary margins to grow into,” Corini said following Brescia’s win over Udinese earlier this season. “The balance with which he deals with things and how he experienced the changes of recent months is incredible. He has something different; we just have to accompany him towards a great career.”

Zach Lowy, founder of Breaking the Lines, shares those sentiments.

“Tonali is really talented at launching counter-attacks,” Lowy told Compare.bet news. “He can break the lines with ease and take out a line of defenders with an inch-perfect long ball. He can evade pressure, but he can also cut out passes with his reading of the game.”

What is also becoming more evident as Tonali emerges into the Italian top flight is that comparisons with Pirlo, while poetic, are misleading.

“He will be the next De Rossi”, Corini told La Gazzetta dello Sport. “He doesn’t look like an 18-year-old player. He faces every struggle with a big personality; he only needs to continue to work hard”.

When asked, the player himself was somewhat coy on the matter.

“It’s tough to pick one of those champions [Daniele De Rossi, Gennaro Gattuso and Andrea Pirlo],” Tonali said in October “Maybe a mix of all of them would be perfect!”

Tonali was speaking after his senior national team debut against Lichtenstein, a game which Italy won 5-0.

“I felt wonderful, [making my debut] as not everyone gets to play for the Nazionale,” he said. “After 30 seconds where I was a little emotional that it was really happening, I settled down,” the Brescia midfielder told Rai Sport. “The coach told us all to be ready to play, so I had an idea. Everyone in the squad was very helpful to the newcomers like me, and it felt easy to come in. I don’t know how much I’ll play, we’ll take it game by game, and you can never tell in football what will happen.”

Despite the plaudits and success, Tonali is not yet the finished article. His decision making, in terms of when to release those line splitting passes, still needs work, as does his marking, as noted by football analyst Cheuk Hei Ho.

“Brescia’s defensive scheme requires the wide central midfielder to move out of the position to engage the ball handler,” Ho wrote. “Tonali often hesitates to move out of the area in front of the centre back, making it difficult for his team to control the resultant space.

“Tonali is certainly talented, but no big club is going to start a central midfielder just for making transitional plays. It’s not his fault that Brescia’s system has limited what he can do, but he is also extremely raw. It will take quite some time for him to hone his game.”

Thankfully, Tonali has time on his side. If the teenager can continue to grow and flesh out his game, then he will no doubt reach the stage that so many are predicting for him, starting with a big year in 2020.

Until then, he can provide a concrete answer to football’s most tedious question — is Sandro Tonali the new Andrea Pirlo? No, he’s Sandro Tonali.