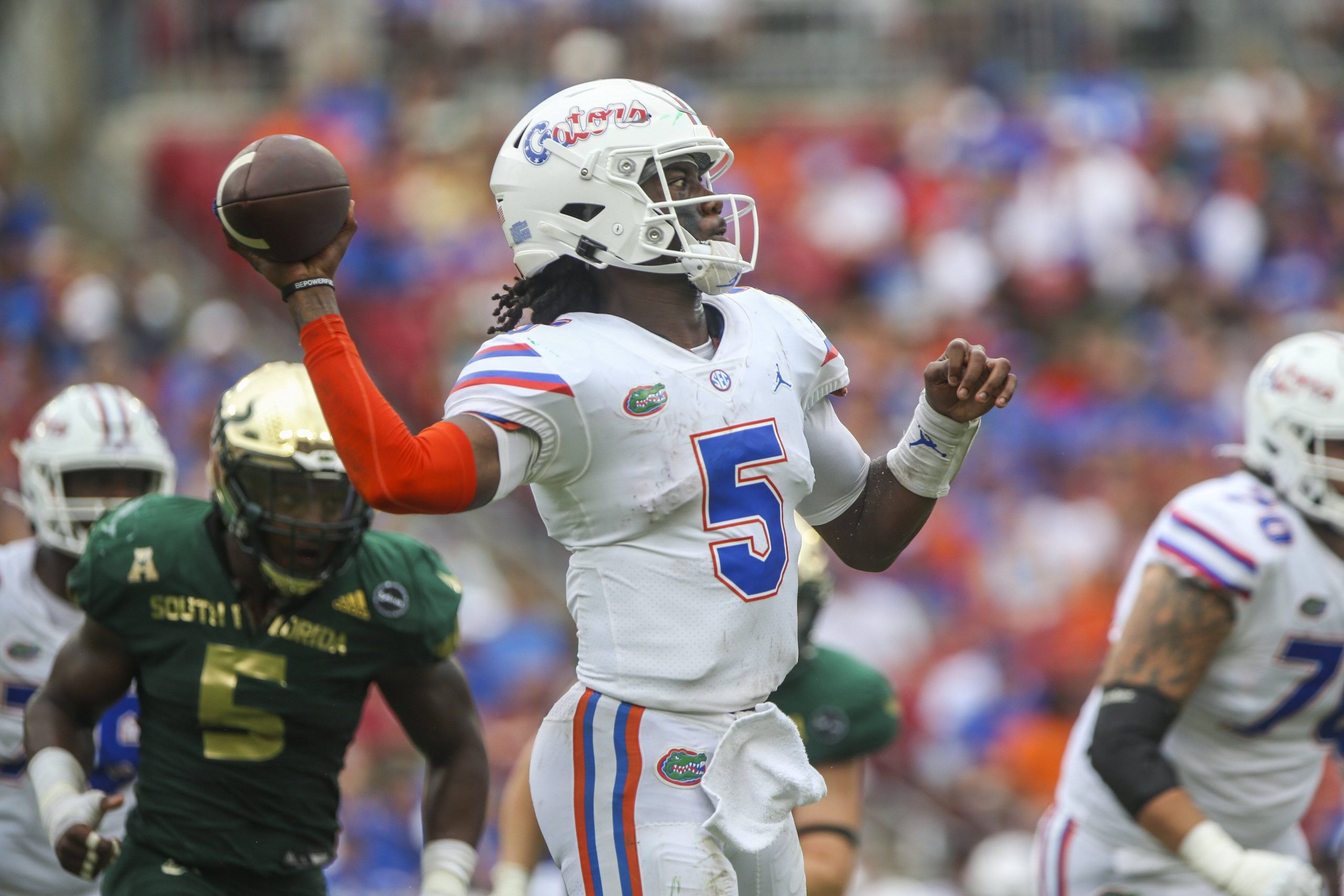 Alabama and Florida seldom meet in the regular season because of the SEC divisional setup and for that, the Gators should be thankful.

No. 1 Alabama brings a seven-game series winning streak into its first true road game of the season against the No. 11 Gators on Saturday afternoon in the Swamp. DraftKings lists the Crimson Tide as a 14.5-point favorite, as of Sept. 16.

If it is anything like their 2020 meeting … Well, it won’t be, because of the personnel changes. That was special.

Alabama’s 52-46 victory over the Gators in the 2020 SEC title game in Atlanta last December was a modern-era classic, an offensive coordinator’s dream and an NFL scout’s must-see.

The teams combined for 1,067 total yards and scored 32 points in the fourth quarter. The game was not decided until the Crimson Tide sacked Florida’s Kyle Trask deep in his own territory as time expired.

Mac Jones and Trask each passed for more than 400 yards, Najee Harris had 245 yards in total offense and four touchdowns and receivers DeVonta Smith, Kadarius Toney and Kyle Pitts had 100-yard games.

All are playing at the next level.

While the principals are different, the competitive spirit remains.

Alabama coach Nick Saban was at his coach-speak best after the Tide improved to 2-0 with an easy 48-14 victory over Mercer last week. So many flaws, to hear him tell it.

“If it stinks, it stinks,” Saban said about his offense, which struggled in the first quarter before scoring 31 straight points in a 23-minute span, ending with top Heisman Trophy candidate Bryce Young’s 8-yard touchdown pass early in the third quarter.

Saban sets a high bar — Young threw for 344 yards and four touchdowns and the Tide scored on their first five possessions in a 44-13 victory over then-No. 14 Miami, Fla., in the season opener in Atlanta.

Nick Saban on opening drives by offense: “If it stinks, it stinks. It smells bad for everybody. Did it smell bad for you? What do you want me to do, make excuses for them?"

Young, who had 227 yards passing and three touchdowns against Mercer, will have another opportunity to build his Heisman resumé against a second ranked Florida foe.

Recently, the Alabama-Florida rivalry has been most often conducted in the SEC title game. They have met there in Atlanta three times since 2015, with the Tide winning all three by an average of 19.3 points.

A Look At Alabama

Young has taken over seamlessly for Jones, who was third in the 2020 Heisman Trophy voting behind Smith and Clemson’s Trevor Lawrence. Trask was fourth.

Young, in his second year, has shown poise and field awareness, with seven touchdowns and a 70.8 completion percentage. He has not thrown an interception in 65 attempts.

Only Fresno State quarterback Jake Haener has thrown more touchdown passes (eight) without an interception, and he has played three games. Brian Robinson Jr. has 130 yards rushing in 22 carries as the No. 1 back, taking over for NFL first-rounder Harris.

Alabama's Brian Robinson Jr. talks about what it's like to go into every game with the target on their back:

"That's what we come to Alabama for." @BrianR_4 pic.twitter.com/JpUgs9LbzH

Alabama also has playmakers on defense. The Crimson Tide ranks No. 10 in the FBS in total defense at 241 yards per game and is giving up an average of 67.5 rushing yards and 2.01 yards per carry.

The unit will be without edge rushing linebacker Christopher Anderson for the rest of the season however, after he suffered a season-ending fractured foot against Miami.

The news on preseason All-American and top edge rusher Will Anderson is better. Anderson suffered a right knee injury against Mercer, but practiced Wednesday and with continued improvement could play Saturday, Saban said.

Starting cornerbacks Josh Jove and Jalyn-Armour Davis did not play against Mercer  because of undisclosed injuries, but Saban said he expects them back this week.

A Look At Florida

Florida does not have a quarterback controversy quite yet, but coach Dan Mullen does have decisions to make.

Junior Emory Jones is expected to start against Alabama, Mullen has said, but second-year freshman Anthony Richardson has looked every bit a prime-time player in relief appearances in the first two games.

Jones has run for 155 yards in two games, but his throwing accuracy has been suspect — 2,164 yards and two touchdowns with four interceptions, two in each game.

#Florida coach Dan Mullen on managing two quarterbacks (Emory Jones and Anthony Richardson) going into the Alabama game: "It's pretty simple. They know the plan. … They know what we have scheduled going into the game." Richardson has practiced every day this week.

Richardson has 275 yards rushing and 192 yards passing without a pick, and his chunk plays — an 80-yard scoring run and a 75-yard touchdown pass — were the highlights of the Gators’ 42-20 victory over South Florida last week. He had 267 yards and three touchdowns in seven touches before tweaking his hamstring late in the game.

Richardson “doesn’t always do the right thing, but he does special things,” Mullen said.

The Gators will be without one of their best defensive players. Middle linebacker Ventrell suffered a torn biceps tendon in a 42-40 victory at South Florida last week and is expected to miss the rest of the season. Miller had a team-high 88 tackles last season, including 3.5 sacks. He had six tackles in the Alabama game last season and had seven in the season-opening 35-14 victory over Florida Atlantic.

Alabama has owned this series, as they have so many others. The Crimson Tide has won the last seven meetings and 10 of the last 12, although regular-season games between the two are very rare.

The 2020 SEC championship game was their first meeting since consecutive SEC title games in 2015-16. The Gators have been within two touchdowns only once during the Tide’s seven-game winning streak, that in last season’s shootout.

Alabama is 1-1 ATS this season and was 9-4 ATS while winning the FBS title in 2020, although it failed to cover the 16-point number against the Gators. The Tide was 7-4 when favored by at least two touchdowns.

The principals from last season’s shootout are gone. Alabama, as usual, has reloaded, but questions remain arming the Gators’ offense. The Crimson Tide is worth a play.