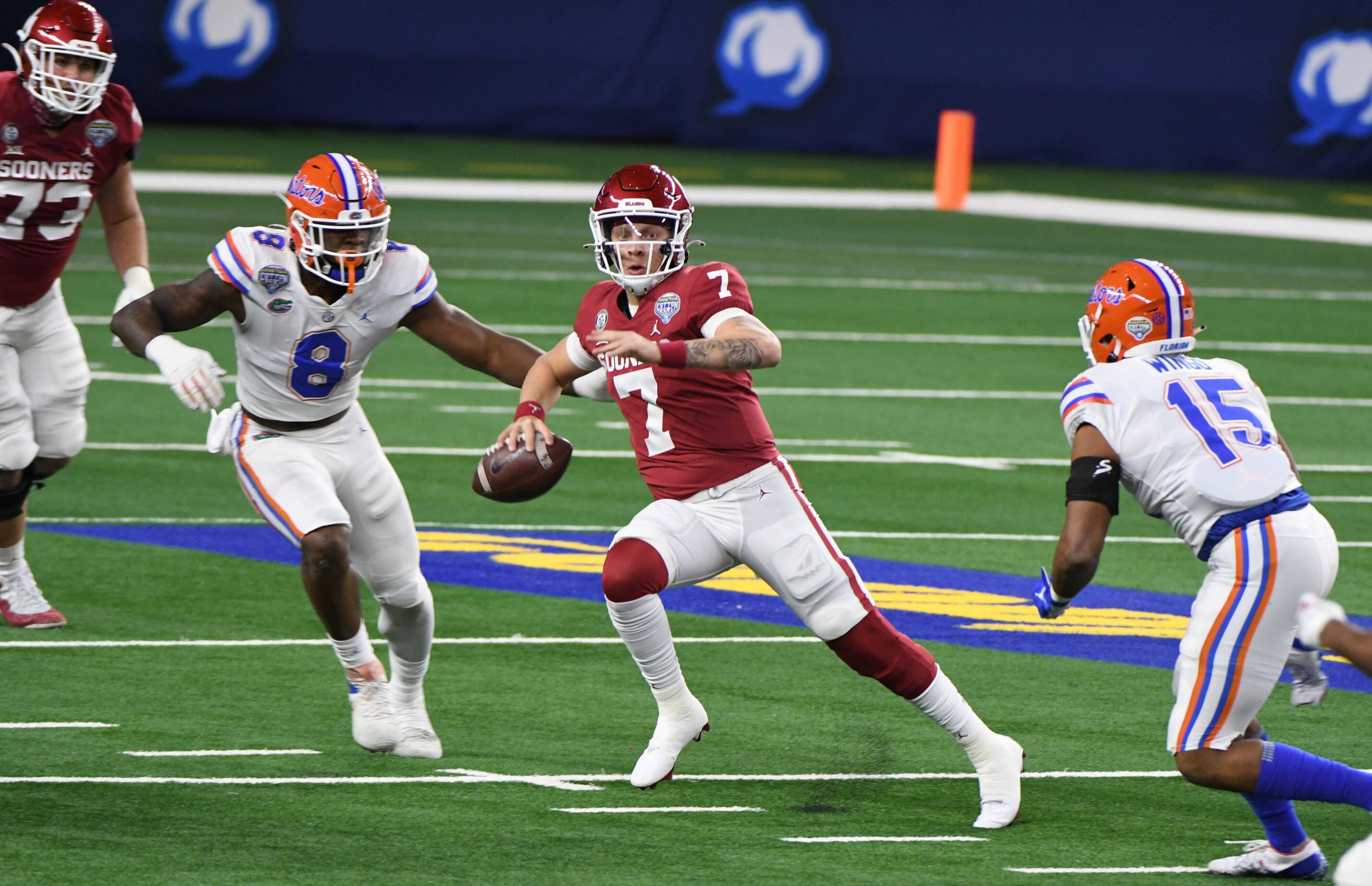 The 45-pound cast bronze was sculpted in the likeness of former NYU halfback Ed Smith (a friend of the artist), who is protecting a football within his sturdy left arm while extending his right in full straight-arm mode. So old-school quaint. It’s the most deceiving piece of hardware in college sports.

There are only two requirements a Heisman candidate must fulfill these days:

b) play for Alabama.

Since 2000, 20 of the 21 Heisman winners fit those criteria. Seventeen are quarterbacks.

Three of the non-quarterbacks are Crimson Tide running backs Mark Ingram (2009) and Derrick Henry (2015) and wide receiver DeVonta Smith, the 2020 winner. The outlier, USC halfback Reggie Bush, had his 2005 award vacated due to a violation of NCAA rules.

Smith had a wonderful 2020 season, with 117 receptions for 1,856 yards and 23 touchdowns, but it is not a stretch to say that Smith won because Clemson quarterback and preseason favorite Trevor Lawrence missed two games because of COVID-19. Lawrence finished second; Alabama quarterback Mac Jones was third.

The NFL knows — Lawrence was the first player taken in the 2021 draft; Smith went No. 10, after three quarterbacks were off the board. Quarterbacks dominate the field of contenders again this season. Oklahoma’s Spencer Rattler, North Carolina’s Sam Howell, Clemson’s D.J. Uiagalelei, Southern California’s Kedon Slovis and Georgia’s J.T. Daniels have the numbers.

Iowa State running back Breece Hall and Texas running back Bijan Robinson, considered the best running backs in the FBS, will have to do something very special to wrest the award from one of those guys. Some other running back may break through, the way Oklahoma freshman Adrian Peterson did when he had 1,925 yards rushing in 2004. Even then, he finished second to USC quarterback Matt Leinart.

A defensive player has no chance. Michigan cornerback/punt returner Charles Woodson is the last defender to win, in 1997. He is the only defender to win.

A look at the field:

Spencer Rattler, QB, Oklahoma (+600):  Rattler passed for 3,031 yards with a 67.5 completion percentage and 28 touchdowns to lead the Sooners to eight straight victories as a redshirt freshman last season after blowing off the rust in losses to Kansas State and Iowa State in Weeks 2-3. Rattler balanced 387 yards passing with three interceptions against Kansas State in Week 2, but he had only two of his seven interceptions in the final 188 attempts. Pro Football Focus gave him a 92.5 passing grade, behind only NFL first-rounders Zach Wilson of BYU  and Mac Jones of Alabama.

Rattler also rushed for six touchdowns. The familiarity quotient is high. Oklahoma quarterbacks have won two of the last four awards — Baker Mayfield (2017) and Kyler Murray (2018). Rattler was a low-volume passer last season, averaging 28.8 throws per game, and that might work against him if it continues.

D.J. Uiagalelei, QB, Clemson (+750): The loss of NFL No. 1 pick Trevor Lawrence will not sting as much as you might expect. All Uiagalelei did in two starts when COVID sidelined Lawrence last year was pass for 781 yards and four touchdowns and rush for two more scores in a victory over Boston College and a loss to Notre Dame. He led the Tigers back from an 18-point deficit against BC and his 439 yards passing against Notre Dame broke Deshaun Watson’s school freshman record. At 6-foot-4 and 250 pounds, Uiagalelei is built to last.

JT Daniels, QB, Georgia (+1200): USC’s loss was Georgia’s gain in 2020, when Daniels passed for 1,231 yards and 10 touchdowns while starting (and winning) the final four games of the season after taking the job from Stetson Bennett. Daniels took his lumps as a true freshman starter at USC in 2018 and transferred to Georgia after a knee injury cost him all but one game in 2019.

Sam Howell, QB North Carolina (+1400): Howell has posted remarkably similar seasons in his first two as a Tar Heel — 3,641 yards, 38 touchdowns and seven interceptions as a freshman; 3,586 yards, 30 touchdowns and seven interceptions last season. He had two monster games a year ago, throwing for 550 yards and six touchdowns against Wake Forest and 443 yards and four touchdowns against Virginia. North Carolina lost top running backs Javonte Williams and Michael Carter to the NFL draft, which could work against Howell by putting an even larger bulls-eye on his back.

Kedon Slovis, QB, Southern California (+2800): When your high school quarterback coach is NFL Hall of Famer Kurt Warner, you learn things. Slovis took over as the USC starter as a true freshman in 2019 after J.T. Daniels suffered a season-ending knee injury, and all he did was throw for 3,502 yards with 30 touchdowns and nine interceptions. Daniels transferred to Georgia in the offseason, and Slovis kept up his pace in the Pac-12’s COVID-shortened, six-game 2020 season.

He is averaging 301.3 yards per game while completing 70 percent of his passes with 47 touchdown passes in 18 career games. Slovis excels in reading defenses out of the USC speedy spread offense, and the Trojans always have a full complement of skill position players to help. A showcase game against Notre Dame never hurts the national profile.

Only 8 days until College Football returns🏈

Give us one sleeper pick to win the Heisman this year⬇️pic.twitter.com/LBwkYVloUh

Bijan Robinson, RB, Texas (+3500):  Sophomore Robinson brings the “wow” stat into the season — he rushed for 355 yards and five touchdowns on 19 carries, 19, in the final two games of 2020. That’s 18.7 yards per rush. Robinson also had five receptions for 88 yards and two touchdowns in the last two, against Kansas State and Colorado. He gained 20 yards or more on 14 touches during the season. New Texas coach Steve Sarkisian knows what he has.

Breece Hall, RB, Iowa State (+4000): Being the best returning running back used to be good for something — see Ron Dayne, Ricky Williams and Eddie George, Heisman winners in a five-year period that ended in 1999. Now, it takes a monster year and injuries to a signal-caller to get in the conversation. A running back has not finished higher than fifth in the balloting since Stanford’s Bryce Love in 2017, when Saquon Barkley was fourth, Rashaad Penny was fifth and Jonathan Taylor was sixth. Hall had the requisite monster year in 2020, leading NCAA FBS with 1,572 yards in the Cyclones’ run to national prominence. He added 21 touchdowns. It got him a sixth-place Heisman finish.

Bryce Young, QB, Alabama (+900) and C.J. Stroud, QB, Ohio State (+1400): Sophomore Young and redshirt freshman Stroud are following in the footsteps of Mac Jones and Justin Fields, respectively, which lends a certain air of inevitability to their Heisman consideration despite limited game experience. Their credentials are impeccable, and their surrounding casts will be elite. The last freshman quarterback to win the Heisman was Florida State’s Jameis Winston (2013), and Texas A&M freshman Johnny Manziel won it the year before. They are the only two.

The pick: Kedon Slovis (+2800). Slovis is not receiving the attention of the other top quarterbacks, but his passing numbers stand out. Like guru Warner, Slovis does not run, which is a common thread among recent winners. Neither did Oklahoma’s Sam Bradford (2008) or Winston, however. Quarterbacks are always a sack away from an award-dooming injury, but at this price Slovis is hard to ignore.