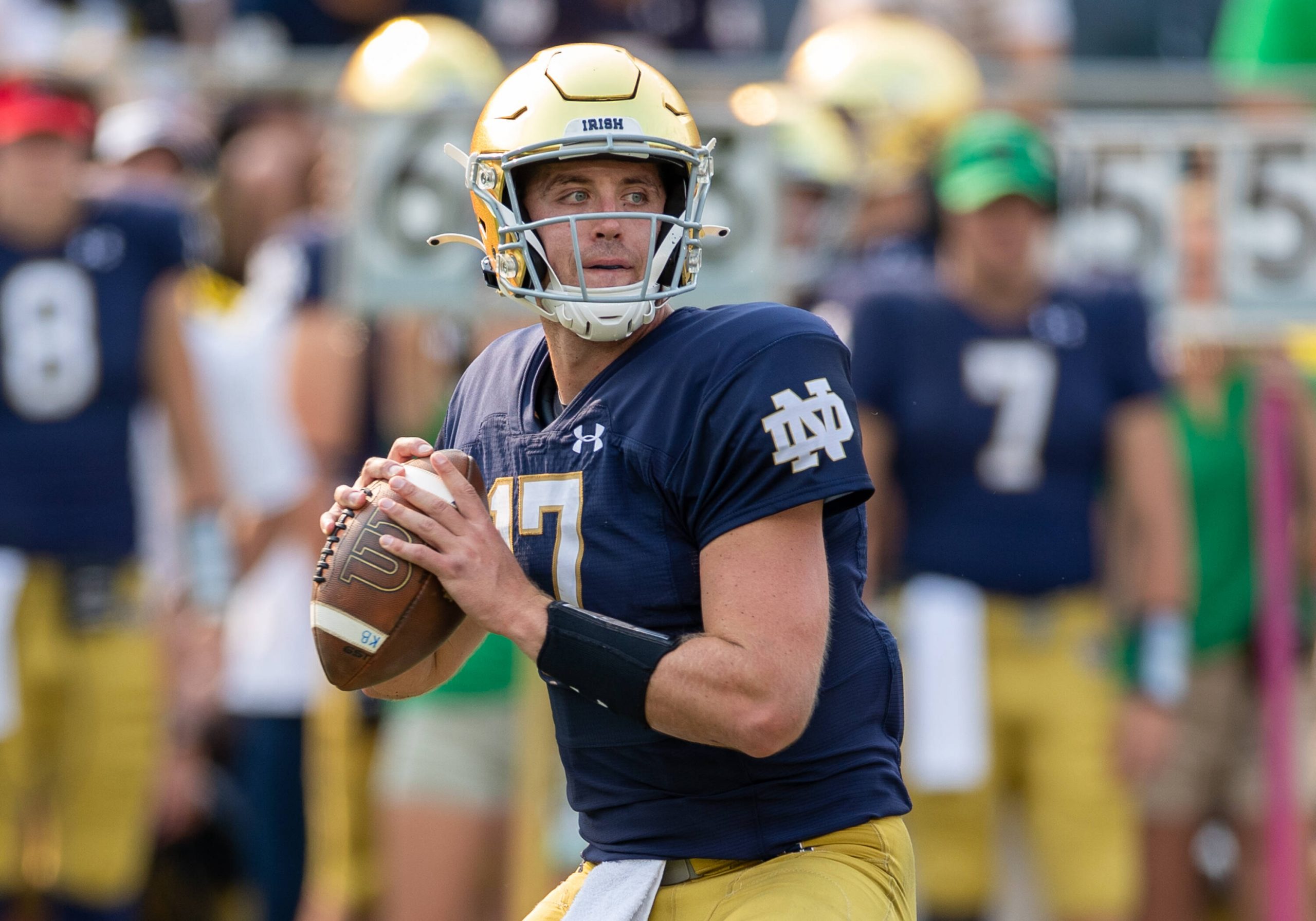 It is hard to know exactly what to make of Notre Dame and Wisconsin as they prepare to meet in what the Irish like to call the “Shamrock Series” at Soldier Field on Saturday.

The No. 18 Badgers (1-1) are 6.5-point favorites, even though No.12 Notre Dame has a better record, is ranked higher and is undefeated, albeit barely.

Let’s start there. The 3-0 Irish needed overtime to beat winless Florida State 41-38 in the season opener and needed a late touchdown to beat Toledo 32-29 in Week 2, a victory that looked even more suspect after the Rockets were held without a touchdown in a 22-6 home loss to Colorado State last week.

On the other side, Wisconsin has dominated the time of possession in its first two games while playing coach Paul Chryst’s favorite game — pound the line of scrimmage with a fill-in-the-blank running back (Clemson transfer Chez Mellusi, so far). And then pound the line again.

Mellusi has 51 carries for 265 yards and the Badgers have held the ball for more than 40 minutes in each of their first two games, averaging an FBS-high 40:57 of ball possession per game.

Neither has been game-changingly effective. Mertz threw two interceptions in the season-opening 16-10 home loss to No. 6 Penn State, the picks ending the Badgers’ final two drives. Wisconsin failed to score on three possessions inside the Nittany Lions’ 10 and did not score on another drive inside the 25.

Mertz was not asked to do much in a 34-7 victory over Eastern Michigan two weeks ago, when the Badgers had 352 yards rushing (Mellusi had 144 and a touchdown). Mertz has not thrown a touchdown pass this season, and the Badgers are 0-4 in 2020-21 when he throws a pick.

Coan, the less mobile of the two, has thrown for 828 yards and eight touchdowns with two interceptions this season, but he has been sacked 14 times by a leaky offensive line that lost three starters to the NFL and its top two left tackles to injury this season.

A Look At Wisconsin

Granted the sample size is teeny, but the Badgers are playing some of the best defense in the FBS, especially at the line of scrimmage.

Wisconsin ranks first in the FBS in rushing defense at 33 yards per game and is second in total defense at 194.5 yards. (No. 14 Iowa State leads at 194.0.) Eastern Michigan’s only score was a 98-yard interception return in the fourth quarter.

Jack Coan on Wisconsin: "To be honest, they do everything well on defense … they've always been one of the best defenses in the country."

If anybody would know, it's him. Coan goes against his former school of four years next weekend at Soldier Field.

The Badgers are averaging 266 yards rushing per game, with Mellusi carrying much of the load, but they are still waiting for Mertz to exhibit the form he showed in his first start in 2020, when he was 20-of-21 for 248 yards and five touchdowns in a 45-7 home rout of Illinois.

Wisconsin’s next two games were cancelled because of a Covid outbreak, however, and the Badgers — and Mertz — were never the same. Included was a three-game losing streak in which they failed to break double figures scoring in any of the three.

The offense sputtered against Penn State, which embellished its resume with a 28-20 victory over No. 23 Auburn last week.

A Look At Notre Dame

Grad transfer Coan was 12-6 as a starter for Wisconsin before the more athletic Mertz took over. Everyone said the right things before they met again.

“Obviously we have respect for Jack and appreciate who he is as a person and player here,” Chryst said. “But it’s Wisconsin versus Notre Dame.”

Notre Dame has given up an average of 378.3 yards in total offense in its first three games and was outgained by both Florida State and Purdue, although by only a few yards each. Florida State overcame an 18-point deficit in the fourth quarter, gaining 209 yards on three drives, before missing a field goal on the first possession of overtime.

Playing without big-play quarterback Ian Book has been an adjustment. Book won a school-record 30 games as a starter and is second in school history in passing yards and total offense behind Brady Quinn.

The Irish are averaging a meager 2.9 yards per carry, and they have given up 15 sacks, the third-most among the 130 FBS programs.

Both Wisconsin and Notre Dame face ranked opponents next week, when the Badgers play host to No. 12 Michigan and the Irish welcome No. 5 Cincinnati to South Bend.

Wisconsin has the easiest schedule in the Big Ten West, and while it can hardly afford another league loss, it also has some wiggle room after the next two with contests against Illinois, Army and Purdue. Its next stiff test is Oct. 30 against No. 5 Iowa, again in Madison.

Notre Dame would be in more peril if it loses to Cincinnati, because a loss there would keep the Bearcats ahead in the race for a spot in a New Year’s Six bowl game.

The Irish follow Cincinnati with Virginia Tech, USC and No. 21 North Carolina.

Wisconsin is 1-1 ATS after losing as a 6.5-point favorite against Penn State, which has since beaten Ball State and Auburn. The Badgers were 3-3, 2-4 ATS in the all-Big Ten season in 2020 before covering a 10-point number in a 42-28 victory over Wake Forest in the Duke’s Mayo Bowl. Wisconsin is 1-4 in its last five when favored by seven points or fewer.

Wisconsin has demonstrated it can control both lines of scrimmage, and if Purdue could keep the Irish’s rushing attack in check, the Badgers could also. Chryst and his staff know about everything they need to know about Coan after coaching him for three seasons.

Until the Badgers develop better quarterback play, they cannot be considered a top challenger for the Big Ten’s usual spot in the CFP playoff. But laying 6.5 points to an unconvincing Irish team is not too big a leap.