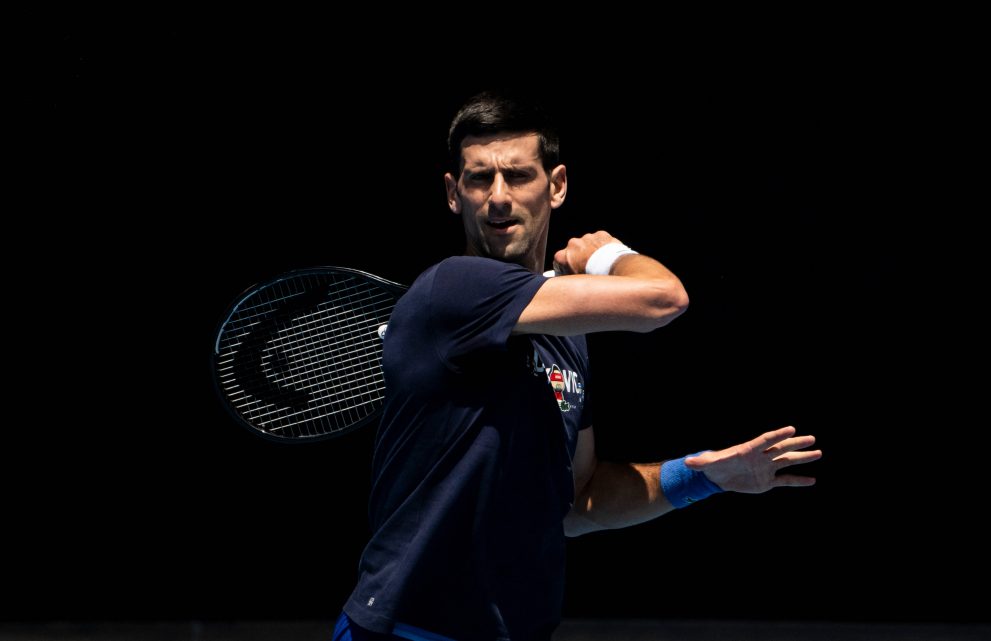 Novak Djokovic makes headlines wherever he plays, but never before has there been such focus on the Serbian ahead of a tournament he might not even participate in. As things stand, the world number one is scheduled to play on Monday at Melbourne Park, after a very public tug-of-war with the Australian and Victorian authorities over his vaccination status, he has had his visa cancelled for a second time. What shape Djokovic will be in is still to be seen.

The 34-year-old’s natural fitness levels mean he may have absorbed four days in immigration detention better than most would have been able to, but it might take Djokovic a few rounds to find top form at the 2022 Australian Open. He frequently enters Grand Slam tournaments cold, skipping warm-up events at Wimbledon and the US Open, but this will be something different entirely.

If Djokovic can find his groove, Daniil Medvedev might be the only rival capable of stopping him. The Russian made his Grand Slam breakthrough at the 2021 US Open and finished his season strongly with final appearances at the Paris Masters and the ATP Tour Finals. Medvedev’s defensive game gives him an edge on hard courts. After making last year’s Australian Open final, the 25-year-old will be aiming to take one more step this year.

Sascha Zverev looks to be in good shape with the German ending 2021 with his second ATP Tour Finals title. Zverev is mentally stronger than he was 12 months ago and he has the weapons to hit through any opponent. His form in the final third of last season added to the growing belief that Zverev, along with Djokovic and Medvedev, is a member of an emerging new ‘Big Three.’

Roger Federer will be missing from this year’s Australian Open as he continues his recovery from knee surgery while Dominic Thiem still isn’t fit enough to feature. Rafael Nadal will, however, participate in his first Grand Slam tournament for close to nine months. Five-time finalist Andy Murray, who will face Nikoloz Basilashvili for the second time in two weeks in the first round, will also return to Melbourne Park for the first time in two years.

Nadal only returned to action a few weeks ago, with the Spaniard also testing positive for Covid-19 over Christmas. This adds to the recent complications he has faced, but his title success at the Melbourne Summer Set suggests he could be a threat at the first Grand Slam of 2022. The 35-year-old hasn’t played best-of-five-set tennis since the 2021 French Open, but he nonetheless looks fitter than he has done in a long time.

Jannik Sinner, Stefanos Tsitsipas, Andrey Rublev, Matteo Berrettini (whose first-round match against Carlos Alcaraz promises to be a blockbuster), Casper Ruud and Denis Shapovalov all have the quality to make a deep run in the men’s singles. But predicting the bracket at the Australian Open, the first Grand Slam of the season, can be difficult at the best of times, never mind after the Covid-affected seasons of 2020 and 2021.

In the women’s singles, Ash Barty enters her home Grand Slam as the world number one. The 25-year-old has only ever made it as far as the semi-finals at the Australian Open, raising questions over her ability to handle the weight of expectation. However, Barty’s title win in Adelaide underlined her status as the sport’s frontrunner at this moment in time.

2021 champion Naomi Osaka has only just returned from a four-month spell out of the sport, but was in good shape at the Melbourne Summer Set before withdrawing with a minor abdominal strain. This injury isn’t expected to stop Osaka from competing in the Australian Open, though, which is just as well because Melbourne Park has brought the best out of the Japanese in the past.

Success at the WTA Finals in November makes Garbine Muguruza a force to be reckoned with after a resurgent 2021 season. Former world number one Simon Halep looks to be over the calf injury that saw her drop down to number 20 last year and has returned to winning ways by going all the way at the Melbourne Summer Slam. The first Grand Slam of the year offers more than one player a shot at redemption.

Teen sensation Emma Raducanu enters the 2022 Australian Open on the back of a title triumph at the US Open, but the 19-year-old has struggled since winning at Flushing Meadows. A 6-0, 6-1 defeat to Elena Rybakina in Raducanu’s first match at the Sydney Tennis Classic suggests the 19-year-old might find this Grand Slam tougher to move through, especially given her difficult opening round against former US Open champion Sloane Stephens.

Rybakina herself could be one to keep an eye on with the Kazakh making the final of the Adelaide International. An injury forced her to withdraw from the Sydney warm-up event after the 55-minute victory over Raducanu, but this was widely believed to be only a precautionary move ahead of the Australian Open. Rybakina certainly has the power to take the game to most opponents.

Iga Swiatek is another player who has enjoyed a strong start to 2022, winning matches against Leylah Fernandez and Victoria Azarenka at the Adelaide International. The Pole hasn’t built on her maiden Grand Slam title, won at the 2020 French Open, in the way many expected her to, but Swiatek’s court craft means she can never be discounted.

Anett Kontaveit, Paula Badosa, Maria Sakkari, Ons Jabeur and Aryna Sabalenka are also names worth tracking at Melbourne Park over the next two weeks. Sabalenka, however, is currently experiencing some serious issues with her serve, with the Belarusian making a barely believable 74 double faults in her last four matches.

The build-up to the 2022 Australian Open has been dominated by non-tennis stories, most notably concerning Djokovic, but there are plenty sporting narratives to follow. After the chaos and disruption of the last two years, tennis is hoping for a more orthodox season in 2022. How the first Grand Slam of the year unfolds will provide an indication of what to expect over the next 12 months.