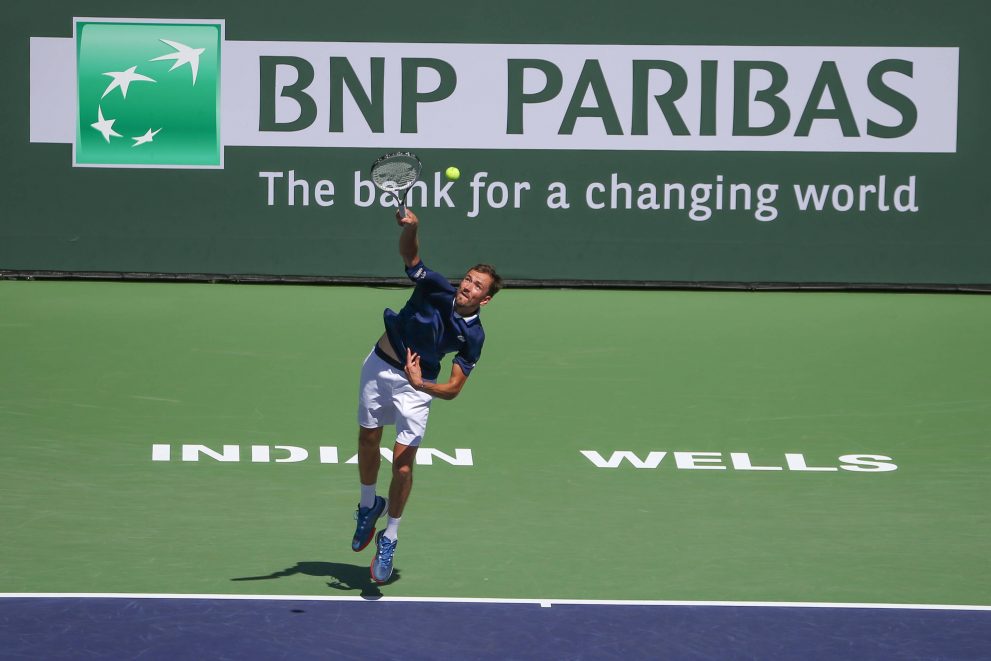 Last year, Hubert Hurkacz made his Masters 1000 breakthrough by winning the Miami Open. This year, the field is open enough for another relative outsider to make a name for themselves with Novak Djokovic, Rafael Nadal and Roger Federer all missing from the entry list.

Taylor Fritz grasped his opportunity last week, winning his first Masters 1000 title by defeating Nadal in the final of Indian Wells. The American has now risen to 13th in the ATP rankings and could be a force once again in South Florida, although the ankle injury he suffered in California may yet be a concern.

Andrey Rublev will surely fancy his chances of making a run at the Miami Open after making the semi-finals at Indian Wells. However, the Russian could face a challenging second-round test against Nick Kyrgios who has found his groove again and pushed Nadal all the way in the desert last week. Even if Rublev makes it through that, Matteo Berrettini could still wait in the quarter-finals.

Daniil Medvedev lost his number one ranking by suffering a shock loss to Gael Monfils in the round of 32 at Indian Wells, but still enters the Miami Open as the highest-ranked player in the draw. The US Open champion could face the 2009 and 2013 champion, Andy Murray, in the second round, and would go into the draw with confidence as the bookie’s favourite.

Medvedev has only ever made the quarter-finals at the Miami Open, a tournament that hasn’t always been the scene of the Russian’s best tennis, and it’s not Murray who could upset him in South Florida. 27th seed Cristian Garin is a potential third-round opponent with Roberto Bautista Agut or Jenson Brooksby likely to be waiting in the fourth round. Defending champion Hurkacz is also in Medvedev’s quarter of the draw.

Carlos Alcaraz could well be the player who makes his breakthrough at the 2022 Miami Open with the teenage Spaniard widely considered the best young talent in men’s tennis. Alcaraz had Nadal on the ropes at Indian Wells and has all the physical attributes to win major titles in the near future.

There isn’t a player in the men’s singles draw at this year’s Miami Open who will want to take on Alcaraz. Alcaraz could meet Marin Cilic in his half of the draw and the Spaniard, whose skill and physicality has helped him rise to 16th in the ATP rankings, might well be considered the favourite if that meeting materialises.

Sascha Zverev struggled at Indian Wells and has his character called into question following his outburst in Acapulco, but the German can’t be discounted from contention. Nor can Stefanos Tsitsipas despite a tricky potential quarter-final meeting against Felix Auger-Aliassime.

In the women’s singles, Iga Swiatek will surely be a formidable force after her victory at Indian Wells. Indeed, the 20-year-old was dominant in the Californian desert, dropping just two sets on her way to the title. Swiatek has started the 2022 season in exceptional form, also winning the title at the Qatar Open and making the semi-finals of the Australian Open.

Just like in the men’s singles, the women’s world number one is missing with Ash Barty having just announced her retirement from tennis at the age of 25. Aryna Sabalenka is the top seed on the entry list, but the Belarusian has struggled for her best form this season and could do with a deep run at the Miami Open ahead of the clay-court season and the summer months.

Her dreams are fulfilled!

Ash Barty has retired from professional tennis at 25. She leaves the game after being world number 1 for more than two years.

Thanks for the memories Ash!

The draw could pit US Open champion Emma Raducanu against former world number one Simona Halep in the third round. Raducanu has suffered from injury and inconsistent form, while Halep is fresh from making the semi-finals at Indian Wells and looks more like her old self after a difficult 2021 through injury.

Anett Kontaveit will be a threat at the Miami Open, but could have a tricky path through to the semi-finals with Alize Cornet projected to meet the third seed in the third round. Beyond that, Kontaveit could come up against the winner of a meeting between Leylah Fernandez and Angelique Kerber, with Naomi Osaka and Ons Jabeur also in this half of the draw.

Fifth seed Paula Badosa has landed in a challenging quarter with the Spaniard projected to meet Indian Wells finalist Maria Sakkari in the semi-finals. First, however, Badosa will likely have to make it past Marketa Vondrousova. The winner of this match could take on Victoria Azarenka with Elise Mertens and Madison Keys also in this quarter.

On the basis of the seedings, Garbine Muguruza could face Swiatek in the final four and the former French Open and Wimbledon champion has the power from the baseline to stick with the Pole in the rallies. However, Muguruza is currently desperate for form and has suffered a slow start to the new season.

Petra Kvitova is projected to face Muguruza in the second round and hasn’t lost to the Spaniard since 2015 when they played each other for the first time. Jelena Ostapenko is also in this section of the draw and while the Latvian was disappointing at Indian Wells, her strong form in Dubai and Qatar is still fresh in the memory.

However, Ostapenko will have to make it past Shelby Rogers, who beat the Latvian only two weeks ago in the desert, or Amanda Anisimova in the first round. There is intrigue throughout the women’s singles draw with a number of potential winners and challengers. Almost every match will have the capacity for drama.

The Miami Open has gone through a lot of changes in recent years. The tournament moved from its Key Biscayne site to Miami Gardens in 2019 and there is a sense it has yet to truly settle into its new surroundings. A captivating tournament over the next two weeks would certainly help it do that.