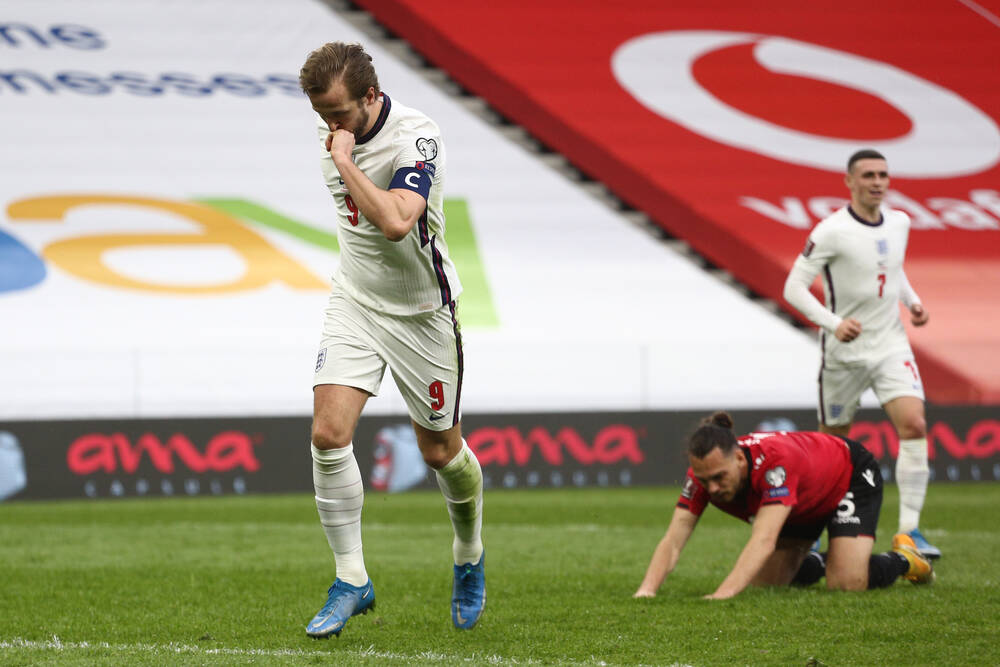 It was an impressive victory in Hungary for a number of reasons for Gareth Southgate’s side. Both on and off the pitch, they showed great maturity and patience in navigating through a difficult fixture.

In contrast, a home tie against lowly Andorra on Sunday should be a much more straightforward experience with Southgate able to make as many changes as he likes and still put them away comfortably.

England defensively under Southgate have been excellent, and now they face a side they’ve beaten in all four games without conceding, with an aggregate of 16-0. Andorra have conceded at least three against the top 50 sides they’ve faced this year.

The Three Lions have been imperious at Wembley under Southgate, with 21 wins in his 29 matches at England’s headquarters, and he’ll no doubt make that 22 regardless of the team he fields.

And with Poland away up next, Southgate would be wise to make wholesale changes, including sitting Raheem Sterling and Harry Kane after they led the way against Hungary, and despite their fantastic records.

When that means starts for the likes of Patrick Bamford, Bukayo Saka, Jadon Sancho, Jude Bellingham, Kieran Trippier, Reece James and Trent Alexander-Arnold — you can understand why a win is a mere formality.

Andorra may well have beaten San Marino last time out, but in World Cup qualifiers they’ve got a woeful record away from home with 20 straight defeats and no goals scored in the last 13. They may make it awkward at first with a packed defence but it’ll just be a case of how many England get.

With England 1/200 for victory then all the major betting odds are massively skewed in their favour, but Bamford to score two goals at 7/5 is one that attracts the eye and even more so should he get the start.

Three games in a week this early in the season would be a risk for Kane and Sterling, even one that should be easy, and it’s the perfect opportunity to give Leeds striker Bamford a start and see what he’s made of.

A half-decent start from the Scots came crashing down in 93 seconds in Copenhagen as Denmark ran out 2-0 winners, but that was just their first defeat, and a win against Moldova on Saturday will put them right back in the mix.

Denmark are running away with this group, but as Scotland face Moldova as Israel play Austria the race behind the Danes is really hotting up. The Scots then travel to Austria in midweek in what could be the crucial tie for them.

Steve Clarke’s side are aiming to back up this summer’s Euros with a first World Cup since 1998, and beating the bottom side in the group and the team ranked 175 in the world would be a nice confidence boost.

The Scots have dispatched teams outside the top 100 with ease recently, winning their last four such matches at home by at least two goals, and with Moldova already suffering their heaviest defeat in an 8-0 thrashing by Denmark then the hosts should be eyeing goals.

Scotland are 8/15 to overcome a -1 handicap again, although if you take out that Denmark result then Moldova’s other last four games against teams inside the top 50 in the world have ended in 2-0 defeats.

John McGinn has been the class act for Scotland and the goals have been flying in for the Aston Villa man, with nine in eight home qualifiers putting him level with Ally McCoist for the most ever for his country. McCoist’s nine goals came in 21 games.

McGinn has scored in his last two World Cup qualifiers at home and returns to the squad after missing the trip to Denmark while isolating with coronavirus.

Wales make the trip to Russia to face Belarus knowing they’re not as far behind as the standings may suggest in this group, having two games in hand on the Czech Republic, who they beat in their opener, and sitting four points behind them.

The Czechs also go to Belgium on Sunday, who Wales have already played away from home, so a victory here and they’ll be right back in that race for second place. Belgium will win this group with relative comfort.

Belarus kicked off with a 4-2 win over Estonia, but that’s as many wins as they’ve managed in each of their last two World Cup qualifying campaigns. They’ve also only got a friendly win over Greece to point to as a win over top 50 sides in the last five years.

It’s a tough trip logistically for Wales getting to Kazan in Russia, where it’s being staged, but they’ll have to put visa issues and injuries to the likes of Aaron Ramsey aside as they look to make the World Cup for the first time since 1958.

Wales have won four out of five against Belarus, but that one defeat was their last away trip to Minsk in 2002. They’re a better side now but still have only won six of their last 29 World-Cup-qualifying away games and have had troubles scoring with just nine goals in their last 16 away games in all competitions.

Gareth Bale remains their talisman, although interestingly he’s not managed a goal in his last 12 competitive outings for Wales — instead turning provider with seven assists in those games.

Under 2.5 goals at 8/13 seems the prudent approach to this game but one of them could well come in the first half — as there’s been a goal in 11 of the last 12 competitive games Belarus have played in.

You may be forgiven for rubbing your eyes if you’ve looked at this group table but it is correct. Unbeaten Armenia are leading the way with three wins and a draw and go into this game a point ahead of Germany.

North Macedonia are the jokers in the pack here too, as they’ve already beaten Germany and drew 0-0 with Armenia in their last two games, so this group could get even more congested and intriguing after Sunday.

Hansi Flick is now in charge of Germany and enjoyed a modest 2-0 win over Liechtenstein in his first game, but will realise they must follow that up here and avoid another huge upset like the North Macedonia defeat.

Flick on Sunday's game: "It’s an important game; Armenia are leading the group and we can overtake them with a win, so that’s our aim. Off the ball everything is in order, we need to be more effective and work in harmony with each other going forward." pic.twitter.com/1HJJ7Y7oQ6

After all, Armenia are ranked 88 in the world and haven’t beaten a top-20 side in eight years, and Germany’s North Macedonia upset was their first World Cup qualifying defeat at home since England’s historic 5-1 success almost exactly 20 years ago.

Armenia are unbeaten in four competitive away games but scoring goals has been an issue, and that’s not a good problem to have with Germany keeping seven clean sheets in their last nine home World Cup qualifiers.

Armenia will make this tough in Stuttgart but Germany will have too much and with them not exactly lighting it up in front of goal of late, a home win with under 3.5 goals at 8/5 looks like the perfect betting angle to attack.