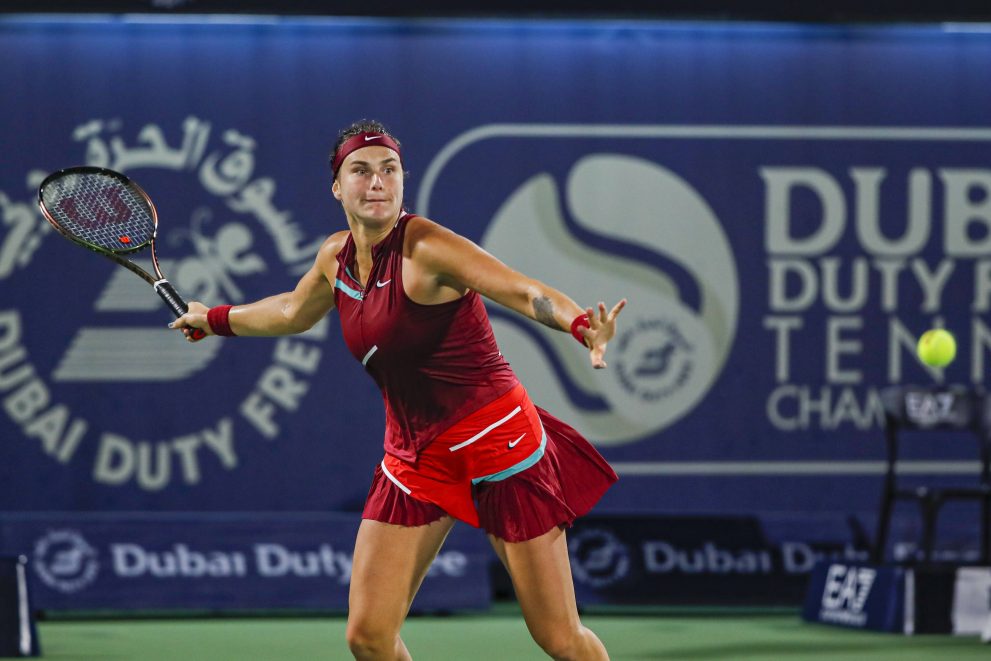 The dust hasn’t long settled on the first Grand Slam of the year, with Ashleigh Barty validating her number one ranking by winning the Australian Open women’s singles title. Barty, however, won’t be at the first WTA 1000 event of 2022 and that could open up the field at the Qatar Open. The tournament might actually benefit from Barty’s absence.

This isn’t to say the Qatar Open field isn’t a strong one. In fact, Barty is the only player in the top 10 of the WTA rankings not on the tournament’s entry list, with world number two Aryna Sabalenka the top seed after a good run at the Dubai Tennis Championships. The Belarusian has recovered from some early-season issues with her serve to find some consistency again.

If Sabalenka, who won the Qatar Open in 2020, can channel her natural aggression in the right way, she will take some stopping. One opponent capable of sticking with her in rallies from the baseline is Garbine Muguruza, who is down on the entry list as the number six seed, although the Spaniard failed to make it past the round of 16 in Dubai.

In a major upset, Kvitova takes down No. 1 seed Sabalenka in straight sets. 🚨#DDFTennis pic.twitter.com/A5LMNo88d8

Muguruza, who made last year’s Qatar Open final, was the defending champion in the United Arab Emirates and has struggled for form over the early part of the season. The 28-year-old was expected to be competitive at the Australian Open, but crashed out in the second round. Her 3-3 win-loss record for 2022 can certainly be improved upon.

Naomi Osaka is another big name not included on the entry list for the 2022 Qatar Open, with US Open champion Emma Raducanu also missing out on the tournament. However, French Open champion Iga Swiatek is in Doha and will be a contender to go all the way on the basis of her performances at the Australian Open last month.

Swiatek fell just short of making the final at Melbourne Park, falling to Danielle Collins in the final four, but remains one of the most explosive players in the women’s game right now. Jelena Ostapenko got the better of Swiatek in Dubai, but the Pole likes to dictate points and will be one of the most dangerous players in the draw. When Swiatek is serving well and finding the lines, she is borderline unstoppable.

Ostapenko also took out Petra Kvitova at the Dubai Tennis Championships with the Czech the defending champion of the Qatar Open after triumphing in Doha 12 months ago. Kvitova suffered a first round exit at the Australian Open that had some fans and experts predicting that this might be her final year on the tour. A strong showing in at this tournament could help her build ahead of a crucial summer period of the season.

If there is a player that has a point to prove in 2022, it’s Simona Halep. Injury seriously hindered the former world number one last year, but demonstrated glimpses of her brilliance in a run to the fourth round of last month’s Australian Open. Halep was certainly impressive in her 6-4, 6-3 dismantling of Ons Jabeur in Dubai and another good run in Doha could push her higher up the rankings from her current 13th spot. It’s entirely feasible that she could be back in the top 10 by the summer.

1st final of the year for Ostapenko!

Anett Kontaveit could be a formidable force in Doha. The Estonian only made it as far as the second round at the Australian Open, but won her first title of the year in St Petersburg last week. Kontaveit, who has risen up the rankings to sixth, is on a 20-match winning run on indoor surfaces, but the slow surfaces at the Qatar Open should suit her despite the fact they are outdoor.

Renowned for being strongest on clay, Barbora Krejcikova’s run to the quarter-finals of the Australian Open proved that she can perform on hard courts. However, the Czech suffered a disappointing defeat to unseeded Dayana Yastremska at the Dubai Tennis Championships and might arrive in Doha low on confidence as a consequence.

The Qatar Open has brought the best out of Victoria Azarenka in the past with the Belarusian winning the title in Doha twice before, but the former world number one has struggled for traction so far this year. While her run to the fourth round of the Australian Open was respectable, the straight sets defeat to Veronica Kudermetova in Dubai was a disappointing one.

Karolina Pliskova, Paula Badosa and Maria Sakkari could also be contenders at the Qatar Open will all three players comfortably sitting in the top 10 of the WTA rankings. 2021 Indian Wells winner Badosa has yet to pick up where she left off at the end of last year and so will be targeting a deep run here to get her season up and running.

In contrast, Madison Keys has been in exceptional form so far this season, making an unexpected run to the semi-finals of the Australian Open where she was stopped by eventual champion Barty. The American, who could be handed a wild card for the tournament in Doha on the back of her run at Melbourne Park, is a powerful baseline player when she finds her range.

While the Qatar Open is a prestigious WTA 1000 event in its own right, many will look at the tournament as a way to prepare for March when the great and good of the women’s game will pitch up in the United States for Indian Wells and the Miami Open. After that, the clay court season will arrive before the grass court season and Wimbledon is upon us.

2022’s schedule has eased many players into the new season, but the Qatar Open marks the start of a busy period that stretches all the way to July. Now is the time to find form. Now is the time to build momentum. Whoever wins in Doha, whether it’s Sabalenka, Swiatek, Halep or someone else, will be set up for a strong year.