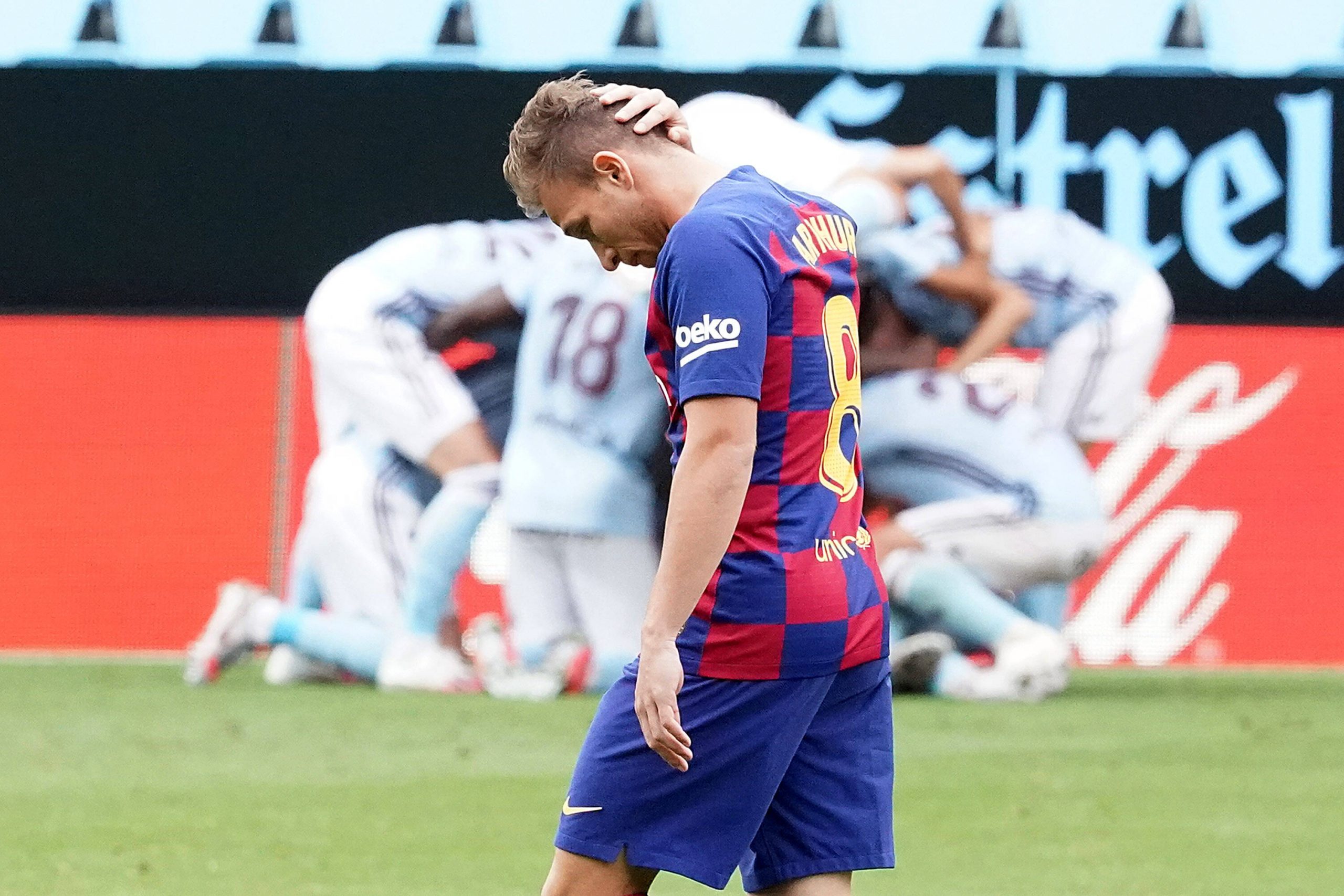 The most expensive transfer of the 2020 summer transfer window so far was completed on June 29 when Arthur Melo joined Juventus for an initial fee of €72 million plus €10 million in bonuses. Shortly after, the second most expensive deal of the year was finalised when Miralem Pjanić joined Barcelona for a sum of €60 million as well as €5 million in variables.

Neither team is a rookie when it comes to player-plus-cash swaps. Barcelona found themselves on the losing end of the trade in 2009 when they signed Zlatan Ibrahimović from Inter Milan. In exchange for the Swedish striker, the Blaugranas paid €46 million whilst sending Samuel Eto’o the other way. Zlatan failed to adapt to Pep Guardiola’s tiki-taka system and was sold a year later to Milan, with Barcelona accepting a €45 million loss on the forward. Eto’o, on the other hand, played a leading role for José Mourinho’s Inter as they clinched a historic European treble.

Under the leadership of Chief Football Officer Fabio Paratici, Juventus have made consistent use of swap deals. Last summer, they sold Leonardo Spinazzola to Roma for €29.5 million, with Luca Pellegrini heading the other way for €22 million. In addition, they purchased Danilo from Manchester City for €37 million, with João Cancelo joining City for €65 million.

Now, why didn’t City just pay €28 million difference for Cancelo and throw in Danilo as a gift on the side to Juventus? The key here is capital gains. Juventus paid €40.4 million the year prior to sign Cancelo from Valencia, whilst spreading out the fee across his five-year contract. As a result of the contract’s amortisation – the process of spreading a payment over multiple periods – Juventus were able to make a healthy profit on Cancelo, providing them with the requisite capital gains to allow them to steer clear of trouble with Financial Fair Play. It is the nature and necessity of these capital gains, or ‘plusvalenza’ as it’s known in Italy, that explains why Barcelona and Juventus were so eager to complete this deal before the transfer window opened on Wednesday.

The two teams had until Tuesday to register both deals on the balance sheet for the fiscal year, and they did just that, with Barcelona boosting their financial records by €12 million. After losing €154 million due to the pandemic, they needed a massive sale to escape financial wreckage, and they got it with the sale of Arthur to Juventus. Moreover, due to the fact that they have registered Pjanić on last year’s balance sheets, they now have far more freedom to pursue the likes of Lautaro Martínez and Eric García in the coming months.

Because Barcelona were able to spread the €30 million they paid Grêmio for Arthur across the length of his 6-year contract, it was possible to sell him when his total worth was €20 million, meaning that they will record a net profit of €52 million on the Brazilian midfielder. Juventus, on the other hand, signed Pjanić from Roma in July 2016 for €35 million, originally spreading the fee across his five-year contract. However, they extended his contract two years later until 2023, thereby stretching the cost even further and reducing amortisation fees. As such, Juventus recorded a plusvalenza of €47 million for the sale of Pjanić.

"If the transfer is confirmed, Pjanic will be happy, as he’s going to an extraordinary club like Barcelona." 💪 pic.twitter.com/DeaTMQ7As0

Barcelona’s sale of Arthur has plenty of similarities to Juventus’s sale of Cancelo. Neither player was their team’s most expendable asset; Arthur is one of the youngest players in Barcelona’s squad at 23, whilst Cancelo was coming off a moderately successful, if not hot and cold season under Massimiliano Allegri. However, both teams’ inability to shed the massive contracts of ageing stars such as Ivan Rakitić, Philippe Coutinho, Gonzalo Higuaín and Sami Khedira forced them to cash in on two players who had shown plenty of promise at a young age.

From the outset, however, it’s hard to see how Barcelona come out as winners in this deal, either in the short term or long term. Prior to the COVID-19 outbreak, Pjanić’s market value was €25 million, whilst Arthur’s market value was €55 million. Taking these numbers into account, Juventus made a gain of €30 million on the player value, and split the difference with a €12 million payment.

From a sporting perspective, Pjanić has taken a nosedive under Maurizio Sarri this season. While he had previously excelled in a deep-lying role under Allegri, he has struggled to fill the hole at the base of midfield in Sarri’s 4-3-3, a role previously occupied by Jorginho at Napoli and Chelsea, and Leandro Paredes at Empoli. While Arthur himself has played in a more advanced role both for Ernesto Valverde and Quique Setién, he’ll be expected to operate in a holding role between two interior midfielders, likely Rodrigo Bentancur and Blaise Matuidi.

It hasn’t been all roses for Arthur since he arrived in Catalunya in the summer of 2018. Similarly to several of his compatriots who have donned the Blaugrana, Arthur has made plenty of headlines for his off-the-field troubles. In February 2019, he travelled to Paris to attend Neymar’s birthday party, despite Barcelona facing Real Madrid two days later in the Copa del Rey Final; Arthur picked up a hamstring injury in the match. In December, he went to Andorra to snowboard, despite recovering from a pubalgia injury. When he returned from his winter vacations in Brazil, he was overweight and would miss even more matches due to injury.

After a successful start to life in Spain under Valverde, the Brazilian has struggled to stay consistent and influential on the pitch, oftentimes being hauled off around the 70th minute due to depleted energy levels. He will have an easier adaptation playing in a deeper role, however, in a league that typically plays at a lower intensity than La Liga. Sarri has built each of his teams under a midfield metronome at the base of a 4-3-3 and Arthur is currently the best suited player for this role in Juventus’s squad.

It remains to be seen whether Paratici will bring in another midfielder this window, but out of Aaron Ramsey, Adrien Rabiot, Bentancur, Khedira and Matuidi, the Grêmio product is the best man to handle the responsibility of Sarri’s regista role. Arthur struggled to live up to the “new Xavi” nickname upon his arrival at Barcelona, but he may just be able to become the “new Jorginho” in Turin.

OFFICIAL: Miralem Pjanic will join Barcelona at the end of the season after Arthur moved to Juventus 🔁 pic.twitter.com/f6tnTD2V4H

Whilst Barcelona made a slight economic profit from this deal, their biggest justification from a sporting perspective is the development of Riqui Puig. Whilst Puig made his first team debut against Cultural Leonesa on December 5, 2018, he has struggled for playing time under Setién and Valverde due to Arthur’s place in the first team – that is, up until now. Last week, Puig made back-to-back starts for the first time in his senior career, impressing against Celta Vigo and Atlético Madrid in a new-look 4-3-1-2 shape. Whereas Arthur would have normally been siphoning off game time from Puig in this advanced midfield role, there is now a gap for Puig to fill with Pjanić expected to provide rotation for Sergio Busquets in the holding role.

There are also several advantages Pjanić will provide that Arthur struggled to offer at Barcelona, primarily availability – the Bosnian has steered clear of injuries during his time at Italy. He is more reliable than Arthur when it comes to launching the press and winning the ball high up the pitch and he has proven more capable of filling in for Busquets or even liberating him for a more advanced role. Barcelona could use Pjanić to provide both competition and rotation in the holding position, sell him before his contract expires in 2024 and then hand over the keys to the defensive midfield position to Frenkie de Jong or another player in the academy such as Jandro Orellana, Oriol Busquets or Ludovit Reis.

However, like Busquets and De Jong, Pjanic’s best football comes when receiving the ball in front of the opponent, with time and space to dribble or pick out a pass. Barcelona, however, need a midfielder capable of moving vertically, receiving the ball between the opposition’s lines of pressure, driving into the final third and stretching the opponent’s backline. Puig and Arturo Vidal provide that, several La Masia midfielders such as Álex Collado, Ilaix Moriba and Monchu may be able to provide that in the future, but Pjanić will struggle to fulfil this responsibility.

All things considered, Juventus look set to emerge as the winners from this deal. They take a net loss of €12 million and cash in on a player on the wrong side of 30 who has failed to adapt to Sarri’s system, whilst receiving a 23-year-old midfielder who has the potential to become their long-term controller in the centre of the pitch. The Brazilian has the capacity to organise the first phase of build-up, orchestrate possession with simple, albeit smart, passing and release the likes of Ramsey and Bentancur in dangerous attacking positions. On the other hand, Barcelona are receiving a player who has been declining for the past year and whose position is already occupied by Busquets, one of the first names on the team sheet.

Only time will tell whether Barcelona or Juventus get the better end of the deal, but one thing is for certain: far more teams will attempt to replicate these audacious player swap deals as they look to cope with the ramifications of the COVID-19 economy.