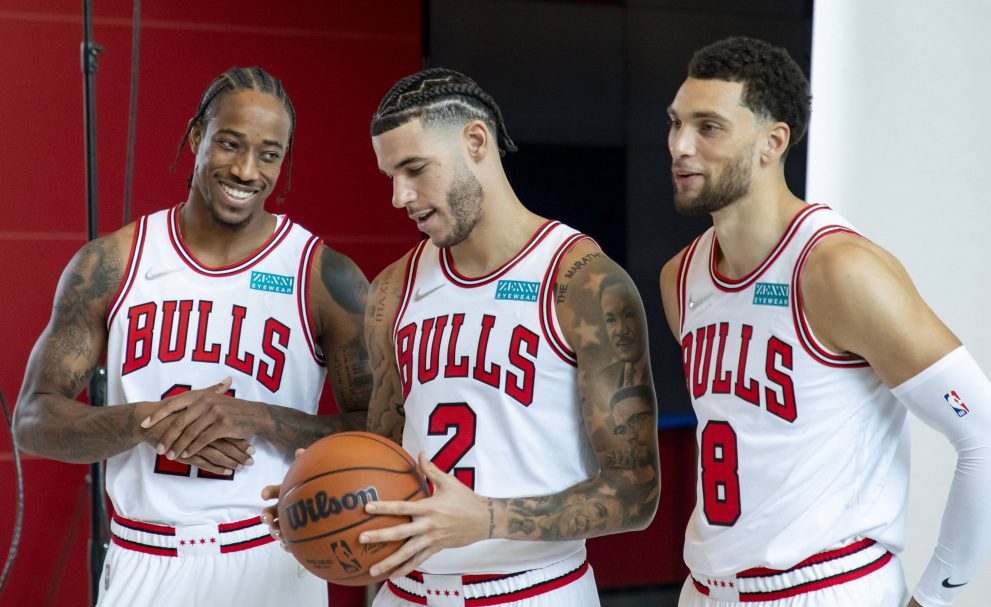 The Chicago Bulls and Miami Heat started this past offseason’s free agency off with a bang, quickly hammering out big-splash moves.

The immediacy of the two moves raised eyebrows, leading the league to conduct a thorough investigation into potential tampering.

After four months, the league levied down punishment on the Bulls and Raptors for reaching out to each player’s representatives before that was allowed by league rules. Although it doesn’t exactly qualify as tampering, the franchises conducted actions that were not permitted before the start of free agency.

The NBA will strip each team of their next available second-round picks as punishment, which is a minor slap on the wrist in comparison to the penalty they could have received. The franchises could have received up to a $10 million fine and suspension of front office executives.

This Lonzo Ball NBA tampering investigation was a complete joke.

All this build up only to lose a likely late 2nd Round Pick and the Bulls next available 2nd Round Pick won't be until 2026. No fines, suspensions or anything. Pelicans/Raptors get off without any punishment.

Instead, the league chose to go the less harsh route that gives off the impression each team avoided a stiff punishment. The NBA may have attempted to use each team as an example to sway other franchises away from that situation down the road.

The Bulls and Heat’s full cooperation likely helped lessen the blow, and it looks like the risk was well worth the reward. Each team has quickly found success with their big-splash free agency moves fitting perfectly into the fold.

Beyond that, the NBA’s inability to levy down significant punishment for these actions won’t do much in the way of swaying teams away from taking that risk moving forward. Seeing what the Bulls and Heat have accomplished with their key free-agent acquisitions will only make teams more aggressive in making prominent moves.

The league’s poor handling of the situation could only lend more to other franchises taking that inherent risk if it means landing a premier talent. The loss of a second-round pick is a low-cost punishment if a team acquires a significant piece to the puzzle.

Teams have shown the ability to add more second-round selections if necessary, as they are not as difficult for front offices to obtain. Yes, not every team will have the opportunity to land a game-changing talent, but if it means only losing a second-round pick, why wouldn’t a franchise take that risk?

Lonzo and Lowry both worth way more than a second-round pick, nice strategic moves by the Heat and Bulls.

Ball has brought significant stability to the Bulls’ backcourt, playing alongside All-Star guard Zach LaVine, as the two have worked smoothly together. The UCLA product has fit into the system like a glove as he’s been a major factor on both ends of the floor.

Ball’s numbers are a little lower than last season, averaging 12.7 points and 5.0 assists per game, but he’s shooting a career-high 42.7% from 3-point range on 7.1 attempts per contest. The 24-year-old is currently the only player in the league with 100-plus rebounds, 100-plus assists, 40-plus steals, and 20-plus blocks.

He’s accomplishing it all on the court while the Bulls are paying dividends in the standings, currently holding a 17-10 record, trailing the Brooklyn Nets by two games for the top record in the Eastern Conference.

Ball is loving his new NBA home, where he has the Bulls in a promising spot.

“I think everything happens for a reason. I’m where I’m supposed to be now,” Ball said via K.C. Johnson of NBC Sports. “It feels great.

“Obviously, the coaches wanted me here. My teammates, we all have great relationships. For me, I wanted to come to a place where I felt like I fit, a place that wanted me for me and didn’t want me to change. Chicago is the best place for me.”

Although the Heat are a little behind in the standings, with a 16-11 record, Lowry has been an ideal fit. The star point guard quickly bought into the system and the established culture in Miami behind the tremendous stability he brings on both ends of the floor.

Lowry’s offensive production is not appealing to the eye with 13.3 points and 7.8 assists per contest. However, he didn’t join a team where he’s expected to be a primary offensive option as he ranks behind Jimmy Butler, Bam Adebayo, and even Tyler Herro.

Lowry has put his ego aside to play a bigger part of the puzzle to help push the franchise toward contending for an NBA title. He has strong immediate chemistry with his teammates that have allowed him to become a highly effective passer. His shooting numbers at 42.4% from the floor and 31.2% from beyond the arc are well below his usual spot, but it’s something that will only improve as the season rolls along.

The bigger picture is that he’s fit into the mold where he is a highly dependable factor. What has been quite telling is how highly his teammates speak of him as they have loved playing alongside him.

“I love playing with Kyle,” Herro said via Sky Sports. “My first two years in the league I didn’t really have a point guard that could get everyone organized to their spots. That’s no knock on my previous teammates. It’s just the way that Kyle gets everyone to their spots, how he’s a leader. He just understands the game in a way that not many people do.

“Just being next to him is obviously amazing for me.”

Herro has certainly benefited from playing alongside Lowry, as he’s putting together a career-best campaign in his third year. Beyond his work ethic pushing him to improve as a scorer, he’s excelled as an offensive option working off the veteran point guard.

He’s leading the early Sixth Man of the Year conversation, averaging a career-high 20.8 points per contest, which leads all reserves this season. Herro recently became the second-youngest player in Heat history behind Michael Beasley to reach 2,000 career points.

The rest of the league, especially the smaller-market teams, can look at the success that the Heat and Bulls have had with their offseason additions. Losing a draft pick or receiving a hefty fine is tough, but it certainly doesn’t outweigh adding a game-changing talent. These opportunities are worth the risk more so if the NBA isn’t going to levy down any significant punishment.

In other words, what has the league done to really sway teams away from taking the risk that the Bulls and Heat did? They have already reaped the benefits from their actions that only cost them a lowly second-round selection. If anything, it has provided other teams with the motivation to go that route without any hesitation, especially if they fully cooperate with the league in any investigation.

Granted, it’s still extremely early in the 2021-22 season, but it certainly looks like both teams are in the spot of pushing toward a promising future. Their respective front offices have structured teams that will be in the picture to make a deep playoff run next April.

The more sustained success the Bulls and Heat find with their offseason acquisitions, the more it will push other teams to take that chance in free agency. It’s a blueprint that has worked for years, and the league now chose to go the route of a punishment.

On top of that, the loss of a second-round selection isn’t enough to scare front offices away from testing the limits to land a game-changing talent.

It’s a formula that doesn’t always equate to success, but Chicago and Miami are certainly not regretting taking that chance last offseason. The NBA’s misstep in handling the situation may only backfire and open the door to more teams risking the loss of a second-round draft or fine to add premium talent. 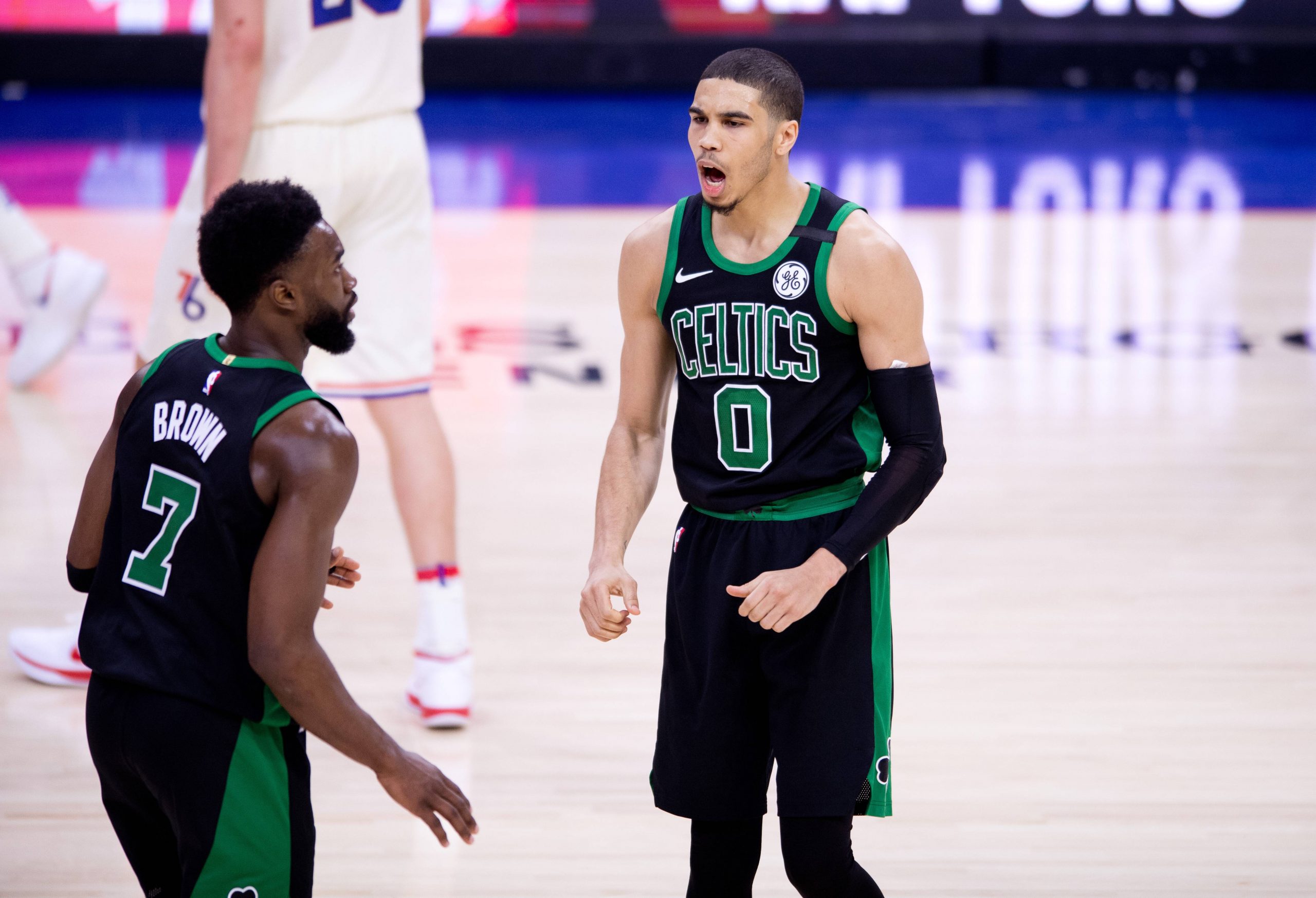 Jayson Tatum and Jaylen Brown Are Not Meshing, and It’s Time for the Celtics To Trade One of Them