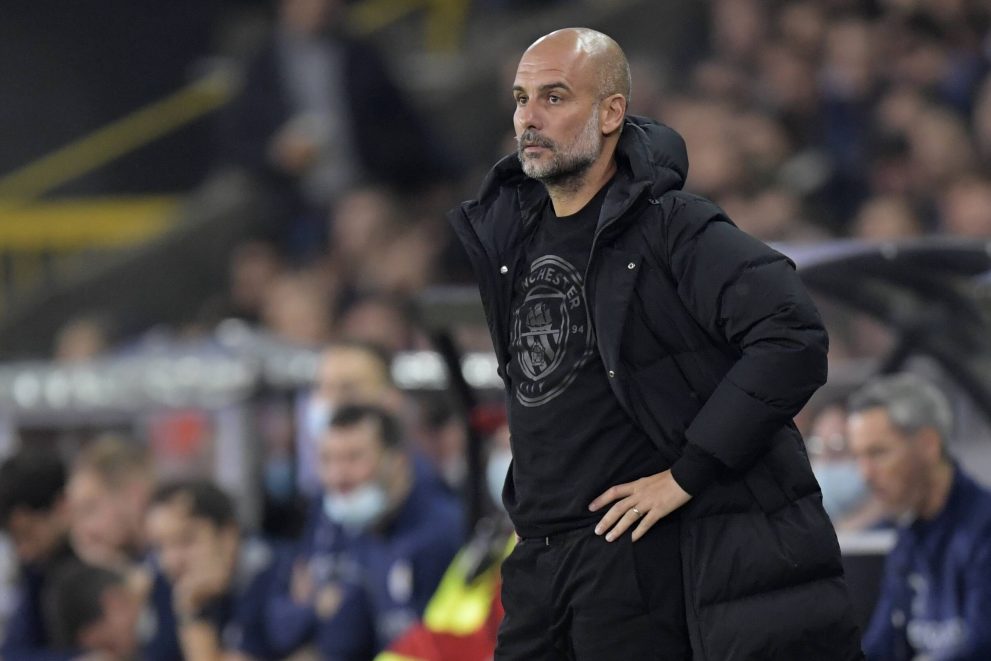 It is not only on the pitch where Manchester City have led the way in recent times. Off it, theirs is a business model that is lightyears ahead of many of their rivals with an innovative infrastructure and blueprint for success that has seen them referred to by industry insiders as “the beast”, as reported by the Independent.

From the top down there is a clear chain of command with everyone singing from the same hymn sheet while their recruitment is meticulous, leaving little to chance. This is in stark contrast to the more scattergun and reactive approach of others. In commercial terms meanwhile, it was revealed earlier this month that City had posted record revenues, bringing in more income than their illustrious neighbours United for the first time.

Naturally — perhaps even inevitably — being such a well-run club has had a fundamental and direct effect on their results every Saturday, and ultimately led to silverware, and acknowledging that brings us to an interesting hypothesis.

At present, there is a feeling prevalent among supporters of Manchester United, Liverpool and – to a much lesser extent – Chelsea, that it is becoming increasingly difficult to compete with the Blues.  The Citizens are furnished with one of the world’s pre-eminent coaches, a squad that steamrolls all before them and have won the league title in three of the last four years, averaging 91 points in doing so. They are currently on course to secure another crown in May.

Odds on Manchester City winning the title in 2021/22 are too slim to consider. They are however a tempting 11/4 with Bet365 to end their Champions League hoodoo this term.

Doesn’t it seem entirely logical therefore that if the Blues cannot be bettered on the pitch, they can at least be matched off it, by ‘appropriating’ the methods that have facilitated their supremacy? Manchester United’s business model has brought only chaos and decline in the modern era, while even Liverpool – whose largely successful but still flawed MO – could benefit from identifying City’s formula for success and essentially copying it.

If that sounds overly simplistic, that’s because it is, but as the age-old axiom goes: if you can’t beat them, join them.

Let’s start with United, a giant that has unquestionably lost its footing during City’s rise to prominence. What can they learn from the set-up and operating procedures long put in place down the road?

Paul Hirst covers both Manchester clubs for The Times and he believes what most divides the respective behemoths beyond their output on the pitch is their contrasting abilities to stick with an objective.

“City have had a plan for the last ten years and that was to build a team for Pep Guardiola further down the line. They knew that he would come to City so they installed a plan that would suit him when he arrived as manager. They bought players that complimented his style of play and put in place a system throughout the club that was in his image. From the first team right down to the under 10s every side plays 4-3-3 and what this means is that when a player like Phil Foden comes through, he has been playing 4-3-3 for eight or more years. He is comfortable on the left or the right or as a number eight. Everything is geared towards success at a first team level from a very early age.”

It was a process that began in earnest close to a decade ago with the recruitment of Director of Football Txiki Begiristain and SEO Ferran Soriano. Both are former Barcelona charges who were pivotal in transforming the Catalan club into continental conquerors. The masterplan then took a quantum leap in 2014 when City’s £200m training centre was officially opened, a complex that is widely considered the finest of its type that crucially incorporates the junior and youth set-up.

In both recruitment of key personnel and in infrastructure, Manchester City have held an unwavering vision and in essence, Pep Guardiola was the final piece in the jigsaw.  This leads us to ponder: do their closest rivals – in proximity at least – even have a jigsaw at present? Hirst is damning in his assessments.

“City have had continuity and familiarity and there is a vast difference between that and United who are on their fifth manager now in nine years, who have all had different ways of playing. Moyes concentrated on being solid at the back. With Van Gaal it was all about possession across the pitch but with no urgency to it. Ole wanted lightning quick counter attacks. So that is a real mish-mash and all those managers bought players who suited their systems.

The upshot of that is you have Nemanja Matic who was bought to be a sitter in a really solid Mourinho team now playing for a manager who wants his team rapid on the counter-attack, who wants quick ball transitions. That’s why it hasn’t worked for United these past few years. They have all these players being dragged from one philosophy to the next.”

The consequences of flip-flopping between methodologies has been plain to see in recent seasons with United’s average league placing post-Ferguson dropping to a barely credible fifth. City meanwhile have consistently sought players that neatly fit their ethos, as evidenced by the signing of centre-backs who are comfortable on the ball and full-backs who are creative and dynamic.

Of course, Guardiola’s coaching acumen is a significant factor in City’s dominance over the Red Devils. But what also explains it is one club sticking to a unified plan, while the other reacts differently each time they are faced with a crisis.

One of the world's best full-backs… 🔥📈 #MCFC pic.twitter.com/rZyHZj6PWB

Paul Haywood, it could be said, is the Manchester City of journalists having won the British Sports Writer of the Year award on five occasions. Like his colleague, he is highly effusive about how the reigning champions are run and much less so of United’s imprecise stratagem.

“Man City have a level of consistency, identity, purpose, management, organisation and structure that Manchester United certainly don’t have. What Manchester United need to do is finally stop treating the club as a deal-making factory with a football team attached, in other words, a massive corporate branding operation that just happens to be in the football trade.

They need to be ruthless and cull a lot of players who aren’t contributing and haven’t for some time. If that means losses in the transfer market, so be it. They have to get the structure right around the first team; the first team has to be everything from now on and there are still question marks about whether John Murtough and Darren Fletcher are over-lapping on the recruitment and technical sides. Most of all, they have to find a manager who must decide what the identity of the club now is post-Ferguson and finally give it a consistent direction.”

If that is a long and exacting to-do list for United to contemplate what of Liverpool, arguably the only side to directly trouble City on the pitch in recent seasons. As previously stated, theirs is a model that varies greatly from City’s but it’s one that works just fine for them. Yet there are areas that demand improvement, namely a failure to commit, which allows star players to run down their contracts. Barring the very odd exception, such as Leroy Sane’s switch to Bayern in the summer of 2020, City typically don’t stand for that.

So what additional steps are necessary from the Reds if they are to close the gap on a title-winning machine? Haywood insists Klopp is key, as is some good old-fashioned acuity.

“It mainly consists of keeping Klopp and making him a dynasty manager who gets embedded in the club and never wants to leave. That is unlikely because other jobs will appeal to him at some point. There is also squad improvement that must be made but the owners won’t – or can’t – compete with a nation-state in Man City and a Russian oligarch at Chelsea. So, it comes down to Liverpool making better and smarter decisions than Man City and Pep Guardiola and that’s not easy.”

Mo Salah's Liverpool future is out of his hands 👀 pic.twitter.com/tOziQYZX8S

These smarter decisions cover two related facets – transfers and their management of the existing squad. Regarding the former, their signing last month of Luis Diaz from Porto for a fee in the region of £40m was an encouraging development, with the Colombian winger adding further firepower to an already formidable front-line. Yet there are some who claim his arrival anticipates the departure of Sadio Mane, whose contract runs down next year, and with the futures of Roberto Firmino and Mo Salah also hanging in the air, questions must be asked of an elite club that allows their three brightest stars to run their contracts down to the wire.

Salah’s situation particularly perplexes as here is a player structurally integral to Klopp and Liverpool’s success potentially leaving Merseyside as a free agent. Concerning the negotiations, Haywood believes the club have now placed themselves between a rock and a hard place.

“I’d love to know what Salah is asking for. If it’s £400,000 a week let’s say, then that’s too much for a player of his age though it would be incredibly painful to lose him, given he is one of only a handful of weekly game-changers in Europe – those players have a special premium. But at the same time the club can’t compromise their wage structure. There has to be a ceiling and if they go above that Liverpool will be undermining what they do and who they are.

From the outside looking in it appears to be a catch-22 that could have been avoided via more affirmative action, undertaken much earlier and here we can directly compare to Manchester City and their template for such matters. Last week saw Joao Cancelo sign an improved deal that keeps one of the Premier League’s best performers this past year at the Etihad until 2027. Bernardo Silva meanwhile is set to put pen to paper on a contract extension, ending speculation of a desire to move abroad. Haywood is rightly critical of the Reds’ equivocation that pales to their rivals’ decisiveness.

“FSG do a lot of good things but letting contracts run down is one of the weaknesses of their business model. They should be better at that.”

Better, or more like City? Right now, in an era of dominance for the Cityzens, that often equates to the same thing.