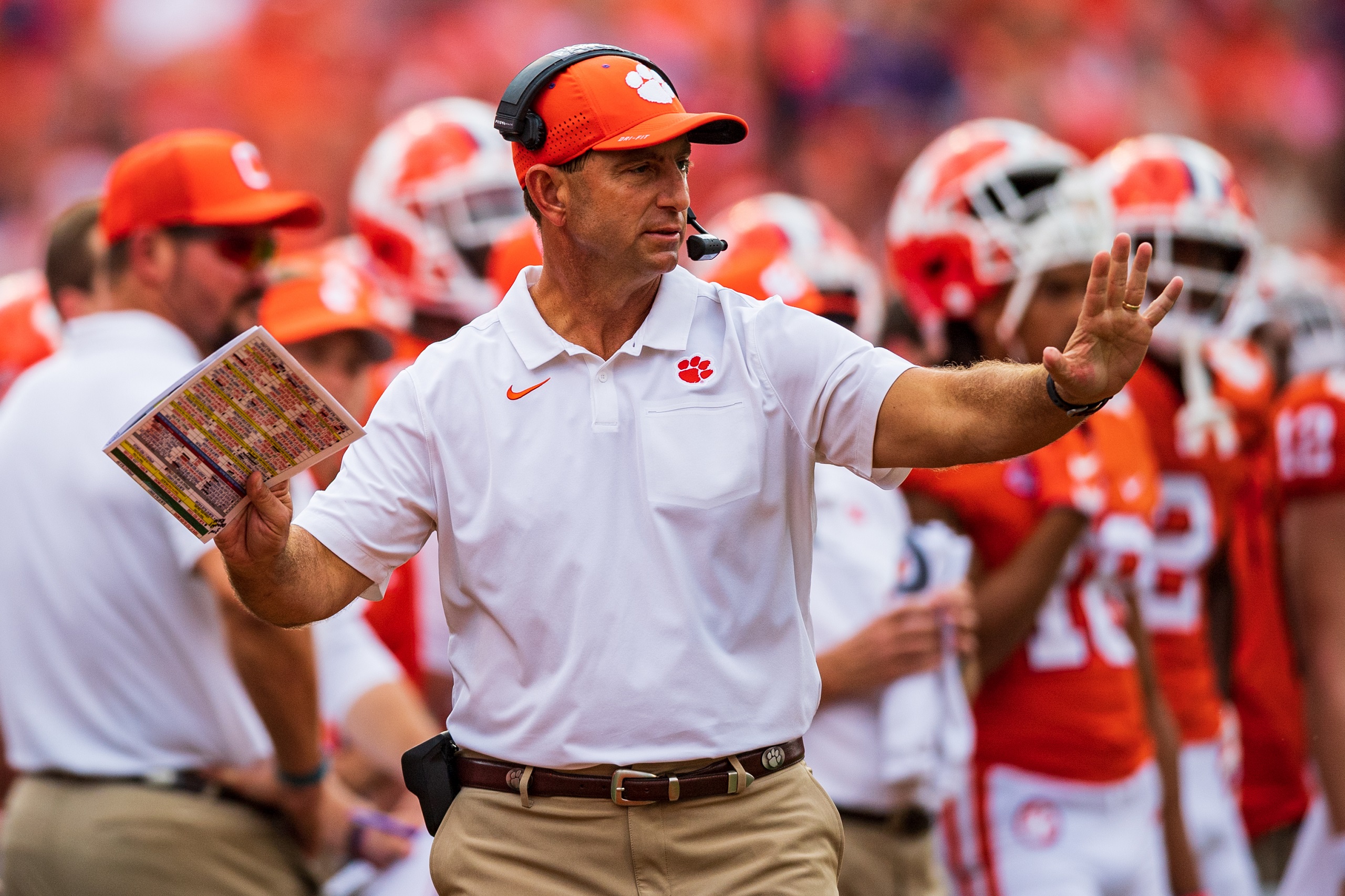 It’s simple. College football coaches are not big on first-week elimination games.  The TV money is big and the national audience is good for recruiting, but job security is bigger.

No. 3 Clemson is a 3-point favorite over the No. 5 Bulldogs in the regular-season opener for both on Saturday night in the Duke’s Mayo Classic at the neutral Bank of America Stadium in Charlotte, N.C.

Openers with this much sizzle are rare.

The winner will have a clear path at a run to the CFP playoff given their relatively soft schedules. ACC Clemson misses North Carolina and plays Florida State at home. SEC Georgia misses Alabama and LSU and plays Florida at a neutral site.

Only twice in the previous 20 seasons have two schools ranked in the top five of the preseason AP poll met on the first big weekend of the season, and both involved SEC schools.

Alabama used its 2017 victory as a springboard to the CFP national championship. The Crimson Tide (13-1) survived a loss to Auburn in the Iron Bowl to qualify for the playoff as the No. 4 seed, then beat both Clemson and Georgia for the title. A season-opening loss to the Seminoles would have been devastating.

The 2011 LSU team moved to the top of the AP poll in the fifth week of the season and was undefeated when it reached the BCS national championship game, where Alabama avenged a 9-6 regular-season defeat with a 21-0 victory. Oregon (12-2) lost only one other game; had the Ducks beaten LSU, it could have been them playing for the national title.

Clemson and Georgia have done this before.

The No. 8 Tigers edged No. 5 Georgia 38-35 in the opening week of the 2013 season, although neither factored in the national championship picture.

The No. 8 Bulldogs beat unranked Clemson 31-28 in the first week of the 2002 season. It was a good win, but the Bulldogs (13-1) could never overtake Miami, Fla. or Ohio State in the polls. Both finished the regular season undefeated before the Buckeyes beat Miami 31-24 in two overtimes in an epic Fiesta Bowl.

AN EARLY LOOK AT CLEMSON

All quarterback D.J. Uiagalelei did in the two starts Lawrence missed because of COVID issues was pass for 781 yards and four touchdowns and rush for two more scores. He had 439 yards passing in a 47-40 loss to Notre Dame after passing for 342 yards to help the Tigers overcome an 18-point deficit in a 34-28 victory over Boston College in his first career start as a true freshman.

Etienne, the Tigers’ leading career rusher, will be replaced by Lyn-J Dixon, and NFL talent Justyn Ross will step in at wide receiver to mitigate the loss of two NFL draftees. Ross sat out last season because of a spinal cord injury that required surgery after recording 112 receptions with 1,865 and 17 touchdowns in the previous two seasons.

Clemson has seven defensive starters back on a team that tied for FBS lead in sacks (46) and led the ACC in total defense (326.8 yards per game) in 2020. The Achilles heel is a secondary that gave up 214.2 passing yards a game. All four starters return.

AN EARLY LOOK AT GEORGIA

The Bulldogs had an offensive renaissance when transfer quarterback JT Daniels was cleared to play in the seventh game of the 2020 season after suffering a knee injury at USC in the first game of 2019.

Daniels completed 80-of-119 passes for 1,231 yards, 10 touchdowns and two interceptions in his four starts, leading the Bulldogs on a season-ending four-game winning streak that included a 24-21 victory over Cincinnati in the Peach Bowl.

Only Trevor Lawrence and Justin Fields were considered better quarterback prospects than Daniels in the recruiting class of 2018.

Georgia was 12th in the FBS in total defense last season (321.0 yards a game) but was even more porous in the secondary than Clemson, giving up 248.7 passing yards a game.

Cover corners Eric Stokes (first round, Green Bay) and Tyson Campbell (second round, Jacksonville) were high NFL draft picks, and their replacements are talented but unproven.

Anyone else been eyeing that Week 1 Georgia-Clemson game?

Clemson won and covered both times it has been favored by four points or less since 2017, beating Louisville 47-21 laying three points in 2017 and beating Ohio State 29-24 laying 2.5 in the first round of the 2019 CFP playoffs.

Georgia is coming off an 8-2 season in which it was 4-6 ATS, 2-2 with Daniels at quarterback. The Bulldogs were a dog once last year and failed to cover a six-point number in a 41-24 loss to Alabama.

Georgia was 12-2, 8-6 ATS in 2019, again failing to cover in the only game it was an underdog, a 37-10 loss to LSU getting seven points. The ‘Dogs have not covered as a single-digit underdog since beating Notre Dame 20-19 while getting five points in the second game of the 2017 season.