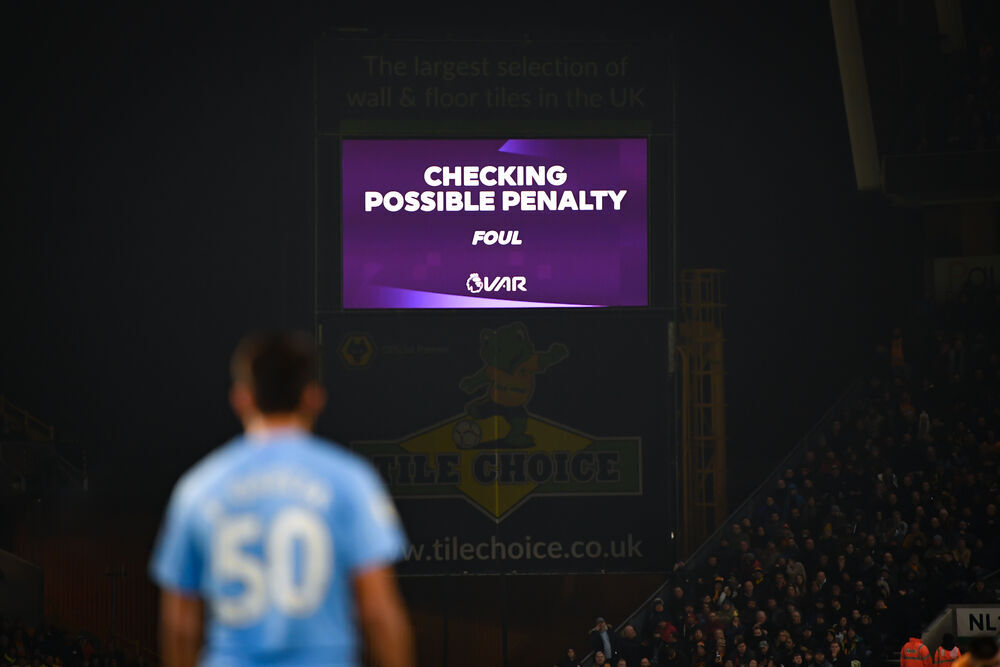 If there’s one aspect of the Premier League over the last couple of seasons that everyone can agree has performed well below par, it was the advent of the video assistant referee (VAR).

Considering just how long supporters and stakeholders had been clamouring for the use of technology, when it eventually came in, the least that might’ve been expected was that it was used correctly and in the manner which it was intended by its creators.

The Premier League are set to change VAR rules for the new season, meaning players will no longer win ‘soft penalties’ for minimum contact. pic.twitter.com/DaV7ftplDV

However, Professional Game Match Officials Limited (PGMOL), the governing body for referees, still haven’t got it right after two years of using it.

Former FIFA referee and PGMOL chief, Keith Hackett, worked with various parties to ensure the seamless transition of goal-line technology and had the initial conversations surrounding VAR before leaving his position and being replaced by Mike Riley.

Hackett remains incredulous at how poorly managed things have been since.

“Over the last two years, football’s stakeholders, from fans, players, managers and even CEO’s, such as West Ham’s Karren Brady, have been the most vocal,” he told Compare.bet.

“They have condemned the way VAR has been operated in the Premier League. Brady even said that the standard of refereeing was well below what should be expected. Lazy refereeing and overzealous VAR operators were at the root of the problems.

“In year one, Riley, the MD [managing director] of PGMOL stated that the pitchside monitor would be used sparingly. He delivered on that promise, going against the published VAR protocol for referees in the Premier League on many occasions.”

Therein appears to lie a large part of the problem.

It isn’t necessarily the technology that is at fault, it is the application of it. It worked perfectly well in the European Championship when the head of referees, Roberto Rosetti, allowed his officials to effectively get on with it for example.

VAR would only come in when it was absolutely necessary, and that’s the major bugbear for managers and players in the Premier League.

It’s almost as if those at Stockley Park are trying to re-referee the match, which is sending the game down a very slippery slope indeed.

“What we witnessed with offside decisions was a disaster, with over thirty calls that ruled out goals,” Hackett continued.

“Toe, armpit and hairline offside decisions operating on camera speeds of 50 frames per second, frankly, started the call by fans to question the integrity of the officials.

“Our top referees were made to look foolish and the blame for this rests firmly at the feet of Mike Riley who has been at the forefront of managing the decline in standards.”

Used correctly, the vast majority of those who have an interest in the beautiful game would be more than happy to have VAR operating in the background and only coming in when there has been a ‘clear and obvious’ error.

As it stands, many believe it’s a blight on the English game.

Without dissecting individual incidents, there have been some high-profile matches where goals haven’t stood or offsides have been given for the most minuscule of infractions.

It really has sucked all of the enjoyment out of watching a match, and with supporters now about to come back to stadiums in their droves, that has got to change.

“The standard of refereeing in the English top-flight, in the Football League, and lower down is on the decline,” ex-Premier League official, Mark Halsey, told Compare.bet.

“The leadership and direction from PGMOL management is the problem. When do you see a referee go out and enjoy themselves nowadays and smile along with the players? You can referee with common sense.

“Michael Oliver is by far our best referee, with Anthony Taylor also having gone to the Euros with him.

“Late last season we had one incident where Anthony had a good view of a foul on Jamie Vardy in the Leicester game but gave nothing. That’s precisely when VAR should come in, because the on-pitch official has made a clear and obvious error.

Been saying for ages … contact does not necessarily = foul.
Otherwise, why is it a contact sport? Some welcome adjustments – including on offside & more limited VAR usage – that I hope (with the right operation) restore some sanity to our game. https://t.co/5Lr1YOs10p

“Look at Mike Dean. A very experienced referee, he’s made a few mistakes recently and you have to ask the question as to whether some officials are going on too long.

“Some referees need a bit of loving, some need a kick up the backside, just like in a dressing room.

“It’s a confidence issue with a lot of the referees and it’s also down to a lack of coaching. Can you believe that the coaches they have now have never refereed at the top level before?!”

We haven’t yet, fortunately, had a situation whereby a title win or some such has rested on the outcome of a VAR call, but that precise scenario isn’t all that far away if things continue along the same path.

Sooner or later the game will reach a tipping point, but it doesn’t have to.

“VAR was so, so inconsistent last season. I think it has left everybody confused and the officials need to have a lot more training and education,” Halsey added.

“We’ve been going on about this now for a couple of seasons. It’s a dedicated profession. You need to have your active referees, and those referees that have retired should go to work at Stockley Park.

“We’ve got an abundance of top-quality officials that have retired over the last few years that can help. Lee Probert and Roger East retired at the end of the season before last and they weren’t wanted.”

The hire of those named above, and others renowned for their work as officials in the Select Group, would at least give everyone involved with the game in England some confidence that things were being done properly.

Such bloody-mindedness from the top at PGMOL only hurts them as an organisation, and their officials, in the longer term.

“Well, it’s a new season and promises are once again being spouted out of the mouth of someone who should have been fired a few years ago,” Hackett continued.

“Yes, Riley is under huge pressure from clubs now, particularly after the way that the referees did a superb job at the Euros. He has now clearly been ordered to change.

“Thicker lines on offside calls are something that the Dutch have operated for two seasons, and which was adopted by UEFA, but will only now be introduced into the VAR operation by the Premier League.

⛔️🙋‍♂️ With the reported changes to #VAR coming into play next season, hopefully we won't have to see any more goals ruled out for offside like this… pic.twitter.com/qJQN8RsuFs

“Referees have been advised to be less forensic about penalty-kick decisions, highlighting that not every contact in football is an offence. So, we might just see some improvement, but don’t hold your breath!

“Remember ‘Mr Calamity,’ the retired Premier League referee, Lee Mason, will be sitting at Stockley Park with his feet up watching the game, and when appropriate causing confusion with his VAR calls.”

Indeed, the appointment of Mason to the VAR group is an interesting one.

No longer considered good enough to officiate at the highest level, because of the remarkable number of mistakes made, Mike Riley has decided that Mason is the perfect man for the job at Stockley Park.

It would be laughable if it wasn’t so serious, with Mark Halsey also incredibly unhappy at that particular appointment.

“Lee Mason retired at the end of the season, and they’ve made him a dedicated VAR official, but he hasn’t done a VAR for months? Why haven’t PGMOL used him? His last VAR appointment was the Tomas Soucek fiasco when he recommended a review to Mike Dean.

“It was for an act of violent conduct, and it was never that. He’s not done a VAR since that game. Why has PGMOL not given him the training and education that he needs?

“Personally, I don’t think we’re going to see any benefits until there are wholesale changes to the PGMOL structure. We are suffering massively.”

With the season about to kick off, it’s not really what football supporters up and down the country will want to hear.

What’s strange about the entire refereeing situation is that Riley appears to have carte blanche to do as he sees fit.

Can you remember the last time he was hauled in front of the game’s stakeholders to explain why so many decisions that were reached by VAR were incorrect?

Explanation would be great, especially on subjective decisions. Why it’s given under law, and when needed, why it was an error to do so. The wall of silence helps no one.

Why hasn’t he had to explain his reasoning behind the decision to not have officials going to the pitch-side monitor to look at each infraction if the error was ‘clear and obvious’, as was the requirement?

Frankly, if the status quo is allowed to continue, then the supposed best league in the world will be ridiculed because of the inability of its officials to adopt simple processes.

We are already at the stage where there is no more margin for error.

Perhaps the changes that are coming in this season will ensure that the football isn’t so stop-start and will therefore be even more enjoyable as a result.