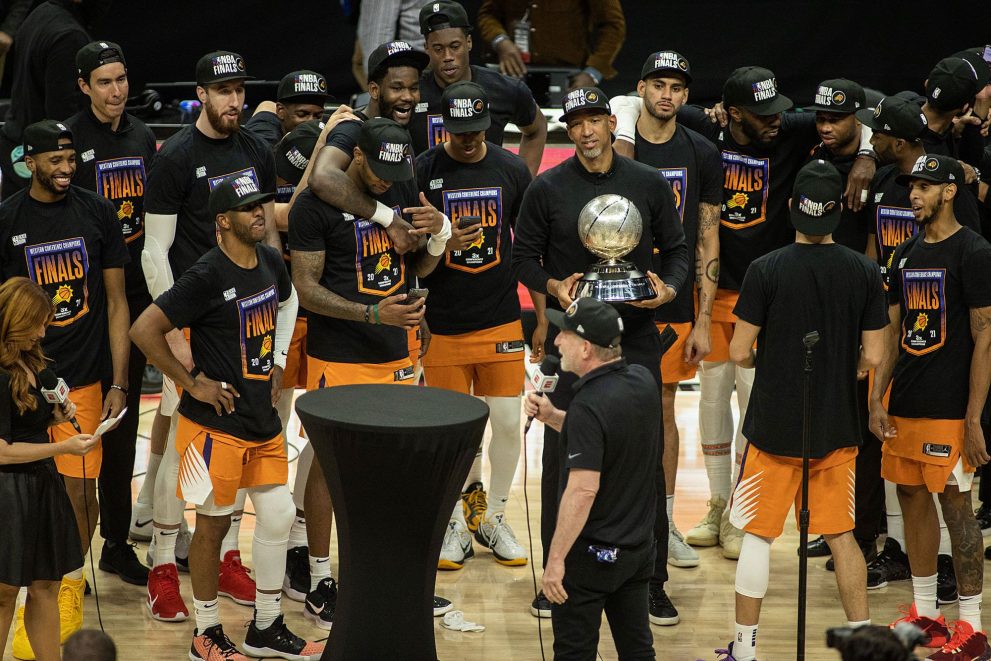 The bomb, of course, being ESPN’s exhaustive investigative piece into Suns owner Robert Sarver by NBA reporter Baxter Holmes. The story accused Sarver of creating a hostile and toxic workplace in which he made racist and misogynistic comments and often acted in a wildly inappropriate manner.

There are allegations of Sarver using the N-word, of bragging about his sexual exploits, of pantsing a Suns’ male employee, of treating female employees like possessions, etc. etc. etc. It’s a sordid tale and, if true, Sarver should be forced to sell the team and, hopefully, never be heard from again.

On NBA Today, @Baxter reports on the Suns’ culture under Robert Sarver based on over 70 interviews with current and former employees. pic.twitter.com/W9dEWikyLH

We’ll delve into the allegations in a moment but, first, there’s something you should know about the reporting process for stories of this nature. Reputable news organizations like ESPN understand that if they get their facts wrong or allegations can be disproven they not only lose credibility they likely will be sued for libel.

The Suns all but signalled those intentions when, in a proactive gesture, they released several statements refuting ESPN’s story two weeks before it was published. Consider this wording in the statement from Suns Legacy Partners, LLC:

“Documentary evidence in our possession and eyewitness accounts directly contradict the reporter’s accusations.”

And this, from Sarver:

“I can certainly tell you that some of the claims I find completely repugnant to my nature and to the character of the Suns/Mercury workplace and I can tell you they never, ever happened.”

In other words: If you write this, ESPN, lawyers will be involved.

ESPN surely knew this. That’s why, barring journalistic malfeasance of the highest order, it wouldn’t publish the racist and misogynistic allegations in the piece without A) checking and re-checking to make sure everything is accurate; B) having multiple sources to corroborate the allegations; and C) having its attorneys sign off on the article before it was published.

Getting multiple sources for each allegation is particularly important. Here’s why:

Former Suns coach Earl Watson was fired three games into the 2017-2018 season. As ESPN reported in the story, Watson was fired because Sarver told him to sever ties with the agency that represented him, Klutch Sports Group, because it also represented disgruntled point guard Eric Bledsoe. Sarver was incensed by a comment Bledsoe’s agent, Klutch Sports Group agent Rich Paul, had made about him.

This is taken directly from the ESPN story:

Watson said he told Sarver that he wasn’t going to fire Klutch.

“You can do whatever you want,” Watson said he told Sarver. “You own this team, but my culture is not for sale. And I’m not for sale.”

Given the toxic nature of their relationship, any legitimate reporter would wonder if Watson had an axe to grind. The same could be said of any of the anonymous sources who came forward with allegations about Sarver’s behaviour.

It’s instructive, then, that Holmes talked to more than 70 current and former Suns employees. And the breadth of his sources lends credibility to the story. Holmes quotes a current co-owner, a former coach, former players, two former human resources employees, a former Suns executive, a current business operations employee and others.

It’s hard to imagine all of them lying to ESPN because they don’t like Sarver.

In 2018, I sat with Earl Watson and he revealed the ultimatum he was given to keep his job with the Phoenix Suns. @Baxter goes into great detail on that situation and the toxic, racist work environment created by owner Robert Sarver. https://t.co/EMkuic0a5w pic.twitter.com/gC29jFZYPI

As for the allegations:

No one who’s followed the Suns since Sarver became owner in 2004 will be surprised that he’s an overbearing, meddling and profane owner who would often angrily burst into the coaches’ office after a game and tell the coaches what they were getting wrong. Sarver’s reputation around the NBA during Phoenix’s 11-year playoff drought was that of a smart businessman who was doing some very dumb things as an owner. This included thinking he knew more about the game than the general managers, coaches and players he employed.

I covered the Suns as a columnist for the East Valley Tribune from 2004 to 2009 and then again as the beat writer for the Arizona Republic for the 2017-2018 season. I heard multiple stories of Sarver treating his employees poorly, contradicting the family atmosphere the Suns like to present.

What’s stunning, however, are the allegations involving racist and misogynistic comments. From Baxter’s piece:

“Sarver once used the N-word when trying to explain to a staffer why he preferred hiring Lindsey Hunter over Dan Majerle as head coach in 2013, according to a high-level executive who heard the remark. Hunter was a first-year Suns player development coordinator while Majerle was in his fifth year as a Suns associate head coach.”

“These (N-words) need a (N-word),” Sarver told the staffer of his largely black team, according to the executive.

The story contains other allegations of racist remarks and Holmes writes, “At least a half-dozen Suns staffers recounted to ESPN instances of Sarver hearing a story from a Black player and then using the same language when re-telling it, down to the usage of the N-word.”

The ESPN article also portrayed Sarver as an owner who created a toxic workplace for female employees, with one former female staffer saying, “women have little value. Women are possessions.”

More than a dozen employees told ESPN Sarver made lewd comments in meetings, including telling staffers about his wife performing oral sex on him and that he needed to wear extra-large condoms. Sarver denied saying those things. What he didn’t deny is that he once passed around in a meeting a picture of his wife in a bikini.

Sarver’s explanation:  A retailer sent he and his wife a sample of NBA branded swimwear and he took a picture of his wife in the bikini to show his merchandise people what the swimsuit looked like.

Who does that, other than an immature fool with no sense of how such behaviour might be received by female employees?

Sarver’s forceful denials of much of what Holmes reported – he issued another statement Thursday saying he has never used the N-word – are enough to give one pause before calling for his removal as owner. Sarver also said he would welcome an NBA investigation, and the league announced that its investigation will begin immediately.

Good. Let’s get to the truth. And let’s hope the NBA doesn’t try to hide the findings of its probe as the NFL has done with the Washington Football Team and owner Daniel Snyder.

Either we’ll find out that Holmes’ story is accurate, and Sarver should be forced to sell the team, or ESPN’s reporting was inaccurate and the network will owe Sarver not only a public apology and retraction, but millions of dollars in an inevitable libel lawsuit.

The NBA has launched an investigation into Suns managing partner Robert Sarver after allegations of toxic workplace culture, including misogyny and his use of racist language and slurs. pic.twitter.com/ayCx8KRxa8

I’ll leave you with this: Of all the words written Thursday, this, in my mind was the most telling. It’s a statement from Suns vice-chairman Jahm Najafi.

“I have been made aware of the allegations against Robert Sarver, the managing partner who runs the Phoenix Suns,” Najafi wrote. “The conduct he is alleged to have committed has stunned and saddened me and is unacceptable … My sincerest sympathy goes out to all whose lives and professions have been impacted … Although today’s revelations fall under the jurisdiction of the League which decides and takes any action based on its finding, I offer my support to ensure there is full accountability.”

Not a single word in Sarver’s defense from a Suns co-owner.

What does that tell you?