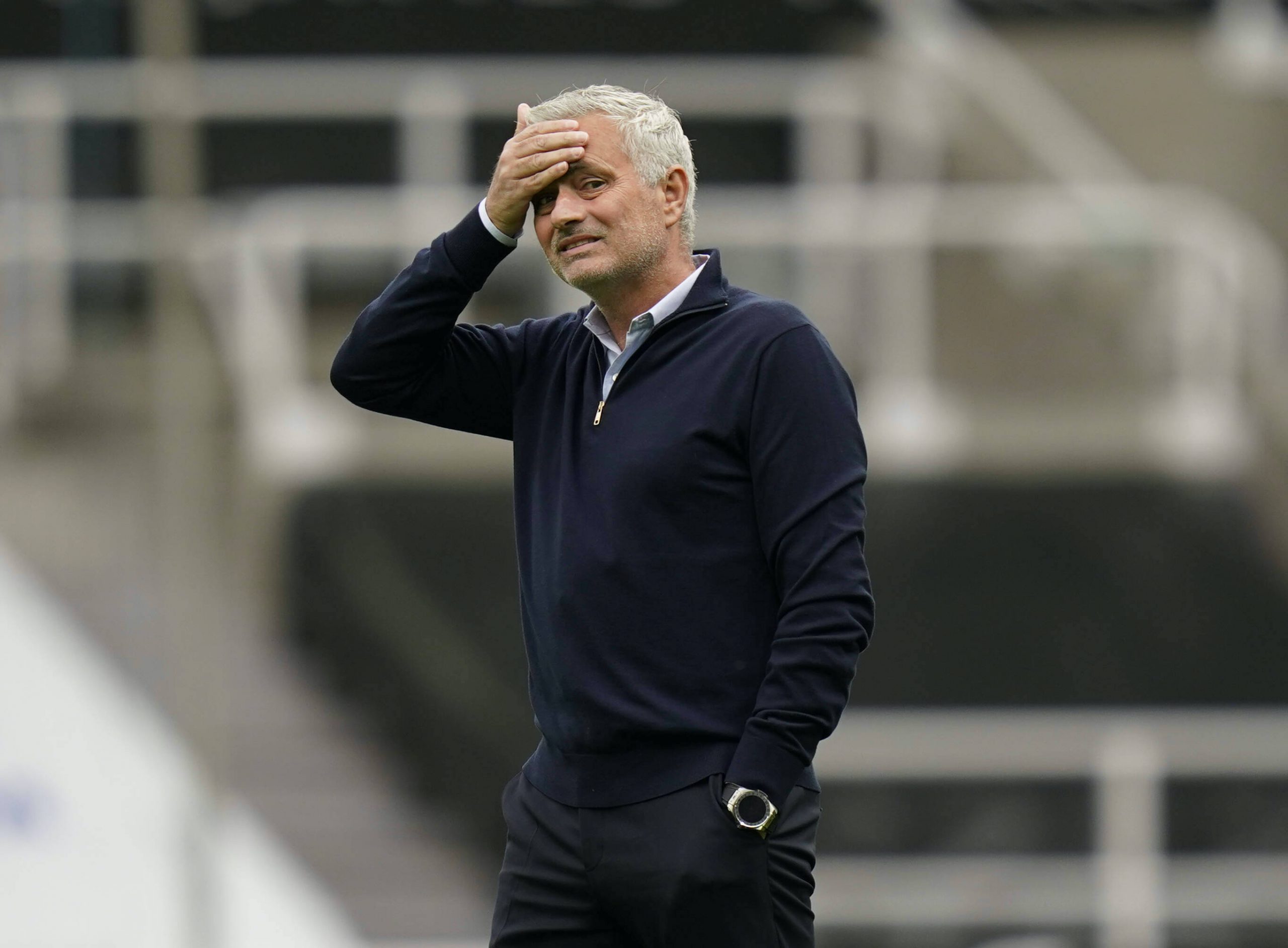 Mauricio Pochettino’s Tottenham Hotspur career ended after a game against Sheffield United, and if most Spurs fans had their way the same fate would have befell José Mourinho.

Mourinho, the self-anointed ‘Special One’, a winner wherever he goes, is fast running out of fans after an underwhelming start to life in North London.

“In José, we have one of the most successful managers in football. He has a wealth of experience, can inspire teams and is a great tactician,” Daniel Levy said after appointing Mourinho on a reported £15million-per-year contract. “He has won honours at every club he has coached. We believe he will bring energy and belief to the dressing room.”

When Mourinho arrived at Spurs, he was a man reformed (or at least that’s what was claimed). It started with a charm offensive while working as a pundit for Sky. He was jovial and ready to embrace new ideas. He talked up the club’s academy and the talent in the first-team.

It was a stark contrast to the final throes of his time at Manchester United where Mourinho cut an isolated figure. He appeared mean and aggressive. His feud with Paul Pogba seemed symptomatic of a man that had lost the dressing room. Speaking at a seminar in Portugal it’s claimed he jokingly referred to Pogba as ‘His Excellency’.

“You don’t play,” Mourinho is alleged to have told Pogba in one exchange. “You don’t respect players and supporters. And you kill the mentality of the good honest people around you. You are like a person with a flu, with a virus in a closed room – you pass that virus to the others.”

Ed Woodward decided it was Mourinho that needed to be expelled, and by Christmas 2018 he was gone. Although Mourinho’s time at Old Trafford saw the club win the Europa League and the League Cup, there was still a sense of disappointment attached to it.

The 57-year-old built a reputation by winning league titles. At Porto, Chelsea, Inter Milan, and Real Madrid he had been crowned the best, and Man Utd was expected to be next.

At Old Trafford, there was a growing concern that the game had passed Mourinho by. Antonio Conte beat him to the Premier League during his first year in Manchester, an insult given Conte inherited the Chelsea side that fell into disarray under Mourinho the year before. Then it was Pep Guardiola’s turn– the man that beat him out for the Barcelona job in 2008. Both men brought fresh ideas to the league, in the same way, Mourinho had with Chelsea in 2004.

Even when Mourinho was successful, it was getting harder to hide his resentment. The season after his last league title Chelsea imploded. Nestled in among that fall from grace was a very public feud with club medic Eva Carneiro.

He was handed a suspended one-match ban following claims that referees were afraid of giving Chelsea penalties. The man that had once charmed England with a self-confidence bordering on arrogance now looked excuse-ridden and prone to outbursts.

If Chelsea was his first strike, Man Utd felt like a second. That’s why his appointment with Tottenham was so important. The remit is simple. Spurs want a trophy. The Pochettino era was, in part, defined by the pain of almost. The league title that went to Leicester City, the Champions League that went to Liverpool.

Dismissing the Argentine was a bold step, and while it hurt, it would be more palatable if the club took the next step under Mourinho. The positive words that defined his start at the club have now been washed away by waves of frustration. Those same players seem more like a pest than a present.

“Now I know more about the profile of my players. I felt it and I feared in the second half that we wouldn’t be able to recreate,” he said recently.

The most consistent target of Mourinho’s ire has been Tanguy Ndombele. The Frenchman has shown flickers of his creativity, dribbling, and ball retention, but he is yet to be blessed with the consistent chance to show his quality.

Mourinho has largely kept him in reserve, leaving him as an unused sub in four of the last six league games. This absence, coupled with public shaming, has ruined Ndombele’s momentum in a way all too reminiscent of Pogba and further evidence of the Portuguese’s shunning of creativity.

Mourinho seemed to extend an olive branch in his own way by saying he was confident Ndombele could ‘turn it around’. His unwillingness to take responsibility for the situation is yet another mark against him. All too often the Frenchman is asked to be a late-game rescue act, which is a challenging role to fill with the added pressure of a significant transfer fee.

And while one person defines no victory or defeat, it would be unfair to parcel all of the responsibility for Tottenham’s miserable season at the feet of Mourinho. This Tottenham squad, one that skirted so close to greatness, needs a refresh and a hard reset.

The problem is, it’s hard to justify Mourinho being the man to oversee that, especially given how he has misused Ndombele so far. Change is likely to be a slow process at Tottenham, in large part due to the impact of the coronavirus. It will require patience, nurturing of young players like Troy Parrott, and a keen eye for those players that can be signed and improved.

Those are not traits Mourinho has shown in his managerial career of late. The days of Porto and a lesser-known Deco pulling strings are long gone. At the top of the Premier League are project managers that look to build a side with sustainability and longevity. Mourinho’s time in management has never surpassed three seasons at any one club. He may lay the foundations at Spurs, but it’s hard to believe he will finish the spire.

🗣 "I don't give up on players. No player has a privilege."

Jose Mourinho on whether Tanguy Ndombele has a future at Spurs 🤔 pic.twitter.com/4R9AwJ6GfI

At Spurs, he has tried, albeit slowly, to shift his tactical style into a more modern frame of thinking. The reactive style he prefers is not well-suited to a team with title aspirations, and he doesn’t seem comfortable in a proactive role.

More concerning is that the situation at Spurs is already paralleling his third season at Chelsea and Manchester United. Against Bournemouth, his side was devoid of a clear plan, and his unwillingness to take responsibility afterwards was a further insult to Spurs fans.

Wins against Arsenal and Newcastle will soften those claims, but an air of discontent hangs around the club. They have the fewest points of a Premier League campaign at this stage since 2008/2009, and that makes the notion of him remaining long-term depressing for Spurs fans. That hasn’t stopped him preaching the need for patience and loyalty while commending Jurgen Klopp.

🗣"When you trust a manager you trust them, it's a great example for people who think everything is done in 1 month, 1 week or 1 year, they accepted that it was a project, well done"

Jose Mourinho on Jurgen Klopp winning the title at Liverpool after being at the club 5 years pic.twitter.com/1zayNgr5UD

“If the results in the second season are not good you keep improving, and you go to the third season, you go the fourth and of course when the manager is good, and the structure behind is good, and when they manage to do a collective work like they did the results arrive.

Mourinho is right to preach patience. When Jurgen Klopp joined Liverpool, he made no bold proclamations, but he did promise a league title in time.

The issue with Mourinho aligning himself with this school of thought is that it goes against the evidence of his career. The similarity between his relationship with Ndombele and Pogba is another concern, with Man United now firmly justified in picking Pogba over the Portuguese. Spurs are facing a similar decision, and the fact this season has felt so similar to Mourinho’s third year, historically, make it hard to pick Mourinho as the club’s long term option.