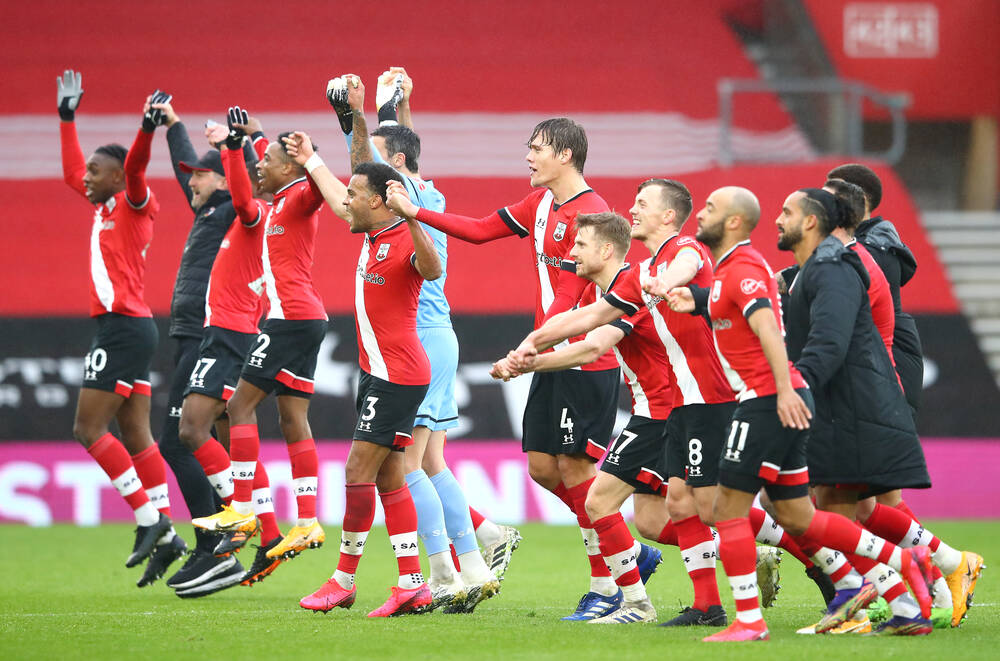 At full-time following their 1-0 win over Liverpool on 4th January, Southampton head coach Ralph Hasenhüttl got down on his knees in tears. The win was massive for the Saints, especially considering that they had so many players unavailable, but for both coach and club, it meant so much more. For the Austrian, it was a win against Jürgen Klopp, a man who he had admired and been compared to many times throughout his career, a man he had observed and learned from in between jobs and, crucially, a man he had never beaten.

For the club, it was further proof that sticking with Hasenhüttl through the difficult times was absolutely the right choice. They were 18th when they appointed him on 5th December 2018. By January of 2021 after beating the reigning champions, they were sixth, with a strong chance of ending the season in a European place. In between, there were a few blips, a comparatively small net spend, an embarrassing defeat to Leicester City that will always be mentioned for as long as the Austrian is there and a squad that’s been developed and polished in Hasenhüttl’s image.

It’s not an exaggeration to suggest that Southampton are one of the league’s most exciting teams to watch – even when their best players aren’t playing. It’s also not an exaggeration to suggest that Hasenhüttl is one of the Premier League’s best coaches. He is most likely some way behind Klopp and Pep Guardiola but, based on the last few years, he is certainly in the same bracket as José Mourinho and Carlo Ancelotti, despite his more limited CV. The show of emotion after beating Liverpool showed a man that was proud of his work, his team and his effort. The win truly meant more.

Considering his background in the game, Hasenhüttl’s success at Southampton is a tad unsurprising. A forward in his playing days, he didn’t make much of an impact in his career, but as a coach, he excelled, ensuring discipline and effort were prioritised above everything else. At VfR Aalen, the German second division club, he overcame a potentially fatal strain of hantavirus and ensured the club progressed following their promotion from the 3. Liga. Then, he moved to Ingolstadt, where a squad that was merely expected to survive in the division went from the bottom of 2. Bundesliga to a mid-table finish, and then to promotion to the top-flight in 2015.

In their first Bundesliga season, even Pep Guardiola, the then-Bayern Munich head coach, was wowed. When Hasenhüttl’s side visited the Allianz Arena, the Bavarians won 2-0, but Guardiola could only praise his counterpart: “Today we encountered the best team we’ve been up against so far this season,” he said after the game.

The gradual rise through the ranks saw him trusted with the job at RB Leipzig, who, like Ingolstadt, had just been promoted to the Bundesliga. Unlike Ingolstadt, however, their resources were immense and Hasenhüttl ensured that he utilised them all. When Emil Forsberg, the team’s best player the previous season, was unfit at the start of the 2016-17 campaign, he wasn’t hesitant to drop him. That ruthless attitude resonated throughout the squad, but rather than alienating his players, they largely understood that in order to succeed they had to be at their best at all times. Under his tenure, Leipzig qualified for the Champions League before Hasenhüttl left in 2018 to join Southampton. The task on the Hampshire coast was a little more difficult. Having enjoyed some relatively successful years under Mauricio Pochettino and Ronald Koeman, the club had lost its direction and was meandering under coaches like Mauricio Pellegrino and Mark Hughes. Hasenhüttl’s task was to fix that.

A crucial aspect of it was to change the culture of the club to one that had become popular with the more successful Pochettino and Koeman. In his first summer in charge after guiding Southampton to survival, he ensured the inclusion of younger, hungrier players. The likes of Kyle Walker-Peters, Jan Bednarek, Jack Stephens and Che Adams – all in their early to mid-20s – were integrated into the first-team picture.

Given that he had his hands tied financially and had to sell in order to buy players, he has done a fine job of making good use of the resources he had. His permanent signings, Walker-Peters, Adams and Moussa Djenepo, have improved with time while others such as Mohammed Salisu and Ibrahima Diallo are expected to follow the same upward trajectory.

More significantly, Hasenhüttl wanted to employ methods that would be reflected across the whole club. At RB Leipzig, he used the 4-2-2-2 with an intense focus on pressing and aggressiveness when competing for the ball, something synonymous with all Red Bull clubs and their sporting director, Ralf Rangnick. At Southampton, after initial trial-and-error, he retained that and now wants it to be reflected amongst the youth teams as well. That is why he created the “SFC Playbook”, a document that acts as a guide for younger players.

“We have principles against the ball and with the ball,” said David Horseman, Southampton’s B team coach to The Athletic. “If I need to find that I can go to the Playbook and it will give me an example from a session. It’s amazing. It’s the most unique thing that I’ve seen. It’s a brilliant learning tool. It will only grow and develop.” Employing a similar style of football across various age groups is useful as it helps develop an identity across the club and makes it easier for players and coaches to transition from youth to senior football. This, therefore, serves to maintain the steady conveyor-belt of exceptional young talent to emerge from Southampton in recent years as well as providing a level of relative certainty in this brutally uncertain financial period.

The playbook and the streamlining of their football philosophy are part of a long-term vision at Southampton – a vision that got its wings with the long-term extension of Hasenhüttl’s contract at the club, which is now set to run until 2024. The contract came as a result of an impressive comeback following a dire spell of results at the start of the 2019-20 campaign. Losing 9-0 at home to Leicester City, and then three more losses after that, seemed to be the end for the Austrian, but Southampton stuck with their man and earned their reward.

It goes to show that investing in a project and accepting that blips – even as bad as a record home defeat – can be worthwhile. Now, Southampton are set for a brighter future with one of the best forwards in the league in Danny Ings, an attacking set-up to excite and youngsters making the most of the chances they get. The coordinated pressing and organized chaos of this team is brilliant to watch and a sign of an excellent coach doing excellent things.

Crucial to that has been creating an attacking partnership that understands the demands of Hasenhüttl’s football. Ings and Adams are eerily similar to the Timo Werner and Yussuf Poulsen partnership that Hasenhüttl nurtured at Leipzig – in style and in numbers – and for the coach, both duos have worked well. Additionally, improvement in players like Oriol Romeu and Jannik Vestergaard, who looked like lost prospects just 12 months ago, has been vital to their improvement.

🗣 "He's a great lad, for the Burnley goal I just knew where he would be"

Che Adams speaks about his partnership with Danny Ings pic.twitter.com/xo3AiMtF56

This season has seen the benefits of backing the Austrian and perhaps provides an indication to other clubs to stick with their manager for longer. The Saints have not been able to spend as freely as those around them – Hasenhüttl’s two full seasons have seen them spend a little over £89m, with a net spend of around £40m – and even then, the players and board have invested in a project.

“He once said to me that managing in professional sport is all about winning but the issue really comes down to deciding what winning means,” said chief executive Martin Semmens. “Winning means lifting titles but it’s also about taking a project forward and I think he feels strongly that we have the ability here to feel like we are taking the club forward.”

Southampton now have someone to believe in, and he believes he can take them further. Wherever Hasenhüttl has managed, he has taken the club to new heights: whether it was Aalen to the second division, Ingolstadt to the Bundesliga or RB Leipzig to the Champions League. Southampton was arguably his toughest job, and after a difficult start, he’s working his magic once again.

Those tears after beating the champions were justified. It wasn’t just a win over Liverpool, the champions of England and the best team in the country. It was an indication that the project was moving in the right direction, and his players, no matter who they were or how much experience they had, are fully invested in the project. From the jeers after Leicester, the cheers that followed and the tears after Liverpool, this is Hasenhüttl’s ever-improving, ever-exciting Saints.