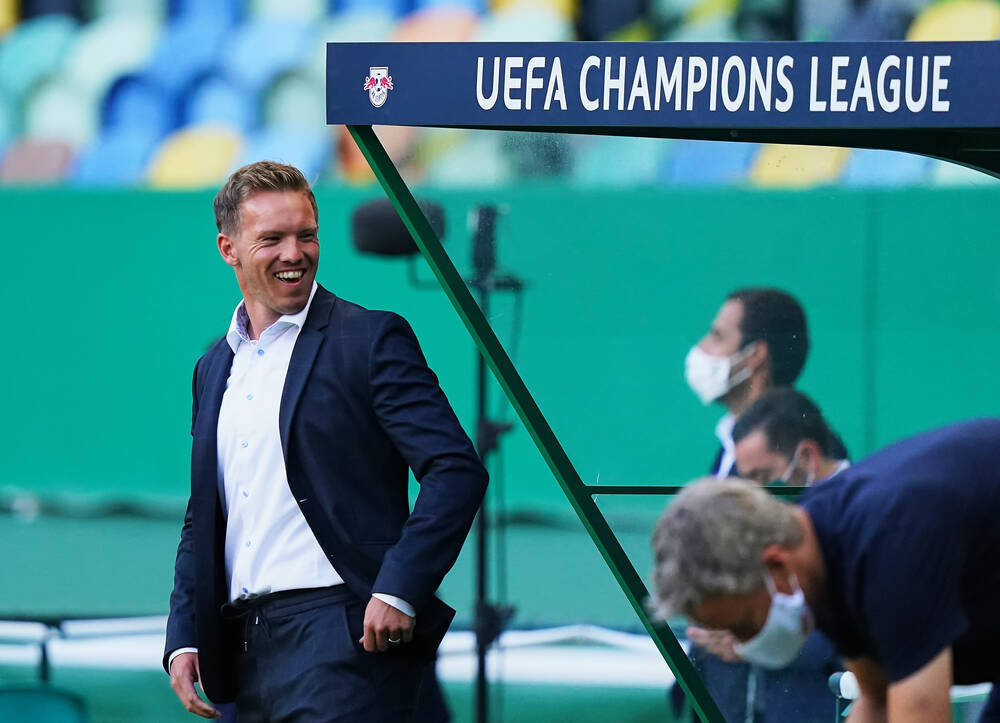 “While he didn’t say: ‘you’re going to be coach’, it was more of a pragmatic decision,” Julian Nagelsmann recalled of his former coach Thomas Thuchel, speaking in an interview with spox.de. “Since Augsburg were still paying me anyway, I started scouting opponents for him.”

Nagelsmann, then just 20-years-old and playing with FC Augsburg’s reserve side, had seen his promising playing career crumble due to a knee injury.

“After my injury I didn’t want to have anything to do with the sport,” he told CNN. “I wanted to get away for awhile because I had invested so much time in it.”

That’s when, motivated by Tuchel’s advice, he embarked on a new path, and took a role with 1860 Munich’s U17s, assisting his former youth coach Alexander Schmidt.

He would spend two years with 1860 before joining Hoffenheim in a similar capacity. The move was a catalyst for Nagelsmann. He won the Under 19 Bundesliga in 2014 and a mere 18 months after joining the club he was working with the first-team and garnered the nickname “Baby-Mourinho” from goalkeeper Tim Wiese.

4. During the 2007/08 season, current PSG boss and future UCL semi-final opponent Thomas Tuchel was Augsburg 2 coach and gave Nagelsmann his big break with the task of scouting upcoming opponents for him:

"That was my way into coaching. I learned a lot from him." pic.twitter.com/oRH4Ppt9vs

His reputation blossomed further, and the club appointed him head coach in October 2015. Huub Stevens was the manager at the time and the plan was for Nagelsmann to succeed him at the end of that season.

When Stevens resigned due to ill-health in February 2016, the transition was brought forward making him the youngest managerial appointment in Bundesliga history.

“If you are appointed a boss of an established economic enterprise at the age of 28, this also would be a big story,” he told the BBC.

Nagelsmann’s start in the hot seat was very much that. Hoffenheim had two wins from 20 games and were staring down the barrel at relegation. He navigated those choppy waters, however, and Die Kraichgauer began climbing the league, ultimately leaving them 9th in the Bundesliga. His next project, RB Leipzig, was a new face eager to challenge the established elite and it felt like a match made in heaven.

The 30-year-old joins from @achtzehn99_en and has agreed a contract with #DieRotenBullen until 2023. #Nagelsmann2019 pic.twitter.com/DVRrvBHR4c

“I like his ability to recognise problems in-game and switch,” Bundesliga reporter Archie Rhind-Tutt told Compare.bet news. “There is always a Plan B. He also brings his players on individually in very measurable ways. See: Werner, Sabitzer, Süle, Gnabry, Vogt, Rudy etc.”

Nagelsmann has wasted little time making a big impression at Leipzig. The club finished third last season, and after a surprise win against Diego Simeone’s Atletico Madrid, they are one game away from a Champions League final.

As the world is keen to point out, Nagelsmann is younger than Lionel Messi and Cristiano Ronaldo. While their skills are best evidenced with a ball at their feet, Nagelsmann’s ability comes in how he sees the game from the sideline.

“Atletico wouldn’t have been the best opponents for Timo Werner because there is not a lot of space behind the defensive line,” he said after the match. “That’s why we played with three offensive midfielders to create the space.”

While many point to the sharpness of his mind, Nagelsmann’s focus is not on systems and styles, but people.

“It can happen that you get players who’ve got the ability, but just don’t seem to be able to go anywhere with it,” he said in an interview. “When you’re in a leadership role – and this applies in life, as much as it does in football – trying to get a group of people to pursue a common goal, each individual must still also feel that they can develop and reach their own goals. For this, you’ve got to understand empathy and guidance.”

It is hard to pinpoint the genesis of Nagelsmann’s outlook, but he has admitted the tragic passing of his father, Erwin, following a short illness, shaped him tremendously. In an interview with the Independent, he said it “made me more mature and grown in my life.”

That strong character showed itself again when he spurned interest from Real Madrid.

“The main thing is to make the right steps, not the biggest steps,” he explained. “Real Madrid is probably one of the highest steps you can take so I thought ‘you turn 31, go to Real and where do you go from there?”

This allowed Nagelsmann to explain to the players in more detail the in-depth tactical instructions he wanted carried out while they were playing pic.twitter.com/4GHyNC0ygP

The youngest coach still left in the Champions League; he is also one of three German coaches still in the competition. It begs the obvious question, while Nagelsmann is good, how much has German culture propelled his rise?

“All of these factors helped Nagelsmann but he was also aided by the clubs he worked at. Both with no history, no baggage, big tech, the chance to develop in a very special way even for Germany. Not like say Werder Bremen where there’s a lot of history and expectation from that community – non-existent in Sinsheim and Leipzig (at least not for RB) really. So he has been smart by selecting clubs that aid his rise. Joining a club with all of the rest will be a big challenge for him, perhaps the biggest of his career.”

His focus on the person is also a reflection of his culture.

“I think German coaches are in tune with the person because those who take the FL, the top coaching badge, get the coaching they need to be equipped to consider those areas,” he added. “That being said, being exposed to situations that allow such skills to develop doesn’t make you good at them.

“Being a good man manager or looking after the person as much as the player is also a skill that comes down to the individual more than a coaching course of a nationality. Nagelsmann is somewhat different given that he has worked at clubs that are very much clean slates and allow him to do what he wants to do without much extra noise. But those around him still remarked from the start of his time in the first team at Hoffenheim that he has a great sense of what to do and say in situations.”

That journey of personal development has taken Nagelsmann down some unique paths.

“It was about four or five years ago,” Nagelsmann said of his time training horses. “It was about developing as a person. How do I control the effect I have on other people? When I walk into the room and people don’t know me, their first impressions are: ‘He’s arrogant’. I think I’m assertive. People’s perceptions change when they get to know me.”

People are certainly getting to know him now. By no means a secret of European football, his meeting with PSG will also see him reunite with the man that started this all, Thomas Tuchel.

His measured approach won’t allow him to think past their meeting, but for those of us on the outside, it’s hard to see anything but a bright future for the 33-year-old. A coach by accident, he could now be the torchbearer for a new generation.