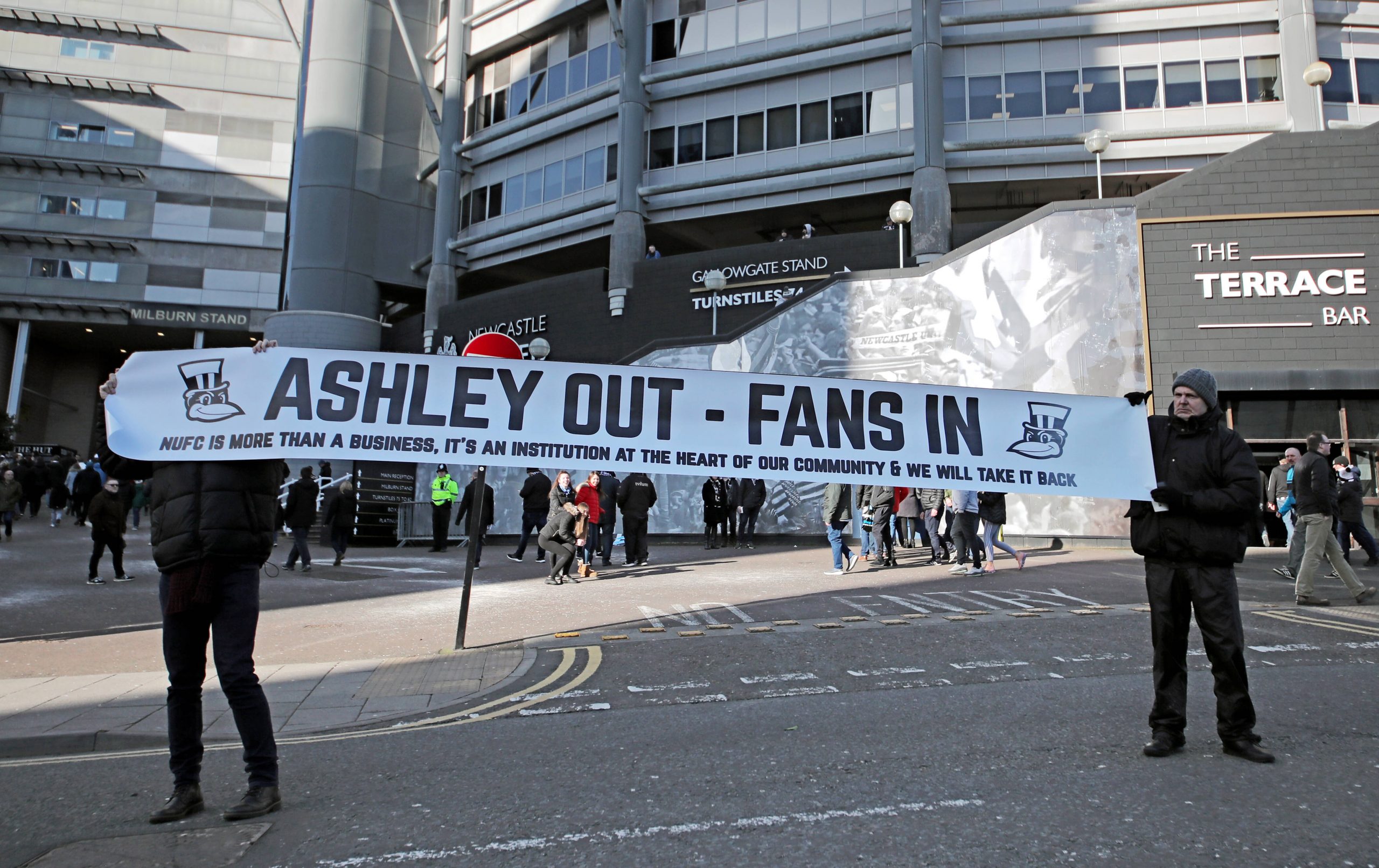 “What is a club in any case? Not the buildings or the directors or the people who are paid to represent it. It’s not the television contracts, get-out clauses, marketing departments or executive boxes. It’s the noise, the passion, the feeling of belonging, the pride in your city.”

Those words from Sir Bobby Robson will forever echo around Newcastle, and in the last few months they’ve taken on a renewed importance in an attempt to rationalise the complicated situation that Newcastle United fans find themselves in.

Newcastle fans have spent their lockdown waiting for confirmation that Mike Ashley’s 13-year reign is over. That moment is almost more important than who replaces him, as anticipation surrounding the change increases.

Can’t contain my excitement of getting rid of Mike Ashley!@NUFC and fan’s deserve it. pic.twitter.com/8v8gunZgMn

Of course, they’ve been here before, waiting for that last big step, and yet, they’ve never felt closer to waving goodbye to Ashley. The Premier League checks are well underway, and it’s now being decided whether the potential new owners are ‘fit and proper people’.

The discussion surrounding that aspect has largely applied to the potential majority stakeholder, the Public Investment Fund of Saudi Arabia (PIF) and not Amanda Staveley or the Reuben Brothers, who will take 10% each. The links to the Saudi Arabian state bring into focus the country’s controversial reputation which includes a poor human rights record, and more recently the regime allegedly being behind the murder of journalist Jamal Khashoggi.

Newcastle fans have never faced a dilemma like this, and it’s one that will only persist if the takeover is confirmed. For some, the argument is simple: how can you avoid Saudi Arabia in 2020?

The country’s surge in investments means they own stakes in a variety of companies including the taxi you order to the cartoons you watch on TV. They are often silent partners, but the Crown Prince Mohammed bin Salman has also been welcomed on the doorstep of Downing Street. If he is deemed acceptable by the Prime Minister, why must football fans reject him?

That’s because football clubs aren’t considered businesses in the traditional sense; the attachment is far more romantic than that. At the same time, the PIF will gain far greater influence in Newcastle than they have in the likes of Uber.

Few will argue that Newcastle fans have very little say in who owns their club, but that should not give way to them becoming advocates for Saudi Arabia.

Twitter handles should not suddenly display the country’s flag, nor should Bin Salman’s image become a display picture (granted, in some instances, these accounts are actually bots aimed at silencing critics).

Instead, they should read the words of Hatice Cengiz, the fiancee of Jamal Khashoggi. They should dig into the past of these new owners in the same way they have Ashley, and question why they have earmarked Newcastle as the perfect investment.

‘Sport washing’ feels like a reasonably modern term, and while it’s inception can be traced back to 2015, you can find examples of it much further back than that. The Oxford Dictionary recognised it in 2018 as part of a range of words in which “washing” is applied to ‘suggest deceptive, insincere and opportunistic appropriation of some value or cause’.

While you would hope those at the top of the game could halt any attempt at this, it has become apparent the Premier League’s tests were not designed for such situations, and are instead geared towards barring those that have engaged in piracy or business malpractice (the former of which Saudi Arabia are accused of). The obstacles are clear, and it is both telling and depressing that piracy is a more significant threat to this deal than the murder of a journalist.

And what of the man who agreed to all this? Michael James Wallace Ashley.

The British businessman has largely escaped criticism for being the PIF’s door into the Premier League. Ashley once claimed he would only sell ‘to the right buyer’, but that felt an ambiguous promise when it tumbled from his mouth.

His time in charge of Newcastle is in large part why this takeover has looked so appealing. It’s nigh impossible to crystallise the opinion or motivations of a fan base when a situation is this complex. Still, a poll from the Newcastle United Supporters Trust (NUST) showed 96.7% of those that responded were in favour of the takeover while the NUST has acknowledged reservations about the involvement of the Saudi Arabian state.

The most obvious reason for supporting the endeavour is the potential investment. If the PIF are determined to be the best, then Newcastle could enjoy a meteoric rise. To some, the thought of being a well-run football club is enough to set the imagination on fire. Ashley’s time in charge saw finishing 17th place as the club’s main ambition – nothing more. Sometimes that was achieved, even surpassed, twice it was not, and the club were relegated. That, along with the renaming of the stadium, and a catalogue of bad faith decisions built a toxic atmosphere.

“But you can put any accountant on our books, and it’s whiter than white,” Ashley said last year. “I’ve felt like challenging the fans on that sometimes. I’ll pay, and you can have an independent auditor come in and review us. But will you please stop saying these things? I’m guilty of a lot, but not that.”

For others, the excitement rests in the possibility. This could be an overhaul of a football club. From the training ground to even the local area, the city itself could feel the benefit. The Reuben Brothers, David and Simon, will be minority owners of the club, and they already own a sizable piece of Newcastle city centre.

What currently sits outside St James’ Park on match days is a food bank – a symbol of both the region’s generosity and the government’s shameful abandonment of those in need. The potential new owners are already considering a gesture towards the local NHS hospital, and the thought of the club potentially engaging with the local community in a way Ashley has not is hard to reject.

This deal, regardless of the new owners, will see many Newcastle fans return and re-engage with their club (and some who will walk away). There will be no need to hand out free half-season tickets as Ashley did earlier this year.

As for the broader picture, you will likely see Qatar and Saudi Arabia’s feud played out through football.

A report in the Guardian this week predicted ‘serious doubts’ about whether the takeover could happen. The report claimed the World Trade Organization (WTO) had ruled that Saudi Arabia was behind a pirate satellite TV and streaming service known as beoutQ, which among other things, had illegally pirated Premier League games.

By the end of the evening, there were contradictory claims that the WTO was instead looking to rule on ‘Saudi Arabia’s alleged failure to protect intellectual property,’ not their involvement in beoutQ.

It is a surreal spectacle to watch football fans cite French court rulings and the investor make-up of Arabsat when discussing their football club, but this is a different time, and it may soon become the norm for Newcastle fans. Consistency is vital, however, and to research supporting arguments is meaningless if you are not also willing to study why the new owners would be bad for Newcastle and football in general.

This complexity is also why the Premier League is in such a predicament. Their willingness to stop this deal is hard to pinpoint, with Saudi Arabia expected to make a play for broadcasting rights if the takeover is passed. They may still block this deal and then enact swift reform of the tests on new owners (something the EFL should also consider), but that could see them lose a bidding war over rights. They may even push through the deal and then seek reform, but that would seem disingenuous.

Few will argue that some form of movement is needed. A light amid the dark. That may now arrive after the league agreed to return to action.

Of course, running parallel to all this are the fans—all with different opinions, expectations, and requirements. The one uniting factor is the desire for an answer. Clarity on who holds their club. Only then can they decide how to react and how to move forward.