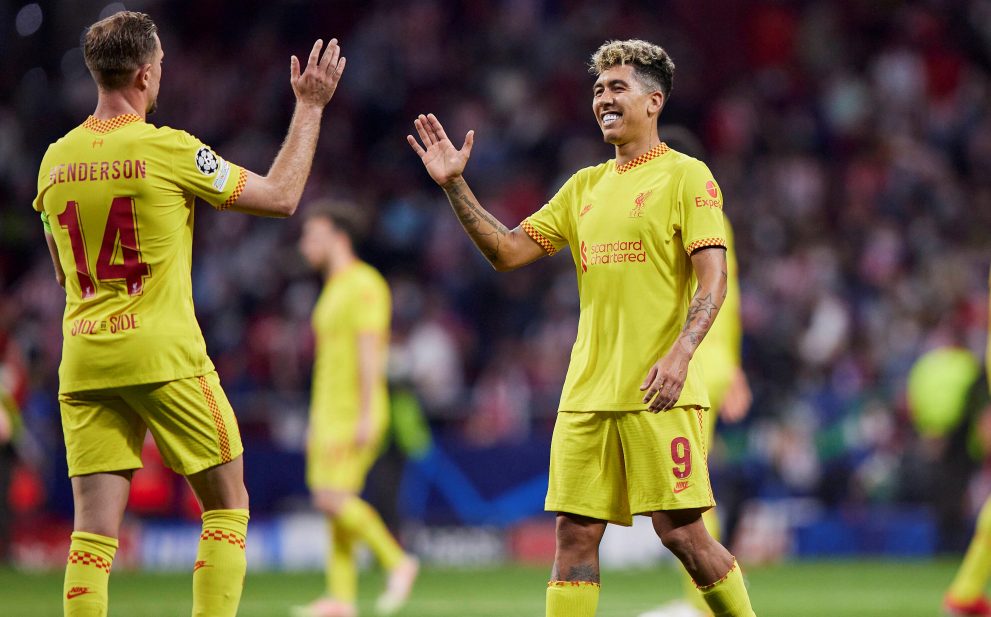 For all his achievements in the game, Mohamed Salah has never soared as regularly as he is at this moment in time. The Egyptian is reaching new heights in his career with many now of the belief that he is the best footballer in the world, and there is plenty to support their argument.

However, Salah isn’t the only Liverpool player currently at the peak of his powers. Roberto Firmino has never been in better form for the Anfield club than he is at this moment with the Brazilian’s performance in the 5-0 mauling of Manchester United a showcase of everything he offers on a football pitch.

“Mo gets a lot of attention and rightly so but Bobby, for people with football knowledge, I’m pretty sure when he finishes playing people will write books about the way he interpreted the false nine position,” Jurgen Klopp said after the landmark victory at Old Trafford.

“I don’t say he invented it or we invented it, but with the way he plays it, from time to time it looks like [that]. There are different things to do on the pitch – some of them are defensive, and what he did in that department tonight was absolutely insane. Offensively he is a nice link-up player and he finishes off from time to time as well.”

"He’s a very important player to us – he’s a connector. He’s the best offensive defender I ever saw in my life, definitely! He’s a ball chaser, defensively incredibly smart with all of the things he’s doing. Technically on the highest level." 🔴 pic.twitter.com/yn4xIeLzC6

Against United, no Liverpool player made more dribbles (two) than Firmino with the 30-year-old also registering three shots. However, his influence isn’t always quantifiable on the stats sheet. Instead, it’s Firmino’s movement and appreciation of space on the pitch that makes him such a special centre forward.

The relationship between Firmino and Salah has been key to the success Liverpool have enjoyed in recent seasons and it is now stronger than ever. The way the former drops deep into midfield creates space for the latter to burst into in behind. As a false nine, this is Firmino’s trademark move which explains why his influence isn’t always clear in the stats. As such, it’s often in the passes he doesn’t receive that he is most effective.

Of course, this isn’t to say that Firmino doesn’t know the way to goal. The Brazilian has found the back of the net four times in just seven Premier League appearances (only three of them starts) this season as well as two goals in two Champions League games.

This isn’t why he’s so important to Klopp’s system, though. The way Firmino drops deep off the frontline also allows Liverpool to control matches in the centre of the pitch – see the way the Reds overwhelmed Fred and Scott McTominay in midfield on Sunday. Even when Firmino doesn’t touch the ball, his presence occupies opponents, creating space and opportunities for teammates to exploit.

Firmino is the embodiment of the difference between Liverpool and Manchester United. His role in Klopp’s team is for the benefit of the system as a whole. Salah is able to do what he does, in part, because of the work Firmino does. Similar benefits could also be said to befall Sadio Mane. Ole Gunnar Solskjaer, however, lacks players like the 30-year-old, but even if he did, Firmino wouldn’t be allowed to play in such a way for United. He is the antithesis of Cristiano Ronaldo, his opposite number on Sunday.

Nonetheless, questions have been asked of Firmino’s binary contribution in front of goal. Diogo Jota’s arrival at Anfield two summers ago put the Brazilian’s place in Klopp’s strongest XI at risk with the former Wolves attacker making an instant impact on Merseyside. It’s certainly true that Jota has given Liverpool a different dimension in the final third with the Portuguese a more direct option. But it is Firmino that remains Liverpool’s first-choice centre forward.

The Brazilian is the ultimate Klopp footballer, more so than ever before in fact. He is the one who invariably leads Liverpool’s high press, setting the tone for the Reds’ now-infamous Gegenpressing. Jordan Henderson might be the club’s most vocal leader, and the player who wears the captain’s armband, but Firmino is the leader in terms of his on-field contribution.

Serenaded after an outstanding contribution at Old Trafford.

“He is a connector, he is the best offensive defender I ever saw in my life,” Klopp recently explained, elaborating on Firmino’s qualities. “He is a ball-chaser defensively, he is incredibly smart with all the things he is doing, he is tactically on the highest level, he is able to play in the smallest spaces, the tiniest spaces, to make incredible good decisions in a really short time. And on top of that, he scores goals as well.”

One wonders how fading physicality might affect Firmino’s game as he enters the twilight of his career. The Brazilian is currently one of the fittest forwards in the Premier League, covering more ground than anyone else in his position this season, but a loss of pace or stamina could impinge his ability to repeat his recent feats as he moves into his 30s.

As already referenced, however, Firmino’s intelligence in recognising how to make the best use of space on a football pitch is his best quality and so that should keep him at the elite level of the sport for years to come. The problems that Ronaldo, for instance, has experienced in not being able to press from the front shouldn’t, in theory, afflict Firmino quite so acutely.

When Klopp’s time as Liverpool manager is chronicled, Salah, Alisson and Virgil van Dijk will likely be remembered as the players who defined a period of great success for the Anfield club more than any others. However, Firmino represents the clearest distillation of everything Klopp and his outlook on the game stands for. His importance to Liverpool has never been greater than it is now.