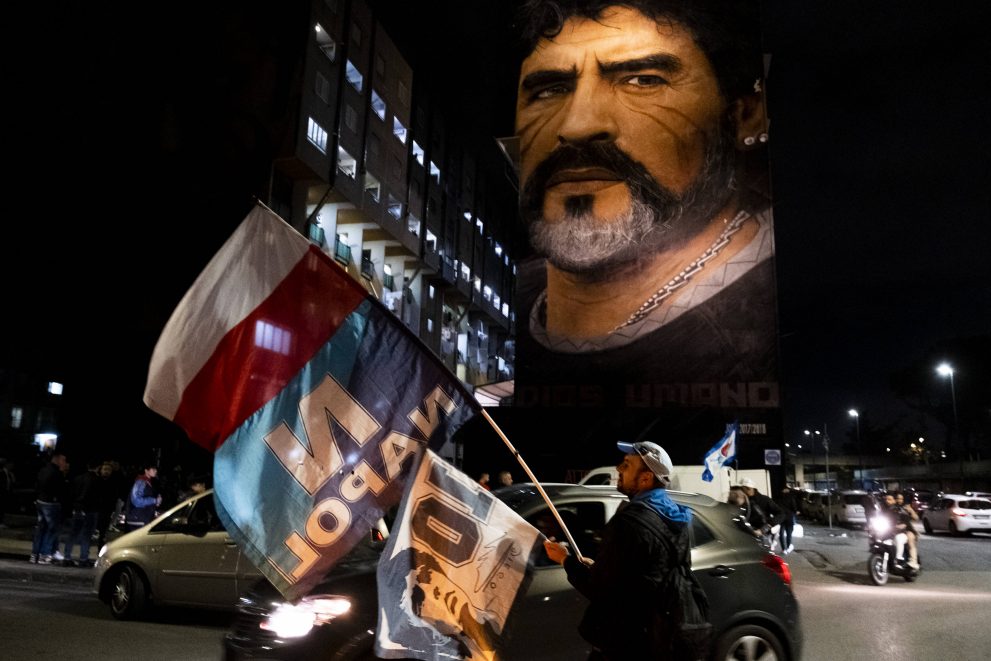 The pain the city of Naples felt when Diego Maradona passed away last year was something that transcended sport. Theirs was a connection that ran deeper than between most players and clubs, which was especially impressive considering that Maradona was an outsider looking to learn about the cultures and values of his new home when he joined. But it just so happened that Maradona and Napoli were kindred spirits and their belief systems merged instantly.

Maradona is arguably the greatest player to ever live and almost unquestionably the best of his generation. But what made him stand out was his team orientation and sense of togetherness; it would have been easy for a footballer with his talent to distance himself from those less naturally gifted than him. But Maradona led by example, encouraging and inspiring his teammates. He was a hero for the people, and that is why Neapolitans took to him with such vigour.

When he played, they watched and followed; it was like a religion and he was their leader. Naturally, when he died, there were days of mourning; life stopped and grief engulfed the city. It is a response typically reserved for royalty and religious leaders, but it is neither offensive nor fear-fetched to say Maradona touched the city of Naples in much the same way.

There has always been a sense that Napoli are an unfashionable club in an unfashionable city. Both from a football and tourism perspective, it has traditionally lagged behind both Rome and Milan, but Maradona was, in a way, once an unfashionable superstar. He didn’t stay long at Barcelona, one of football’s historical giants, after a big move from Boca Juniors ended in injury and disappointment. He then moved to Napoli to free himself and showcase his talents once again. His claim to be the greatest of all time is essentially condensed down to the seven years he spent at Napoli between 1984 and 1991. He was there when he played the tournament of his life for Argentina in Mexico ’86, as well as winning two Serie A titles in 1987 and 1990. When his country played Italy at the San Paolo in that summer’s World Cup, he attempted to persuade the locals to switch allegiances. It worked, albeit partially, which itself demonstrated his pulling power.

His death at the age of 60 was abrupt, although, unfortunately, hardly surprising. His health had suffered from a manic lifestyle, but it all shaped the remarkable human that was El Diego. It is fitting that Napoli are now looking in great shape to finally add another scudetto to their collection. They’ve been to hell and back financially since the late 80s, but under Luciano Spalletti, now is their best chance of becoming champions again. Without forgetting their 91-point haul under Maurizio Sarri in 2017/18, when they were beaten by a Juventus side at their peak, expectation is building in the city like never before.

While it is early days, il Partenopei are nonetheless top of the league, level on points with AC Milan. But the context of the title race as a whole is where the hope truly lies. For starters, Juventus’ crown has slipped. They may have hobbled to another Scudetto under Maurizio Sarri in 2019, but they have not been able to maintain their signature winning mentality since Max Allegri left. Champions League football was assured last season under Andrea Pirlo, but Juve looked a spent force and Allegri has since returned to resurrect them. Inter may be the current reigning champions, but they have fallen on financial hardship, losing the leadership of manager Antonio Conte as well as star players in the shape of Romelu Lukaku and Achraf Hakimi.

Furthermore, the media focus has been well and truly focused away from southern Italy. Instead, the spotlight has been pointed at the recent resurgences of Milan and Inter, the Old Lady’s floundering and the Mourinho express entering Romei. But that is the way they like it. This has allowed Spalletti, who took over from Gennaro Gattuso in the summer, to instil the sort of intensity demanded by a crowd that is among the most aggressive and electrifying in Italy. Their passion for the team, which drove their love for Maradona, is powerful and something to behold. Perhaps where he is succeeding most, however, is with the balance in the side. They are third top scorers in the league behind both Milan clubs, but after nine games, they’ve conceded just three goals. It is a fantastic base for the likes of Victor Oshimhen, Lorenzo Insigne, Dries Mertens or Hirving Lozano to make the difference in attack.

Positional play is key for their hold on games and why they can still look threatening in attack despite solidity at the back. Spain midfielder Fabian Ruiz is among the most underrated exponents of the single pivot in Europe. He sits just behind Polish international Piotr Zielinski, who links midfield and attack very well alongside former Fulham man Andre-Frank Zambo Anguissa; it is a perfectly harmonised trio with a great blend of qualities, consisting of Fabian’s technique, Zielinski’s flair and Anguissa’s physicality. Napoli are going to be difficult to stop if they keep going at this rate.

The style may not be what Maradona represented — freedom, skill and unpredictability — and it is different to the Napoli of Sarri’s days. But a strong defence, built around Kalidou Koulibaly, could take Napoli all the way to another league title, the ultimate tribute to Maradona.

Bonds in football should never be taken for granted, and Maradona’s with Napoli was something too special for words. They came close to success four years ago, but this time, romanticism and a seismic power shift in Italian football means this is Napoli’s best chance to claim a title for years.

Only Juventus went on to win the league. pic.twitter.com/IqzS0yniLc