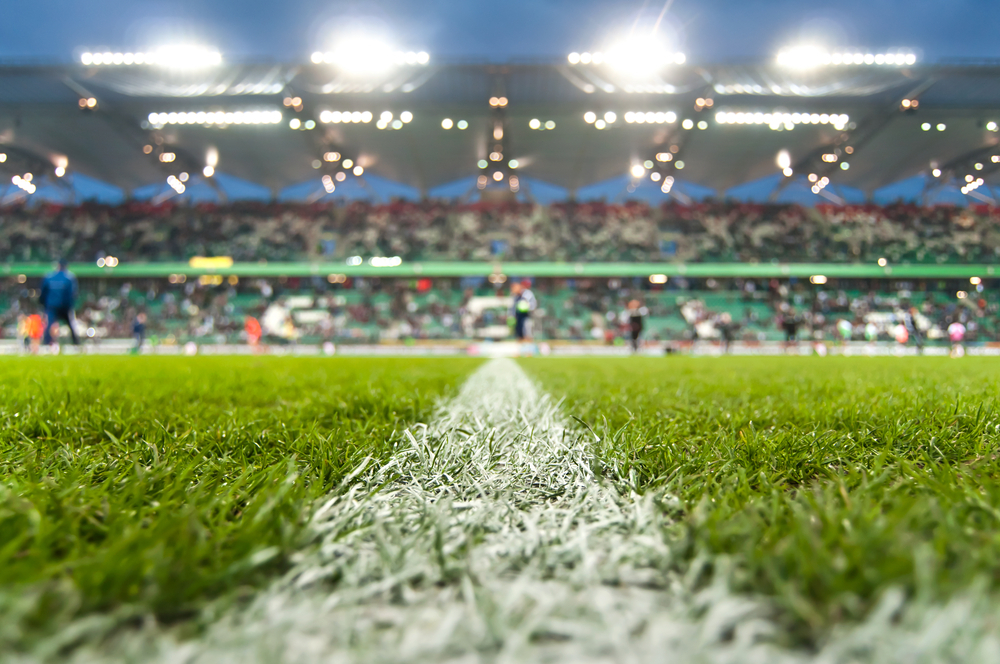 With around four billion fans worldwide, football has firmly cemented itself as the most popular sport in the world, but where is the best stadium to play and watch the beautiful game? Interested in finding out, we created our very own index to settle the question once and for all.

How we ranked the stadiums

To investigate which football stadium is the best in the world, we trawled through a range of reports and articles to identify the top 15 stadiums in the world. From this, we then created our very own index to score each stadium, assigning 0 to 100 points based on the following factors: 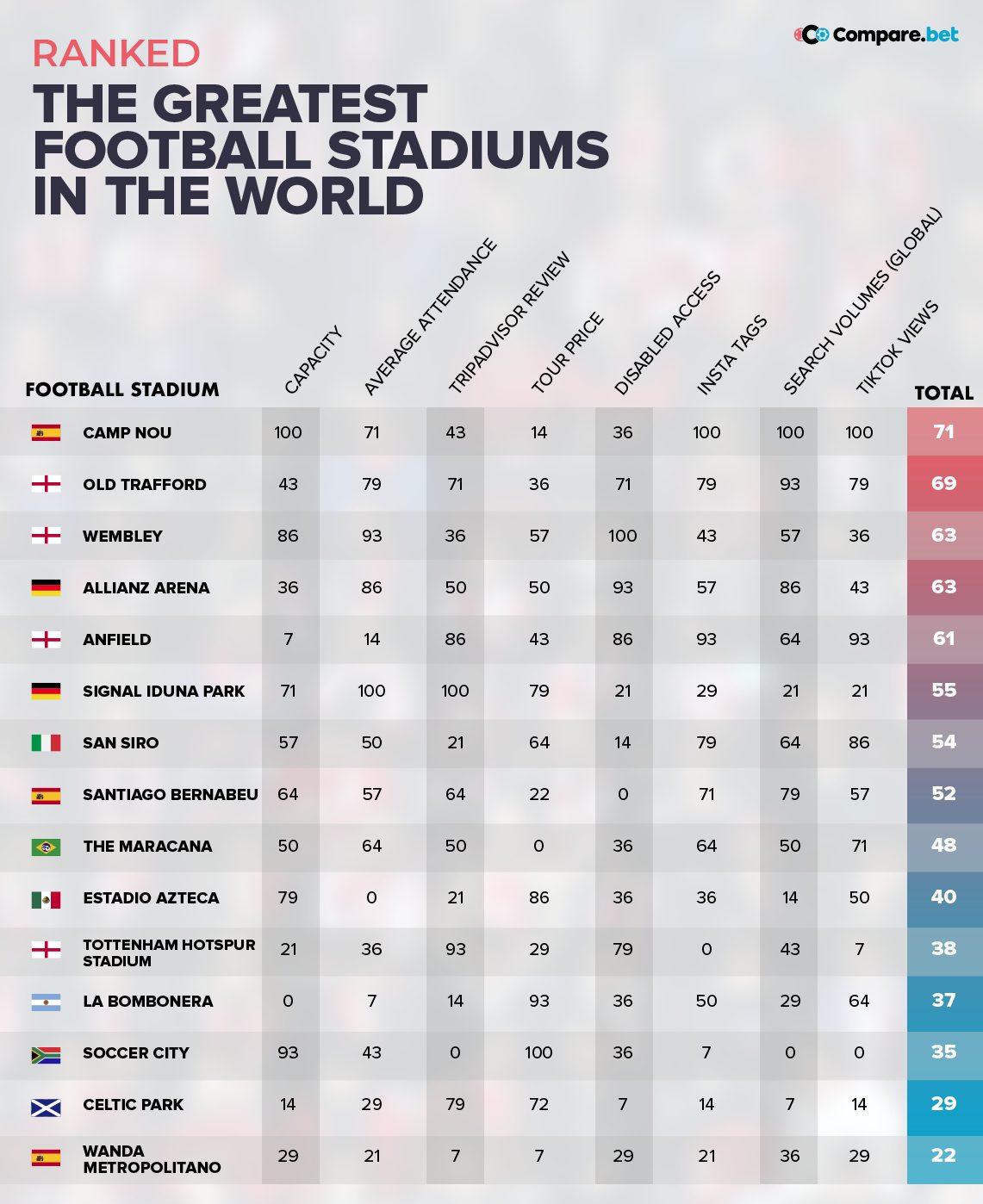 The top 15 best football stadiums in the world 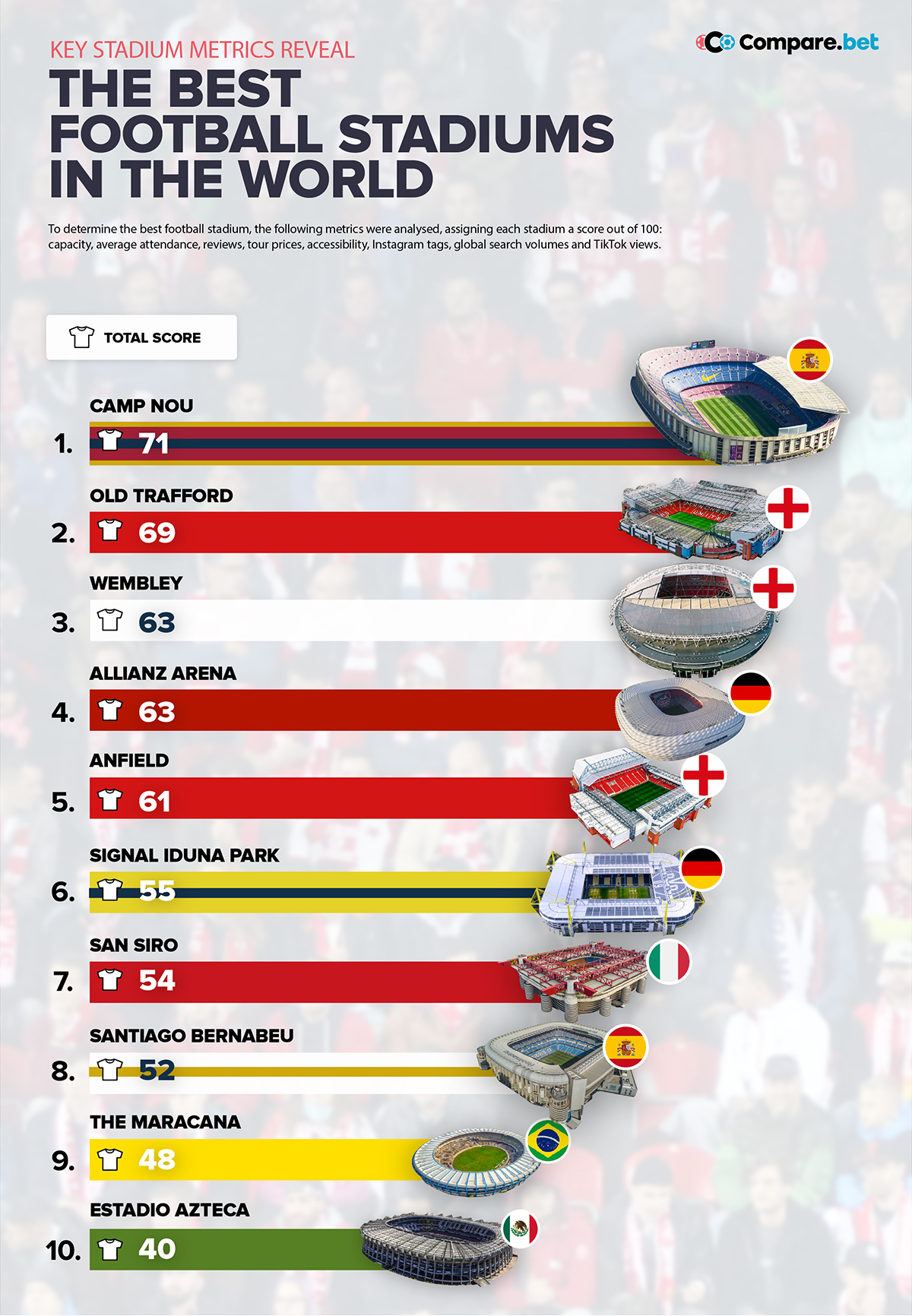 1. Camp Nou, Spain (71/100)
Located in Barcelona, Camp Nou tops our Football Stadium Index and was found to be the best football stadium in the world with an impressive score of 71 out of 100 overall.

The grounds have the highest capacity of the top 15 (99,354 seats), which means legions of fans are able to watch their favourite teams battle it out on the pitch at this stadium. Camp Nou is just as popular on social media too, with our research finding the stadium has 1,940,929 tags on Instagram, and 184,400,000 hashtag views on TikTok – the highest of all stadiums by a long shot.

However, the stadium loses points for having the third most expensive tour price, setting fans back £28.32 per person.

2. Old Trafford, England (69/100)
Old Trafford, home of the Premier League’s Manchester United, comes in at a respectable second place with 69 points out of 100 in our Football Stadium Index.

It seems that a lot of people are interested in this historic stadium as the average attendance is 72,569, global searches for the ground reach 97,000 each month, and the average satisfaction rating sits at 4.64 out of five on Tripadvisor. However, the stadium loses out on points for its pricey tour setting back fans £25 per person, which is among the highest of the football stadiums in the top 15.

3. Wembley, England (63/100)
Wembley stadium is well-known in the UK and around the world, synonymous with championship-deciding games and English cup finals. The stadium comes in third place in our index, scoring 63 points out of 100.

The ground scored points for having the best access for disabled fans and having the third highest capacity (90,000 seats) and the second highest average attendance per match (80,729). Despite this, the grounds lost points when it came to its Tripadvisor score of just 4.33 out of five – one of the lowest out of the top 15.

3. = Allianz Arena, Germany (63/100)
The first of two German entries in the top 15, the Allianz Arena is located in Munich. FC Bayern München – one of the most valuable football brands – calls this stadium home, which draws in about 75,000 people on average for each game. This stadium also comes in joint third with Wembley, scoring 63 points out of 100.

The stadium scored highly for its disabled access and number of global Google searches made on average each month (91,000). However, the stadium lost out on the top spot due to its capacity of 75,024 seats (24,330 less than Camp Nou in first place) and its Tripadvisor rating of 4.46 out of five.

5. Anfield, England (61/100)
The home of Liverpool since their formation in 1892, Anfield has a special place in many football fans’ hearts so they will be pleased to see the stadium rank in fifth and score 61 points in our Football Stadium Index.

Anfield scored highly when it came to social media, as our analysis found the stadium had 1,200,000 Instagram tags and 91 million TikTok hashtag views – the second highest of the top 15 stadiums in our index. The grounds also faired well for disabled access and its Tripadvisor score of 4.71 out of five. However, the stadium dropped points when it came to capacity, as there are just 53,394 seats available for fans to watch a match. This is the second lowest capacity in the top 15.

This stadium picked up the most points for having the highest Tripadvisor rating in the top 15 (4.74 out of five), the lowest official stadium tour cost per person (£11.58), and the highest average attendance with 81,132 spectators watching matches at the ground – 233 less than their capacity of 81,365! However, Signal Iduna Park missed out on points due to their disabled access and the lack of social media posts from fans on Instagram and TikTok.

7. San Siro, Italy (54/100)
San Siro (officially known as Stadio Giuseppe Meazza) is home to A.C. Milan and Internazionale (Inter Milan), and comes in at number seven in our index of the best football stadiums in the world, scoring 54 points out of a possible 100.

According to our analysis, the ground is one of the most popular on social media, with 1,100,000 Instagram tags and 65,900,000 TikTok hashtag views. If you’re a fan of the history of the sport, this stadium is also one of the most affordable to book a tour – just £16.87 for one ticket. However, the stadium is among the worst for accessibility in the top 15.

8. Santiago Bernabeu, Spain (52/100)
The second Spanish entry on the list, Santiago Bernabeu fails to reach the same dizzying heights as Camp Nou, scoring 19 points less with 52 points. Despite this, the stadium is searched for 80,000 times on average each month globally – the fourth highest of the top 15 stadiums in our index.

Although the stadium scored highly for capacity (81,044) and average attendance (66,242), it is the worst of the top 15 for disabled access.

9. The Maracanã, Brazil (48/100)
The Maracanã (which is officially called Estádio Mário Filho) was originally built for the 1950 World Cup as the main venue for the competition. It is the only stadium in Brazil to have made the list which may be surprising to some considering the national team is currently ranked at number 3 by FIFA.

Despite losing points for having the most expensive tour of the top 15 (£34.73) and its disabled access to the stadium, the Maracanã picks up the most points for its impressive 509,000 Instagram tags, and 42,800,000 TikTok hashtag views – the fifth highest of the top 15 in our index.

Despite its size, Estadio Azteca has the lowest average attendance of all stadiums in the top 15, with only 41,527 visitors in spite of its 87,523 capacity – almost half! The stadium doesn’t get much interest online either, with just 32,000 searches per month globally. However the stadium picks up points due to the fact that it offers one of the cheapest tour prices (£8.33) and has a capacity of 87,523 in total – the fourth highest of the top 15.

Despite being a relatively new ground, the stadium has the second highest Tripadvisor score of 4.73 out of five from over 570 reviews, and it’s also one of the most accessible in the top 15, with 331 seats for disabled fans. However, the stadium was let down by the number of social media posts, with just 29,958 tagged posts of the location on Instagram. However, as football resumes following the coronavirus pandemic, this number is bound to increase.

12. La Bombonera, Argentina (37/100)
Alberto J. Armando Stadium is an Argentinian football stadium, which is known as La Bombonera due to its unique shape, scores 37 out of 100 overall in our Football Stadium Index.

La Bombonera is the smallest stadium in the top 15, losing out on points because of having a capacity of just 49,000 and reaching an average attendance of 43,141 per match. However, the stadium picks up points in our index for its low-price tour – where football fans can pay as little as £5.88 – and receiving 425,000 Instagram tags!

13. Soccer City, South Africa (35/100)
Soccer City stadium, located in Johannesburg, goes by a few names – the First National Bank Stadium, FNB Stadium, or The Calabash – and scores 35 points out of a possible 100 overall in our index.

The stadium picks up points for its affordable tour of the ground, costing just £5.13, and having the second highest capacity of the top 15 (94,736 seats). However, the stadium has the lowest Tripadvisor score in our index, with an average rating of 4.16 out of five, and the lowest number of Google searches globally each month (7,100).

14. Celtic Park, Scotland (29/100)
Celtic Park, located in Scotland, is the largest football stadium in the country with a capacity of 60,411. Our Football Stadium Index awarded the Scottish stadium a score of 29 out of 100.

Football fans seem to be quite fond of this location as it gained an impressive rating of 4.67 out of five on Tripadvisor, and one of the lowest tour prices (£13.50), resulting in high points being awarded in our Index. However, Celtic Park lost points when it came to accessibility and the number of Google searches made globally on average each month – just 11,000.

This location received mostly low scores across the board, however the stadium earned the most points for 41,000 global Google searches per month on average, and for having a total of 68,456 seats in the grounds.

Which countries are home to the best stadiums in the world? 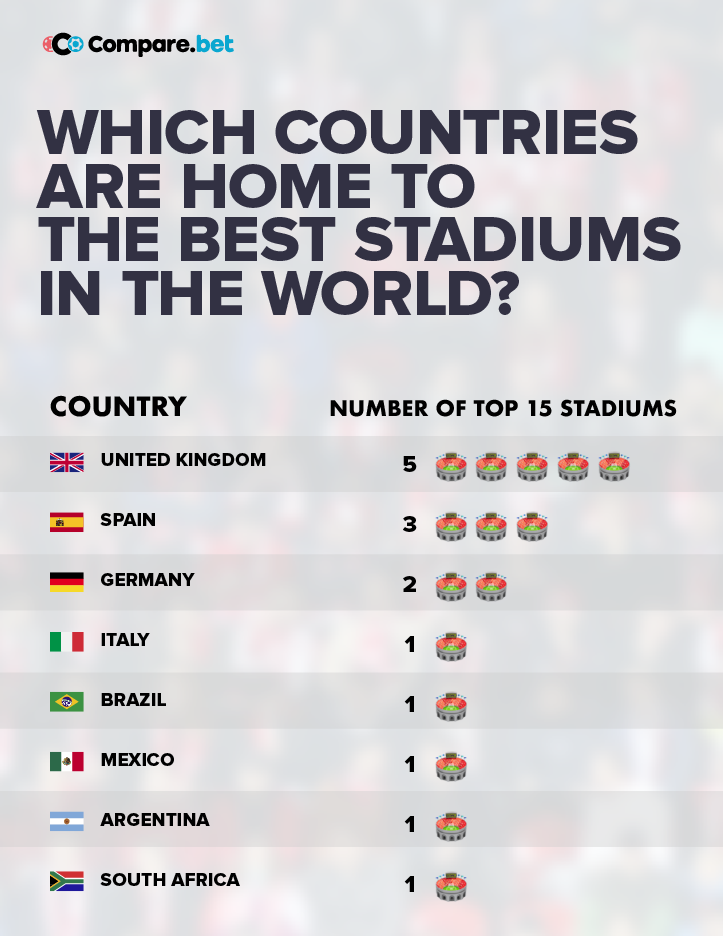 The beautiful game is so popular to watch and play in the UK, so it should come as no surprise that the country is home to some of the very best football stadiums in the world. In fact, the UK is home to five of the top 15 football stadiums globally – four in England and one in Scotland.

Spain follows close behind with three stadiums (Camp Nou, Santiago Bernabeu, and Wanda Metropolitano), and Germany takes third place by providing two of the top 15 greatest stadiums in the world.