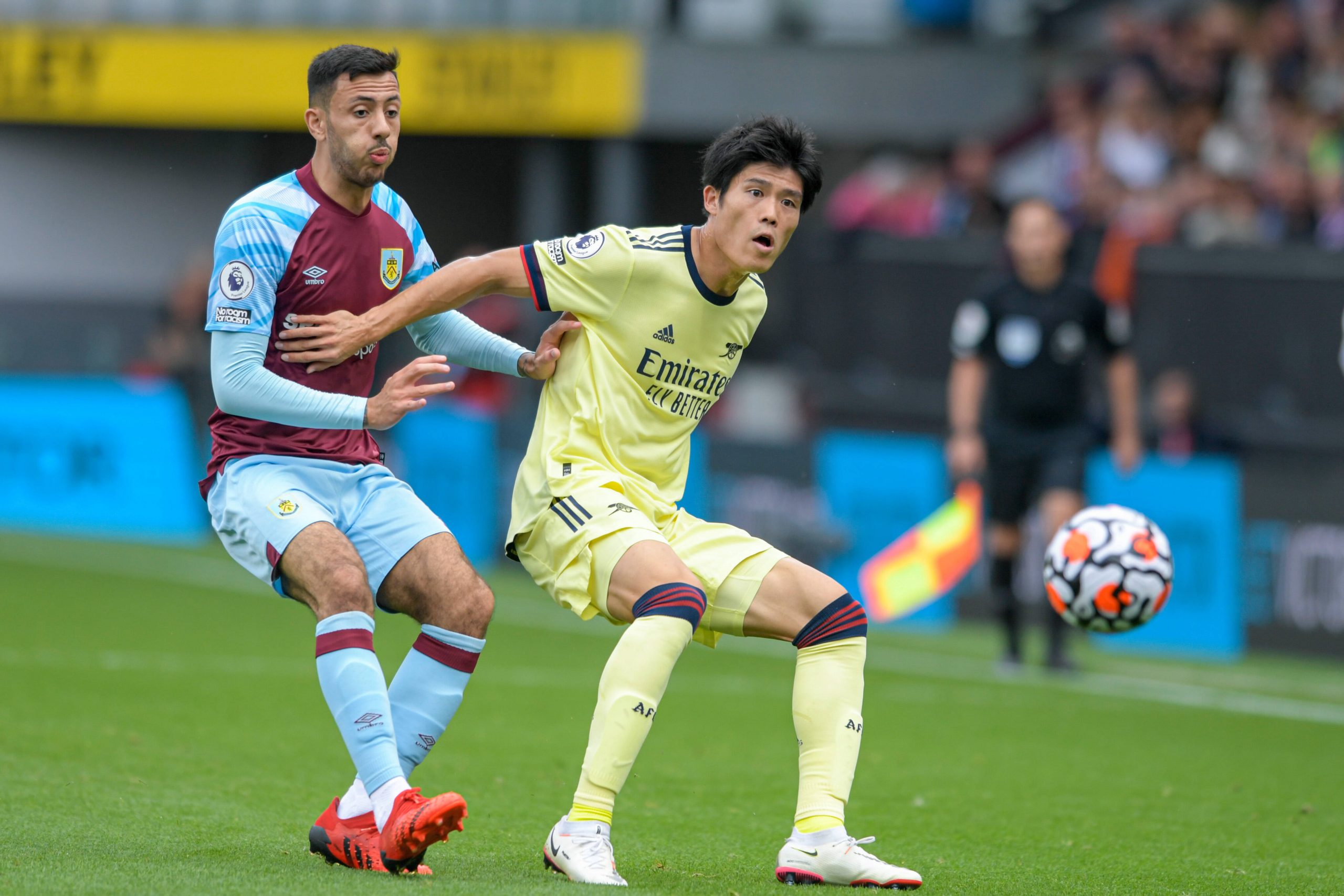 Sunday’s North London derby presented a vision of what Mikel Arteta’s Arsenal could be. Indeed, the Gunners were complete in their performance as they swept aside Tottenham Hotspur in a 3-1 victory that saw Pierre-Emerick Aubameyang, Martin Odegaard, Bukayo Saka and Emile Smith Rowe shine. The important contribution of Arsenal’s unheralded right back shouldn’t be overlooked, though.

Signed from Bologna for a fee of £16m on deadline day, Takehiro Tomiyasu’s arrival at the Emirates Stadium largely flew under the radar of most. The Japanese international was an unknown to the majority of fans, but they are now seeing why Arsenal were so keen to lure him to the club.

Against Spurs, Tomiyasu more than proved his worth. He had more touches of the ball (67) and made more ball recoveries (eight) than any other Arsenal player. He made three clearances and two crosses, demonstrating his ability on both the defensive and attacking side of the ball. Remarkably, Tomiyasu has yet to be dribbled past once in three Premier League outings.

Takehiro Tomiyasu in the Premier League:

An excellent start to his Arsenal career. 🇯🇵 pic.twitter.com/WIBZAx1Al8

Arteta’s Arsenal approach demands that his players be many things all at once. His centre backs have to be physically strong while also able to play the ball out from the back. His central midfielders have to have the positional discipline to maintain their structure, but also have the intensity to press high. His forwards have to drop deep to play their role in build-up, but also spin in behind to stretch the pitch.

This goes some way to explaining why Tomiyasu was targeted. The Japanese international has the defensive nous to keep Arsenal strong at the back, but also has the instinct to get forward and help out in an attacking sense when required. He is proving himself as the perfect right back for Arteta’s Arsenal.

At left back, the Gunners have Kieran Tierney to drive forward. The Scotland international is one of the Premier League’s best ball carriers and this opens up a number of possibilities for Arteta, who likes to see Tierney burst to the byline. The deployment of Smith Rowe, who prefers to cut inside and link up with central team-mates like Odegaard, gives Tierney the space to do this.

However, the dynamic is somewhat different on the right side of the Arsenal team. On that flank, Arteta has two wide men who like to stay wide in the form of Nicolas Pepe and Saka. Therefore, there is less of a need for the right back on that side to overlap and more of a need for that player to provide some security to stop Arsenal from being vulnerable out of possession. This is where Tomiyasu comes in.

Takehiro Tomiyasu had more touches (67) and made more ball recoveries (8) than any other Arsenal player against Tottenham.

He is yet to be dribbled past by an opponent in the Premier League this season. pic.twitter.com/hKY5AqxUVq

Capable of playing in central defence, Tomiyasu’s versatility might also come in handy over the course of the season. This adaptability means Arteta has the option of switching to a back three if the situation requires it — Tomiyasu would be comfortable on the right side of a central defensive trio or in the wing back role.

In many ways, Tomiyasu embodies everything Arsenal want to be in the Arteta era. His signing was a shrewd piece of business that was the result of strong scouting and a solid recruitment process. The Japanese international wasn’t signed because he was a big name or because his arrival at the Emirates Stadium would appease fans, but because he fits Arteta’s system.

“I wanted to play at a higher level, so I am so grateful to be given this chance by Arsenal. I just could not believe it when I found out,” Tomiyasu explained when asked how his transfer to North London happened. “I was very excited as soon as I knew. I didn’t need to call anyone or speak to anyone for advice. It was an easy choice for me, because, well, because it’s Arsenal. I didn’t even have time to speak to the manager before signing the contract, and I didn’t need to. I wanted to come.”

Arteta now looks to have the structure of his first team in place, of which Tomiyasu appears to be a central part. The problem is Arsenal still don’t have the squad depth of many of their rivals. When injuries or suspensions hit, or when Arteta needs to rotate to keep his side fresh over the course of the season, the Gunners might not be able to keep their performance levels so high.

Calum Chambers, for instance, isn’t able to do what Tomiyasu does while Hector Bellerin is now on loan at Real Betis for the duration of the season. Ainsley Maitland-Niles might be Arteta’s best bet as a depth option at right back, but the 24-year-old has been rather vocal in his desire to leave the Emirates Stadium in search of more game time.

🏆 Your MOTM from last night's win…

The challenge for Arsenal will be to replicate the early success they have had with the signing of Tomiyasu across the rest of their squad. Through Aaron Ramsdale, Ben White, Gabriel Magalhaes, Thomas, Odegaard and Smith Rowe, it seems they might now have a core to build around, but they will need more options to claw their way back up the English and European game. Compare the strength of the squads in the Premier League’s top four to Arsenal’s current crop.

Arsenal still have a long way to go before they can call the appointment of Arteta a success. After all, they have only won three of their six Premier League fixtures this season. Even after the impressive North London derby win over Tottenham, they sit behind Brentford, Aston Villa, West Ham, Brighton and Everton in the table.

But players like Tomiyasu have helped the Gunners turn a corner in their development. The club finally looks to be heading in the right direction again and the Japanese international could empower Arteta to follow through with his rebuild. The Spaniard can now point to Tomiyasu as evidence of the good he’s doing for Arsenal.