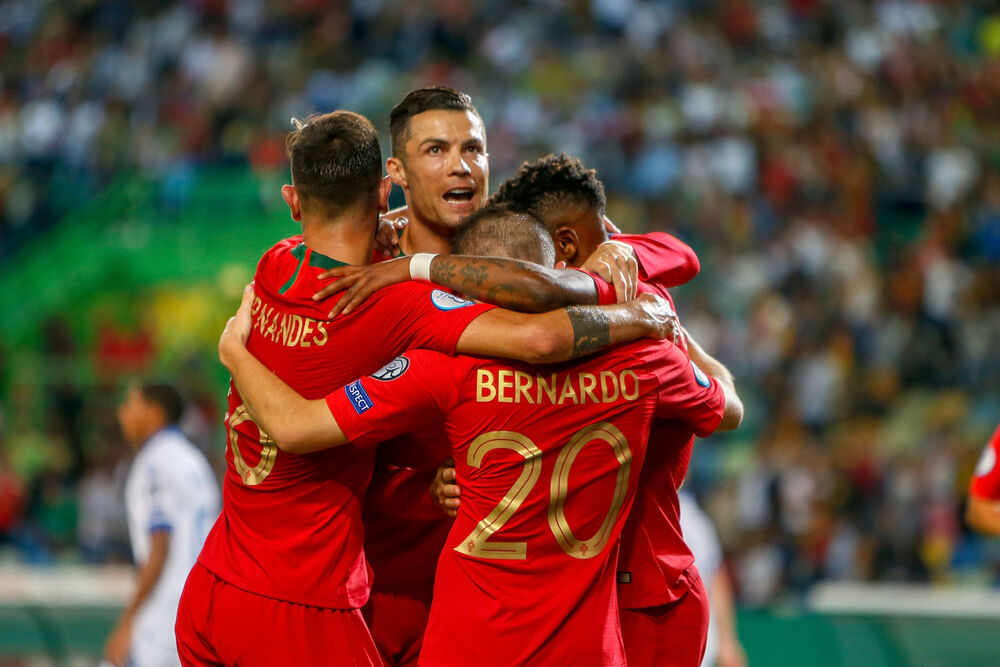 You won’t be able to see if live on TV (legally) but Saturday should be a momentous day in the life of Manchester United as they welcome back Cristiano Ronaldo for a famous homecoming.

I’m not sure I agree with the call for this game to have been switched to allow people to watch it live — we’ll see plenty of Ronaldo this season and the cameras will record every second of it for us.

Ole Gunnar Solskjaer must be tempted to throw him right into the starting line-up but the prudent option would be to stick him on the bench and give him half an hour or so in a game United should already have enough to win.

Signing Ronaldo was a huge move for United. Yes, it may have come out of necessity and the perfect storm of the Glazers needing to get into the fans’ good books and the prospects of him heading across Manchester to City, but nevertheless the fans have got their cult hero back.

Head to our website or app now to relive our 6-0 win over Newcastle, which included a hat-trick from a certain someone 😉🇵🇹#MUFC

Plenty has been written about it, and what it means to the standing of the club both on and off the field around the world — and it shows that for all their wealth, Man City still have some catching up to do in terms of their global standing in the football world.

City were basically used by Ronaldo’s people to draw out Man Utd — that move will not have gone down well at the Etihad.

What does need looking at now is just when and how Solskjaer will use Ronaldo in the coming season, and how it changes their chances, and expectations, of winning silverware this year.

Where will Ronaldo play for Man Utd this year?

There has been some talk of him fitting into a wide forward position on the left or something similar on the right, but I think this is a relatively straightforward decision for Solskjaer.

If you have the greatest pure goalscorer of a generation and the record-holder at international, Champions League and European Championship level, then you play him up front — you do everything you can to allow him to score goals.

And with the likes of Jadon Sancho, Bruno Fernandes, Paul Pogba and Luke Shaw all providing terrific service into the box, Ronaldo’s fearsome heading ability could just be their greatest weapon this season. As he showed against Ireland, he’s almost unstoppable if he gets a run and can use that unhuman leaping ability.

The slightly trickier task for Solskjaer is just who he plays in his supporting cast and in what formation. A 4-2-3-1 is favoured with Fernandes behind Ronaldo, Sancho on the right and possibly Pogba on the left — as the Frenchman probably wouldn’t be trusted in a midfield two.

In a 4-3-3, he can get Pogba into the team on the left of midfield but then has to switch Fernandes to a wide forward role opposite Sancho presumably.

How will Ronaldo’s arrival impact other Man Utd players?

Most of the Man Utd squad are young enough to have grown up watching Ronaldo rampaging down the wing at Old Trafford, and as the multitude of gushing social media posts proved, they’re all thrilled to have him back.

Training with and just being around the ultimate professional, the man who lives his life dedicated to his craft, can only be a big benefit for those players — the confidence boost of him just being around should improve performance levels.

And everyone will want to raise their games when playing with Ronaldo.

There is a but though, as competition for attacking places at Man Utd was already fierce, and with Ronaldo, Sancho, Fernandes and Pogba must-starts, where do the rest fit in?

That foursome does sound tasty indeed, but it doesn’t look too good for the prospects of Edinson Cavani, Anthony Martial, Marcus Rashford and Mason Greenwood. They’ll get their games but they’ll never be first choice.

Now this can work both ways — Ronaldo doesn’t play every game and Solskjaer rotates to keep everyone happy, young players improve from playing and training with an icon and everyone’s a winner.

But football being football, and with a World Cup next winter, some players may just start to get a bit restless if they’re not playing all the time.

Will Ronaldo win Player of the Year or the Golden Boot?

He’s favourite to win the PFA award (5/1) and second favourite (9/2) to win the Golden Boot, and while everyone seems to be jumping on those bandwagons, I’d just be a bit more cautious for now.

The PFA award you can absolutely see him winning as, although many seem to forget when they inevitably criticise the winner, it’s voted for by the players — and quite a lot of these players idolise the Portuguese superstar.

All eyes will be on him, every towering header, fierce free-kick, clever assist, stepover and backheel he produces will be shown on repeat and flood onto social media. Players will soak all this in, and even the ones who don’t get to play against him will probably vote for him.

He’ll be a one-man highlight reel and that 5/1 will not last if he has a fast start to his second coming at United.

I’d certainly rather take that price than the shorter one on his Golden Boot chances, despite him now being a pure goal-scoring machine who once hit 31 goals in a season at United. That season was an outlier as he only bagged 18 and 17 in the season’s either side.

He’ll need something in the region of 23 goals, maybe more, to win it given recent seasons, and he’s already a couple behind Mohamed Salah and three behind team-mates Mason Greenwood and Bruno Fernandes.

Cristiano Ronaldo: "People speak about the age but they should know I'm different. I am different. I'm different than the rest of the people. I show off all the time year by year and this year will be the same." #mulive [mu]

Romelu Lukaku is flying, and the betting favourite, Harry Kane is yet to get off the mark but will surely get yet another 20-goal haul and is also on all the penalties, as is Salah, and that’s one question for Solskjaer to answer — whether Ronaldo takes up spot-kick duties from Fernandes or not.

The same goes for free-kicks, and you feel it’s something Solskjaer would have to set down early doors to avoid any unnecessary confusion. It’s hard to see Ole telling Ronaldo he can’t take a free-kick or penalty though!

But, the main factor for not backing Ronaldo here is that, although he could slam in goals from all angles, I’m not so sure he’s going to play every league game — especially games United should be winning and could easily win with Cavani, Rashford or Greenwood taking his place.

Look, Ronaldo is still in great shape, he still looks like a Greek God carved out of Portuguese marble, but he is 36, and he’s been signed to not just win trophies, but win the big trophies. He’s here to bring the Premier League and Champions League back to Old Trafford.

He’s the big difference-maker in the biggest games. Finishing second in the league, losing cup finals, going out of the Champions League — Ronaldo is here to score the goals that will turn those near-misses into silverware.

So, would he be risked for every game in the busy Festive period for instance, when United have a very kind fixture list facing the likes of Norwich, Brentford, Brighton, Newcastle, Burnley and Wolves? He surely doesn’t need to play all six of those in 20 days.

United also have a friendly Champions League group so should qualify with ease, and they face Southampton, Leeds and Watford before and after the last-16 ties. He won’t be needed in two of those league games.

As a big-game specialist, there’s a doubt if he’ll get enough ‘easy’ games to score the goals needed.

Will Ronaldo signing be bad for Bruno Fernandes?

The hope, of course. is that Fernandes, Pogba, Sancho and Ronaldo settle in perfectly and become one of the most devastating attacks in world football, let alone the Premier League. And they’re well capable.

Along with the drop in production for Fernandes from set pieces though, there’s just a niggle that Ronaldo could drive Fernandes into his shell, as is the case in the Portugal team, where Fernandes is a shadow of the influential star he is at United.

Cristiano Ronaldo has scored 46 goals in his last 44 games for Portugal.🔥 pic.twitter.com/RyXsDCyvs3

He won’t be the main man anymore at Old Trafford, and with his national team he plays less, scores less and assists less than he does back in Manchester.

Fernandes rarely plays 90 minutes for his country, and scored just his fifth goal in 36 internationals when, ironically, he slotted a penalty during the international break, before adding just his fourth assist in the second game — both played without the suspended Ronaldo.

There should be a great connection, of course, but Solskjaer just has to keep an eye out for Fernandes drifting to the periphery of things and into the giant shadow Ronaldo projects onto any football pitch he walks onto.

Is it now win or bust for Solskjaer with Ronaldo?

He’s smiling now, and why wouldn’t you if you were Ole Gunnar Solskjaer who has been given fantastic backing in the transfer market to the tune of £440m during his two-and-a-half years in charge, with it all topped off this summer with big money moves for Sancho and Varane.

Throw in the wage demands of Ronaldo and you’ve got another huge outlay — but with that brings a pressure to finally bring in some silverware.

Solskjaer had a good enough squad to win things last season in truth, and he’s still got plenty of convincing to do with the fans that he can match the Guardiolas, Tuchels and the Klopps of this world, but this year he has no excuses.

He’s played the underdog card, played in a counter-attacking style that has brought some success against the big sides but ultimately hasn’t been able to get over the line.

They now have a squad to match the best. You could put it up against any in the Premier League now so the mentality must change, they must be the favourites, they must go out and dominate games and they must ultimately go out and win.

Ronaldo has brought hope, desire and a will to win with him, but he’s also brought massive expectations — but it’ll be down to Solskjaer to deliver and he’ll be the man to pay the price if they come up short again.