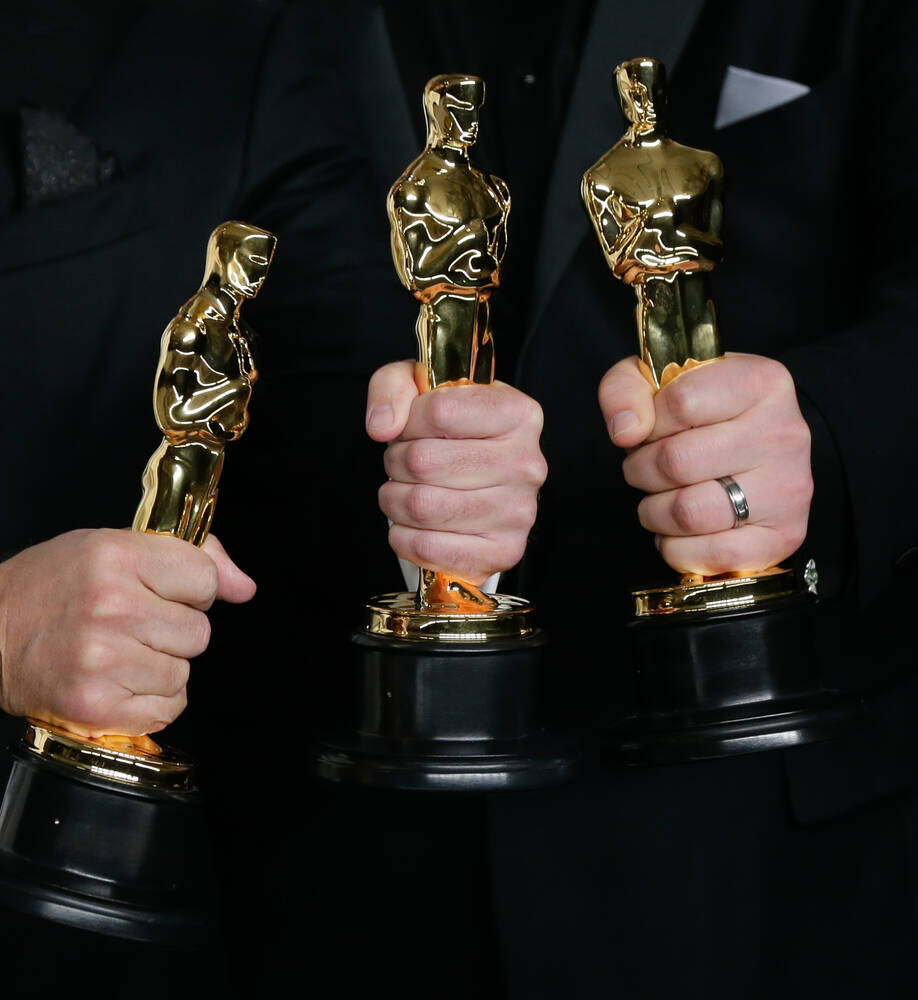 Nominations for the 93rd Academy Awards (more famously known as The Oscars) were announced today, and we’ve analysed the latest odds to see who the bookies are backing now the nominees are confirmed.

The announcement of the nominees on Monday didn’t see a new frontrunner emerge, but rather Nomadland consolidate its position, rising by 6.7 percentage points to become the clear favourite at 72.1% (-258). This movement could be explained by punters backing off The Trial of the Chicago 7 which saw its chances fall by 7.3% from last week. Movement across the other candidates was minimal — the takeaway from today’s announcement seems to be even more punters leaving the challenger for the leader of the pack.

Cholé Zhao’s fourth film may not be available in the UK yet, but it has received rave reviews following its US release in February. Telling the story of Fern (Frances McDormand), who was made homeless in 2011 by the Great Recession, critics have been totally enamoured by the inspirational tale of resilience. As such, it stands out as the favourite to win Best Picture, boasting a combined probability of 72.1% chance of winning. The best odds for Nomadland to pick up the award are at Sky Bet, where you can wager on odds of 1/2. Should the film win it would be McDormand’s third and Zhao’s first.

The Trial of the Chicago 7

The Trial of the Chicago 7 received enormous critical and commercial success over 2020 following its release on Netflix. All about the trial of a group of anti-Vietnam War demonstrators in 1968, the film features a star-studded cast boasting the likes of Sacha Baron Cohen, Joseph Gordon-Levitt and Eddie Redmane amongst its ranks. Aaron Sorkin’s creation claims a 21.7% combined probability of winning, with the best odds of 5/1 offered by Unibet.

Perhaps the most heart-warming film on the nominated for Best Picture, Minari tells the tale of a Korean-American family who move to an Arkansas farm and the challenges they face along the way. 2021 is the first year director, Lee Isaac Chung, has been nominated for an Academy Award, but his hopes of claiming the prize are slim. With just a 8.8% combined probability of winning, Chung may have to wait another year for the coveted award.

David Fincher’s (Seven, Fight Club, The Curious Case of Benjamin Button) biographical film on Herman J. Mankiewicz is about the famous writer and his equally infamous film, Citizen Kane. With the likes of Gary Oldman, Amanda Seyfried and Lily Collins all amongst the cast, Mank is sure to be in with a chance of winning. Although, with only a 7.7% chance of claiming the prize, Fincher’s homage to the legend of the silver screen is certainly not the favourite.

Emerald Fennell, who also played Camilla Parker Bowles in The Crown, stands an outside chance of claiming the award for Best Picture for her enthralling Promising Young Woman, starring Carey Mulligan, which tells the story of a woman who is seeking revenge on the murderer of her school friend. The odds are still long for Fennell to claim the top prize, with odds of 33/1 offered by Sky Bet the best around. As such, the film has a combined probability of 6.1% of winning.

Judas and the Black Messiah

The story of an undercover operative infiltrating the Black Panther Movement (starring Daniel Kaluuya and Lakeith Stanfield) has made Judas and the Black Messiah one of the most talked-about films of the year so far, so its nomination for Best Picture comes as no surprise. Odds are still long for director Shaka King to take the award home, with Sky Bet offering odds of 33/1. As such, the combined probability for a shock win stands at a pretty small 4.9%.

Darius Marder’s The Sound of Metal, with the leading role provided by Riz Ahmed, has earned the director his first Oscar nomination. The intimate film of a heavy metal drummer who learns to cope with the loss of his hearing touched many film-goers as well as critics when it arrived in 2019. It’s odds to claim the prize for best picture are long, however, with PaddyPower, William Hill, Unibet and MansionBet offering the best value odds for a victory of 50/1. The combined odds that Marder’s intimate film will take the gong are a lowly 2.5%.

The Father, starring Sir Anthony Hopkins and Olivia Coleman, is the least favoured of the nine nominations for Best Film, going into the night with combined odds of just 2.4%. Nonetheless, Florian Zeller’s sensitive depiction of an old man coping with memory loss had filmgoers and critics enraptured in equal measure, and the best odds for victory can be found at PaddyPower, William Hill and Boyle Sports where a win is priced at 66/1.

Monday’s confirmation of the nominees didn’t bring any substantial movements to the chances of Best Actor. Chadwick Boseman’s position as runaway favourite has only strengthened, and he seems destined to become the second-ever posthumous winner of Best Actor, preceded only by Peter Finch for Network. Longshot British hopefuls Sir Anthony Hopkins and Riz Ahmed did see a slight bump in their favour, whilst Gary Oldman’s already slim chances took a slight decline. History maker Steven Yeun was largely off the bookies radar prior to today – The Walking Dead star enters the fray just ahead of Oldman, but it’s tough to look beyond Boseman for this one.

Chadwick Boseman’s performance in Ma Rainey’s Black Bottom took on special significance after the actor’s death in 2020, and the power and personality with which he played the role of Levee Green has made him the out and out favourite to claim a posthumous Best Actor award at combined odds of 93.1%. He is the fourth performer to earn a posthumous nomination for Best Actor, joining the illustrious company of James Dean, Peter Finch, Spencer Tracy and Massimo Troisi.

Sir Anthony Hopkins performance in The Father has been awarded a nomination for Best Actor. It is the sixth time he has been nominated for an Academy Award, but he has only ever claimed one, back in 1992 for his performance The Silence of the Lambs. His role in this far slower and heartfelt film sees him go into the ceremony with combined odds of 12.1% to win the award, second favourite behind Chadwick Boseman.

Riz Ahmed’s portrayal of a heavy metal drummer who loses his hearing in The Sound of Metal has earned him his first Academy Award nomination and Britain’s second out of three for the category. The best price you’ll find for the London-born actor to claim the prize can be found at PaddyPower, Betfair and MansionBet where odds of 12/1 are currently on offer. In all, his combined odds of winning on the night are 8.1%.

Steven Yuen makes history by being nominated for an Academy Award, becoming the first Asian American to receive the nod in the lead actor category. His portrayal of a father who moves his family to Arkansas in the 1980s was touching in the extreme, but combined odds of just 5.1% to win are pretty long in comparison to the competition.

Gary Oldman has claimed one Academy Award in his career for his portrayal of Winston Churchill in Darkest Hour, but his performance of Herman J. Mankiewicz is his third career nomination. He stands a pretty slim chance of winning, however, with combined odds of just 4.2% to win.

The announcement for nominees in the Best Actress category brought with them limited movement for the leaders of the Best Actress betting market. Carey Mulligan remains in pole position for her performance in Promising Young Woman, consolidating her status at the top by advancing 3.1% (-121) over the space of a week, while her nearest challenger, Andra Day, moves down 0.9% (+305). Where there was some significant change was towards the bottom. Vanessa Kirby shot up 5.6% to +630 from this time last week, overtaking Viola Davis who herself fell 8.1% to +910 at the back of the pack.

Carey Mulligan’s considered but striking performance in Promising Young Woman earns her a third Oscar nomination for the Best Actress category. She is the favourite to win the award this year, however, boasting combined odds of 54.8%. The best odds for the English actress to take home the award are at PaddyPower, Betfair and BoyleSports where Mulligan is priced at 10/11.

Andra Day receives a nomination for Best Actress for her role as the famous American singer, Billie Holiday, in Billie Holiday vs. The World. She boasts a pretty strong chance of walking away as the winner, with combined odds of 23.8%.

Frances McDormand’s exceptional performance in Nomadland earns her a sixth Academy Award nomination, and should she win, it will be her third victory in the Best Actress category. She stands a solid chance of claiming the award too, coming into the ceremony with a combined probability of winning of 18.6%.

Vanessa Kirby (The Crown) picks up her first Oscar nomination for her role in the moving Pieces of a Woman. Kornél Mundruczó’s touching portrayal of a woman dealing with the impact of a homebirth gone wrong received favourable reviews and Kirby’s powerful performance earns odds of 6/1 at MansionBet, Paddy Power and Betfair. As such, the second English actress in this category goes into the night with a combined odds of 13.7%.

Viola Davis’ Best Actress nomination for her performance as the titular role in May Rainey’s Black Bottom was a moment in history, as she became the most nominated black actress of all time and the only black woman with two Best Actress nominations. She is, however, the least favoured of the five nominated actresses, boasting a combined probability of just 9.9%.

Our researchers have been monitoring the available daily odds on candidates for Best Picture, Best Actor and Best Actress from a number of UK-based betting operators:

Using our odds converter tool, we determined the implied probability of the fractional odds available at these operators, and then determined the average percentage for each nominee, beginning on March 10th (operator data was limited for Steven Yuen and Sound of Metal prior to today).